If you don't know, Geoff has been working a lot. He works all day, late at night, weekends. He works holidays and birthdays. He works when he's sick. Heck, he even works when he's healthy. On nights when he's home by 9 p.m., we say, "He's home early!" If he takes a few hours off on a Saturday, we celebrate the "break." There was a big work meeting on Friday. Geoff rushed out the door around 7:30 in the morning, so he wouldn't be late. Later, he called me. Geoff said it was a *Come to Jesus* meeting; they want everyone to work harder for another month. No more slacking off etc, etc... Huge Deadline. Team Effort. Blah, blah, blah.

What can I say? I guess I mean, what can I print and still retain your respect?

Both Alex and Max turned in book reports yesterday. Alex read a book about World War II and a Japanese family living in Hawaii. It was his first formal, typed up, formatted school report. He did very well. He was asked to include illustrations, which was probably his favorite part. Max had to include a project with his book report. He read his first grade level, long words and paragraphs book ever. It was about Balto, the dog that saved Nome, Alaska, and inspired The Iditarod. He was really taken with Alaska, the wilderness and adventure. He made a diorama of a snow drifted wilderness, with a map showing the route taken by the sled dogs. Good work from both boys. I am recalling the relief and satisfaction of having a school project completed and turned in.

William is jumping in to some algebra now, and he's also studying communicable diseases and cell function. William reads a lot. He reads about many subjects and from many sources. I think I should get him writing some more. He has very good discussions with me and he understands his course material. Writing practice will help him recognize his comprehension skills and improve his ability to communicate what he knows.

Me? I woke up with wanderlust. I could drive to Pasadena and sit with Grandmother, play some Scrabble, take her to dinner. I could take the children up to the mountains, a trip I used to make often and happily. We could hike around, stop at feed stores, visit goats and hope for a snowstorm. We could turn our backs on school and chores, pack the Green Goose and head out on the big highway. We could stop at diners and museums, campgrounds with interpretive centers and hands-on activities. I may go to our old neighborhood, the one before the Treehouse, and we could buy conchas, look for chicks, visit thrift shops and maybe drive by El Rancho to sneak a peak at our old home, see how much the trees have grown. Melancholy sigh. There can't be much satisfaction in grocery shopping and filling the car with gas, but I fear that is about all I will accomplish today. Why do I like to run away, to open a map and trace the contours of country roads? And on every trip I reach a point where the only place I want to be is back where I started.
Posted by Natalie, the Chickenblogger at Saturday, January 27, 2007 0 comments

I've noticed that if I relax and just begin to enjoy the moment, an alarm sounds and my cells and mind jolt. The urgency of knowing that I am on call 24/7 keeps me hopping so constantly that my response to relaxing has become panic. I need to be somewhere, doing something, caring for someone. My showers are a wet race, meant only to remove the day's funk. I cannot soak in the steam, absorb the fragrant suds. My meals are taken standing or walking out the door. We do make time to share dinner, occasionally, but it still manages to be a hectic affair.

I know I am not the only one with these issues. I'm merely observing my personal experiences. I like my job, but even a good thing can get overwhelming, like too much cake. The other day I thought my mind would implode if anyone asked me one more question. It was after nine o'clock and Geoff had just got home. Max needed to show me something. Alex was explaining where I failed to understand the alegbra homework. Geoff was asking about mail he was expecting, (or was it something about a housing market article?) Maria wanted to dance with everyone. She was pulling William, Geoff and me off our seats to dance to "Mr. Sun," again. Everyone's needs were so urgent...

Hey, you know what I need? A vacation. Not a trip, which is "chaos on the road" or "laundry in another town." I need services, fresh towels, menus. I need an entertaining, engaging children's program, where healthy snacks are served. I need a bromine pool, at least one massage and a bed big enough to handle two adults and any/all four children with nightmares or bedtime books that need reading. Let's include scenic hikes, snorkeling, redwoods, unique boutiques, world class museums, live music and entertainment. Let's not get bogged down by details... hey, I think I am ready to make an altar. Ahh! What time is it? I gotta go.
Posted by Natalie, the Chickenblogger at Friday, January 26, 2007 0 comments

Email ThisBlogThis!Share to TwitterShare to FacebookShare to Pinterest
Labels: What I Think 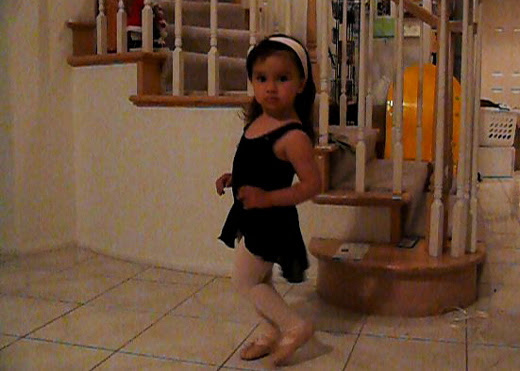 Mom, this one is for you, since the image didn't open in your email.
30 minutes in a Mommy and Me dance class and Maria was completely gone! She learned new moves, which she happily demonstrated for her brothers and again for her father. We are dazzled!
Posted by Natalie, the Chickenblogger at Thursday, January 25, 2007 0 comments

Email ThisBlogThis!Share to TwitterShare to FacebookShare to Pinterest
Labels: Talent

What are you going to do for your birthday?
*Whatever I feel like I wanna do, gosh!* 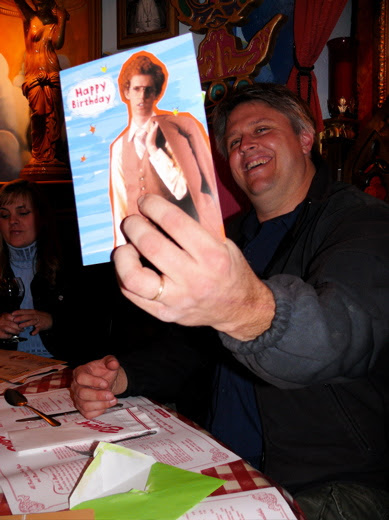 Well, maybe not "whatever" he feels like doing. He still has to show up at the office; see what they know.

But when he gets home we are going to treat him to some grilled turkey burgers, fresh strawberries and a geek film festival. His celebration started early, when we had dinner with Holly, Izzy, Nick, Rich, Marie, Deanne and James at Buca, and I think we'll just keep on celebrating right through next week. Gracious!
Posted by Natalie, the Chickenblogger at Tuesday, January 23, 2007 0 comments

Time for a little randomness. So, for Christmas I got a new camera, which is wonderful. My dear and first digital camera gave me at least 16,000 images... not counting the many I deleted. Poor camera was so good, but it was definitely falling apart. Moment of silence. Okay, the new camera is large and fancy and takes amazing photographs and video. And the new camera is also complicated and new, and complicated (probably because it's new.) I went through this technology crisis with my first camera, so I know it can be overcome. It's a process. Eventually I will even read the owner's manual.

I bought a wall calendar.

So, let's take a look at some of the pictures from the new camera... 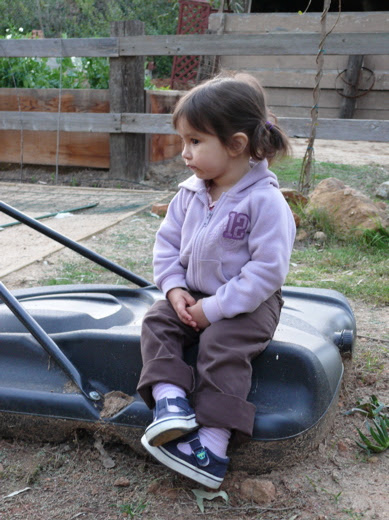 We had a lunch date with Alex's friend, Mitchell and his family. After lunch we hung out in their yard and garden. Here's Maria watching the boys play basketball. 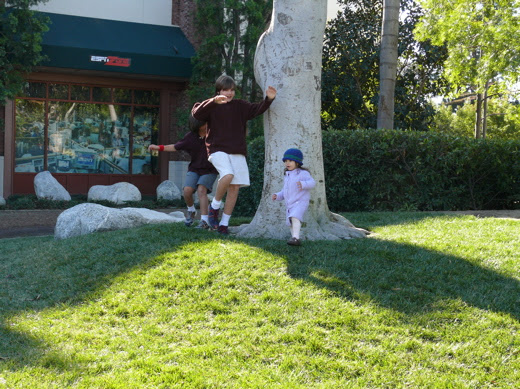 Last week I made a huge planning error, but the children made the best of things. We let Maria direct us in a game of chase around the tree. 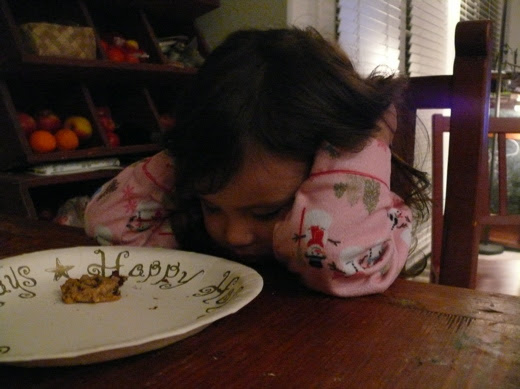 I baked some cookies and Maria nibbled at her's in her dainty fashion, but sleepiness came before the cookie was done.
Posted by Natalie, the Chickenblogger at Monday, January 22, 2007 0 comments