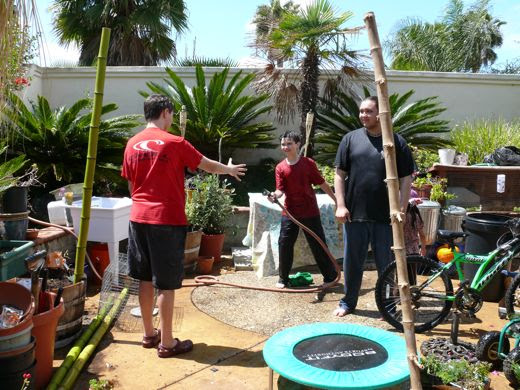 Remember last year? Alex and I had a memory chuckle over the croissants I burned... actually it was more like a kitchen fire than just well-done buns. This year the croissants are golden and light. I was sighing because it's hard to believe he is fifteen years old and because I am dizzy with good memories, happy recollections of life with this boy. Sigh. He deserves a lot more than unburned croissants! Which is why this post has got to be short and sweet... there's so much to do!

Alex is great. Really great. I've said it before and it's as true as ever. 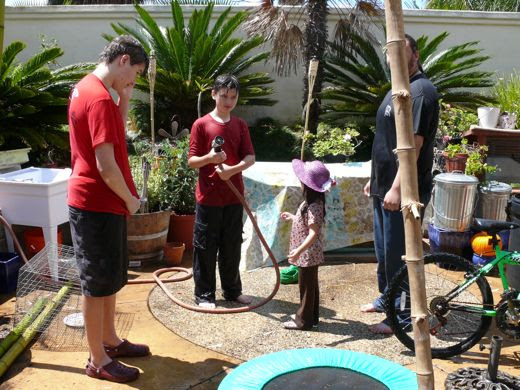 I just came from the high school. Maria and I took a huge cake to share with students and staff... that was a big hit. The principal led everyone in a warm and sweet round of "Happy Birthday." I could not be more eager for summer to begin, but today I realized how much I like their school... I am going to miss all those great people.

On Sunday we are going to do something. A cookout. Light some tiki torches. Ruth is making Alex strawberry rhubarb crisp. As you can see, we are limited by space when it comes to backyard activities... not that it keeps us from having any fun at all, but it has occurred to me that we do not even have an outdoor table. Maybe we will have a cookout and an eat in. Of course, inside we don't have much in the way of chairs... lol. 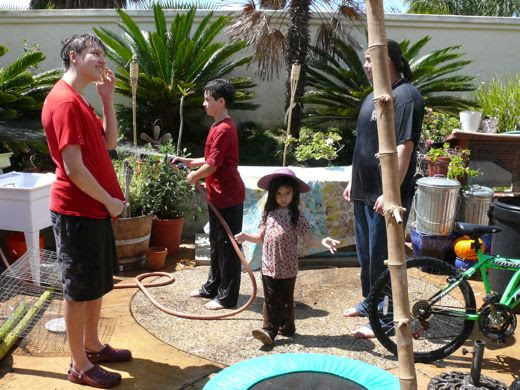 Maybe we should consider In-N-Out. Take it down to the beach. 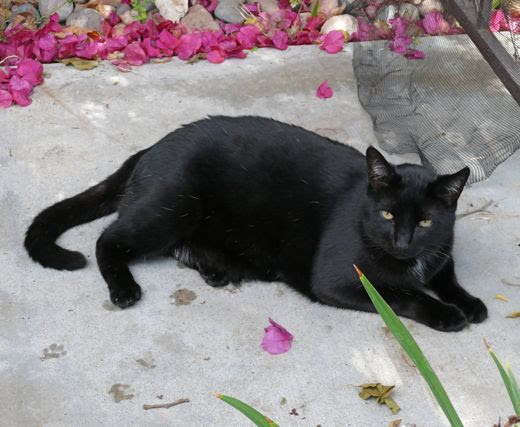 Chango would vote for a backyard party, without the hose play. Alex gets the deciding vote.
Posted by Natalie, the Chickenblogger at Friday, June 12, 2009 6 comments 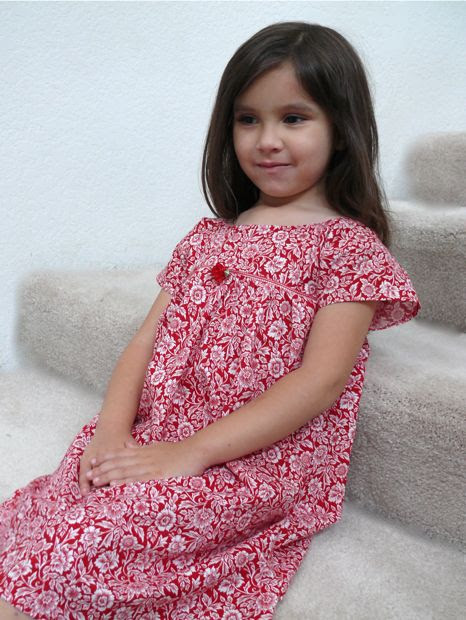 I can think of a lot of ways to waste time and/or procrastinate, but my all time favorite way to postpone the inevitable is with a needle and thread. Or a camera. 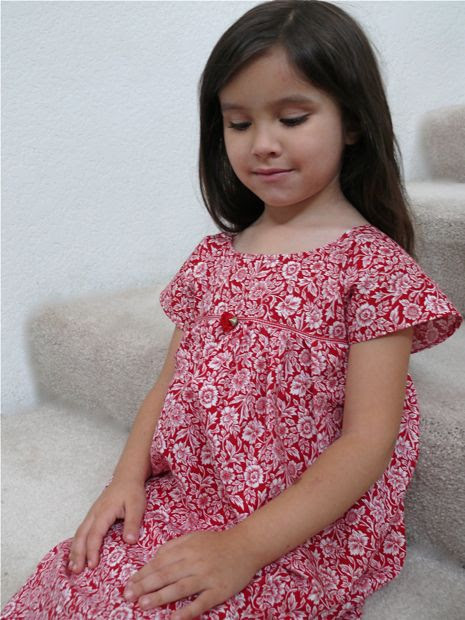 I got it in my head that our family trip, Chickens Abroad, calls for a particular kind of wardrobe... summer cool and light, for comfort, and also to dry easily when doing hotel room laundry. I envisioned something simple to manage when negotiating an airplane bathroom. So with a pencil and a ruler, some freezer paper and a willingness to try reverse engineering basic styles, I have been having a grand time sewing Maria a custom wardrobe for her first trip to Europe. 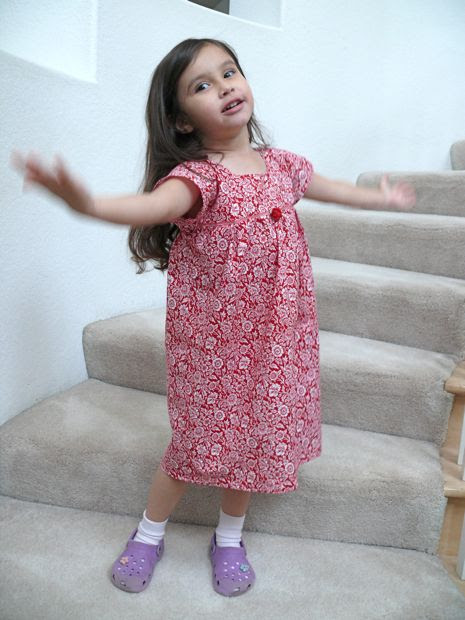 I think Maria had a grand time modeling today's project. She loves her red dress. She loves the ribbon rose and hopes it will never fall off. I love that I have successfully designed and made two pair of pants, a skirt and blouse and this sweet and easy, ready to go dress. The sewing muses have been so kind to me... this time. 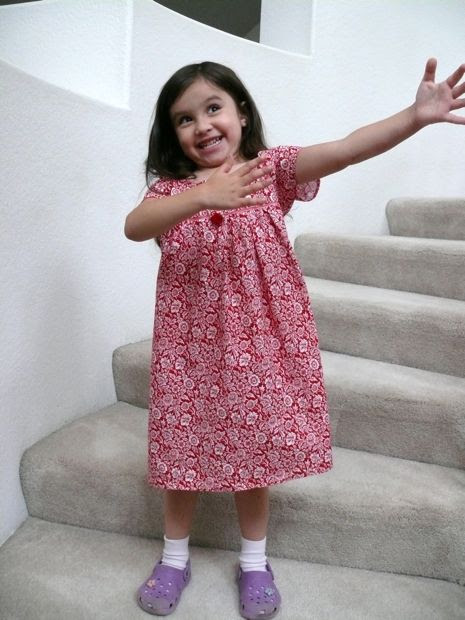 Gee whiz... I really wish this look would work on me. No, not the dramatic pose... the dress. 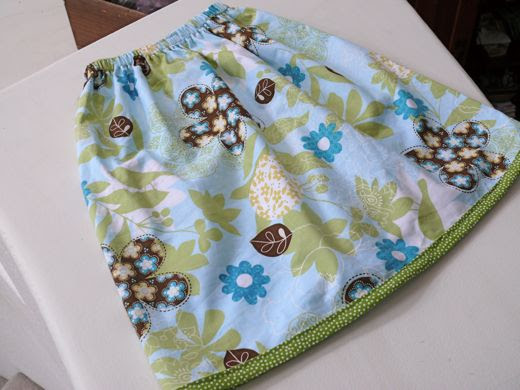 Here is the skirt. Honestly this is totally inspired by me trying to make airplane bathroom trips as easy, sanitary and convenient as possible.

I wish I had more of this print. Can you see the bird silhouettes? It's so breezy and cheerful, like the best of summertime. 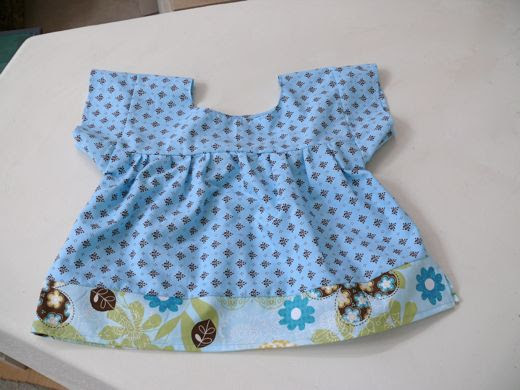 I'm sorry for carrying on, but I am so very amused-delighted-surprised-relieved about this blouse. I made it with my fingers crossed, and then made a longer version for the red dress. It worked. Stunning. Mom and I shopped together for the blue Provençal print... now it gets to journey back to France.

I should have taken pictures of the pants, but since we are taking so little clothing on this trip there will be plenty of fashion sewing photo-ops later. 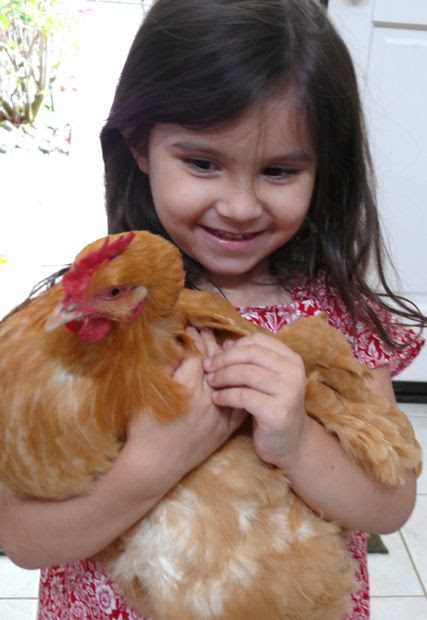 There are a few other things I am supposed to be taking care of (*ahem*,) but I hope I can do a little more sewing soon.
Posted by Natalie, the Chickenblogger at Wednesday, June 10, 2009 14 comments 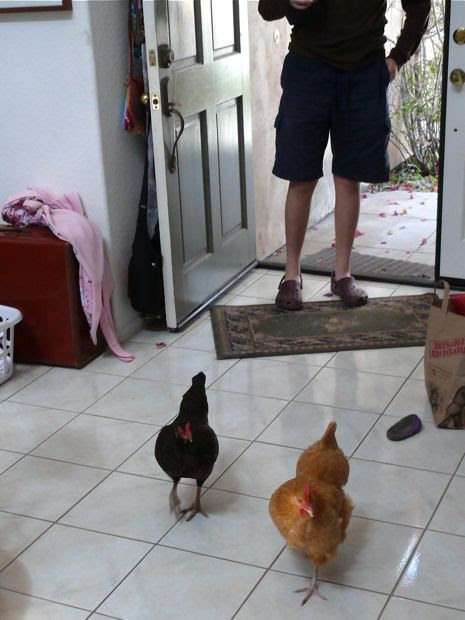 About fourteen years ago I started to think about chickens. I started to recall, fondly, that when I was a child we had chickens. We also had a barn and two acres of land, so having chickens made sense. Fourteen years ago my own family was far from any farms, living in a small two bedroom house. No one thought my fond recollections of having chickens were interesting or worth pursuing. Still I could not stop thinking about chickens and really my thoughts were becoming an actual plan to get chickens. I wanted to see their ruffled feathered forms in the yard. I wanted to hear their clucks and chuckles, their cackles. Nothing could discourage or dissuade me, and there were a lot of people that wanted to discourage and dissuade me. They pointed out all of the drawbacks of raising backyard chickens, like messes and noises and smells, and messes and noises and smells. Their sermon preached and repeated the same unholy chicken trinity: Noises, messes and smells.

Naysayers. I listened to them. I heard them. I knew they were probably right, and I smiled politely, trying to reassure them that I was not about to behave rashly. But I was about to behave rashly. I was waiting for the moment to be ripe, for the impulse to mature to obsession, for the obsession to bloom in to full scale action. I was patient and determined. I was going to have chickens. 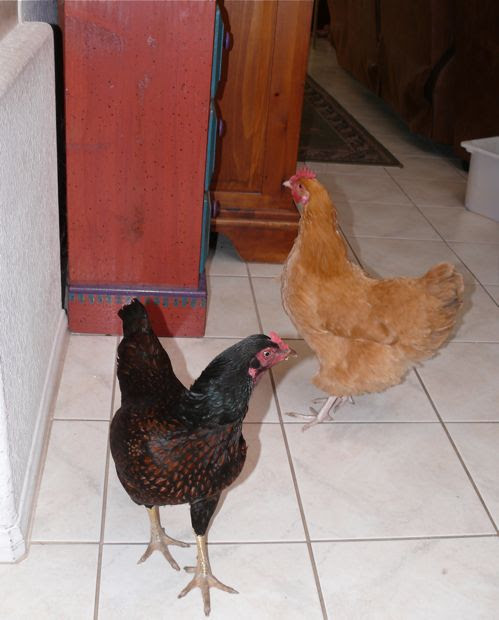 In 2000 PBS aired a program that absolutely confirmed my affliction affection for chickens. "The Natural History of Chickens" embodied the humor, the sensitivity, the practicality, the whole picture of chickens and people's history with chickens. And even though I enjoyed laughing about the "extreme" demonstrations of love and respect some people have for their feathered friends, I was also startled to realize that it was all terribly attractive. That will be me some day, I thought with some awe. I will be a crazy chicken lady. It was not a decision; it was a premonition. I remember how much I wished we could have a copy of this great film, how much I wanted to view it again and keep a copy on hand... a happy substitute for the real thing. 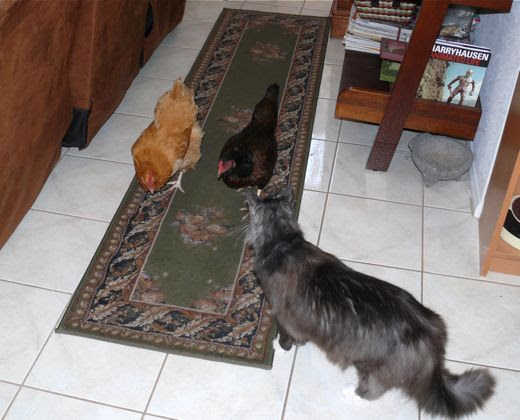 My day has come. I have my hen. I will have more again, when we have our own place. I do not consider myself a crazy chicken lady. Not yet. But perhaps by some people's standards I have arrived. The chickens do not come in the house. Well, not often. In fact this visit was a certain rarity, and we were amused by their curiosity, and by Benjamin's indignation. 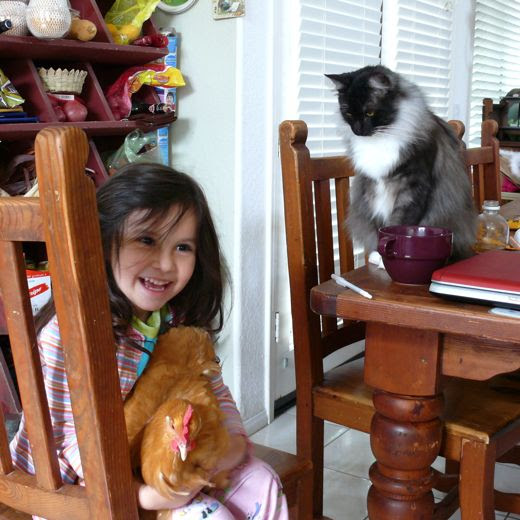 Lady Betty Orpington makes me happy. And it's not that I think everyone should have chickens, because, really, they are noisy, messy and smelly, but what I do think everyone should have is an affinity for something in the natural world that makes them happy. Everyone should have the pleasure of connecting with a garden or a pet, with the forest or the ocean, and see it with all of its beauty and flaws, its strengths and its perils and in spite of whatever challenges it presents we should extend ourselves to foster a relationship. It strengthens my mind, body and spirit to be in the ocean or walking in the woods, and it does the same for me to hear Betty in the garden, to follow her and care for her, to learn about her.

I do not have any illusions about what she is, and I am not even opposed to roast chicken... I think that is another reason why I enjoyed filmmaker Mark Lewis' film; he demonstrated an affection for his subject without oversimplifying the complexity of the issues or forcing an agenda. The film was funny, maybe silly truthfully, it was entertainment-educational. The DVD is available now, and the program is airing on PBS this week. I cannot wait to see it again. With Betty? No, it'd be passed her bedtime.
Posted by Natalie, the Chickenblogger at Monday, June 08, 2009 11 comments

Email ThisBlogThis!Share to TwitterShare to FacebookShare to Pinterest
Labels: Chicas, Nature Time, Remembering, What I Think

Mom, This One's For You

In your honor we made a our way to Falafelandia, where everything was nacholy supreme. We raised our smoothies and toasted you and thought beautiful birthday thoughts for you. The children assured us that the tribute would not be complete without ice-cream, so Geoff took them to the counter to choose their favorite flavors. 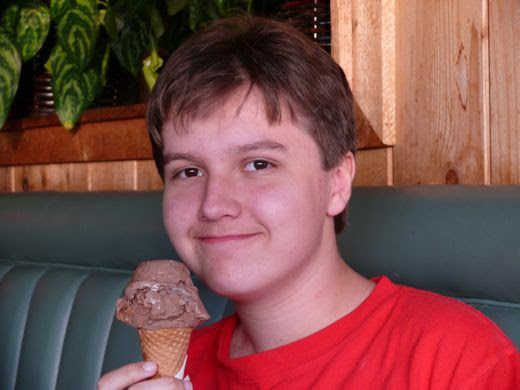 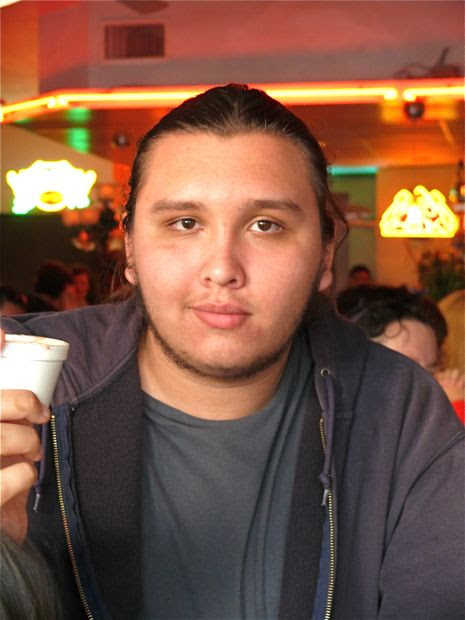 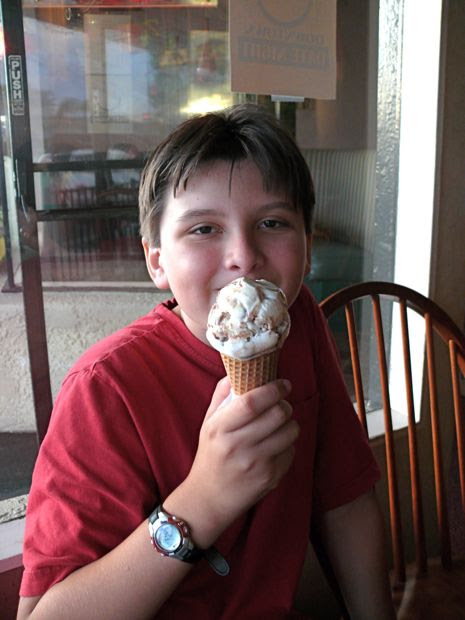 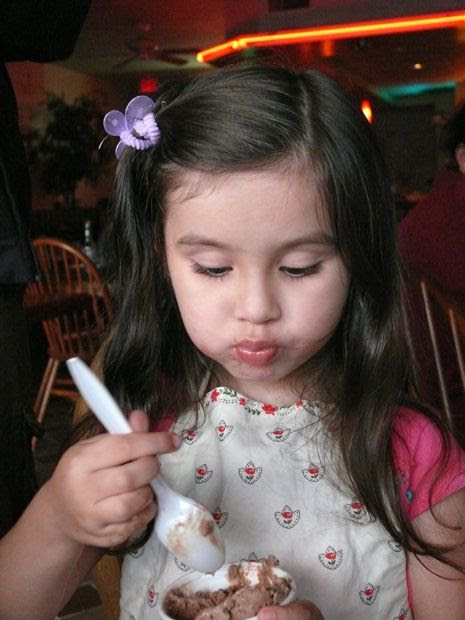 "Think of your grandma and send her birthday wishes," I told them as I snapped a few pictures.

Maria gave me two bites of her ice cream. I made birthday wishes for you... all about us being together either in Falafelandia or at Foodies, or in some obscenely wealthy-lotto billions scenario where we become co-habitors of a Central California ranchito with full wells, fertile soil, a big barn, a pond, a stream, a few houses, a view to the ocean... you get the picture. There would be room to be together, juntos pero no revueltos. 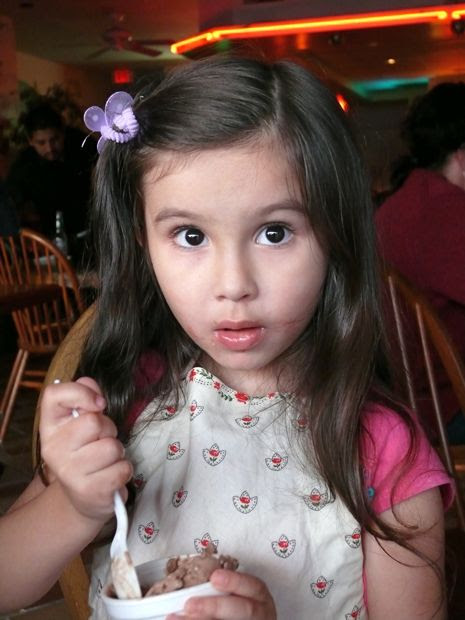 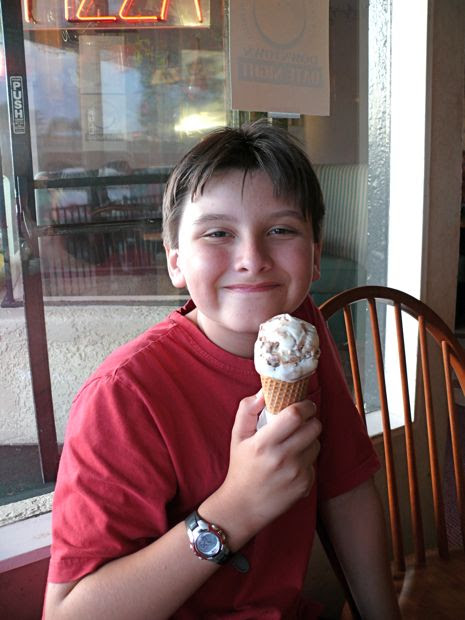 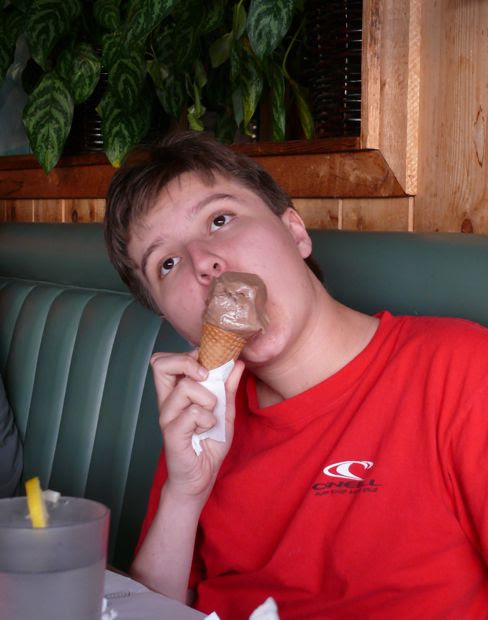 Like every day, I will be thinking of you and wishing we were together, because I love you. Happy Birthday.
Posted by Natalie, the Chickenblogger at Sunday, June 07, 2009 7 comments