Only one piece of mail this morning in my email box. Pottery Barn wants me to "Get ready for Easter Brunch, at Pottery Barn." Do you suppose this is an invitation for Easter Brunch at one of their stores? Maybe not. They say they have everything I need to celebrate and decorate with style. With their help, throwing an Easter party will be simple. Wire bunnies, apparently, are key to success, as are pastel plates. And in their thoughtful email they include a photograph of a stylishly decorated table, complete with an egg tree, lit candles and a link to their website, for my shopping convenience. I'm touched.

The last time I tried to get the jump on this holiday sort of melted in my face. While browsing at Target, I chose the three perfect chocolate Easter bunnies for Max, Alex and William. Not too big. Each bunny an individual, and male or at least nongender specific. Minimal use of artificial colors. I thought, "It's too soon to be doing this." And then I remembered the year before; Easter eve and I was out in the world scrounging for any kind of holiday treats. This year I determined to be prepared.

Our home, at the time, was too, too small to hide any kind of surprises, so I kept the three bunnies tucked away in the back of our car. Safely hidden for the big morning. Three baskets, underwear (it's traditional,) juice boxes and beach toys were collected and on Easter morning we headed to Aunt Holly, Uncle Rich and baby Nicholas's home for an egg*hunt and basket discovery. We arrived at a home beautifully decorated for Easter and Spring and tasteful living. I was happy on two accounts 1. Holly was hosting and I was spared house cleaning and decorating, and 2. At least this year I had managed to get "Good Easter Stuff."

Can you guess what happens to plastic encased chocolate bunnies after four weeks in the back of a car, in sunny California? In my haste to be discreet I never looked at the boxes as I stuffed them with the underwear, and other goodies in to the three baskets. The boys found their baskets in the Spring blooming garden, and then they found the dozens of colored eggs. Alex's confounded, stunned expression was the first indication of the Easter tragedy. His bunny was mostly a hollow, caved in disaster. The two button blue eyes were detached. They were pressed against the plastic and stared out most pathetically. The other bunnies suffered similar fates. Little bow ties were stuck in melted and hardened chocolate folds, and the gaping faces, deformed paws, told of the horror of hot afternoons and cold mornings waiting for Easter morning.

The trauma, thankfully, was short lived, when Alex announced to his anxious brothers, "Hey, it still tastes good!" Easter is about triumph; first suffering and then the glory of rising again.
Posted by Natalie, the Chickenblogger at Thursday, March 13, 2003 0 comments

I have been reading news articles on the Internet this morning. (Now who's using a dictionary?) Initially my reaction was shame; my Blog is so trivial, so fluff 'n' stuff. No, wait, my initial reaction was self-awareness: I am not keeping up with the geopolitical scene. Then self loathing: why am I so ignorant? Then, I thought about the shallowness of my own website. But I must not wallow in my vacuousness. Deep thoughts. Must think deep thoughts...

What's the deal with ham and Easter? It seems like for religious or secular reasons, Easter is an obvious vegetarian holiday. A spring reprieve for baby chicks, and piglets too.

I already questioned one ply toilet paper. These things really get to me.

Didn't the French blow up a Green Peace ship? What moral stand was that all about?

Why would a city (initials S.D.) pay a football team 30 million dollars for unsold game tickets, and also cut thousands of teachers from the public schools? Maybe by cutting costs in education we can finally afford to buy a new stadium for the Chargers!

Observation: Americans like ice cream, but are fickle about where to buy it. Baskin Robbins was the standard, then Swensens, then Haagen Dazs was the chic store front parlor, then there was the whole frozen-yogurt-nail-salon-strip-mall phase, followed by nonfat backlash from Ben and Jerry's, and now everywhere there are Cold Stone something or other. Very deep indeed.
Posted by Natalie, the Chickenblogger at Tuesday, March 11, 2003 0 comments

Email ThisBlogThis!Share to TwitterShare to FacebookShare to Pinterest
Labels: Easter, Pointless, Read It, What I Think
Last night I had a dream about Alison and Bill's wedding. Actually it was like a dress rehearsal with Alison and her bridesmaids. In the real world I haven't met the other women in the wedding party, so my super creative mind conjured a few friendly, pretty women. The topics of discussion included "hair-what to do," and "am I wearing the right bra?" I have seen the actual dresses the bridesmaids are wearing, which is why, in the dream, I was a little surprised by the long, red satin dresses with Peter Pan collars. Very shiny. Very typical of the surreality in dreams. Conveniently all of us had the same length, texture and color hair, so discussing style options was uncomplicated by individuality. The only other thing I can recall, before Geoff decided to wake me up, was feeling happy to be hanging out with the bride and her close friends and sister. It was cool. I had a sense of relief that I could ask all the questions pertinent to the big day. And I was just about to ask my "hosiery" question, when I heard Geoff: "Hey, wake up. Max is looking for you."
Posted by Natalie, the Chickenblogger at Tuesday, March 11, 2003 0 comments

Email ThisBlogThis!Share to TwitterShare to FacebookShare to Pinterest
Labels: What I Think

Alex has his father's game player's gene. He loves to play Scrabble and chess, and he loves to win. It is with humility and pride that I present "Alex's Winning Scrabble Game:" 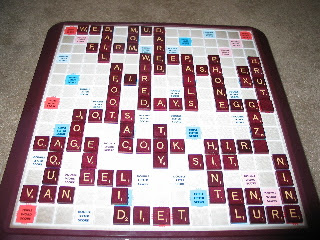 We have played quite a few games lately, and we have a good time . We enjoy watching new words take shape and spread across the board. Our style is both competitive and cooperative. I have been using Scrabble as a tool to strengthen his reading and spelling. He has excellent strategic intuition, and he is most decidedly determined. He insists on taking very little help. He sounds out words and asks for confirmation of their spelling, and he has begun to refer to the dictionary for an expanded spelling arsenal. Alex is making tremendous strides in improving his reading and writing, and winning a game over his mom has its perks too. He shook hands like a gentleman, and he grinned like a champion.
Posted by Natalie, the Chickenblogger at Monday, March 10, 2003 0 comments

Email ThisBlogThis!Share to TwitterShare to FacebookShare to Pinterest
Labels: Alex, Only A Game, School 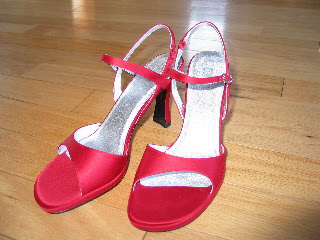 Wedding count down! I have no more than 62 days to look good in these shoes. "Feeling good" may be out of the question. I think I have passed the expiration date for comfortably wearing fashionable, high heeled, pretty shoes. Naturally the bride and groom are concerned with taking their vows of love and commitment, organizing hundreds of guests, reserving space for a ceremony and reception, and selecting floral arrangements. And I certainly don't mean to minimize the significance of their special day, but I have issues too!

It's been a long time since I walked around in shoes like the ones I will be wearing in Bill and Alison's wedding. Hans and Gretchen bought me Uggs a few Christmases ago and let me tell you those boots are pure comfort; one big, all traction, fleecy hug and massage. Another time Hans and Gretchen gave me some Doc Marten's. They're black and sturdy and made for action. They are mud kicking, snake stomping, hard core mountain munchers. For my last birthday they sent rainbow colored, all fluff bedroom slippers. They are cushy and whimsical. Very, very laid back. So you see, I am seriously out of practice in the realm of tilted, elevated, strappy, snappy little red dress shoes.

I wore them around the house today. I figure I should let them start to break me in as soon as possible. I think I've got the balance aspect mastered; they aren't that high. The angle is a little tough to hold; I'll need to work up to longer and longer standing times. I must be careful not to cook or clean in them, because they are not hose-able. I suppose I should also avoid feeding chickens while in active training. I plan to wear them 3-4 times per week for 20-30 minutes at a time. Hopefully my gait and stance and my overall stamina will improve.

A pedicure, I think, is more than a luxury in this circumstance. I should definitely be looking at an intensive exfoliation program. I need to also work on cuticles, nails, rough heels and a total moisturizing regimen. I have already accepted that shaving is not optional, and I am cool with that. Initial observation has revealed to me that hip young women are not wearing hosiery. Furthermore, nobody even says "hosiery" anymore.

Okay. I have a plan. I'm feeling hopeful. And tomorrow I will think about strapless bras, make-up, hair, weight training and weight loss, and how to dress three boys for a "cocktail dress" wedding and reception.
Posted by Natalie, the Chickenblogger at Sunday, March 09, 2003 0 comments

What if I won a lottery? I could live a year in Portland, Oregon, or Portland Maine, or Paris, France. And I'd bring friends along, and we'd be neighbors, and we would walk to markets, garden centers, to museums, theaters, parks, bistros, cafes. We would paint in the woods, bath in rivers, and be friends of all the shop keepers. We would host parties, picnics, soirees, teas, and sleepovers, and every holiday would be marked with seasonal flair and appreciation. I feel better having a plan, just in case. October 16, 2021