A Turkey A Day :: Day Three 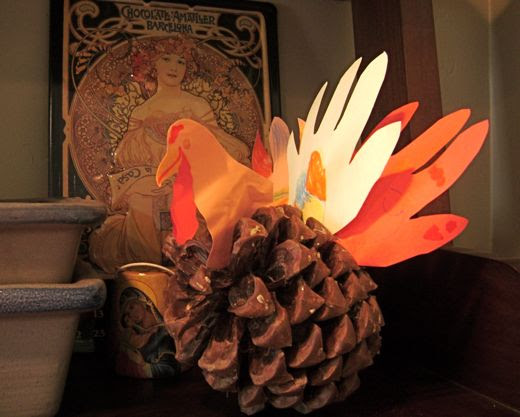 More turkey hands, but this time they fan together to make a turkey tail. We love our very own garden variety Torrey pine cones. 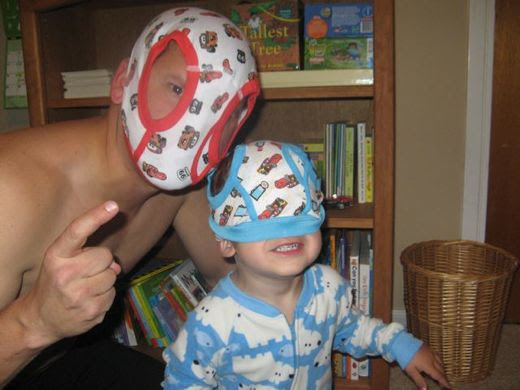 Today I am thankful for humor: Jokes, the good and bad ones, absurdity, puns, nonsense, wit, observations, randomness. Thank you, thank you, thank you for making me laugh. I find humor in a lot of situations, from many different sources, but I must make special mention of my brother, Bill.

Dear Bill, you are so very, very funny. And I see that you are sharing your sweet, twisted, and daring style with your son. The legacy lives on. Long live ¡Memo Libre!

(I did get permission to post this image and if you don't want it on the World Wide Interwebs then you will have to come here and make me take it down. Or pay me. Your choice.)
Posted by Natalie, the Chickenblogger at Friday, November 20, 2009 2 comments

Links to this post
Email ThisBlogThis!Share to TwitterShare to FacebookShare to Pinterest
Labels: Art, Familia, Maria, Only A Game, Play 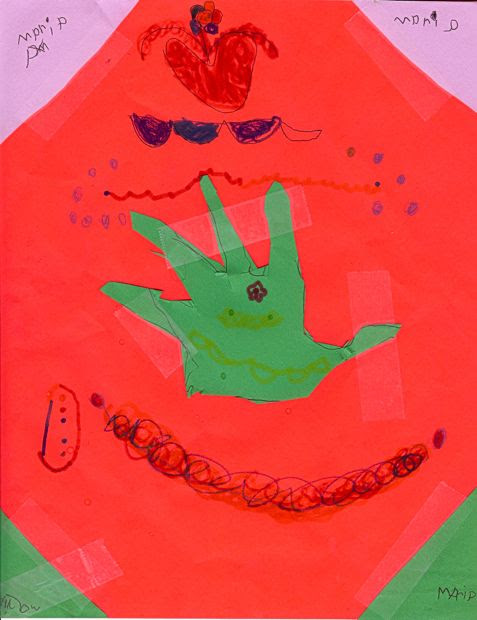 Today's turkey really exemplifies Maria's yearning for embellishment, decor, detail and tape. 3M has to be fairly satisfied with our generous contributions to their bottom line. A heart sprouting flowers... it's so "Glorious," as Maria would say, and she would say it with her hand fluttering over her heart, her head tilted reverently.

Funny about her name. She had the letters in order and facing the right direction before school began, but all the practice seems to have encouraged creative license. I shouldn't be so stingy and trepidatious... real word, honest... I should dig out some glitter and sequence, maybe those zigzag scissors. On the other hand she is accomplishing a great deal with the supplies she has dug up for herself.

Today I am thankful for friends. New friends, old friends, friends I have reconnected with, friends that show up with wine and laughter, new ideas and encouragement... best friends, near and far. 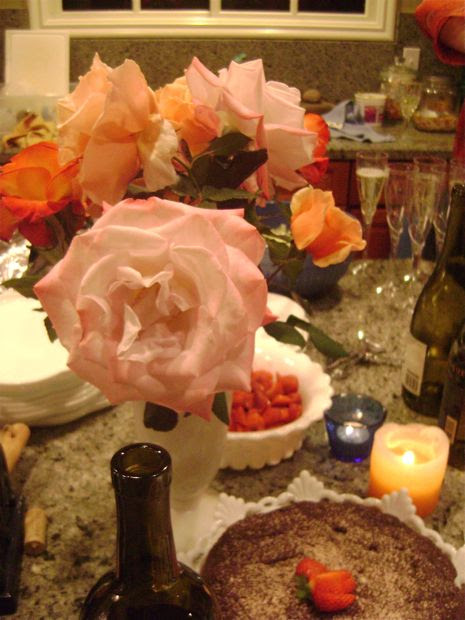 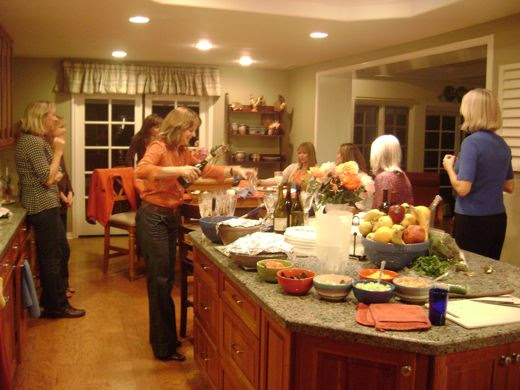 Posted by Natalie, the Chickenblogger at Thursday, November 19, 2009 6 comments

A Turkey A Day 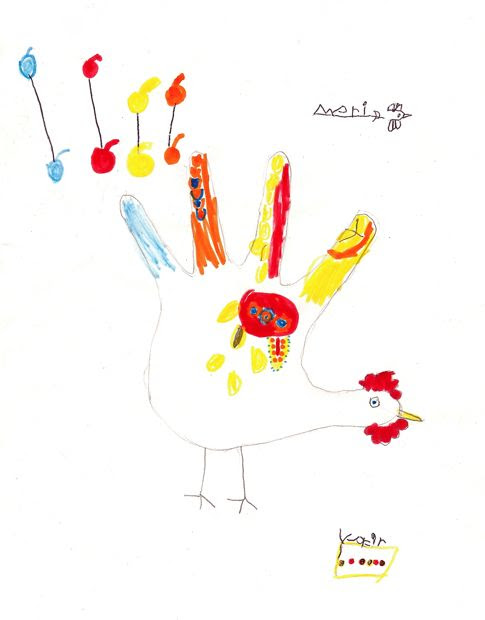 Everyday Maria makes a new turkey. Tracing her hand is her favorite method, but she also turned a pine cone in to a plump, if prickly, Meleagris gallopavo. I love its subtle chicken-y influence. I love the bright colors.
I love her signature, complete with artistic bird flair. I could gobble this up.

I am going to count down the days to Thanksgiving with art and gratitude.

Today I am thankful for creativity, for media and expression, and for the time and resources to make and appreciate Art.
Posted by Natalie, the Chickenblogger at Wednesday, November 18, 2009 2 comments

Can We Talk About Something New? 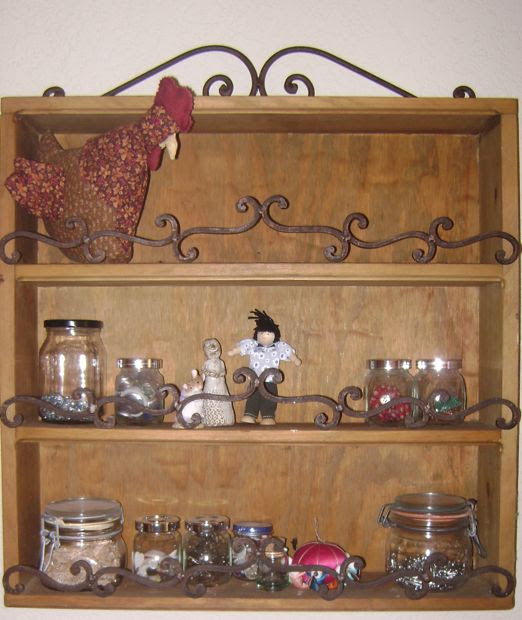 It's not just you. Believe me, I have been wondering the same thing: Will I ever move on from the subject of packing-moving-unpacking?

And you can trust me on this too: I have been very conservative about not documenting every last detail. I have spared you the number of times I drove back and forth

You know what? Unpacking and settling in is where we are at. That's how it is, and not much else is going on. Well, almost not much... Insomnia hit me real hard last night and, beginning at one a.m., I began pinning, cutting and sewing a dress for my niece. It's all done. At face value that might sound like super ambitious productivity, but really it was just the darn insomnia and of course I was less than effective the rest of the day.

yawn Tonight I will sleep. Honest. 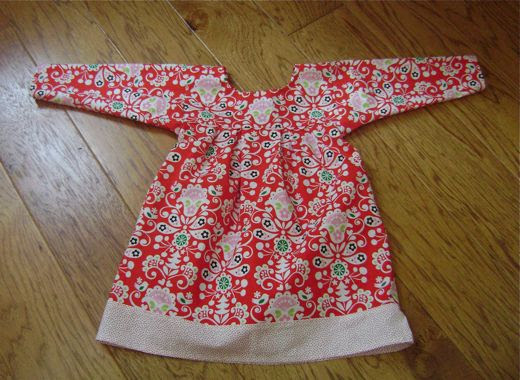 This was one of those prints that I could not resist and even though I found it in July, I knew it would make really folky-sweet Christmas dresses for Maria and her cousin Izzy. What was I thinking? As though I had (have) nothing else going on? It makes me laugh. I am nuts. It was such a luxury getting to sew, and finally seeing this vision completed makes me happy. Maybe I am a bit off-course in my priorities. Maybe not. 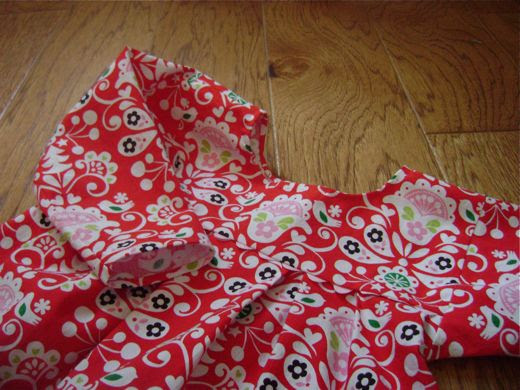 Under the arms and fitting around the shoulders is still my weak point with this pattern. Turns out I can make my own pattern, which is not the same as being good at it. Still, this is so much easier for me than following the store bought patterns, with their obtuse directions and aggravating tissue.

Can you see the pink rick-rack peeking from the bodice? I also added a contrasting border to the hem... for length and for fun. I did not account for how much fussy cutting this print would require. I fussy cut both the sleeves and the bodice, but now I am not sure I have enough to complete Maria's dress... uh-oh. Maria may get a holiday blouse to wear with her tulle skirt. 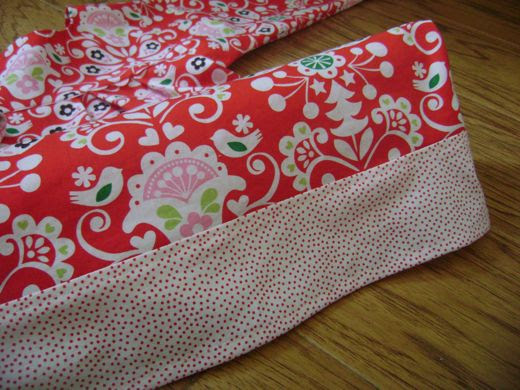 I bought the dots somewhere else, and at some other time, but they are both Michael Miller prints. And now I am rambling and scrambling, a kind of absent minded way of avoiding the pressing chores and responsibilities that are weighing upon me.

Tearing myself away from the warm glow of iMac... I am going to aim for genuine super ambitious productivity... wish me luck.
Posted by Natalie, the Chickenblogger at Tuesday, November 17, 2009 5 comments 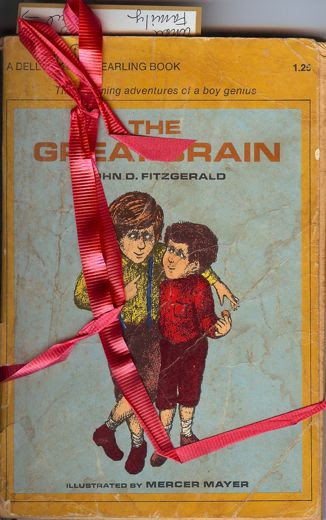 I am opening boxes that have been packed and stored since the Summer of 2003. Even when we were settled in at our Rancho, it only lasted about three months, before we were back in boxes again. The net results are as follows:

We have at least three of any given household item. In the case of glue, we have about a dozen bottles, but I still had to run to the dollar store and add another bottle to our (missing) collection. We have dishes I do not remember buying. I found our breadmaker. We bought that as a moving consolation in 1994. We have more than one Scrabble set and several humidifiers.

The other night Max was looking for something new to read, and I realized that our books are actually 70% gathered in the same room, so I grabbed a flashlight and went to the library. Library. tee hee... me talk fancy. So I broke in to one box and found twenty-five years of SIGGRAPH journals. Then I peeled ancient tape from another box and hit pay dirt. Still tied together by red Christmas ribbon, three books sent by uncle Paul. I do not know when, but presumably a long time ago, he sent his books, favorites from a series his mother read aloud to him and Joel when they were small boys. Such a sweet gift, the loan of his childhood treasures for his nephews to enjoy. Thank you Paul.

I know. It raises some issues. Why were they still tied in their ribbon? How long did they languish in the dark? How many trips did they make from town to country and back again? Didn't anybody read them and love them and enjoy the kindness of the man sharing them?

I hang my head in shame.
I wince. Audibly.
But you gotta know, it is what happens when you pack and move and move and pack, and commute and relocate, when you pursue a dream and postpone gratification...
Things get left behind and stored for later, and later, well, sometimes it comes much later than we ever imagined. Sometimes later comes painfully late. It's not ideal, but we've been fortunate. Sure, there's been disappointment and collateral damages, but when we arrive at a place that sits to greet the rising sun and nurtures pine trees and flowers, when we want to read a new book and can find something wonderful in our very own library, then I have to say: We are fortunate. And unpacking, daunting as it is, can be like present time and full of surprises.
Posted by Natalie, the Chickenblogger at Sunday, November 15, 2009 6 comments