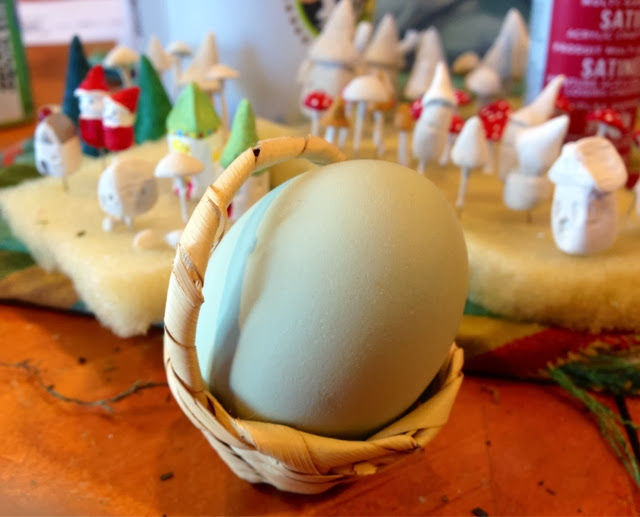 Without a doubt... Presenting a first egg from our new flock...
From an Ameracauna hen.
It's so beautiful!  It's so green!
Have I ever collected an egg from a nest before?!
Yes, but it's a new thrill, every time.
What a delightful little joy.
Posted by Natalie, the Chickenblogger at Saturday, December 14, 2013 2 comments

A single photo - no words - capturing a moment from the week. A simple, special, extraordinary moment.
A moment I want to pause, savor and remember.

If you're inspired to do the same, leave a link to your 'moment' in the comments, for all to find and see.
Posted by Natalie, the Chickenblogger at Friday, December 13, 2013 0 comments 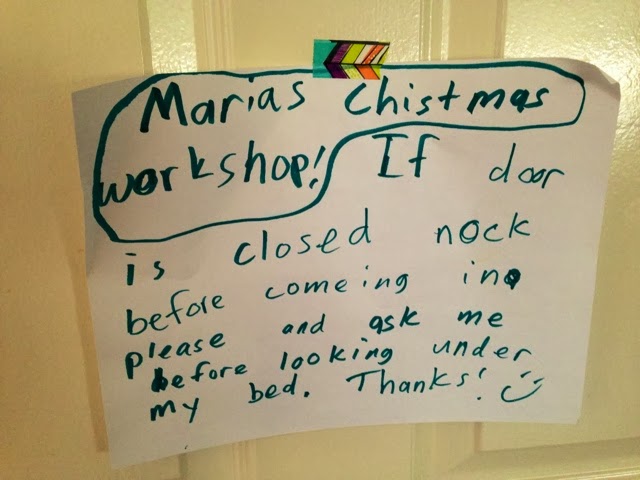 Maria raises the bar!  Her workshop has been stocked, organized and fully operational for three weeks.  I'm going in... its time to check lists, take inventory and start wrapping!  I promise, I won't peek under her bed.
Another assignment... Geoff has been asking me what I want for Christmas, and my birthday. I wish those two dates weren't so close.  I like to spread the fun out. Also, I have no idea what to ask for.  The truth is I am darn close to having everything I want, but I cannot deny the wild amusement of tearing into a surprise!  I do need bras embarrassingly badly, but gift cards aren't so fun to shake under the tree!  lol
Posted by Natalie, the Chickenblogger at Thursday, December 12, 2013 1 comments

The Foo Who Stole Christmas

Once upon a time there was a small Foo, a wee kitty who warmed his polka dots and snuggles into our hearts. But for all the bits we love about him, there are some bits that leave a lot to be desired. He steals wool, he hides Legos, he absconds potatoes, and chews socks... especially socks on feet! He knocks over things, he bolts through stuff, climbs, scurries, scuttles, and runs amok. Will this tale have a happy ending?

Our faux fir, our Christmas tree is up. It's in the perfect spot, ready for lights and tinsel, and baubles, and our adoring gazes. And we were only a bit surprised when Mister Washburn Foo demonstrated typical feline curiosity, but we did hope, even believed, that it would be a fleeting attraction, that he would leave well enough alone, after seeing a Christmas tree is not the best hang out. We thought it was only a sweet, temporary moment.

But no. It's a moment too much... he's made the tree his fort, his tower, his domain. He scales the branches expertly. He lurks in the shadows, makes a nest in the boughs.

The day he found his tail in the tree, his furry frenemy, we knew he would never come down. High above us, in his perch, with his tail to entertain and torment him, he has no reason to leave his faux fir fortress.

He looks for his tail...

It's black, and long, sleek, and wily. Have you seen it?

It's December 8th, and we still cannot hang lights, or ornaments in our tree. We sprayed his nemesis fragrance: Peppermint, but to no avail. In fact, he took to chewing the branches and snapped one off, with a defiant gleam in his eyes.

As for our happy ending, at least he's decorating, now. So far he's carried up a feather he stole from Maria's hat, and wool he takes from the sewing box!

How thoughtfully he places his holiday cheer. How lovely the trinkets in Mister Foo's tree. But don't dare try to remove them, or add your own touches!

He's ready to spring, to remind you that this tree is his!

A new chapter in the Foo Saga: Tree Down.
Posted by Natalie, the Chickenblogger at Wednesday, December 11, 2013 3 comments

I wish I could be sure. I do have my doubts. I found this beautiful egg in the rabbit hutch, but I am not sure it really is a first egg from one of our new hens.

It's not large, like I would expect from any of the new hens.

It's not green or blue like we are hoping to get from the Ameracauna hens.

Buff Orpingtons, like Lilikoi, lay pale brown eggs. Or, at least, Betty did.

It could be something Kamen managed. She hasn't laid an egg since summer, but none of our hens ever laid an egg with lovely brown freckles.

It's a pretty egg. One of our hens is to be congratulated.
Posted by Natalie, the Chickenblogger at Tuesday, December 10, 2013 0 comments

Five Good Things... In The City

Five years ago, when we were thinking of a good gift for Geoff's mom, Ruth, we decided we would enjoy a City Christmas... some brunch or lunch, some culture, lights... fun together in the city. We've enjoyed great music and food, our first Nutcracker Ballet, seeing Bambi in the Nutcracker, a day in Balboa Park, and this year the Park and the Zoo!

It was a brisk, clear day, and we had a wonderful time.

1. The city of San Diego, with Balboa Park and the San Diego Zoo

2. Seasonal sights and sounds... the music from the organ pavilion, the lights in the park and city

4. A ride on the Skyfari at the end of a long trail.

5. A weekend full of activities with family and friends.

Dogs and Cheetahs, together~

The Klipspringer has tiny, rounded hooves with a pad in the center that acts like a suction cup, so these nimble antelope can hop from rock to rock without falling.

It's hard to remain rational, to not want to snuggle this kitty, and then he paces and roars, and the size of him and his voice knocked some sense into me!

Posted by Natalie, the Chickenblogger at Monday, December 09, 2013 4 comments