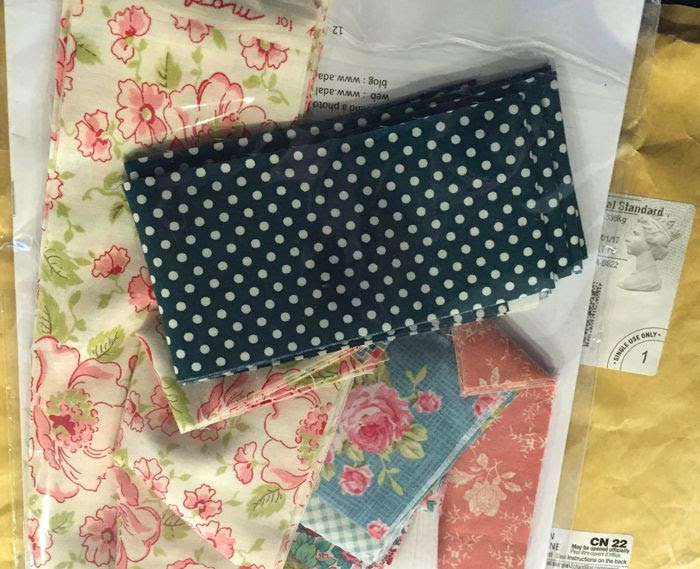 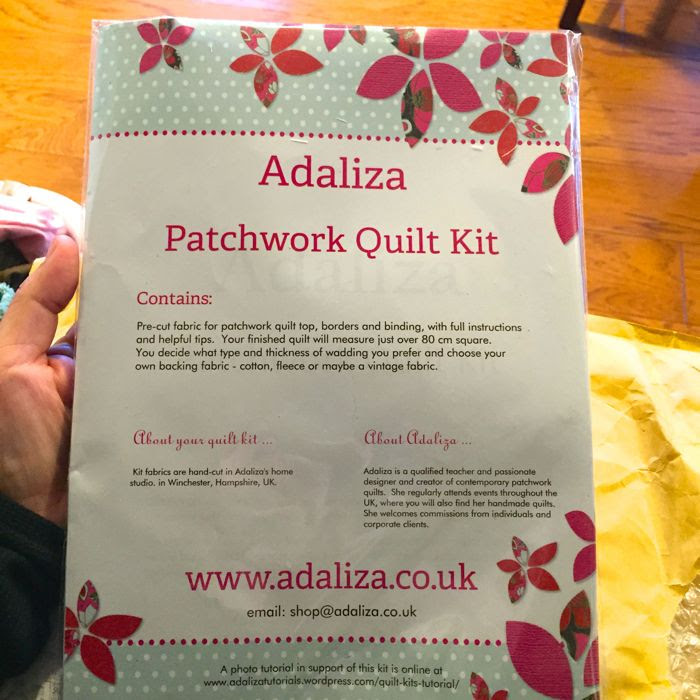 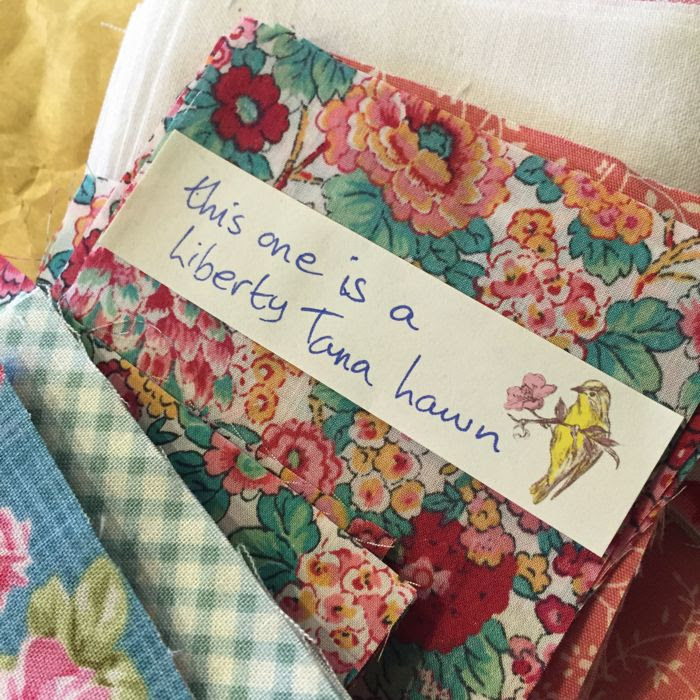 This is a gift, all the way from England. Can you believe it? I cannot, almost, except it's here, and Adaliza and I have exchanged so many long and chatty emails, become such happy acquaintances, that I guess I really can believe it. She's kind, talented, thoughtful, with dear stories about dogs and a duck, and loads of beautiful creations, this friend. She's generous, obviously!

On the subject of quilts and patchwork, I do have many posts, but I see now, it's been almost three years since I work on a quilt of my own, and even that one, sadly, is still a wayward wip, abandoned, somewhere in the office of stacks and stashes.

Dear Adaliza, the kindness of your gift has moved me deeply, and I am cautiously preparing to do it justice. For instance... I think I should change the needle on my machine, so I am sewing these small squares with as fine and sharp a needle as possible. Don't you agree? I am anxious about the little errors that add up so dramatically when working with small pieces. And a confession... I have never, ever, used a kit or followed instructions. My one consolation is knowing we have a well established email relationship, because I just know I will be reaching out to you for assurances, tips, and counseling... even before I begin tackling your beautiful quilt kit! My hope is to do a good job, share my progress, inspire all sorts of friends to visit your blog and discover your quilts, then one day fly clear over to your corner of the world to thank you properly, in person, and meet Flora, too! You are so nice, friend, and I am lucky to know you. Thank you, very much. Sincerely, Natalie~

With Infinity More Monkeys, a picture a day.
Posted by Natalie, the Chickenblogger at Saturday, February 11, 2017 2 comments

Links to this post
Email ThisBlogThis!Share to TwitterShare to FacebookShare to Pinterest
Labels: Friends, Gratitude, Quilt, Sew, The Blog 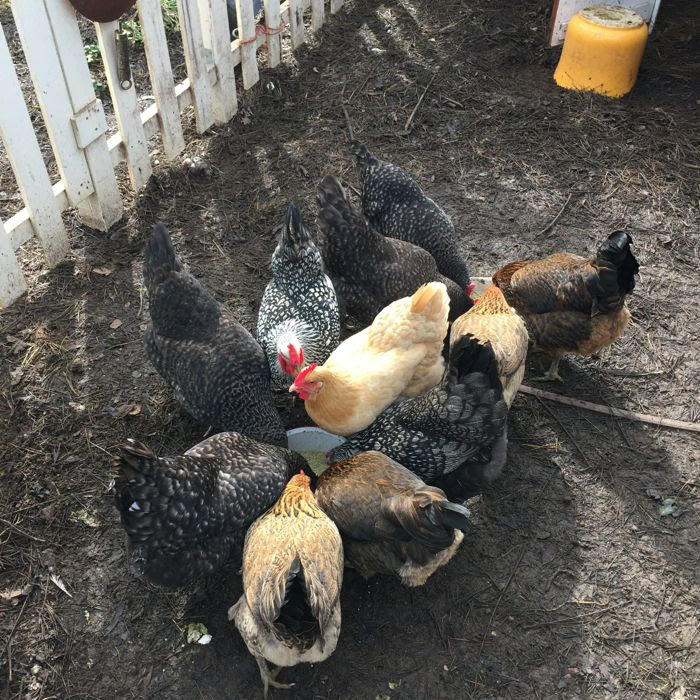 Chicas, in Spanish, are girls. And these chickens, are my girls, my chicas.

I know, I've written these words before, which is something that happens, possibly more often than I realize... blogging since 2002, I repeat myself. Perhaps it can be helped, but I don't think I am going to be too concerned about it.

With Infinity More Monkeys, a picture a day.
Posted by Natalie, the Chickenblogger at Friday, February 10, 2017 0 comments Home is full of comforts. And I wish all the world were so~

With Infinity More Monkeys, a picture a day.
Posted by Natalie, the Chickenblogger at Thursday, February 09, 2017 0 comments

8 The Eggs Are Back 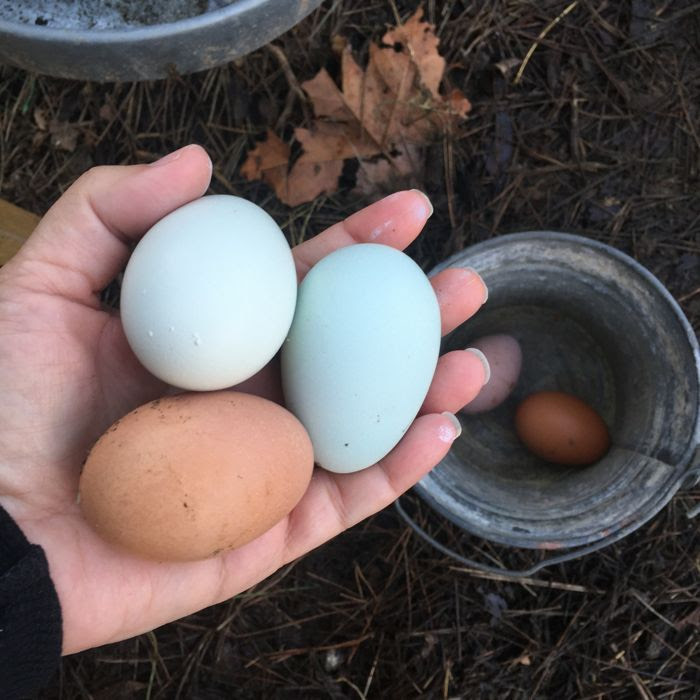 Such a long spell of no eggs. It felt like months, and it practically was that long. Between the big molting the hens went through in November, then weeks of short days, long nights, we went many weeks with no eggs at all. More recently we started getting an egg every other day, then two. And today, all of sudden I find 5 eggs. And perhaps even more awestruck and admiring than ever before, I brought them into the house with ceremony and affection. The eggs, the pretty, nurturing, inspiring, darling eggs are back.

With Infinity More Monkeys, a picture a day.
Posted by Natalie, the Chickenblogger at Wednesday, February 08, 2017 0 comments 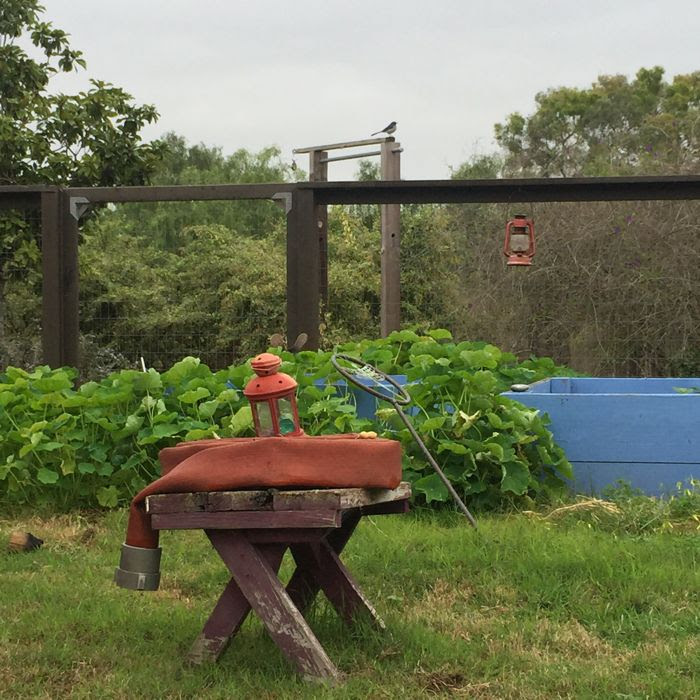 I think of what I love, like our backyard, and scrub jays, like the rain that's filling our state's reservoirs, the fresh air in the wide, open sky, education for all people, access to affordable healthcare, and the survival of our republic, the United States of America. I value and respect science, reason, freedom of all religions, and speech, and assembly.

"I've noticed people objecting to "politicizing" issues in recent days... and I have struggled to find the words to express my concern about recent events, including politics, because I don't want to debate, defend, shame, or condemn, and I do not pretend to have ideal solutions... but it seems to me, more and more urgently, that the matters of this election, of gun control, of human rights and respect... these "political" issues are becoming pressing humanitarian issues, on the verge of slipping into a desperate crisis. It feels cowardly to sit quietly by, and not take a stand against hate, lies, greed, and a calculated call for violence and tyranny. I don't know if I can effect change, but I am one more voice, one more light... and I will vote against Hate. And I will vote for human rights, for gun regulations, for representatives that answer to the people and not corporations, or the NRA. Our government is not perfect, but our ideals have been good, and I hope to see them preserved, honored, and guided by love, respect, intelligence, compassion, and truth.
This isn't a political stand... it's civic duty." June 6, 2016

Those were my thoughts, that I shared last June. One regret is that I did not just come out and indelicately, but truthfully state, "Donald John Trump is a tyrannical @ss, and we are doomed if we allow him one step closer to the White House," but I was trying to play nice, so I held back.... but now, with the appointment of Betsy DeVos to head our department of education, I am evermore aghast and dismayed. Aghast to see the deliberate, systematic fracturing and dismantling of our democracy, and by what right? By the "right" of money, and the means of coercion, by the manipulation of truth, which is to say lies, by the devaluation of journalism, science, education, the environment, diplomacy, and our constitution. I am dismayed at the prospect of a future in which our air and water are polluted, and our nation's children have been robbed of equitable, sound, reasoned, opportunities for education. There is too much at risk to play nice, to be tactful.

I am dismayed that there are still people wondering if it's right to politicize, issues, who question the loyalty and patriotism of people criticizing the POTUS, the legislature, the talking heads surrounding the White House. I am dismayed that lies, misinformation, misdirection, and ignorance are rolled up into one big pill that some seem to be perfectly willing to swallow whole... and let's be clear: blanket "skepticism" is not the same as rationally, intelligently reasoning with facts and evidence. Calling "all" of "them," corrupt, liars, terrorists, rapists, fake, evil," does not protect us, and it does not make us smart. It is ignorant, lazy, and paranoid, and no sides should be exempt from criticism for making these judgements, placing these labels, relying on this kind of narrative.

I am apolitical, honestly... or, at least, that is what I want to be. To be at liberty to pursue happiness. I love buttercups, snowflakes, republicans, democrats, Sunday dinners, fireside chats, and the constitution. I love art, camping, and making, chickens, mentoring in STEAM, traveling, reading. I want to enjoy the benefits of living in a free society, with representative democracy. I value the benefit, to all, of living among healthy, educated neighbors, and I want a peace agreement between people who have opposing views, because we have, and we can, get along, but we have really got to stand up for the essence of what has made our country worth living in, so that we can get back to our run-of-the-mill differences and opinions, and happier pursuits, under the protection of a government with checks and balances, that stands for truth, and justice.
Posted by Natalie, the Chickenblogger at Tuesday, February 07, 2017 0 comments

Links to this post
Email ThisBlogThis!Share to TwitterShare to FacebookShare to Pinterest
Labels: American Dream, School, What I Think 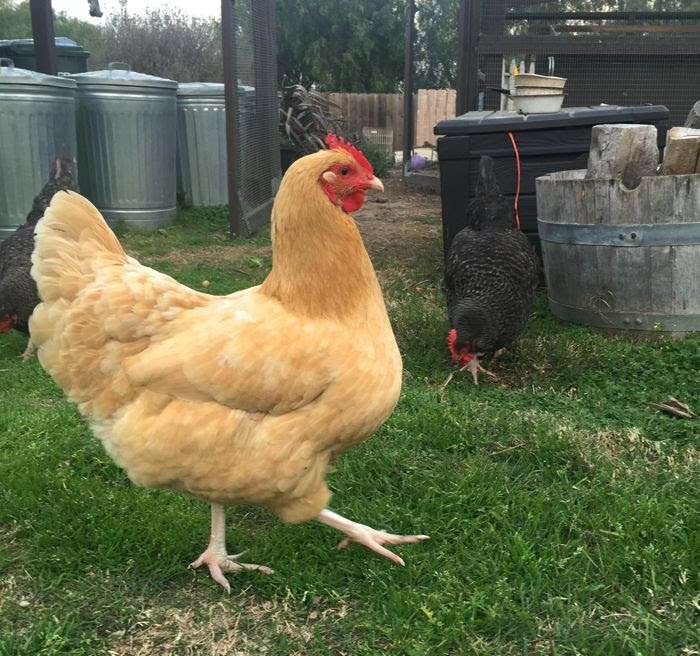 Fiona Buff Orpington is a fine hen. First-rate. Pretty plumage, sweet disposition, kind and curious. She has a smart profile, darling feet, a pert comb, and a refined plumpness, which is most becoming.

With Infinity More Monkeys, a picture a day.
Posted by Natalie, the Chickenblogger at Monday, February 06, 2017 4 comments

5 Still Autumn in My Heart 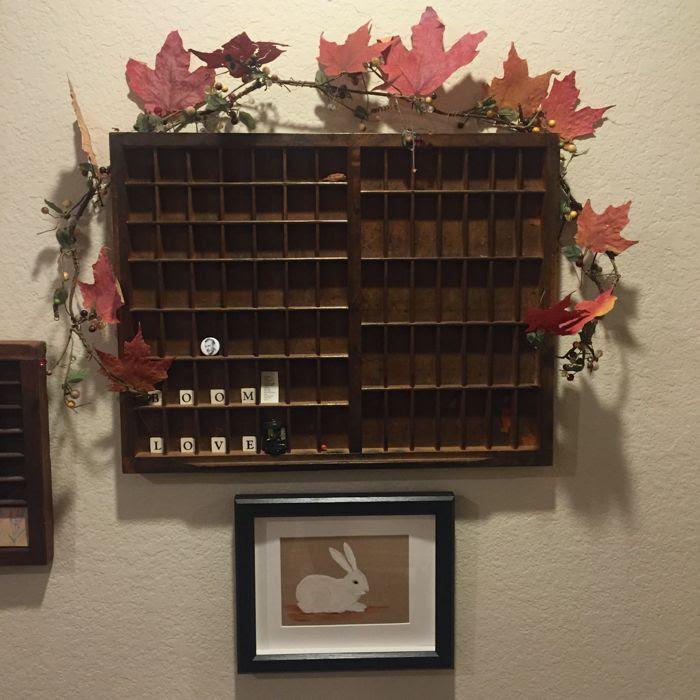 Early autumn, New England... if I could go back, I would. I could not do more or see more, nor be more thankful, for everything we enjoyed there. It was time well spent, thoroughly immersive, and appreciated. But to have more of the same, to revisit, I would not pass on the opportunity. And as much as possible I relish the memories formed there. Maria and Jennifer's pressed leaves are on our mantle, and here are the ones I saved from our walk through the Public Garden. I had them pressed in a book, then sitting on a small bench at the top of the stairs. Even when they were crumbling and spreading up and down the stairs, I couldn't bring myself to sweep them away. It felt too much like a betrayal, like admitting that the trip really is over. Then I realized one more way to celebrate autumn and Massachusetts, friendship, adventure, a part of the Freedom Trail, which traces the beginnings of our democracy, and my maple leaves... and so now they are in the garland, around the old printer's drawer, which makes me happy.

With Infinity More Monkeys, a picture a day.
Posted by Natalie, the Chickenblogger at Sunday, February 05, 2017 1 comments

We celebrated Maria's birthday. I want to remember to suggest she look over at FB, where friends left sweet birthday messages. I am not sure why, or what excuse I can make, but I feel as though I need one week per day to get things done, including a celebration. I am calling this her Birthday Week, and there may be a cake involved, at some point.
November 30, 2020
8:17 am
Yesterday Alex and Bambi dismantled the pumpkin bed... the logs are rotting and full of crawly things. We brought out all the hens and the goats, and the garden felt full, and lively. Alex, Bambi, and Max took turns at splitting what's left of the logs, and discovered aged fatwood. It smells beautifully of hard resin. William and I made small fires to test it. Fatwood lights easily. The hens made quick work of the crawly things, and the goats trimmed grass, leggy roses, and even snacked on wood chips. All the details are in my head, and I hope I can always recall what a very lovely time we shared.
November 28, 2020
9:52 am