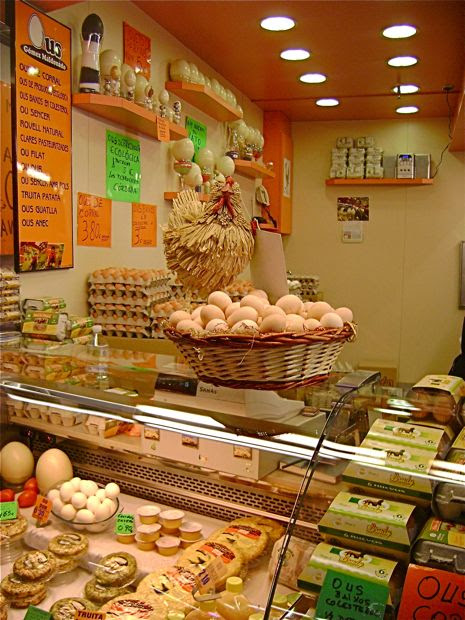 Barcelona... the egg shop in the Mercat Santa Caterina

Technically I am still on a blogging break...who am I kidding? My brain blogs constantly... blah, blah, blah,blah... The only difference today is that I am going to ignore hungry children and the mess that is my desk, so that I can transcribe the brain's "blah-blah-blah." I am having major brain strain and I need an outlet to relieve the pressure. 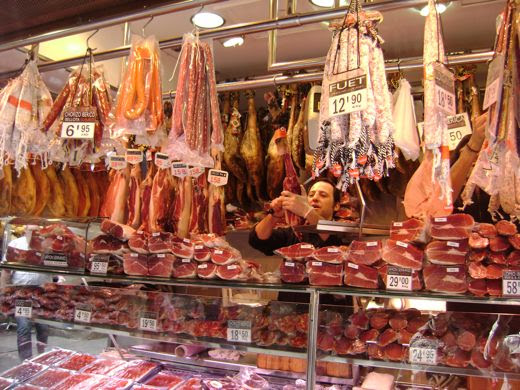 Mercat de la Boqueria... I do miss having a few slices of fuet with my breakfast.

Operation Chicken Abroad was a huge success. Yes, there were false starts and some bumps, but even the challenges served to give me an appreciation and understanding for how to proceed with Part II of the experiment: Chickens Abroad! Speaking of chickens... which came first the chicken or the egg the lodging or the flights? My very helpful AAA travel agent took one look at our "plans" and suggested we... 1. Pare it down. A lot. 2. Find lodging first, because bed and breakfast for 6 is not an easy fit. We are looking for apartments, barns, small castles. 3. Buy our airline tickets. 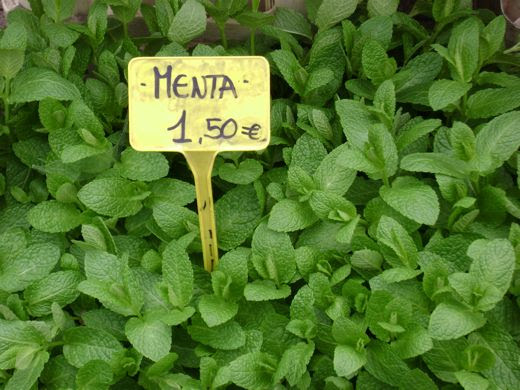 Las Ramblas may be "touristy," but I cannot wait to go back. It is full of sights both entertaining and soothing, and any place that can offer mint this beautiful has to be good.

So I went home and studied the maps and guide books and searched my feelings, hummed, pulled the ends of my hair and cracked my toes until I forgot what I was supposed to be doing. Then I bought our airline tickets! Oh dear. Was that the right order? Not. We have six reasonably priced roundtrip tickets to London.

But, weren't you going to make use of your Chapter I Chicken Abroad in Barcelona experience, so that Chapter II would be easy and familiar?

Hey. Hey! Don't mess with me! Those tickets were cheep cheap reasonable, and also, rumor has it they speak English in London. 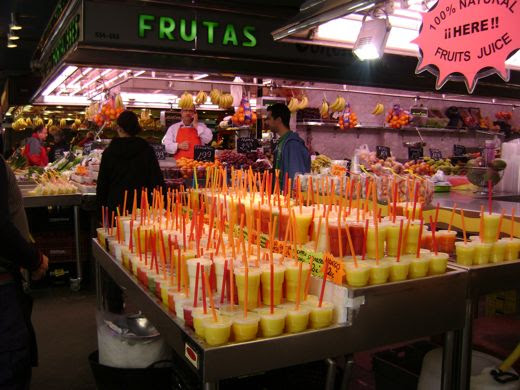 La Boqueria offers everything for the appetite, and like in the markets we know from Mexico, we found delicious fresh fruit juice.

Alright, so nothing is going as planned, so far, but that doesn't mean we are on the wrong path. It's just a different path. And now my job is to figure out where to stay in Great Britain and to learn thousands of years of British history and how not to be rude in foreign countries, where to tip and when to say "England" instead of "GB" etc... Seriously, I have no idea where to go in London or how long we should stay there. I may have to figure out a way to explain to Geoff how we wound up spending a week in the Lake District and why it's delightful that we are walking the same country lanes that Beatrix Potter travelled. Sigh. Alex is pulling for the train ride to Edinburgh and castles, or "Go to a fancy well-to-do party and sip tea with the Queen." His accent is off, but hilarious nonetheless. Max would settle for a week at Legoland, Windsor. William, rational and reasonable as always, says he knows nothing about England and does not know what he wants to see. I will hand him the guide book asap. Geoff has museums and landmarks on his to-do list. Maria wants to live in a castle. 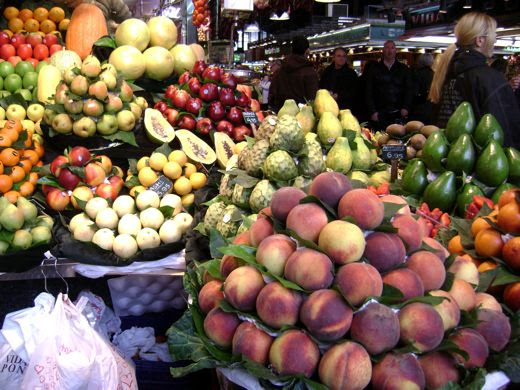 And of course you don't have to have your fruit licuado.

So, we have a lot to figure out. And we need help. Obviously. Then there is the rest of the trip, and this will include a week in Barcelona, time in Holland, which means time in Belgium, because you know geography. Geoff says he still wants to see something in France, and I say, Whoa! We are forgetting the "pare it down" directive! Okay. Barcelona and Holland are nonnegotiable. Can we do this? Yes, we can. I think so. Maybe. Did I mention we need help? 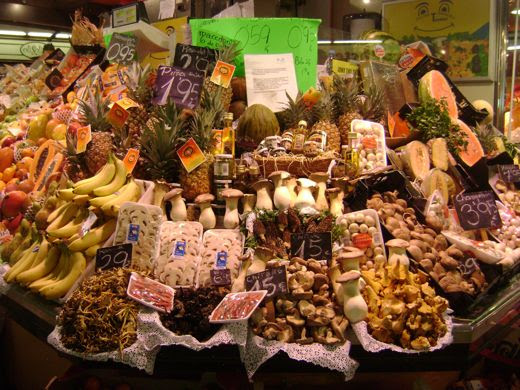 'shrooms! A mushroom walks in to a bar. The bartender points to the door and says, "We don't serve your kind here!" The poor little 'shroom replies, "Hey, I'm a fun-guy!" Look at those plump ones... don't they remind you of the Fantasia animated mushrooms? So cute.

Hey. What's up with the rail passes? You pay for a rail pass, but then tickets or reservations are a separate fee? Is that right? Are there many six seater rental cars? Should we go to Hawaii, because I am really tempted at this point. Blah-blah-blah... Brain Strain!
Posted by Natalie, the Chickenblogger at Thursday, April 09, 2009 15 comments

Links to this post
Email ThisBlogThis!Share to TwitterShare to FacebookShare to Pinterest
Labels: Chicken Abroad, Europe, Explorers, Picture, The Blog, What I Think

TI, A Drink With Jam and Bread

Irresistibly bloggable. I would have been delighted to see this in person and I am very grateful to Gretchen for sharing this spoonful of sugar... a nice perk in my day.
Posted by Natalie, the Chickenblogger at Tuesday, April 07, 2009 6 comments