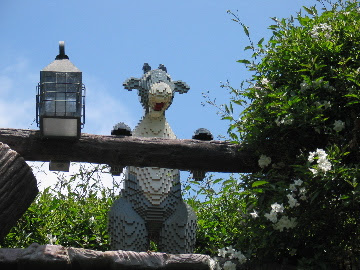 Continuing our Summer vacation album...we went by Legoland this week. If we did not live in the "neighborhood" already we would have had to move within driving range of this theme park. No other toy or subject holds our boys' thoughts and hearts the way Legos do. I won't bore you with my master's thesis: "Why Legos are Educational and Very, Very Good for Life." If you could see the three dimensional Lego Yoda bust decorously featured in our living room then you could begin to comprehend what I am dealing with.

We stopped at the big tent sale, so the boys could drop off some of their hard earned cash, in exchange for more building sets. I must say it is a genuinely cost saving, consumer friendly sale. Then we went to the newly opened BIONICLE Evolution. It is a room devoted to BIONICLES, like an interactive museum.

They can sit at tables and build Pohatu Nuva and Onua Nuva.

This is Alex's favorite theme.

William is the resident BIONICLE expert.*

We went up to Castle Hill. William rode the Dragon Coaster. We all climbed and ran through the rope ladder, moving bridge, play center. In Mini Land we took a peek at the master builders, and saw that they are busy developing a camping theme; complete with a bon fire and RV, tents and a little propane stove. Creative themes and models are everywhere at Legoland. 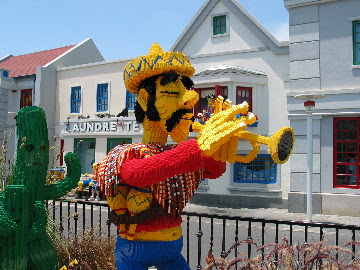 I love his beaded poncho.

A day at Legoland leaves the boys refreshed,inspired, and eager to return to their own Lego room at home. I think I may offer them their first Lego model commission: A few charming farm animals in the garden, bringing together two of our passions. 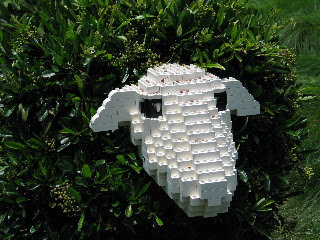 We could add chickens too. 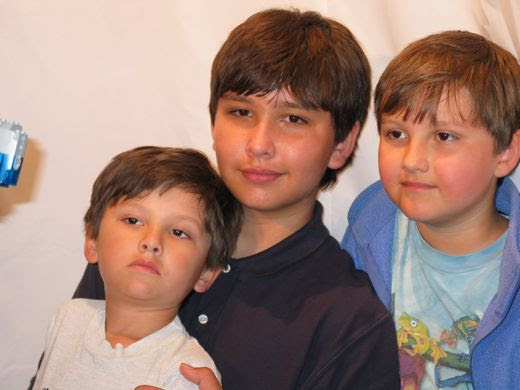 Max, William, and Alex.
Posted by Natalie, the Chickenblogger at Friday, June 27, 2003 0 comments 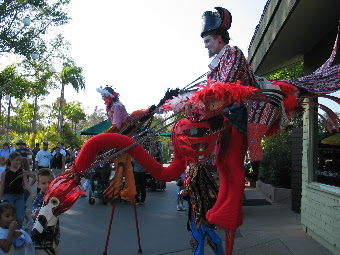 We have no formal vacation plans, but living in Southern California, one doesn't have to go far to find some Summertime fun. This week we popped over to the Zoo to enjoy the extended hours and new attractions. We did the bus ride for a general overview and then we set out on foot to see all of the snakes and lizards at the reptile house. The snakes were very active and we had extremely closeup views of slithering cobras, vipers and rattlesnakes. Max learned to distinguish the venomous snakes. And we were all impressed with the aquatic snakes that drape themselves vertically among submerged plants, and perfectly camouflage alongside the roots and stems.

Visiting the Children's Zoo is always worthwhile. There were three different kinds of wild kittens in the nursery, including lynxes. They are big eared, frisky and adorable. Alex found the wombat; very large, very asleep and not a bat, which is what he expected to find in the dim cave. Max found the meerkats to be the most endearing and he has proclaimed the meerkat to be a suitable pet for our family. He also enjoyed the petting zoo. Now this is one pet I would seriously consider for our Rancho; just think of the mowing capability! Either a La Mancha or a Nubien... 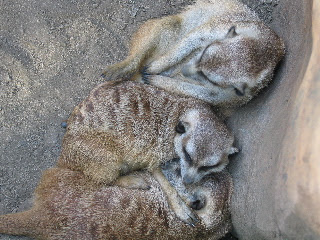 Very cute, but I think we'll leave them at the Zoo.

The Zoo is always best appreciated early in the day or late in the afternoon; everyone is more active and interactive at these times. The orangutans were climbing and socializing. Some were even interested in their visitors. 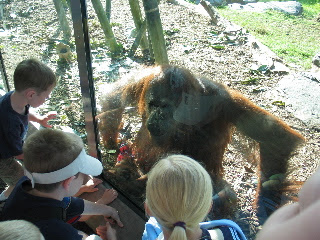 She made the same faces and expressions as the boy in front of her.

There were many babies to appreciate including a zebra, ducklings and the kittens I mentioned. We enjoyed watching this mother peahen with her chicks. 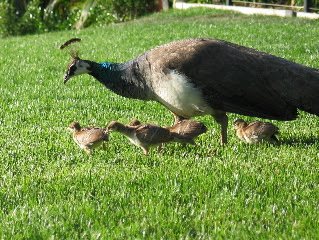 William has a few suggesions for future excursions, Alex too. Max is our reluctant tourist, but eventually he finds a silver lining, or popcorn. We want to visit another pond, maybe camp out some more, hike to the creek again, ride our bicycles up and down the hilly neighborhood streets. Of course there is swimming too. No formal plans, but plenty of fun just the same.
Posted by Natalie, the Chickenblogger at Thursday, June 26, 2003 0 comments

Chicken Blog was highjacked. With little or no warning our domestic security was breached and we were "Code Hildi." Geoff is not merely talented, bright and generous; he is also an unpredictable prankster. Of course I was his willing victim. If he wants to believe there is a physical resemblance, okay, but if he dares to infer that I would go after someone's walls with glue and straw, or saw heirloom tables in half, then he's gone too far. If you've never seen "Trading Spaces," none of this makes any sense...no worry.
Posted by Natalie, the Chickenblogger at Monday, June 23, 2003 0 comments

Email ThisBlogThis!Share to TwitterShare to FacebookShare to Pinterest
Labels: Chicas 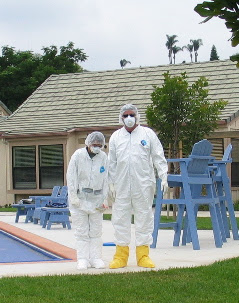 "Take us to your Chicas."


Well, if anyone doubted the gravity of our quarantine or thought Exotic New Castle Disease was an ailment of Lotto winners, here's proof that the USDA ain't foolin' around. Right up there with Monkey Pox and Mexican Fruit Fly, this chicken sickness has had everyone on high alert.

The vigilance and precautions are paying off, and in hopes of lifting the quarantine the USDA and California Department of Food and Agriculture are visiting farms, and even little Ranchos, so they can test the flocks for the disease. Each bird is checked for symptoms (depression, diarrhea, droopy heads, sudden death) and then swabbed in the posterior. 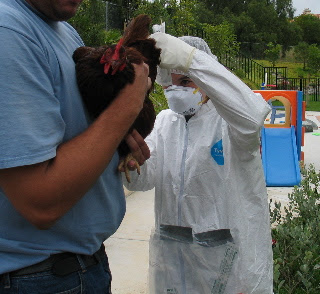 The two scientists don a new suit at each stop, because the disease is highly contagious and can be passed from the soles of shoes or the seat of your pants. Once the testing was through, they double bagged their outfits and sprayed disinfectant on everything. They were much friendlier than the first pair of workers that came to warn us about the likely deaths of our chickens and put us on quarantine: "No transporting birds, feathers, bedding, eggs, or equipment, and extreme caution and decontamination if visiting any other birds." Even the Wild Animal Park has been on watch. There is still evidence of the disease in Los Angeles, which means it did spread north, but it appears to have been contained here. 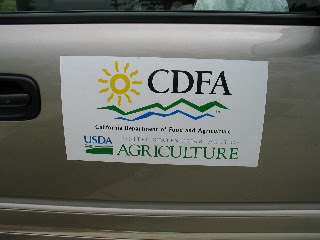 The best part? They loved our Chicas! "Wow, they're so tame. They come when you call them!" And they were impressed with the luxury accommodations our free ranging Chicas enjoy. They thought they were surprisingly healthy looking and were very optimistic about the test results. We will only hear from someone, in two weeks, if the results were not good. At that point we would be offered "fair market value" and the Chicas would be taken away. I am feeling quite confident, even a little bit "cocky;" these Chicas are adored and pampered, spiritually fulfilled, disease resistant super hens!
Posted by Natalie, the Chickenblogger at Sunday, June 22, 2003 0 comments