Wish I Were There 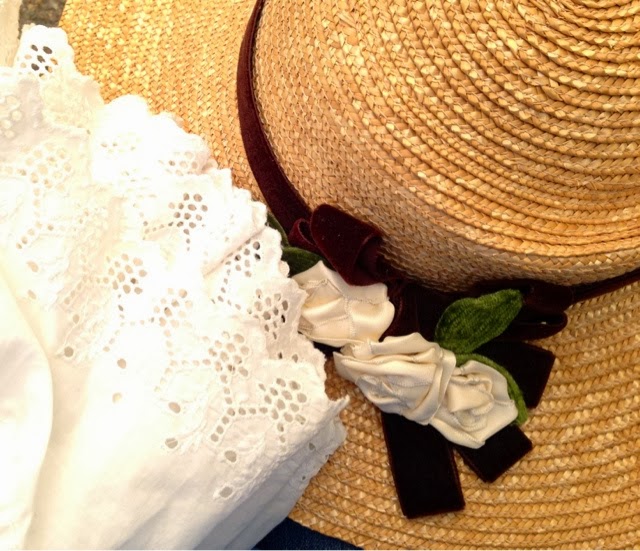 Thinking of my grandmother Eunice, my mom, my aunts, my cousins... all my family, and wishing we were with them in Pasadena.  It was to be all hands on deck to help with the big moving sale, but since aunt Becky and Grandma came down with bad colds, Mom advised us to stay clear.  I appreciate avoiding anything that might complicate keeping the kids on course in school, but we are sorry to miss out on the early road trip north, the hugs, pitching in, sharing laughs.  I'm glad they have Gretchen and Hans to lend capable hands... those two are making remarkable contributions to the big plans aunt Becky has.  Their generous work makes me feel relieved for my grandmother and aunt, and grateful, too.
It's not only missing today, but reminiscing on a lifetime of Alhambra and Pasadena visits.  Whittier, Los Angeles, Olvera Street, too.  Hot summers, the smell of gardenias, the cooing of doves, riding our bicycles around town, buying fireworks, the icy cold pool on Workman Mill Road, out-running Chiquitin and Major!  Enjoying rainbow raspados, sitting around the fountain in front of Big Al's shop.  New shoes, and Sunday school, rides around the old places, El Salvador.  Even street names recall stories, and make me long to be around the kitchen table with the family and hearing, again, the stories, reconnecting to people I love, through the places they've lived... Silverlake, Eastman Avenue, El Molino, Primrose.
I wish I were there, moving boxes, making sales, holding Grandma's hand, hearing about new plans, new street names, and enjoying one more Los Angeles day with my family.
Posted by Natalie, the Chickenblogger at Saturday, February 22, 2014 4 comments 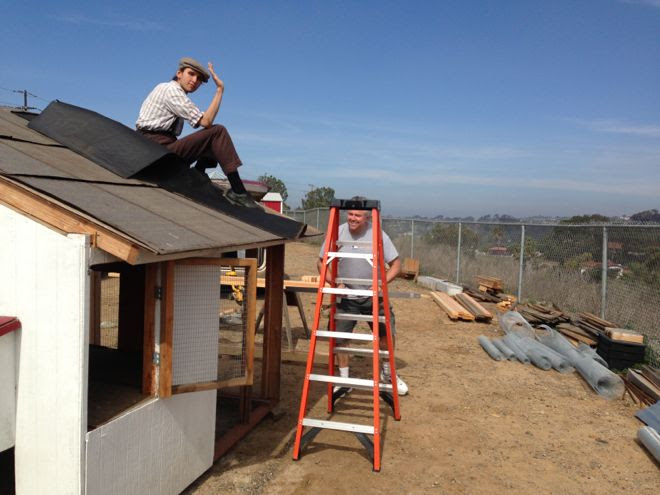 A single photo - no words - capturing a moment from the week. A simple, special, extraordinary moment.
A moment I want to pause, savor and remember.

If you're inspired to do the same, leave a link to your 'moment' in the comments, for all to find and see.
Posted by Natalie, the Chickenblogger at Friday, February 21, 2014 8 comments 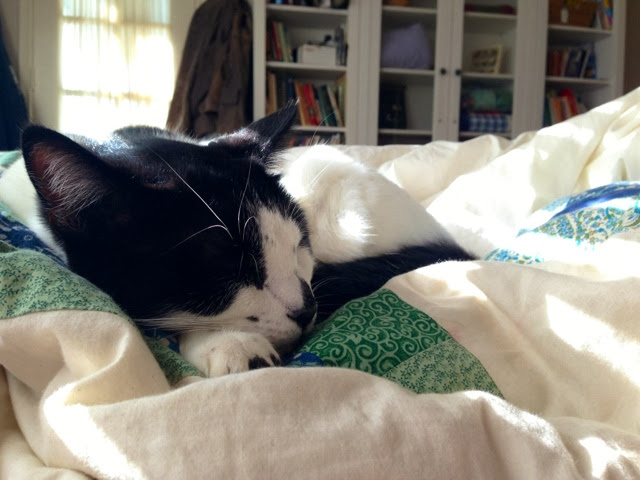 Never mind how I feel, look who's keeping me company and giving me comfort.  Mister Washburn Foo, heating pad, and sympathetic friend.  He does a world of good.
Posted by Natalie, the Chickenblogger at Thursday, February 20, 2014 6 comments


What I'm making is not so good… I've got twelve years of proof. But it's "normal?" Still hoping to close the gap.
Posted by Natalie, the Chickenblogger at Tuesday, February 18, 2014 4 comments

Links to this post
Email ThisBlogThis!Share to TwitterShare to FacebookShare to Pinterest
Labels: Pointless, The Blog, Web, What I Think 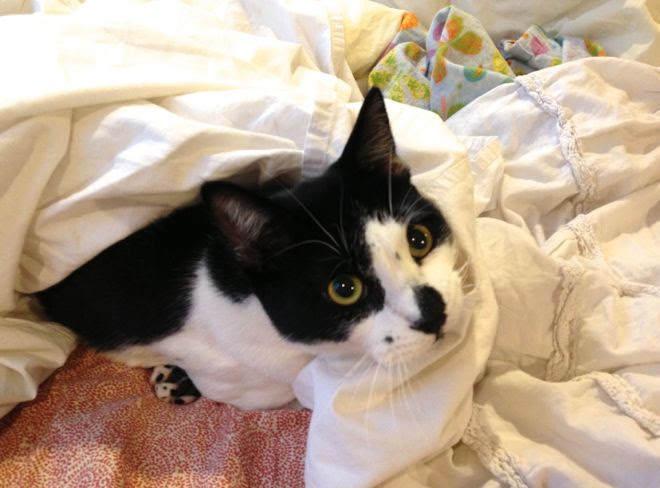 Good morning? Depends. It's all about the agenda, and who's in charge… yesterday Maria and I were up and giggling and out of the house bright and early. We were on our own clocks, and enjoying our own plans, and that makes all the difference. We didn't mind the cold, the hour, we were eager to get up and go. Then, along comes a school morning, and ooffft it's too comfortable in bed, and too cold in the kitchen, and we feel sluggish and bleary eyed, and reluctant to face the day, the the week. And to make matters worse, to torment our disheartened souls, there's Mister Foo, a furry, purring, warm heap playing in our pajamas, and he looks up at us and implores Meow… Don't leave! Stay a while and snuggle, yes? Yes! Yes, Mister Foo. We would so dearly love to stay home and snuggle.
Posted by Natalie, the Chickenblogger at Tuesday, February 18, 2014 2 comments

Links to this post
Email ThisBlogThis!Share to TwitterShare to FacebookShare to Pinterest
Labels: Gatos, Laugh, Life and Details, Maria 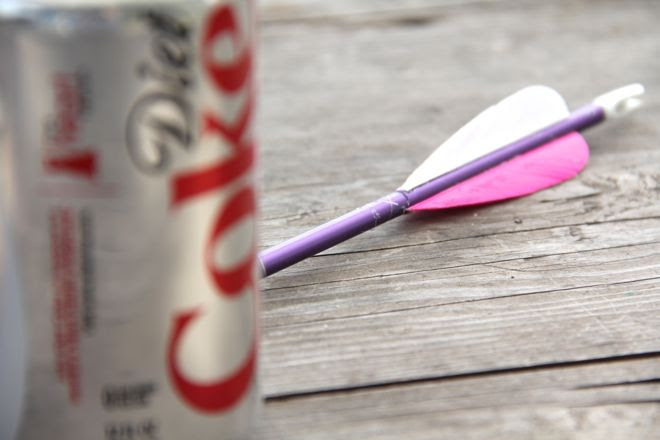 What did you do for your long weekend?

We watched Argo, made pizzas, dropped conversation hearts into tonic water, cleaned the kitchen, dug a really big hole, drew plans for Hobbit homes, and wizard towers, visited the metal shop, weeded the school farm, worked on a chicken coop, sat with chickens, made a puppet, modeled a skip on 3D Studio, worked in an office, took Avengers quizzes, Googled what Presidents ate, and shot diet coke cans, and stuff.

Was "and stuff" ever a regular part of your speech? I was just struck with the memory of applying and stuff to practically any statement I could utter. It was shorthand, vague, and yet succinct. I like totally used and stuff when I was talking about my day, and stuff. Max is good with the bow and arrow. 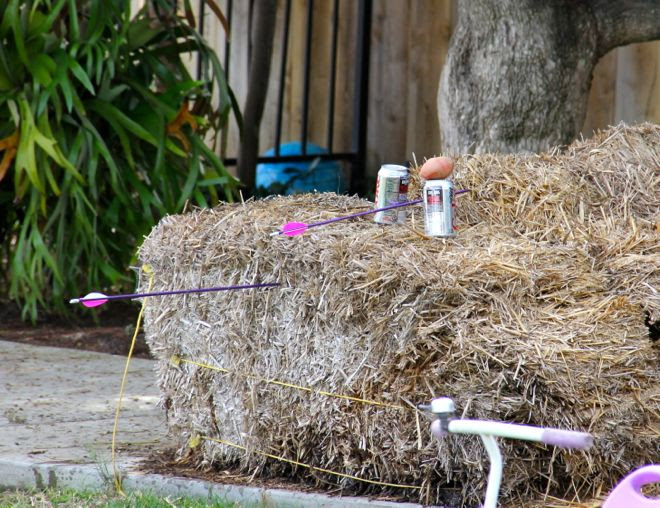 I'm not sure what the potato is for… well, it does add something to the shot... 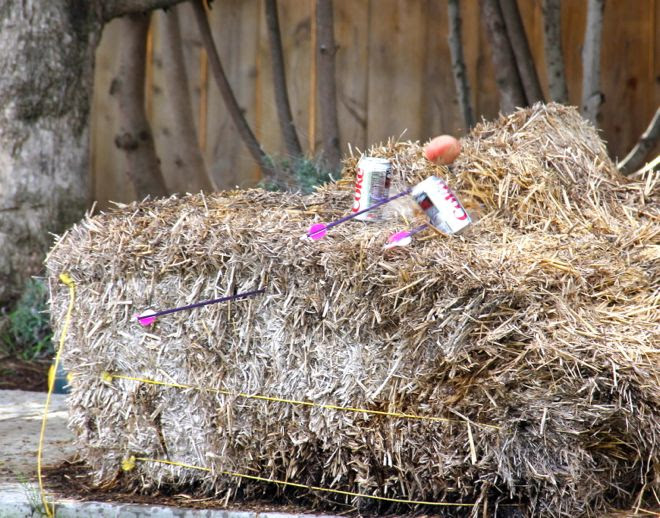 The potato flying up is almost as cool as seeing the arrow hit its mark! 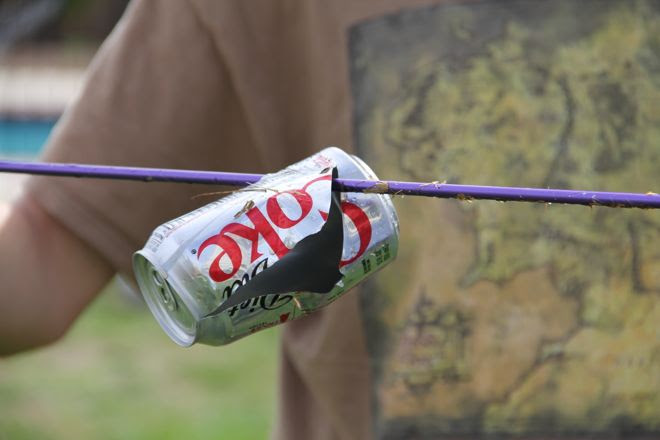 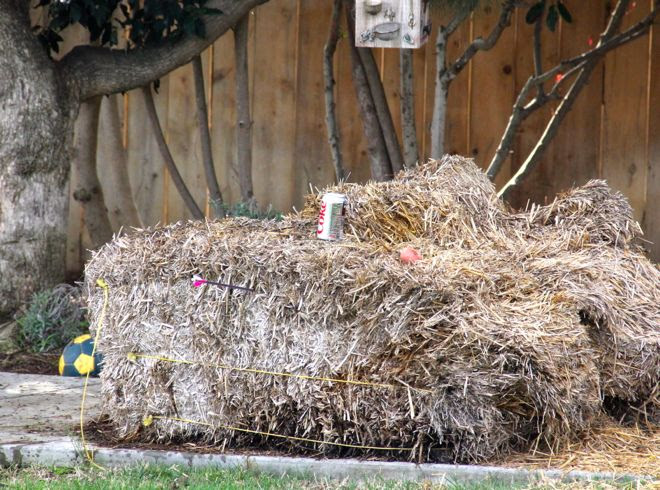 The last can, and William has Red Ryder loaded, and cocked. Ready, aim, fire! 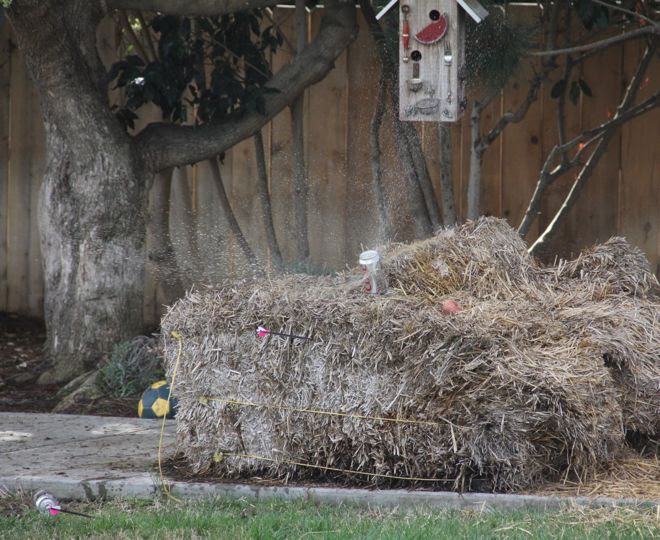 First, it was a fountain... 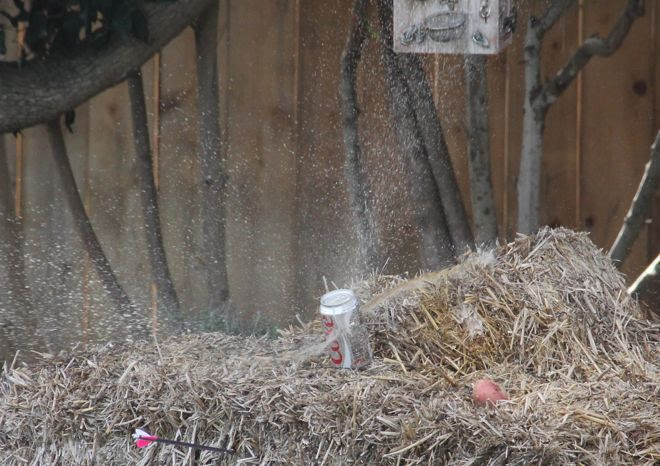 Closer up, we see a big stream gushing at the points of entry and exit. 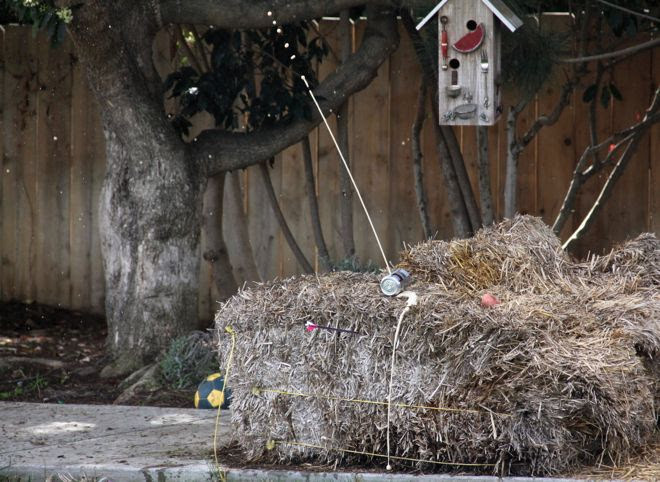 The finale was long streams of old pop going up, and down. That was seriously fun.

1. Long weekends. That was an easy one.

5. Puttering around the house with family, and stuff.

Share your good things, and stuff!
Posted by Natalie, the Chickenblogger at Monday, February 17, 2014 5 comments