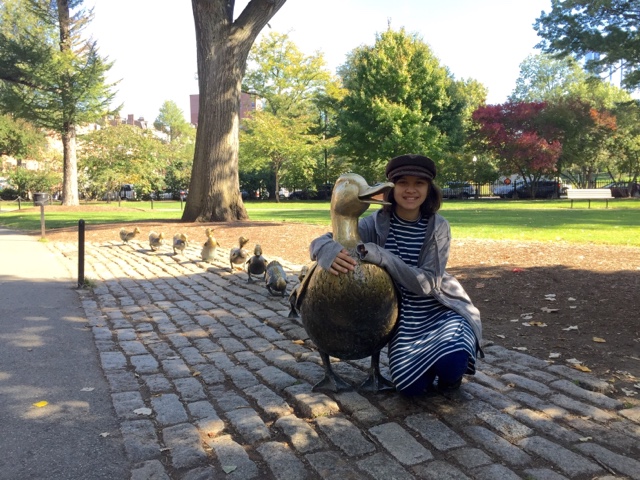 In the Public Garden, where Robert McCloskey's darling book, Make Way For Ducklings, is honored. After reading this book to our four children, over twenty-five years... I felt like I was walking into the story. Only the swan boats were missing... Stowed away before wintry weather arrives, otherwise, these are just a few moments in a truly wonderful day. 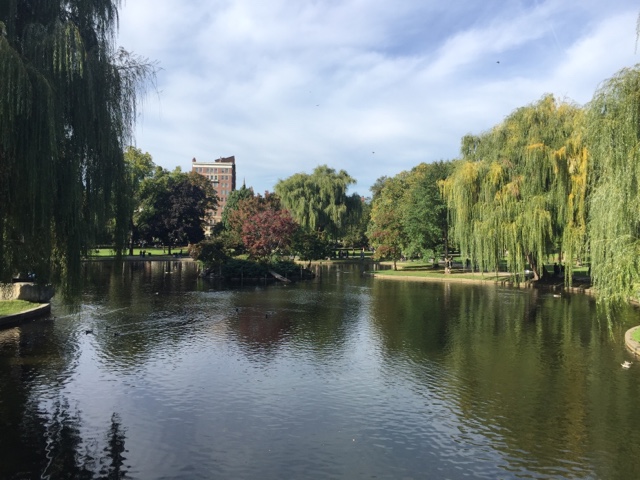 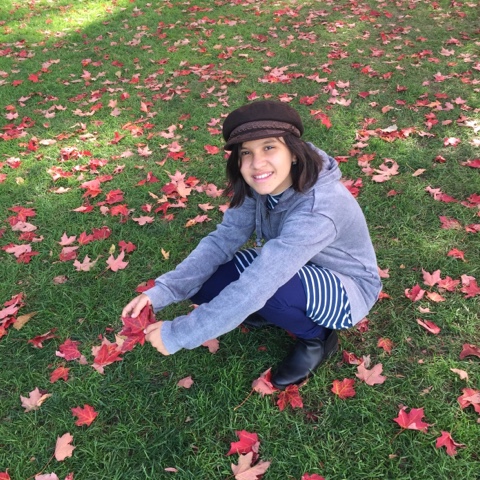 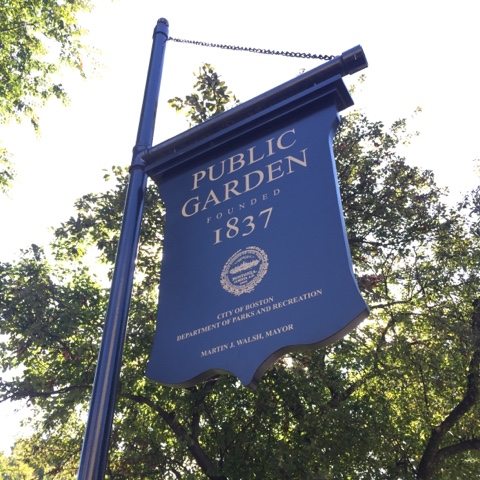 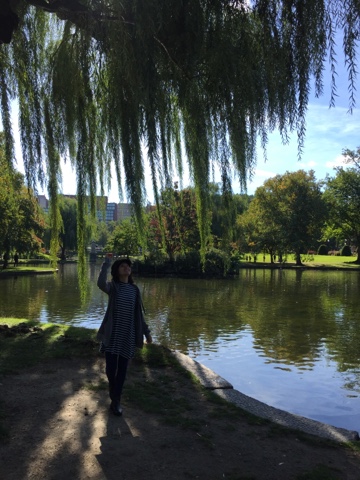 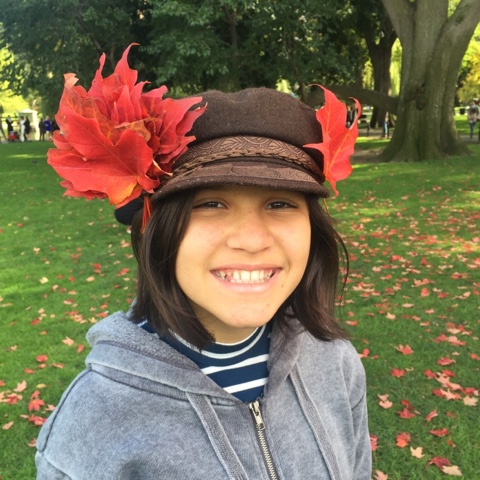 Picture a Day, with Infinity More Monkeys~
Posted by Natalie, the Chickenblogger at Saturday, October 15, 2016 0 comments 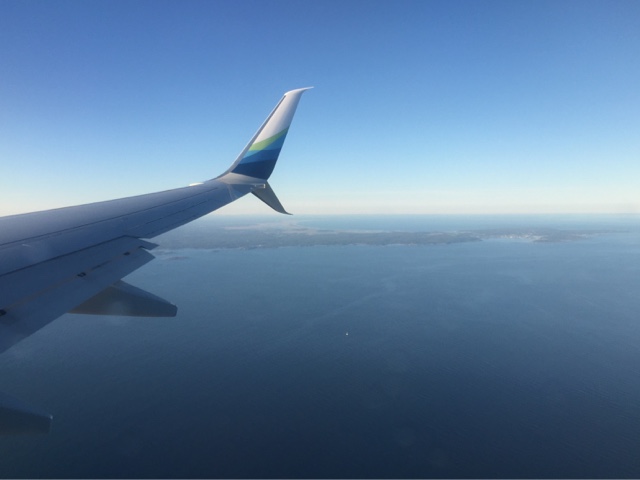 It looks old and busy and charming. We saw the Charles River and little islands. We rode under the harbor. Worcester is Woost-a. The moon rose between tall buildings, and almost full, it's shining overhead. We can see our breath in the night air, fallen leaves are everywhere. From the plane the world looked splashed in swaths and laced trails of brilliant orange. And I can only begin to describe the warmth and grace of our hosts, their home, the way it feels to be here... Magical and comfortable, familiar and good. Can you tell I'm breathless with... with, what's the word? I feel excited and eager and relieved and very much like a lucky winner. A lucky, lucky winner.
Posted by Natalie, the Chickenblogger at Friday, October 14, 2016 1 comments

We agree, Cairo is black, and white, and pink. But what color are his eyes? Geoff decided that the Boop's eyes are amber. I've been saying kitty has eyes the color of honey mustard. Ah!, but in these pictures I detect a hint of pale, luminous green around his pupils.

{A comma following an exclamation mark? I know. It's not proper, but I can't remove it. I rather fancy the tone it imbues and I feel grammatically wanton.}

Do you know who else is shameless and disreputable? This furry fellow with amber-honeyed green eyes! He absconds with my yarn, and builds elaborate webs across our entry. Someday, he'll catch something in his haphazard net, but for now, he's only catching recriminations.

He has no idea he is a wanton and willful beast. He is only his own self, a Boop. He carries plush mousy toys in his mouth, follows birds from the screened porch, kneads and nuzzles necks, greets guests with sleepy eyes and a meow that sounds like a pip or a chirp. He tumbles over Chango, and crashes into Foo. He tries to fit into squeezy spaces, and misses his landing, but he looks awfully adorable making the attempt. He sleeps on his back, which is the most adorable of all things, because it shows there is still trust, faith, and confidence in the world. No cynicism or jaded impressions have taken root in his heart. So, languid and secure, he stretches out, the softest bits exposed and at ease. He purrs, his breath rises and falls, hypnotically. He is black, and white, and pink, and every shade of beloved.


With Infinity More Monkeys, a picture a day.
Posted by Natalie, the Chickenblogger at Thursday, October 13, 2016 3 comments

All is well on the little farm. Some of the hens have begun a molt. The ground is a bed of leaves, pine needles and feathers. It looks like an artists' canvas, a romantic fabric print. Fiona has been requesting quiet time, away from the flock. I think she's been feeling under the weather, and it makes me anxious when a hen is unwell, but sometimes the very best thing that can be done for them is to give them what they seek... space, time, some extra attentive care. I've been letting her enjoy private dust baths, longer visits beneath the bamboo, and thankfully she is looking brighter, pluckier.

The goats won't molt, but I will start watching them for signs of a cold winter. Tasha's beard may grow longer! Ada grows an extra coat of wooly fluff beneath her corse hair. Maria once brushed out enough wool to collect, and then she combed it to separate the roving wool from the straight hairs. With the long hairs she made a paint brush, and then she felted the wool! It was a funny brush, and a very small piece of felt, but a fine experiment for a young girl on a little farm.

Since joining Instagram, I've found where many of the bloggers I used to follow disappeared to, and discovered that keeping chickens, and goats is practically synonymous with the app. In spite of my years at this pastime, with my infatuation, upon browsing the hundreds and hundreds of postings, I feel like an utter chicken novice, again. And too, I cannot deny, I feel a bit long in the tooth, redundant. My goodness there are a lot of gifted, talented, hard-working, prolific people sharing their dishes, their art, their musings, their stitches and yarns, fallen leaves, and chickens! I never fancied myself a 'standout,' but it does feel rather silly to go prattling on, when it's all so eloquently, vividly covered, already.

Three-hundred and sixty-five minus two-hundred and eighty-seven equals seventy-eight. A Picture a Day has been a happy project, and I don't mind seeing it through to the end. After that... we'll see. Maybe the new year will be for 'A Picture a Week.' Maybe I will pursue something all together new.

With Infinity More Monkeys, a picture a day.
Posted by Natalie, the Chickenblogger at Wednesday, October 12, 2016 1 comments

Email ThisBlogThis!Share to TwitterShare to FacebookShare to Pinterest
Labels: Chicas, Farm Report, Goats, Picture, The Blog, What I Think

In the Hall, On the Wall :: Two Hundred Eighty Six

Looking at the things I pass everyday, many times a day. Just one spot of our funny, dear, busy, comfortable, sheltering, creative, generous home.

With Infinity More Monkeys, a picture a day.
Posted by Natalie, the Chickenblogger at Tuesday, October 11, 2016 1 comments

The light is fading, as we would expect in Autumn, but there is still enough heat for the green beans, the eggplant, too. Not a lot to harvest, but I think we can make up a good dinner, and that will be nice.

With Infinity More Monkeys, a picture a day.
Posted by Natalie, the Chickenblogger at Monday, October 10, 2016 0 comments

The tree in Bambi's yard has been haunted. Sculpted beings, wrapped, illuminated, are inverted and suspended. Alex can make striking figures with a spool of wire.

With Infinity More Monkeys, a picture a day.
Posted by Natalie, the Chickenblogger at Sunday, October 09, 2016 0 comments