Look What The Tide Brought In

A Full Day of Procrastination and Other Deep Thoughts 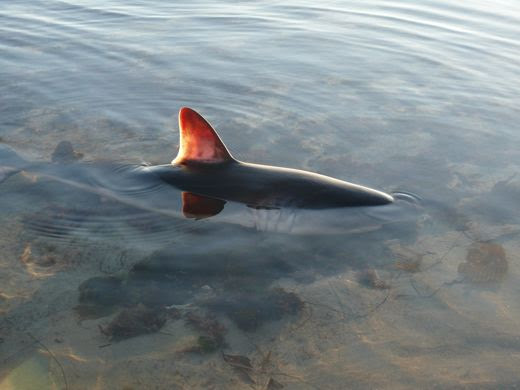 This photo and the video really belong with a post I made in January. It was low tide season... there were some great low tides last winter, and we kept making amazing discoveries. The most surprising being this shark. Was it a great white shark? I consulted the life guards in Solana Beach, after the recent attack on a swimmer. They were fairly certain it was a great white, and so were the people on the beach with us when we saw the little biter. 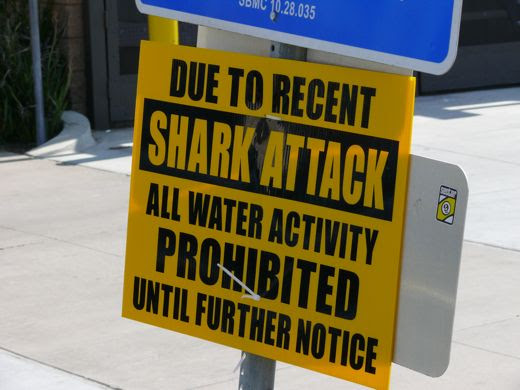 The shark was in very shallow water and obviously losing it's fight trying to get back the open ocean. It was fairly subdued when 2 young men carried it, in stages, back to deeper water, but if it had not been worn out, I don't think it would have been so cooperative. I guess I would say it was the size of a small, strong, willful toddler, but with more teeth. Here is the video I captured... one of those instances where I had to curb my photography appetite and comfort Maria, who was very distressed by the sight of the shark.


It was kind of surreal walking up to the pool and seeing an actual shark. The beach was not crowded. Next to us was another family, 2 college students, and 2 monks in flowing saffron robes. Everyone was concerned about the shark's predicament 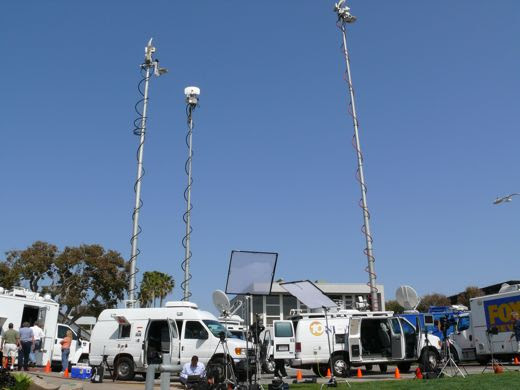 Friends were asking to see the video of the little white we saw in the tide pools. Their children surf in the area, and I think most of us surf or swim in these waters too, so yes, it does give pause. I can't say whether I've decided to be freaked out about it or not. I guess I am not worried, which is not the same as saying "no biggie." I don't surf, or swim very far out. After witnessing a little blood experiment conducted in a shark tank by my brother, I can firmly say I would never swim while bleeding. 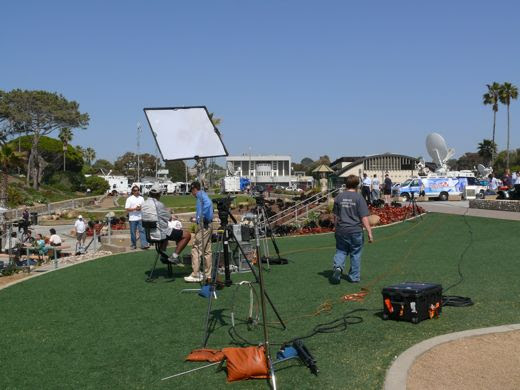 I am not the type of person that is comforted by statistics... more people are killed by bee stings etc... that sort of information only serves to make worry about more things, different things. Never bother me with replacing one risk for another; it only compounds fears. Truthfully, I could muster more alarm and panic seeing a swarm of media sharks move in and spread out... that was a feeding frenzy!

This was the final and successful attempt to get the shark back in the open water. I think that it is sweet to hear William remarking about this making 'an interesting blog post.' He knows my thoughts so well. Believe me, Chickenblog is a family effort that involves all of us in some capacity.

11:12 a.m.
Meanwhile, on the home front, things are starting to shape up. We have made inroads, sorted, reduced, diverted, recycled, dusted and spruced. The landlord inspection commences Saturday at 9 a.m., and despite frequent bouts of procrastination, mingled with depression and angst, the house is beginning to look respectable. As I cleared the dining table from breakfast, a thought bubbled to the surface: We should go out to eat, so the kitchen stays clean. No, we should stay in a hotel and go out to eat; that's the secret to keeping the house unlived-in clean. And finally, my mind produced this ultimate gem: We should move out of here. Then it would be really, really clean. Crap... I am procrastinating again.

1:11 p.m.
Paid bills. Served lunch. And hounded Alex. He needs to finish his wiring diagram. He is entering the science fair with a robot-remote controlled vehicle he has been working on. Last night he finished his report, and this morning he added the finishing touches to the illustration he made of parallel wiring. Do you know about parallel wiring? Tomorrow Alex will post on Chickenblog. And tonight we will all be at his home-school center to see Alex demonstrate his creation. All, except for Geoff, who is deeply immersed in crunch mode and working 7 days a week and coming home long after my bedtime.

After the science fair, energy permitting, I will hustle over to Linda's house for a bit of MNO... something I have not had much of this year. This means driving from point A to point D for the science fair, then driving back to point A and dropping off the boys. If Maria is still awake, she and I will head to point C for the company of friends. Point B is the place between Points A, C, and D where I stop and ask myself What is the meaning of life, and where am I going?

This may be point B: I seem to be avoiding something... must clean, must clean...
Posted by Natalie, the Chickenblogger at Thursday, May 29, 2008

You seem to spend your days like me -- procrastinating about cleaning....

I remember your January shark encounter! We have never seen a shark locally but they are out there. I, too, try to put it out of my mind and I don't surf and don't swim very far out. Jellyfish are more a worry, if we're worrying. But I just love that people want to rescue an animal in danger, even a dangerous animal. Times really have changed.

And despite what you feel as a lot of procrastination, you clearly are getting there -- making headway and getting there. it will all be ok, and just clean enough. Can you say more yet about the trailer/land deal?

Can I just say how wonderful and lovely and enchanting your posts are? Even the ones about procrastinating and Garage Mahal. And especially the ones about adorable chica tail feathers and widdle wabbit mouths and.... Hugs.

Sharks....shudder...my one phobia. Makes no sense as I live in Northern Michigan but who says phobias have to make sense?

Cheers for Alex's science fair. How proud you must be of him!

Weee, videos! Thank you for all the videos. :)

Oh... seems like I'm the only one who have problem viewing the videos.