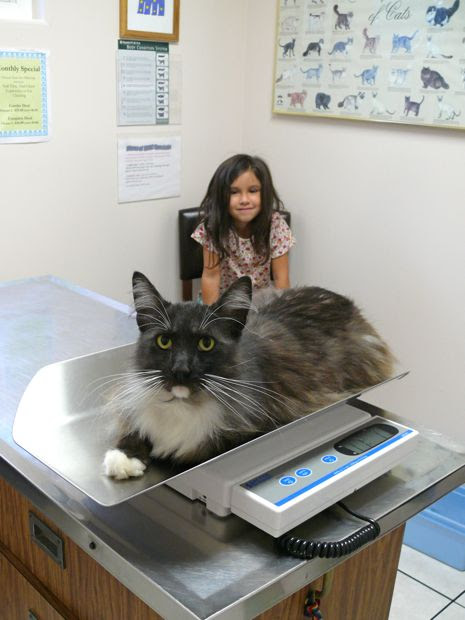 We have the best veterinarian in the whole wide world. I have said: We have pets so I can visit Dr G. And I mean it. I have often wished Dr G were a pediatrician. And I mean it. If it were possible I would bring the children and the cats to Dr G.

He is so attentive, and he has an amazing ability to sooth even the most restless pet. Look at Benjamin! Seriously. He is totally under the hypnotic and wise influence of his good doctor.

We have been visiting our vet since 1996. His wife is an attorney and her office is upstairs. When our dog was hit by a car on Halloween night, Dr G came in to the office and insisted on staying with her until the next morning. He saved Mitzi's life (yes, we had a dog named "Mitzi"... she was a six year old rescue dog, and I never knew how uncomfortable I could be with a name, until she ran away from home and we had to walk our neighborhood calling "Mitzi!)

If we ever get a dog again I will name her "Eureka," or if it's a him, I will name him "Hoover." Would you care to guess why?

After he saved Mitzi, we gave Dr G a stack of children's books from us and our pets, for his waiting room... books about dogs and other pets. Technically it was our only venture into endowing a library. He still thanks us for those books. We still thank him for being one of the most gentle and kind persons we know. Maria read some of the books today. By "read" I mean turned the pages and narrated. I love it when she reads. 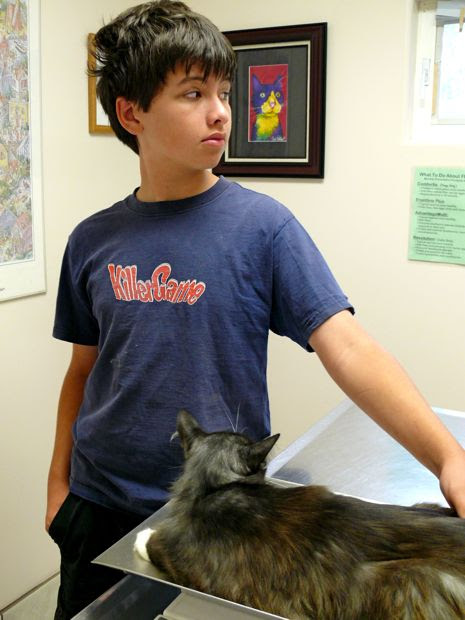 Benjamin weighs eleven pounds and one ounce. And he is healthy. 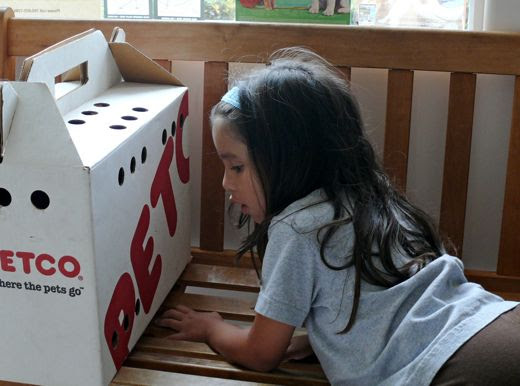 Chango's appointment was later in the day. He was camera shy. He lost some weight, but he's still a meaty cat... sixteen pounds of South American Mountain Lion. He is healthy too.

Thank you Dr G.
Posted by Natalie, the Chickenblogger at Monday, July 19, 2010

Hoover couldn't be because of the way he would eat??? could it??? LOL

My friends have a dog that, even though it isn't his real name, is called Hoover at dinner time ...
Yvette

Dr G. sounds like a wonderful vet! And Benjamin is so handsome getting weighed in!

It is always fun to hear emerging readers read!

Pretty kitty!! I can see where calling 'Mitzi' over and over again might make you give more thought to pet naming! hehe

I have a lovely vet also...Dr. Julie. She's very sweet and loves every animal everyone brings in. However, I'm not sure she would spend the night with a sick animal, but I could be wrong. Fortunately, I've never had to try that one out.

I'd say my Tobey is "hoovering" around 16+ pounds and he seems pretty healthy.

Your vet must be amazing. My cats would never sit calmly still that way in the scale. They would be careening around the room, trying to escape.