I Do Love Our Bad Kitty 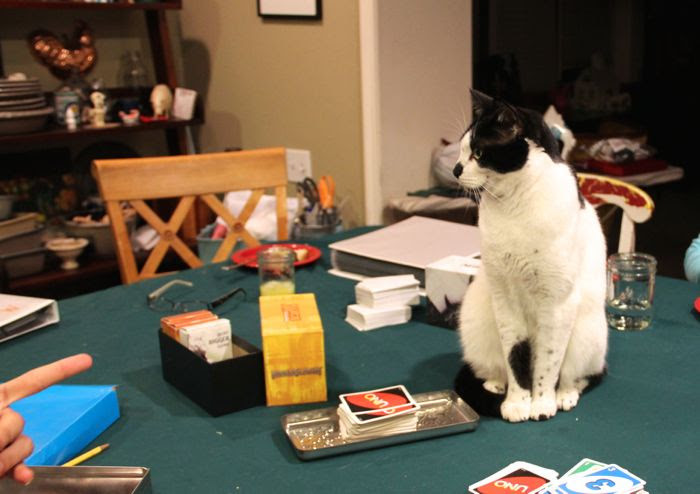 In so many ways, frequently, constantly, and dependably, Mister Washburn Foo demonstrates how to be a bad kitty.

He drinks from a bowl on the kitchen counter.

He drops to the floor, at your feet, just at the moment you are about to step out... especially if your arms are so full of laundry/lumber/homework, groceries that he can hardly be perceived.

He steals Lego parts, and hides them in clever little caches around the house. Always grey or black pieces.

He sneaks into my sewing basket and runs off with anything wool, never mind the needles and pins, which we have to search for in the wake of his destruction. Needle in a Foo stack!

He jumps on grandmothers, and great-grandmothers, kind women, small children, and sleeping bodies. He is unrepentant.

He torments Chango Biddy Bongo the Cubano Cat, and poor Chango is too old to do anything more than endure and suffer his usurper.

He sleeps on his back, in a heap of unashamed kitty confidence and contentment, tempting passers-by to indulge him with affection and cariños.

He poops two inches outside of the litter box.

When he gets outside, and knows he's about to be captured, he throws himself to the ground and rolls in the dirt, super-magnetically affixing all loose particles to his fur.

He indulges in all manner of uncivilized behavior, like parking his butt in the middle of a card game, then wears a smug expression, as though the game, or the company, is dissatisfying, or dull. 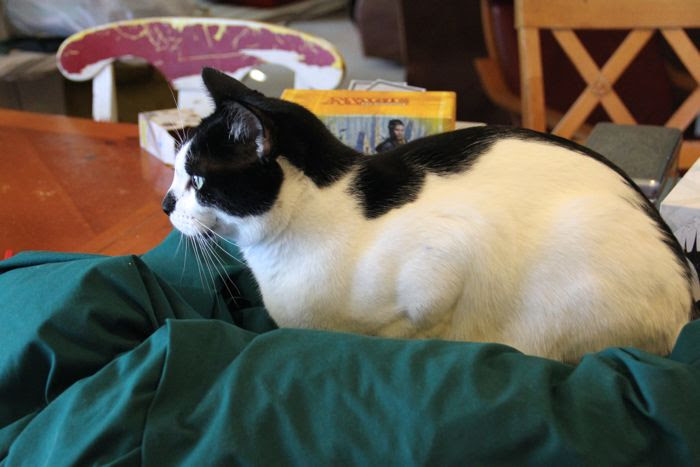 And when I decide to make the bed, sweep the floor, sort the laundry, do paper work, or take the table cover to the washing machine, he is there, eager and ready to spare me the trouble, because he is such a thoroughly, adorably, irresistibly bad kitty.

Posted by Natalie, the Chickenblogger at Tuesday, November 25, 2014

Email ThisBlogThis!Share to TwitterShare to FacebookShare to Pinterest
Labels: Gatos, Life and Details

Foo! Mister Foo! We love you!

Your list is long and yet I get a feeling it's not comprehensive. Those bad boys. We love 'em!