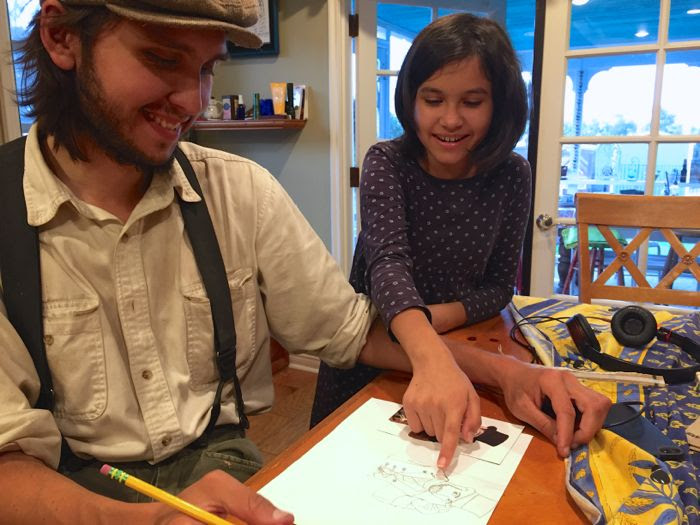 William and Maria goofing, enjoying their plans for an animation.

With Infinity More Monkeys, a picture a day.
Posted by Natalie, the Chickenblogger at Thursday, June 02, 2016

I'm safe, at home, and someday, I can imagine I will feel comfortable talking about flowers and twinkle lights, vacation plans, daydreams. But... never again with confidence, some hope that things are progressing, that our country has promise, good intentions. I will forevermore be alert, be suspicious, flinch involuntarily when anyone talks about America, the beautiful. Land of the free. I have been critical, even cynical, but now I have seen some of my worst fears about where Dam Tramp would take us... where he would kick and push us. He is a liar, a racist, a coward, a thief, a charlatan, a rapist, a villain, a tyrant, and he is defiling this country, and worse than all of that are the men and women who condone him, protect him, apologize for him, explain him, or simply close their eyes and say nothing. Christians, he is not Christian! We made armed forces attack peaceful protesters, he had a priest removed from a holy place so he could crawl out of his bunker, hold up a "a bible," film propaganda. He is not conservative. He is not strong. He is not leading. He is not helping or working for anyone but him, his family, and the sycophants that will stoop and grovel for a leg up, a nugget of profit.
Some people think that I am too emotional, too sensitive, and over share. Watch the video of American citizens, without warning, attacked by shields, batons, rubber bullets, poisonous gas... in front of our White House, in our park, on our streets, see the Australian media cornered and beaten. This is not hyperbole. These are acts of tyranny and unfounded violence against us, citizens, guests. I could not object enough. The beauty and freedom we hold dear is in terrible peril. We are on the brink.
June 3, 2020
Grief with fear, disgust with rage... how to sort my thoughts and feelings? Or keep up the volatile mixture? It keeps me awake, alert, angry, active. We are a racist country, lead by a racist president, and silence feels like complicity. I am listening... to people of color, to my own racing heart and anxious recollections, and I am listening for word from the friends that were vocal against Obama, vocal against my objections and concerns about Trump, vocal against a football player kneeling. And now? When imPOTUS says or tweets, or retweets, "A good democrat is a dead democrat, grab 'em by the pussy, Mexicans are rapists, these thugs, that son of a bitch"? Deafening silence. We must protest. We must object. We must be vocal and angry and stand against tyranny and hate, against injustice, and institutionalized racism, small racism, little racism, passive racism, 'he's just kidding' racism, 'can't you take a joke' racism, 'how dare they' racism, 'not to be racist BUT' racism. It's not okay. It was never okay.
May 29, 2020
For the second time, we received a wrong order from Amazon Fresh. And, can I just say... Not Our Order is easily becoming a highlight event of Stay At Home Season. Last time we got frozen pizza, and tofu, produce, apple juice. Revealing each item brought cheers and exclamations. Apparently, we love the unexpected with the random. This time, when Geoff opened our grocery bag and pulled out Wonder Bread... I blurted, "Oh, my f***ing A! What the what??" Because, apparently I love unexpected and random, but I also judge real hard. They sent us pre-fab taco shells, with square bottoms, and tiny bags of mini-muffins, too spongey to be made of natural ingredients. Life is like an Amazon Fresh Delivery, you never know if you are going to get some weird sh!t By the way, someone in the area is getting our Special K "with red berries." "Red berries" are natural, right??
May 26, 2020
4:12 pm