Media: a means by which something is communicated or expressed. 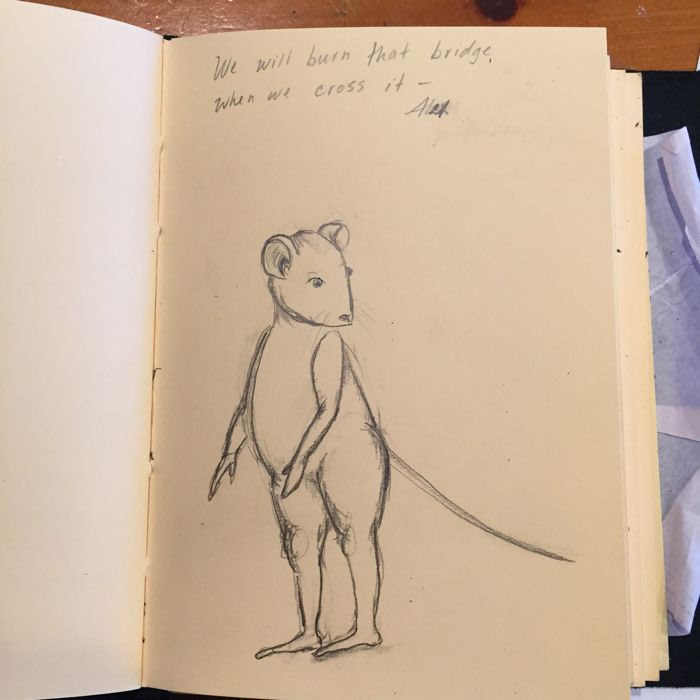 Pencils and paint have been my media, deliberately, diligently, since the end of December. And rats are the result, mostly. "Mostly," because that's mostly what I have produced, and because they aren't exactly entirely "rats." They're mostly rats, but also a little bit mousy, almost people-y. Maybe just, mostly weird.

Geoff wonders if I wouldn't like to introduce the rats and other sketches to an iPad Pro, go digital. If my drawings were scanned, then I could paint them and play with them. Hmmmm, thought I, and asked Alex to come with me to an Apple Store.

In the Apple Store (and no, they are not my sponsors, yet) I asked a genius to convince me to buy an iPad Pro. He did his best. I guess. But I was not convinced.

1. They don't let you sit at the table where the iPads are displayed, which is just as well because...

2. It didn't feel like I could get comfortable enough to hang out for an hour or four, and really immerse myself in their apps, exploring what I might like about being a digital artist... probably Apple geniuses don't want me hanging out for four hours?

3. Pencils are so much more affordable than digital media. I might not become a talented, income-generating artist, but it's worth exploring on a pencil and paper budget. I'd feel really donk if my art career tanked after investing in cool kids club. 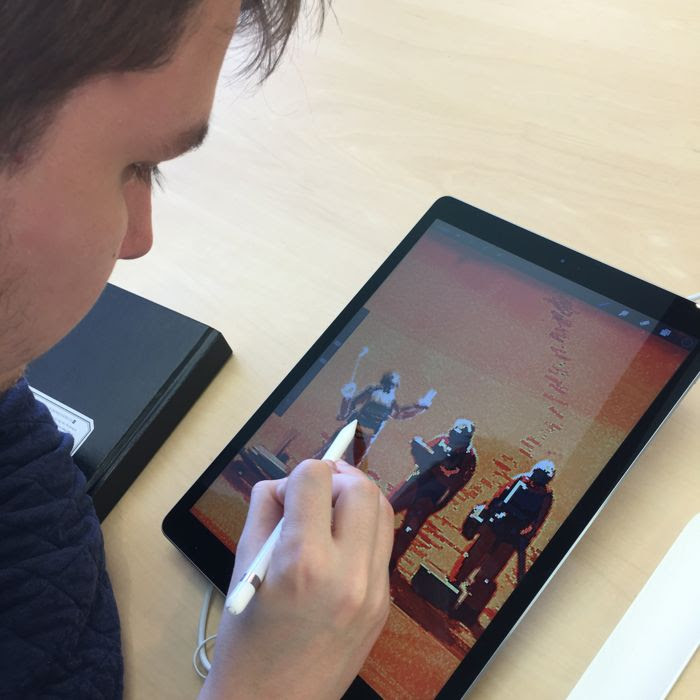 While we were there, Alex added a Martian to their digital art, demonstrating that he is definitely worthy of entry into the cool kids club. 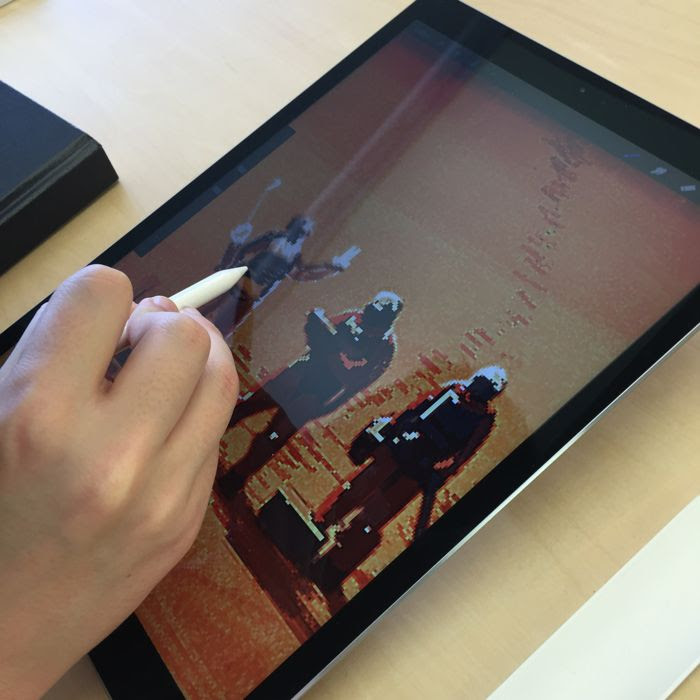 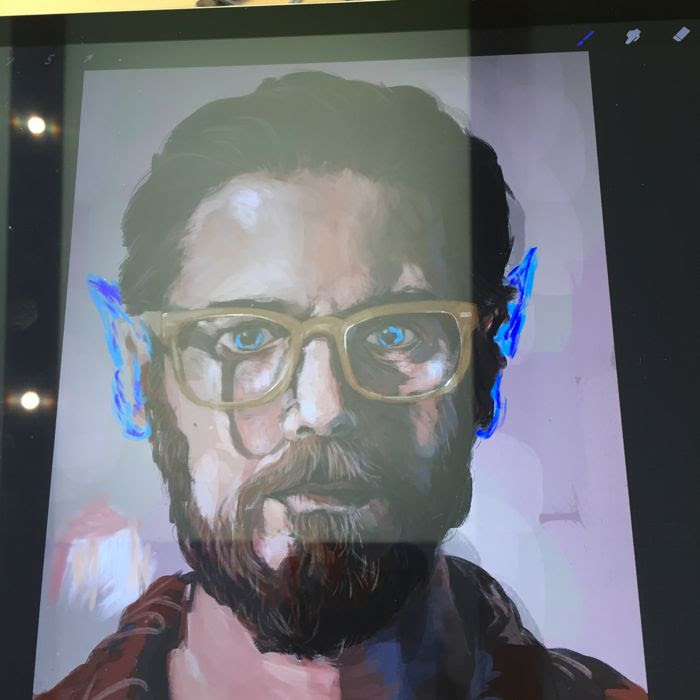 My skills, and artistic impulses are probably less... dignified? But I did have fun. 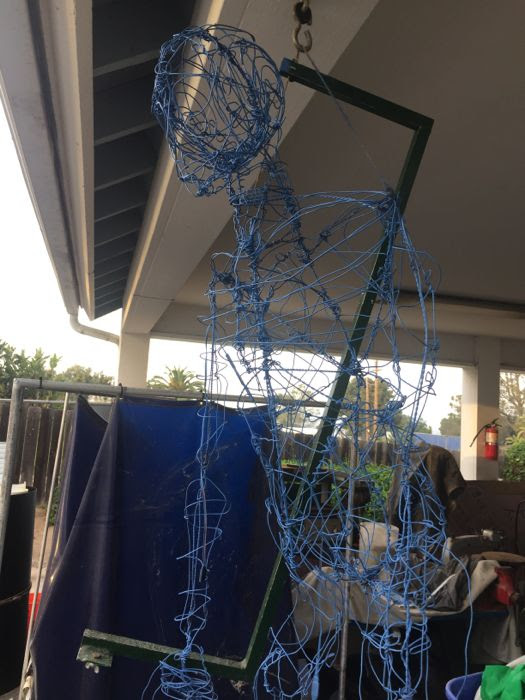 Other media... re-bar tie wire, and a can of spray paint. We gave our automaton robot sculpture a makeover, in blue. This is the wire sculpture Alex made for our Benevolent Order of Makers creation, Da Vinci Acrylic craft paints. The little cylindrical bottles. I like MS brand best, but the more I paint, the more I am convinced that it may be time to look into finding a better quality paint. Maybe. Or maybe I should look into trying out markers, like Prisma pens. 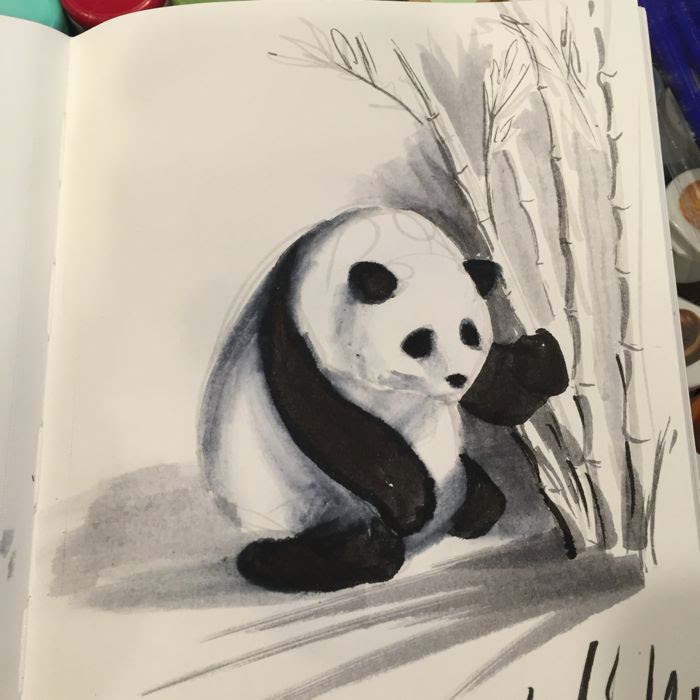 Alex likes Tombow Brush Pens, and so does Maria. This panda... it's really good, and a favorite of mine, but Alex reminds me that it was just a doodle he did (with one color) to test the pen. The results do a fine job of demonstrating that the brush pens are a cool medium for making art. 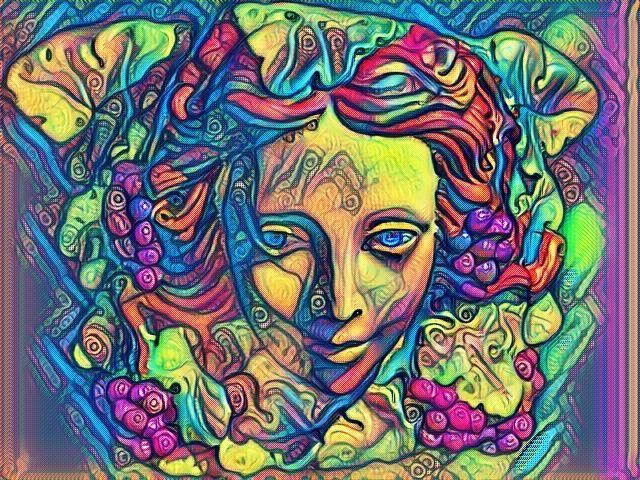 Other cool medium for making art... everything William did to achieve this image, which Geoff describes, "William experimenting with Deepart.io. He modeled these in 3DSMax, fed them through the Deepart.io neural network. He "hand" colored the models to guide Deepart's color choices. Next he's going to experiment with custom convolution filters (controlling the "style" of the resultant image). Now this... this is cool kid stuff.

With Infinity More Monkeys, a picture a day.
Posted by Natalie, the Chickenblogger at Wednesday, March 15, 2017

It's the making that matters, the time to sit and draw and create; I love how being immersed in a project or a medium not only beings joy in the moments of creation, but also how it gives me something inspiring to think about when I'm going about the rest of my day. So instead of just re-playing mundane events in my head, or worrying about work or the state of the universe, I can make space and time in the jumble of thoughts to think about what I'm making, and what I'd like to be making, and how I can make more, better. Do you find that, too -- that actively making opens up your stream of thoughts in non-making moments to more interesting stuff?

So many options, Natalie. I love it that you are surrounded by people who dabble in the variety -- stretching some limits and bending others.