Do You Say Crostata or Gallette or Jam Pie?

Our hens are motivated and ambitious in the egg department. I shared eggs, and will share more. I boiled eggs, and I can share those, too. Then I got everything together to bake quiches. And this is not a recipe, sorry, but even I wish I would write something down, because I make this up as I go, everytime. Hey, it's eggs, cheese, pancetta, leeks, spinach... what could go wrong? 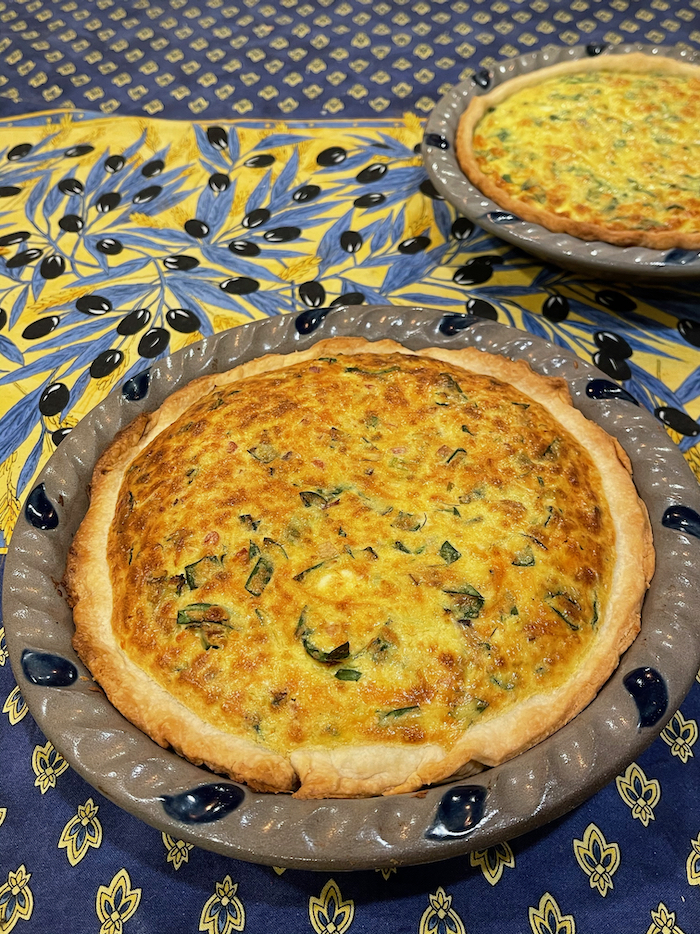 I made one of the four vegetarian, for William. They were super yummy. And, the bonus is I don't need to do anything for lunch today, nor tomorrow. Besides having extra quiche, I had a lot of extra pie dough, so I decided to improvise on another creation... something with jam. For as long as I can remember, going back to the little house on A Street, my mom let me play with the extra pie dough (she's always been a phenomenal pie baker.) My favorite thing to do was to cut out circles and add a dollop of jam to the centers. Over the years they've evolved, and I think of them most at Thanksgiving. Sometimes they are really too messy for pictures, and stick to the pan, but I don't care, because it's the little bite of nostalgia that I am after. They feel like a gift that comes from almost nothing... dough scraps and tiny teaspoons of jam, sometimes whatever was left at the bottom of an almost spent jar. Now, Maria makes them, which makes me happy... it's a gift to see something enjoyable shared, and passed down, to be a witness to generational connectedness through traditions. Well, now you have the backstory on our little jam pies... this time I imagined one big jam pie. I spied a new jar of Bonne Maman raspberry jam in the pantry, and scooped into a bowl, to mix with a spoonful of cornstarch. I rolled out the dough, put it on a parchment lined baking pan, and spread the jam in the center. Then I raised the edges of the pie dough to contain the fruit, brushed the dough with a beat egg yolk. Maria asked, Are you going to sprinkle the egg yolk with sugar? That would look pretty. Yes. Good idea. The quiche were coming out of the oven, and in went our big jam pie! 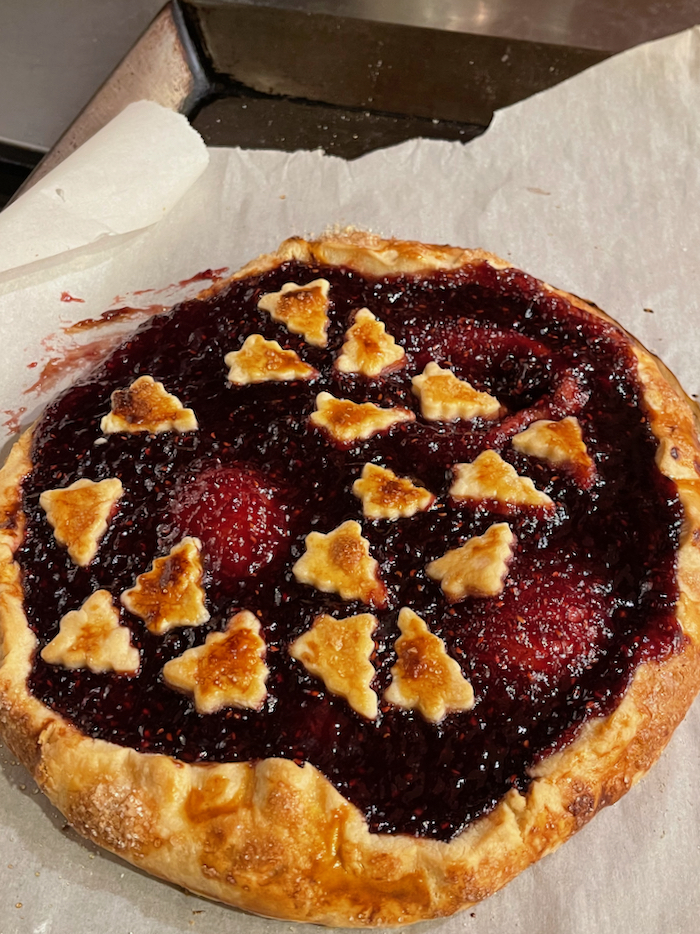 I forgot to mention the little cut-outs. I should have looked for a heart shaped cookie cutter, but the tiny tree one was readily available. I was worried the jam would be too sweet, and so the extra dough was dotted around, as trees, to balance sweet and savory tastes. Then I remembered the last bit of cream, from quiche baking, and I whipped it up, with a tiny bit of sugar, but again, mostly thinking to offset the sweet jam. Ok, I know it came out funky looking rustic, but the taste was every bit like the tiny jam pies I love so much! 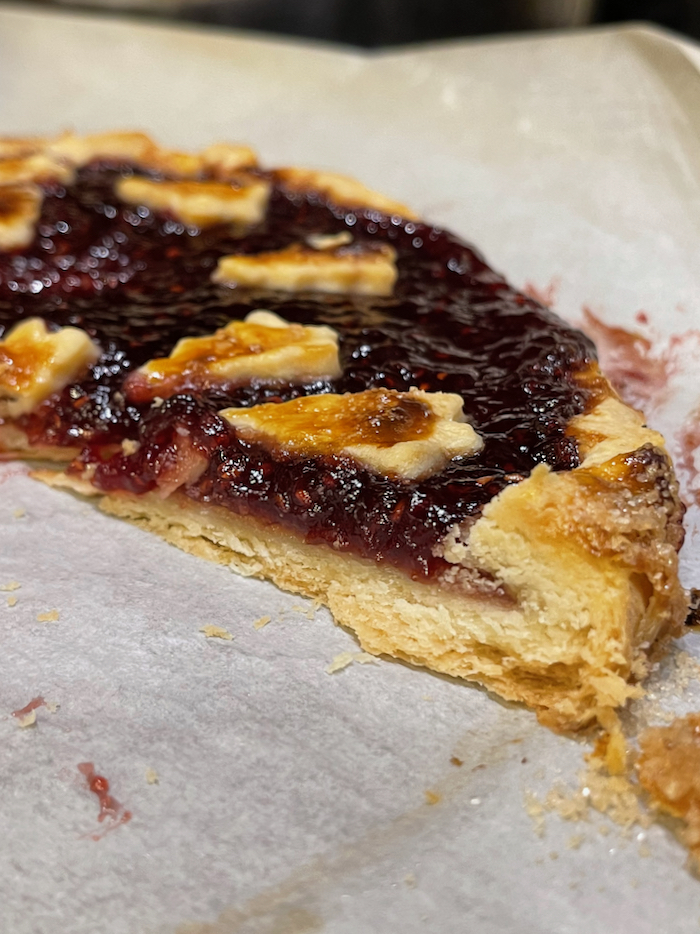 (Of course) I shared it to Instagram. It's such a simple dessert... another simple and gratifying dessert! We are two for two. I called it a "tart-pie-raspberry treat," but Kristina Gill calls it, "Crostata in Italy... gallette elsewhere!" Kristina Gill is a cookbook author living in Rome, so she would know! If I closed the dough over the filling, I would call that an empanada! What fascinates me is food and culture, food and regional specialties, and food that is universal, that coincides, in many places. Like how there are flat breads, unleavened breads, almost everywhere... naan, tortillas, pita lavash, chepati, frybread! Or fermented foods, like cortado and kimchi, pickles, and sauerkraut, giardiniera, to name a few. And the granita, too! I grew up with "raspados," and later learned about shave ice, in Hawaii, which I think comes from Japan, but I don't know, maybe Hawaiians climbed Maunakea and brought down snow and sweetened it! It's all so fascinating, so compelling, the stories of food, of trade and exchange, of distant, yet simultaneous development of recipes, processes. I am vibrating... all of this, and even knowing that I am barely touching the surface of this, that there is so much more to learn, explore, taste, literally, figuratively, is very exciting. I feel so fortunate to be living in a time when the stories are more accessible than ever, when I have many opportunties to participate, and engage, learn, share.
Posted by Natalie, the Chickenblogger at Tuesday, February 16, 2021

Email ThisBlogThis!Share to TwitterShare to FacebookShare to Pinterest
Labels: Ate It, Chicas, Cocina

Reading your posts and seeing your food photos, I do wish I was more of a kitchen dabbler and experimenter. I enjoy it once I do it usually, but I'm always stopped by the idea of mess and dishes. I feel lazy... like it is too much effort... I get this is an impoverished mindset and, unfortunately, I rarely overcome it. Sigh. I do thoroughly enjoy living vicariously through you and your kitchen adventures though. <3 :)

Oh, gosh, Janece! I wrote an entire blog post response to this comment, not to mention publicly outing myself for what my dabbling and experimenting leads to! (Add laughing emoticons here.) I don't know if I should wish to be a more orderly, responsible human being, or to wish that I could stop fretting about who I am and how I do things. But you always make me feel like a better, more capable person than I feel, and that's one of your amazing gifts. Thank you, friend. You have been so generous with me.

Thank you, thank you for your IG stories and your blog post response (which I just read and will be going back to shortly). A favorite moment from within these public self-outings:

"...but often as not, it makes me laugh, and feel perfectly imperfectly human, and creative."

Thank you for sharing yourself. This is good life medicine mojo!!!