The neighbor's remodel has begun. Actually they started about two weeks ago, but the audible part began this morning at about 7:15. Concrete around the entire perimeter of the ranch style house is being attacked with a jackhammer. I may go over there and encourage them, so that hopefully they complete the jackhammering today. I can handle hammers and nails, an infrequent circular saw, but the jackhammer is loud and emotionally jarring, like a ten hour dentist nightmare that I can't wake from.

"The undead have all the advantages."

a. True/False question on the U.S. citizenship exam.
b. Tom Cruise in an interview with Matt Lauer.
c. Suggestion for a new Disney animated musical movie.
d. My children conversing happily in the back of our mini-van.


We made it to the Summer Pops concert last week. My bad: I should not have assumed it would be at the same place we went 4 years ago. I was off target by at least 3 miles, and we ended up grabbing a ride from the bicycle-cabs, which was fun. The concert, at the Embarcadero, had a 4th of July theme and finished with a beautiful fire works display. Okay, the music was good and it was nice being out by the Harbor, among fellow citizens, soaking up culture, but Geoff and I were confronted with subjects we don't readily embrace: Baseball and opera. They performed "Casey at Bat" or something like that. It was the marriage of two forms of entertainment that I have yet to develop an appreciation for. I like some opera. I don't mind playing baseball. But when you have an entire chorus of people singing about strike outs and pitchers with the melodramatic fervor typically reserved for adultery, unrequited love, or consumption... it was weird, and nearly boring. And most confusing: Casey, the protagonist, the one they keep cheering for and building up... he strikes out! So it's bad opera, boring baseball and a sad ending.

Later in the season the Pops will be doing a Bugs Bunny tribute. Excellent. Bugs Bunny and The Ride of the Valkyries! Now that's entertainment. 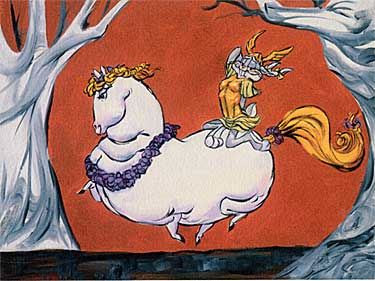 Posted by Natalie, the Chickenblogger at Thursday, July 07, 2005

My parents are going tomorrow night to Bugs Bunny on Broadway at the Seattle Symphony. I sent them last year for my Dad's birthday. They loved it so much that, this year, they are taking themselves. :)

The Pops tribute sounds like a lot of fun!