All I Want For Christmas 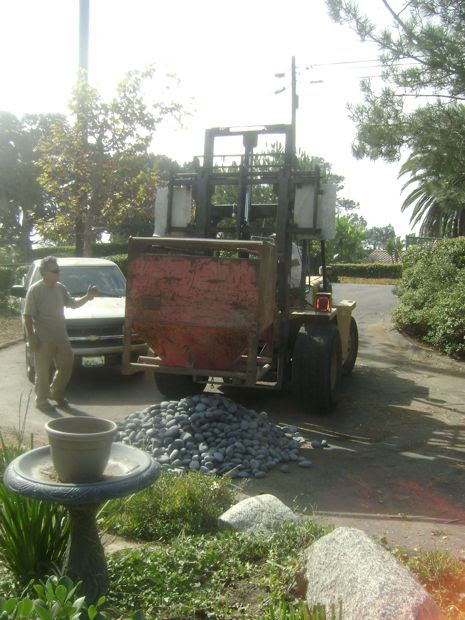 Oh man. Maybe I should be writing about my camera. My camera and the missing battery and charger. The battery and charger that I so carefully guarded and protected all month long, then lost. Lost! I am so sad and dejected. You should have seen the hot air balloon that nearly landed in our backyard. It was trying to rise, but over our yard it was still low enough for us to converse with the occupants in the basket, to look up into the balloon. Amazing. And us with Dorothy running around the yard too. I would show you how spectacular it was, but I could not find my camera battery! There are no pictures. This just slays me. (Shakes fist in helpless frustration.)

Wait.
What was my point?
Oh yeah.

I am using the tiny camera. The camera that we have become so unappreciative of that we let Maria use it. The camera that is pretty good, but would probably be even better if it had occurred to me that the lens is covered in several layers of Maria fingerprints.

Wait.
What was my point?
Oh yeah: These pictures are pretty lousy. Sorry about that.

I can almost pretend that it was an overcast afternoon, with a light marine layer and fog rolling in from the west. I could lie and say that I was trying a new lens-filter-setting for artistic effect. Dirty camera. Dirty camera and I probably never even bothered to check the settings. It was probably set for photographing butterflies in bright light or something... I'll have to check with Maria. 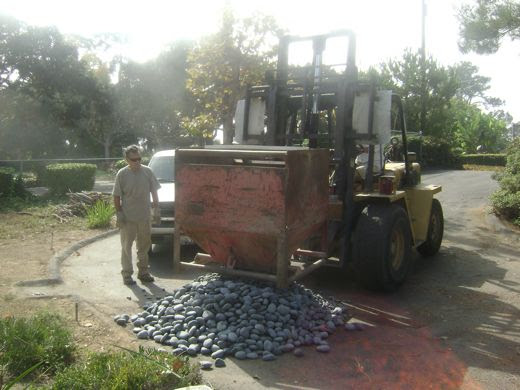 All I want for Christmas is a new battery and charger rocks. Beach cobble. Chocolate flagstone, granite stones. Big ones and fist-sized ones, flat ones, roly ones. When these beach cobbles were dropped off, Maria and I sat on the sidewalk and watched the funnel bucket open up and deliver. What a noise! What fun! What possibilities! What began as a practical matter... solving drainage issues, so we don't flood the front side of the house, has evolved in to a creative, constructive and dirty dream come true.

Yesterday, in the late afternoon, Smiley and I were deciding on spots to lay flagstone. Maria and I were handpicking larger stones to place in the garden bed outside the kitchen window. We carried rocks from the driveway through the gate and set them in the freshly graded bed. I could carry about four at a time and Maria would pick up no more than two at a time, and every time she found the ones she would carry she would exclaim with fresh interest: "This is my favorite one! Look at this beauty, mommy. It's my favorite."

Max joined us after a bit. His approach was pensive and deliberate. He carried two stones only and placed them methodically in a pleasing, thoughtful pattern.

The new bed will keep the soil from staying muddy next to the house and we can fill in the spaces with shade loving and low water-needing plants. The flagstone is giving us more access to and from the house. The rocks look pretty and the thyme that will fill the spaces between will look pretty too.

It occurred to me that if we did not want rocks, if we were pulling them out of the earth and trying to be rid of them, then it would seem like we had far too many. But we very quickly went through our supply of wanted rocks, and now I am itching to get some more. Yes, "itching." I think our afternoon in the dirt, playing with rocks, was the happiest yet, since we have moved in to the Bird House. I'm not sure even a good camera could have captured the satisfaction and pleasure I took in our labors.
Posted by Natalie, the Chickenblogger at Thursday, November 05, 2009

It sounds like you're happily nesting in the Bird House. Nesting with rocks...You made it sound surprisingly fun!

Hi Natalie:
Have been enjoying chickenvisits since coming back home from SD. I wrote you an e-mail a while ago but never heard back, owing maybe to the evil bug that befell you all???... (But check it out, okay?) Had a wonderful time just hanging at the blue house... Luv, "Aunt Joan"

hehe I *completely* understand your excitement over such lovely rocks! I have had the same feelings over dirt : ) Have fun!

This is so exciting, Natalie, to see your dream take shape, one stone at a time (smeary lenses notwithstanding).

Fellow rock collector here... though I have collected them one at a time on faraway beaches. (I wish to be closer to beaches one day.)

Sounds like happy nesting still at the new Bird House... and LOVE all those rocks! I just love rocks, if you have extra, I'll take 'em! ;o) Ooo...so sorry about the camera situation...hope all will be resolved soon. Happy Weekend to you all ((HUGS))

So it would figure, of course, that here in New England (and in MA specifically), we DO have the kind of soil in which rocks grow. Every year, we harvest bins and bins and bins of rocks and dump them back behind our shed. We are, though, currently reclaiming some to fill in an area near the driveway because while want we want are the beautiful kind of river rocks you have, I can't let these home-harvested rocks go to waste. (I admit it: after our first several years of gardening here, I was exasperated about how the bed that I'd made rock-free the year before was now full of them again. Took me a while to figure out that they'll just keep working their way up to the surface with the freezing and thawing of the ground. Guess I prefer to think that they just keep growing there....)

Looking forward to seeing photos of your rock projects and you know you most certainly will find that battery and charger.

Rocks are amazing. I COPLETLEY understand the fun you had sorting and putting them in "just" the right places. I have moved my Rock oollection from house to house in Ca. And then across the states to the midwest. I have rocks from every place & yard I have been in.So your not alone in your rock revery. What about Pine Cones, my biggest ones came from Big Bear Ca.
He he he, I still have them too.

You are just too, too funny! Yours are prettier than mine ... I too love rocks, but I have to settle for the ones that come to light after a freeze/thaw cycle, just like Jennifer.

Most of ours are about the size of a small house, and stay where they want to. Some are movable, and I have the yard by the street lined with boulders! (a neighbor has a tractor)

Find your camera and necessities and then we need some pictures of your project.

Interesting that you love the rocks! I have a whole bunch of them!

You DO have awesome rocks! Must have taken a huge rock tumbler and an even bigger garage to smooth out those babies!

I posted a selfie with Tasha, and she looks so cute, like the extra kind, and pretty, friend that glows in every picture, can keep a secret, listens, and will always take your side, before she gives you sound advice. "This is a no judgement space," she says, as she leans in to give a hug." Her heart is as flawless as her sweet face.
February 24, 2021
10:41 am
Lately, I have been listening to audio books, especially when I am sewing, and for 15 minutes to fall asleep. I love the timer! I started with The Secret Garden, then moved on to The Fellowship of the Ring. About half way through The Two Towers I needed a break from long poems and broad swords, so I switched to The Martian. The Martian is one of my favorite movies, and I am loving the book.
February 24, 2021
10:30 am
Today is Tasha Tudor Goat's 9th birthday. I'll probably write a proper post about this, filling in details, including archives, and photographs. For one thing, I have a gift for making much ado of little to nothing, for another thing, little to nothing else is going on, except for endless housework, which does not count. What I am wondering is... should I go back out to the garden and take up to date photos of the birthday goat, or will no one notice how old the pictures are, and my efforts to keep things fresh and accurate, true, researched, thoughtful, are almost pointless (and even likelier, only an excuse to neglect aforementioned housework)? (Also... question mark inside, or outside the paren?) I'll take new pictures. But first, toast.
February 21
10:00 am