All The Time, Chickens 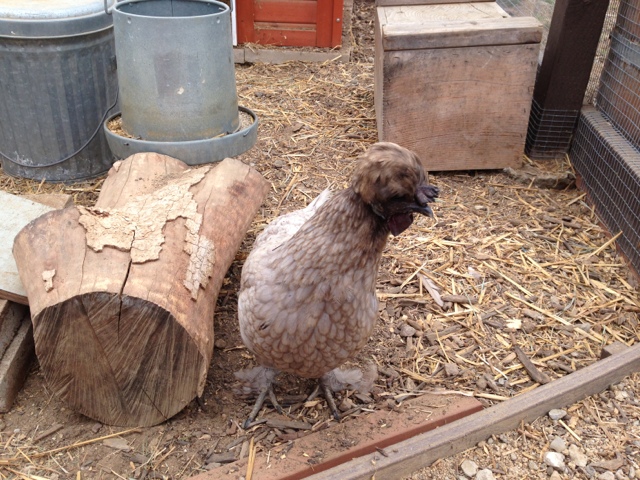 Shebot, our three year old Polish Silkie. She has the weirdest feet.  If you can possibly catch her, then you'll know she's soft, like a Silike.  But she's as wild and flighty as they come. 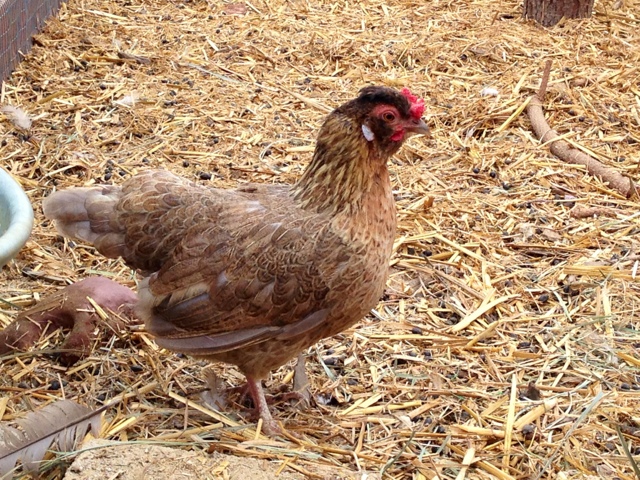 Penny is mild and wild. She is two years old.  The daughter of Zoltar the Bantam, and Zelda the Silkie Princess, she won't be caught, but she's sweet company. 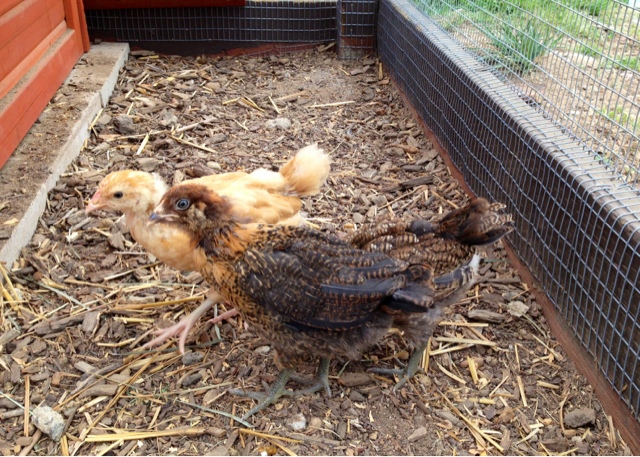 Hello, Juniors.  I think they'll be flighty, too.  They are only barely trusting of me.  Barely. Mostly they just move throughout their run, avoiding Kamen.  Pele is the darker Ameracauna.
About Kamen:  our Polish Silky, survivor of the bobcat attack, well she is no longer my little darling, nursed back from the edge.  She crows!  First thing in the morning we hear the earnest, but absurd rooster-like cockadoodling she tries to muster. Her other habit is to strut and stroll, like a rooster on patrol.  She chases her sisters, harasses the bunnies, intimidates the Juniors, and gives me stink eye from beneath her silly pompadour feather head!  Yesterday I admonished her bullying and even threatened her with the bucket.  Yep, I told her to settle down or she might become Kentucky Fried Kamen. 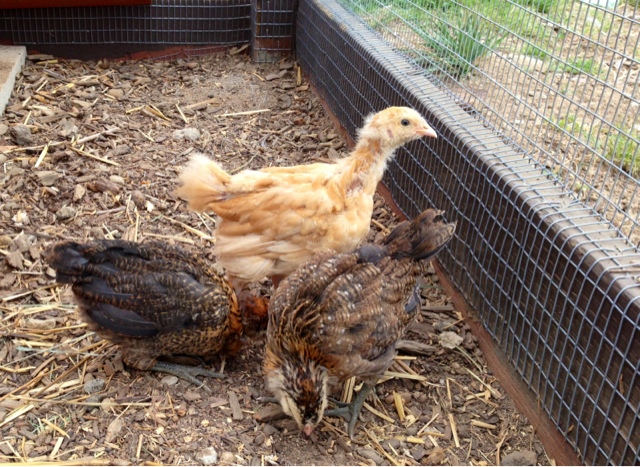 That's Lilikoi peering at us.  She's deep into her adolescence and gawky phase.  It'll all come together.  Soon she'll be a fluffed and golden Buff Orpington lady. 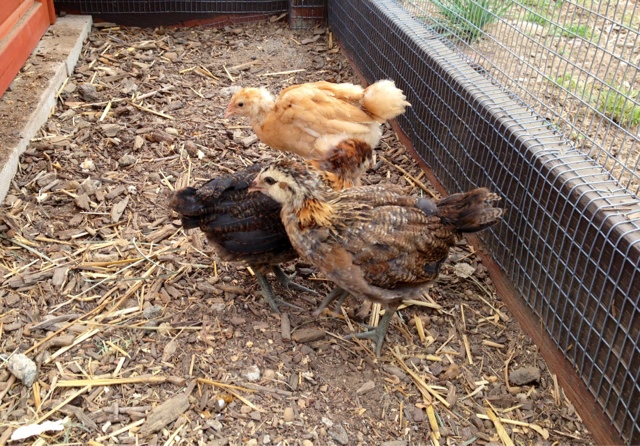 Now.  About Koa.  Well, we are noting some hints of what may be... Rooster signs.  Those tail feathers hold the first clue.  Rather than stand pertly with rounded or sort of cropped tips, Koa's tail feathers are tapering, and just barely tipping down.  Roosters' tail feathers come to a point, then cascade... Which is lovely, but we aren't likely to keep roosters, no matter how handsome. 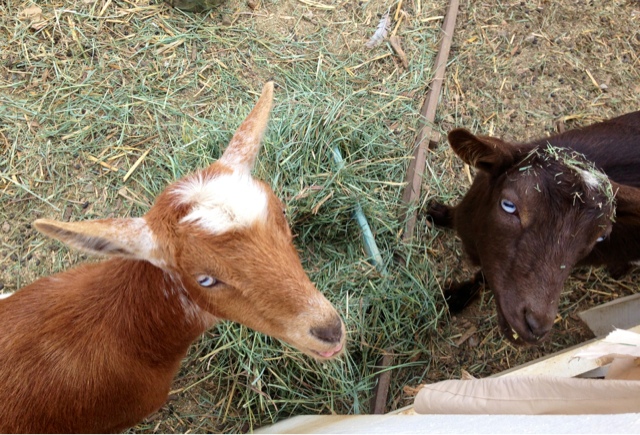 It's not all chickens, not all the time!  Remember these two?  Ada Lovelace Goat and Tasha Tudor Goat are as silly and dear as ever.  They don't fret, unless dinner is late.  They are happy with their chicken roommates and bunny buddies. We even had a little rain and so were able to test their shelter.  Goats are not keen on getting wet, and we hoped they'd have the sense to make use of their cottage.  Even though they never visit their shelter, for play or sleep, when the rain came down, they were in their dry and cozy home.  It was a funny sight, when they peered at us from their cottage, as though they were terribly concerned about us, out in the wet!
Posted by Natalie, the Chickenblogger at Monday, July 29, 2013

Interesting about Kamen. What was her personality before the attack?

I didn't know goats don't like to get wet...what do they do in the wild? I guess go under dense foliage and rocky ledges.

How many eggs do you wind up getting daily or weekly? Do you eat them all?
Always learning something here!

I love these updates... the only thing better is being around to witness things first hand. :)

Before the attack, she was a middle rung chicken. Not top, not the bottom. Live and let live. After the attack she became the family darling, doted on. She sat on our laps and watched Tele with us! lol
Then when we tried to reintroduce back into the flock, they took her for a zombie... a chica back from the dead. We wonder if her feisty, territorial attitude is because of the bobcat... she's determined to never be a victim again!

I shouldn't speak for all goats. I have read that goats do not like getting wet, and it's certainly been true for our two. Poor wild goats, if they feel the same!

Our eggs are down to zip-zero-zilch. I found one this month. No surprise. Our chicas are two and three years old, and their eggs are spent. At the peak, we got as many as 4 or 5 in a day, and at that point we would share them. Now we are looking forward to deep chocolate brown eggs from the Marans, and green or blue ones from the Ameracaunas. The Orpington will lay pale creamy cafe eggs... but this is months away!

I'm afraid I am abusing my iPhone blogging app. I've gotten better at it ( I think) and it's so convenient. The experts say not to post too often... burying your posts, but I never seem to hit on the right formula for success no matter what I do. New plan: Do what I like.

The new plan is an EXCELLENT plan!

I admire the way you take care of your animals. They are irresistible.

Everything... the world is doing its thing and we are holding on, taking notes, giving thanks, and trying to keep our wits about us. I still want to be a blogger, but I have not been the sort of blogger I would like to be, and I regret this. Fortunately, at least half of my excuses and reasons are good ones, like trying to learn French: I have a 62 day Duolingo streak. And packing for a Maker Faire, tackling health hiccups, and thank goodness they are, after all, only hiccups. Is it worse to say very little than nothing at all? We are fine. All fine. I hope you are fine, too... even better would be grand. À bientôt~ 27 juin, 2022