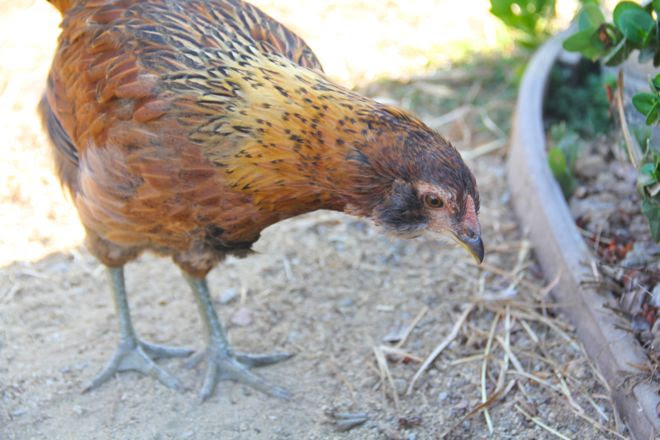 We have a flock of chickens. We call them chicas, because it's Spanish for girls. And I am bilingually punny like that. Within our flock we have chick cliques. Our three first generation hens are Kamen, Little Debbie, and Lucky Penny. They've been around a few years, and they live to bully the new chicas. The first batch of new chicas we call the Juniors, and the youngest batch are the Chiquitas.

The Old Guard gets prime seating on the roosts, and supreme command over every corner of the entire run. The Juniors who tower over the old guard have still not figured out they could sit on Little Penny and completely obscure her from daylight. The Juniors hang together, and run from the old guard. The Chiquitas, like their big sisters, move together like a single organism. Birds of a feather flock together. I kinda get that, now. 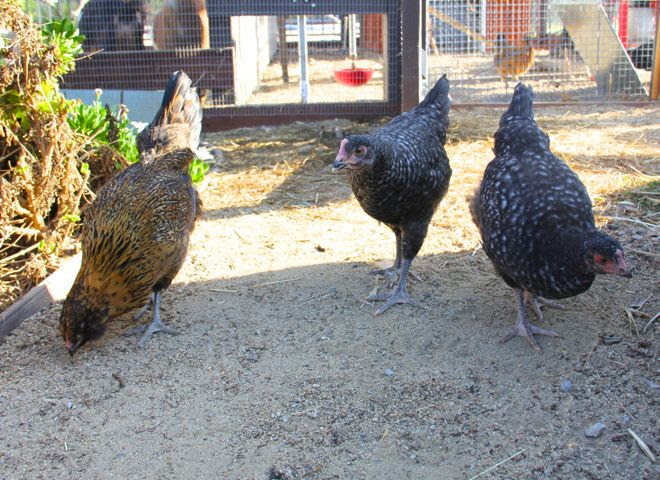 Yesterday, late afternoon, I let all of the chicas out for some pecking, scratching, foraging, and exploring. Neither the Juniors, nor the Chiquitas, have been out to free-range. We let them have outdoor time when they were small enough to corral and protect, but since they've gotten faster, they have lived entirely in the run. Until yesterday. I planned to work in the garden, and so it felt like a good time to give them some freedom. 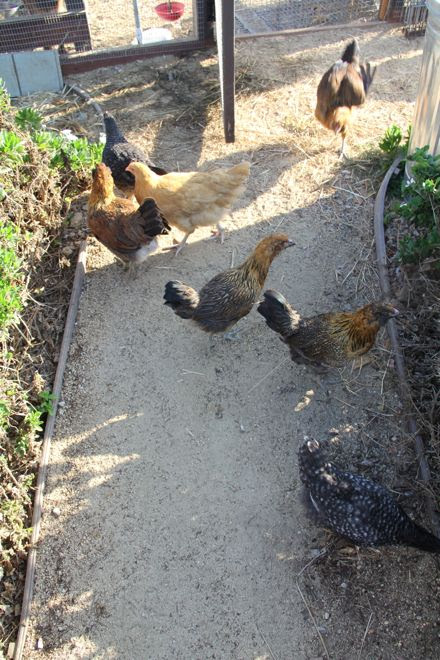 At first, they seemed ready and willing and they filed out eagerly. They started finding delectable things to sample, they dashed and flapped. But then they ran back in, as though they weren't too sure the wide open spaces were right for them. Then they popped out, again. They seemed to want to test things out. 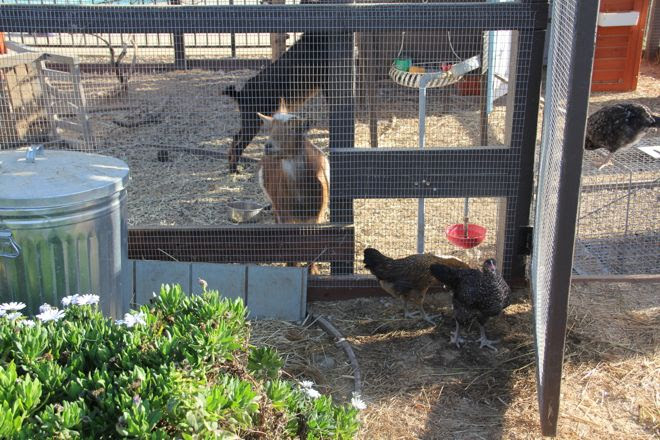 Since I don't want the bunnies free-ranging, I set a long cage in front of the entry. The hens hopped up, and out, but the bunnies stayed in, enjoying the quieter spaces, while the chicas were away. Ada and Tasha had to wait their turns. I wasn't quite prepared to manage free-range goats and chickens, while tending the garden beds. 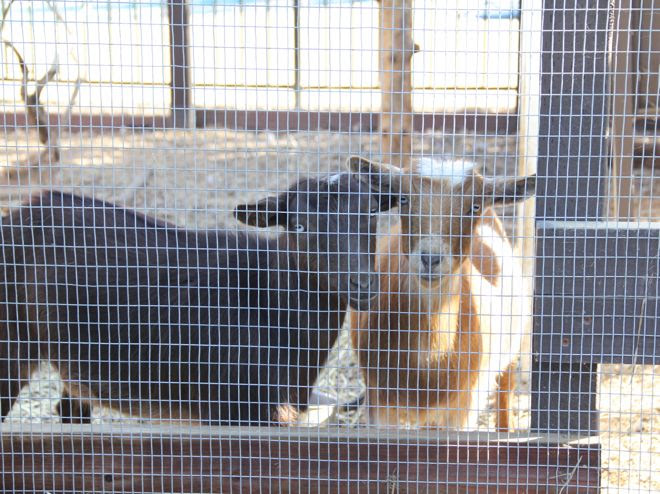 Tasha Tudor Goat and Ada Lovelace Goat, our darling girls. Our darling girls, who would love to bound out and snarf all the bunny food, inhale all the chicken feed, knock over feed bins, jump on tables, crash through the tomatoes and roses, and eat my apron strings. I love my goats. 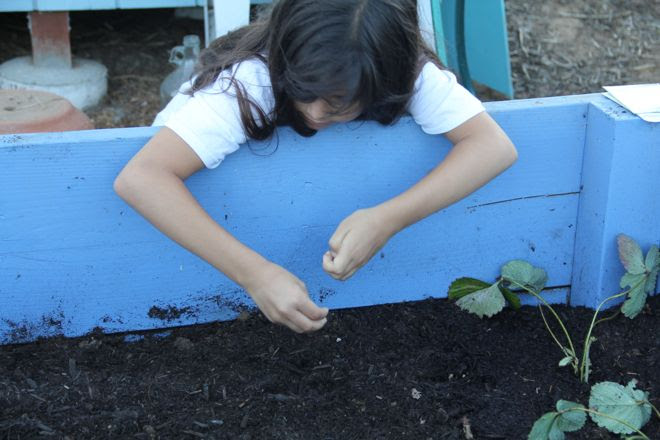 Now that our garden beds have been moved from the side yard, and between the run and the barn, we need to replant them. It's time for pulling out the last beets and carrots, tilling, adding soil, and dividing and transplanting our strawberries. Then we put in some seeds... spinach loves strawberries, and I love companion gardening. We planted more carrots, too. While turning the soil, I pulled out about thirty or a thousand grubs. I tossed them into a pot, and then brought them to the chickens. Well, the Old Guard was thrilled with their buffet, but the Juniors and Chiquitas were on to something else: Dust bathing! 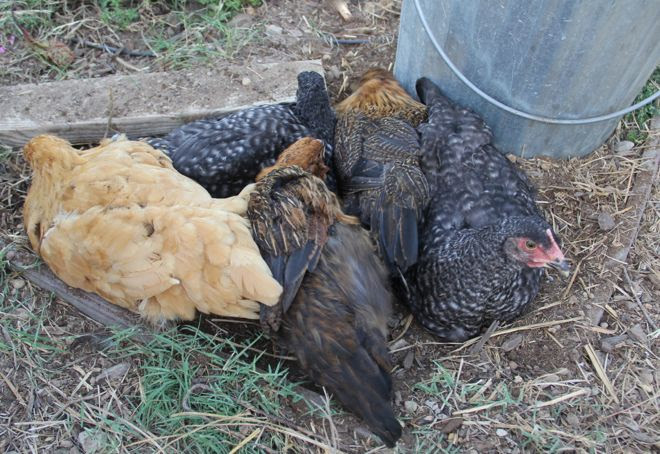 And seriously, they were really into it! And never mind the chick cliques. The girls were mixing it up! 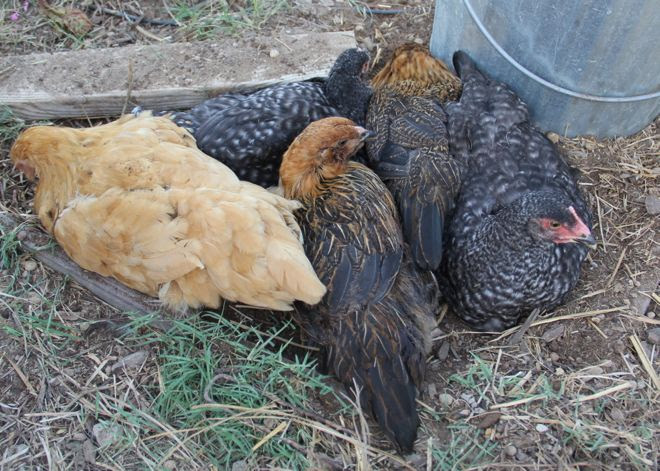 This was the spot. And it was hopping. 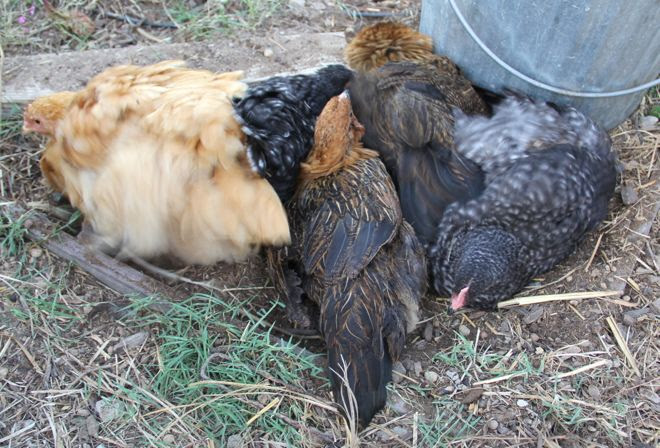 The first time I ever saw a chicken enjoying her dust bath, I was a bit freaked out. I thought my hen was dying, convulsing, having a seizure, in the ultimate rapture. They close an inner eyelid, so their eyes are glazed over. They writhe and flip, then lay limply, until overcome, they fly dirt and debris everywhere, and it starts all over again. It can go on for quite some time. 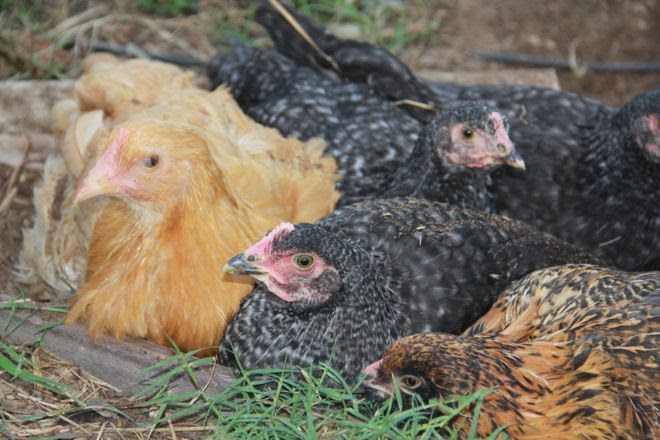 You only have to watch for a bit to realize they are, indeed, in ecstatic joy. Chicken delight, that's what a chicken's dust bath is. 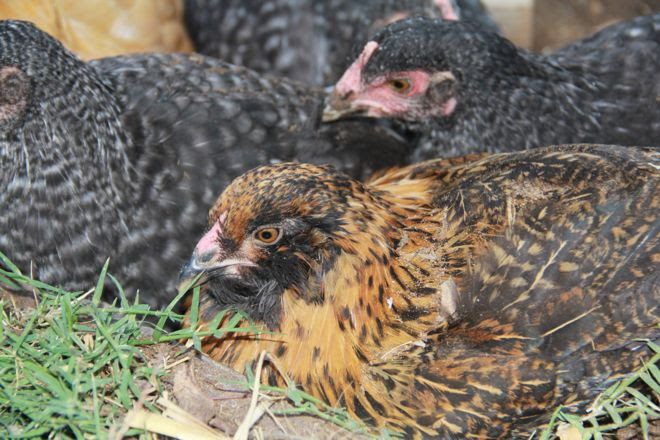 Sometimes the pile up was big, a hen would suddenly emerge from beneath, and we would laugh at her sudden appearance. Maria and I sat on the ground watching this for twenty or thirty minutes, because it is so funny, and happy. Their happiness is infectious. 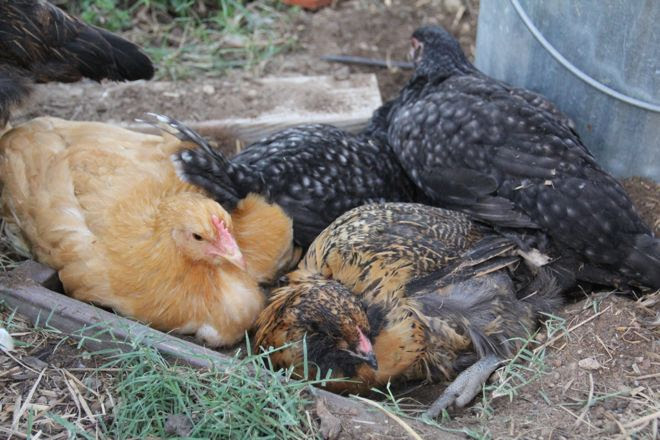 The dust bath gets sand and dirt into their feathers, onto their skin. It exfoliates their skin, loosens crud, and shakes out any parasites trying to hitch a free ride. The chicas are in there trying to cover every bit of themselves in dirt. They fan out their wings, and beat the ground to kick up dirt all over themselves. It's not easy to get photos of, but it's fun trying. 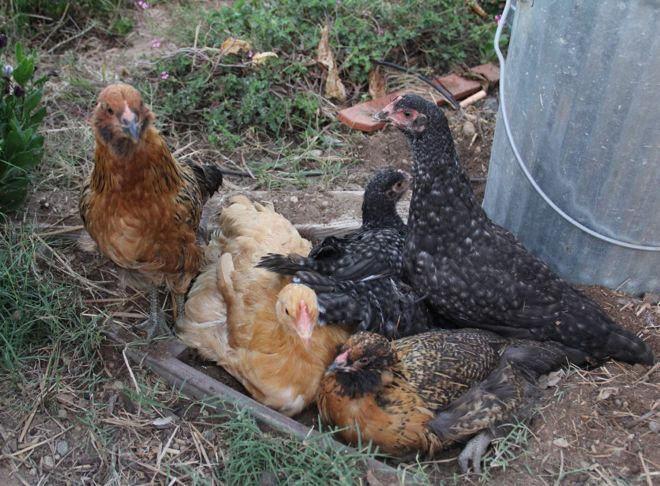 When they stand up, they look scruffy and their feathers are droopy, heavy, and less fluffed. That's because everything is coated and holding dirt and dust, and the next step really cracks me up: They walk away, and at some spot and time, they stand planted in place and shake like a wet dog! As though pulled out by centrifugal force, their feathers open up and out, and the dirt flies. It's a spray of dirt, radiating in every direction. The Old Guard will wait, carrying their payload around for quite sometime... often waiting to drop it on our porch. When I happen upon their deposit, I find a perfect dusting of dirt, in an area about the size of a medium pizza, with two chicken feet perfectly stenciled in the center. 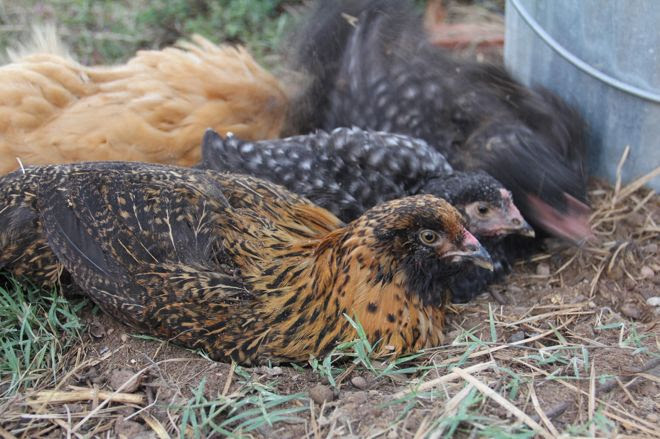 You can see the two who are loading up, a blur of dust bath euphoria. 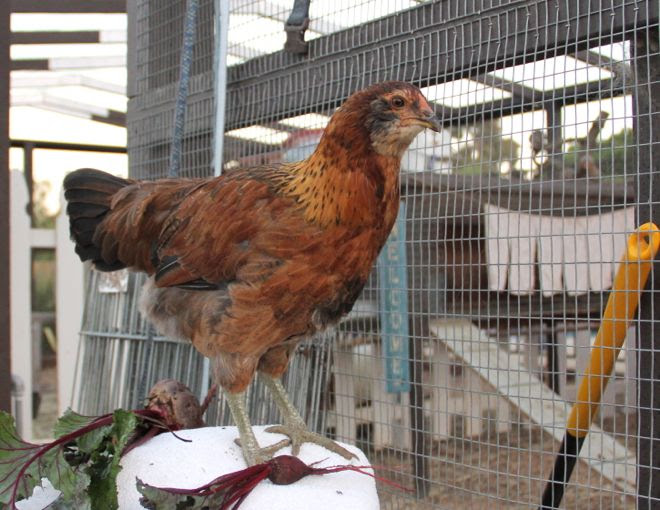 Koa, didn't join in the fun. Maybe she didn't think it was appropriate for me to hang around their spa, with my camera, laughing.
Posted by Natalie, the Chickenblogger at Monday, September 16, 2013

I love to read about your chiquitas...we have been talking about chickens for a long time and my daughter has a huge interest as well. We have decided that this year for Christmas, she is getting chicken related stuff and chicks in the spring...I am so excited! Anyhow, your chicks are just so fun to watch from afar!

I love when you give us "city slickers" all the "dirt" on your farm family. Entertaining and educational!