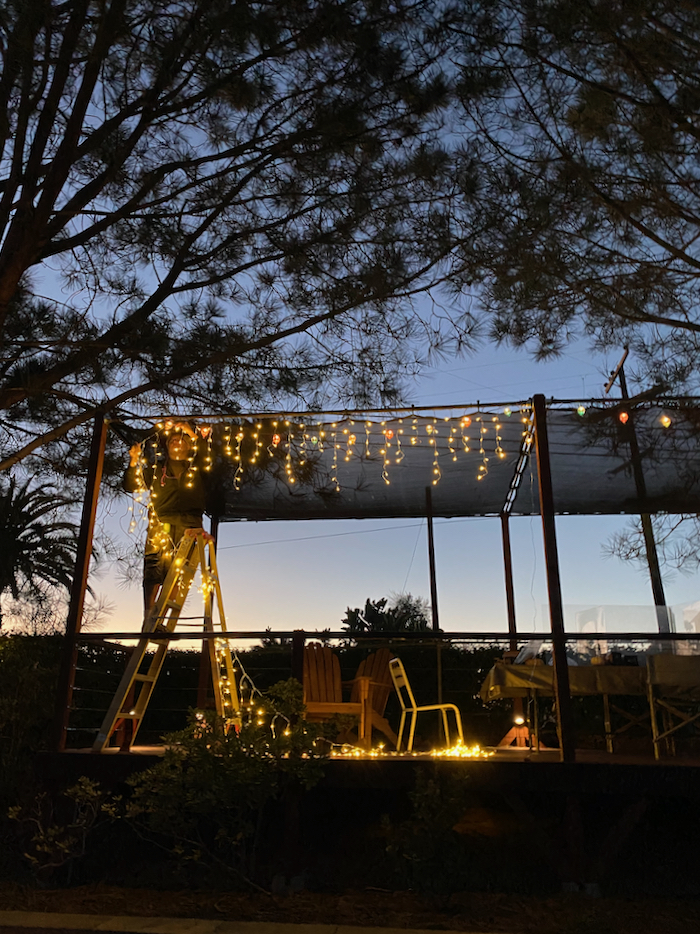 Sunday night we gathered. It was like seeing a break in the clouds and running out to catch some sunny rays, before we all have to crawl back into our respective caves and lean-tos. We had one last chance to sit far apart, around campfires, and share time in each other's company, and I am so glad we took it. Last week my whole system (heart, and head) took a pretty severe nose-dive, and there's no denying I was in the midst of a very heavy, dark, pity party. Nothing that lead to that break-down has changed, but the get-together and laughter helped, and the rest is a matter of being too dehydrated to cry much more, and having enough perspective to know that denial, withdrawing, and simply not thinking about it goes a long way to helping me get through this. Then, while I am busy making the effort to not think about setbacks and disappointments, my idealistic, holiday hungry soul seeks music, light, pinecones, fuffy kittens, and online purchases. Geoff is coping by hanging lights. I am coping by collecting fallen pine cones and stacking them on open surfaces throught the house. 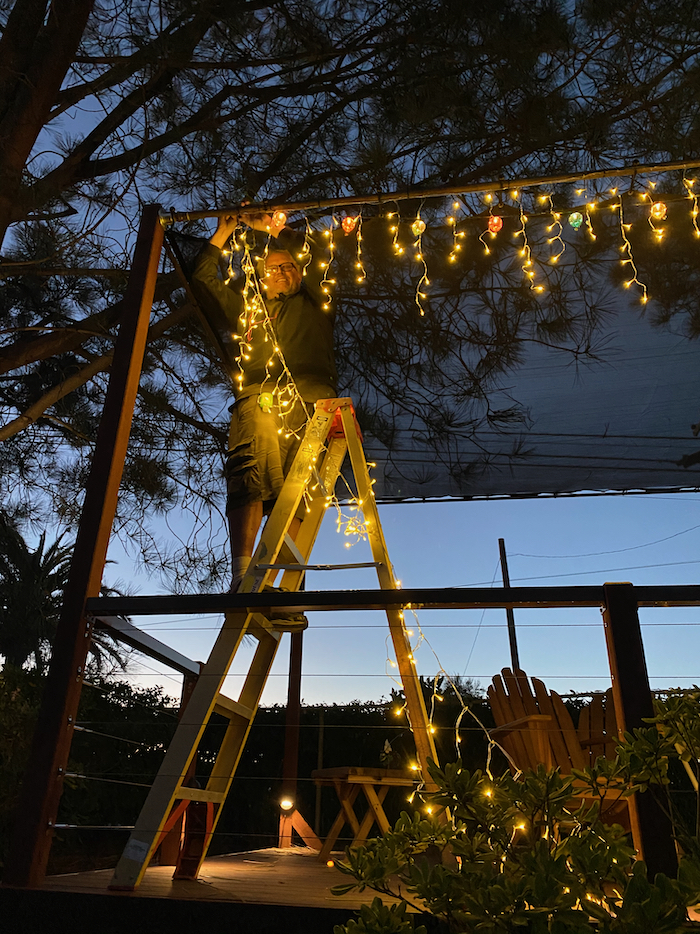 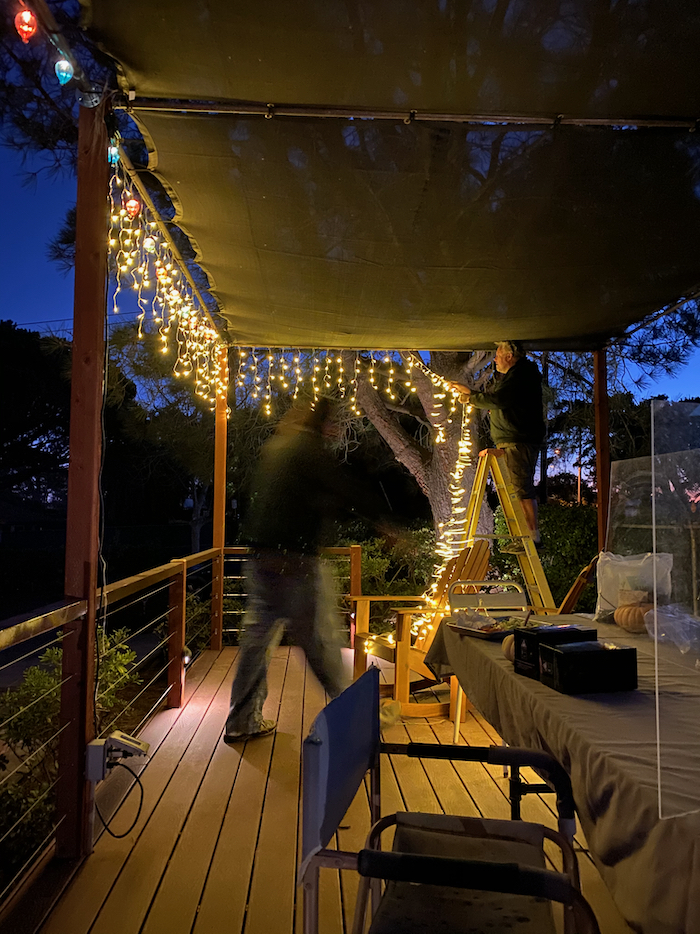 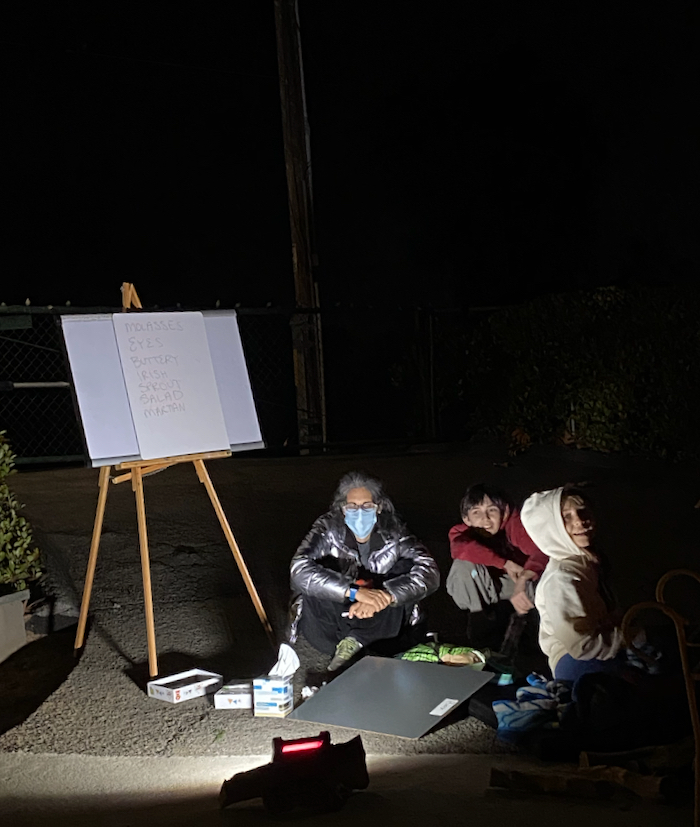 So, before the official start of the stricter lockdown, we did squeeze in another visit, and we enthusiastically asked Leslie to bring back that word game... what's it called? Just One! Leslie, you got us hooked! It's probably even easier to play in a house, with lighting, and everyone around one table, playing in close proximity. But Leslie has everything figured out, and she leads us with rounds of safe distanced play, using our phones, a spotlight, and easel, and loads of patience. It was fun, even though we went through a few rounds with some tough words to guess! William closed his eyes when Leslie showed the rest of us Just One word, and then each of us sent her one word to describe or associate with the word William would guess. Are you following? I don't follow games well, and it's always better to just play and learn as I go.
Do you want to try? If you saw the words: Molasses, Eyes, Buttery, Irish, Sprout, Salad, and Martian, what single word would you guess goes with all of those words? And I admit, this was a tough one, but William did come up with the right word. One more hint: the first and last clues are obscure, but excellent nonetheless. 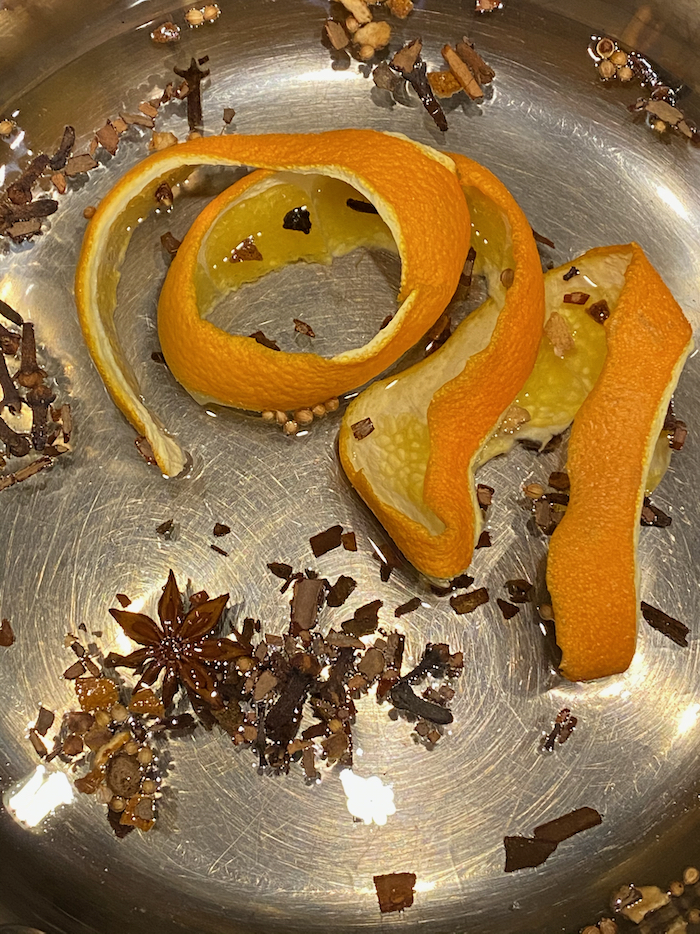 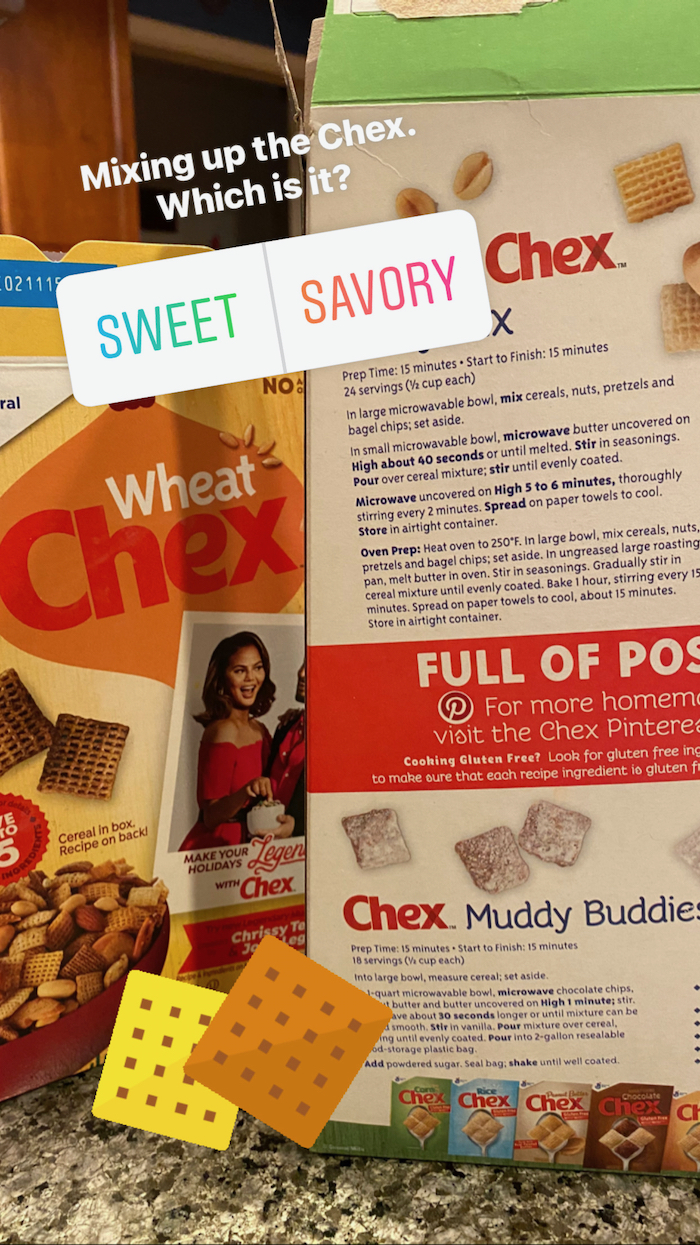 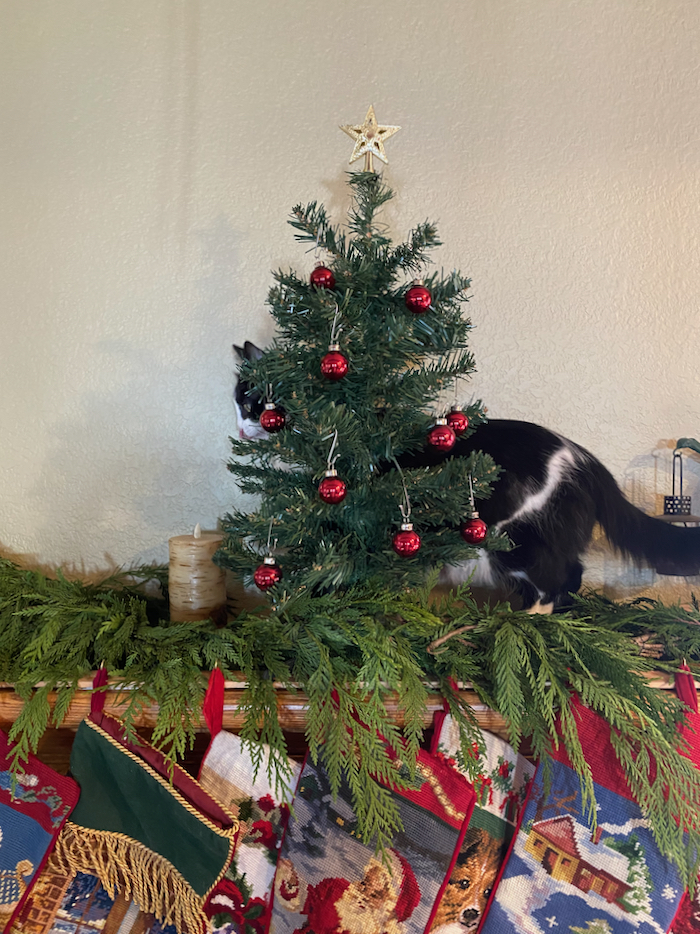 After our game, after a nice long chat with Janece, William and I wrapped potatoes and roasted those in the coals, and watched for the Geminids. I only saw one meteor, but I know the viewing is going to get better and better, and I am determined to camp out all night over the 13th, because they are supposed to peak at about 2 am, and the new moon should keep the sky nice and dark. I love following JPL on Instagram, especially at the beginning of each month, when they announce what to watch for... What's Up, December. I had hoped we could have another driveway gathering for this, and Solstice, and the Great Conjunction... oh, that's right... I already nerded out about this. But it's so cool, guys! Who's going to watch the sky with me, but not with me, but together in skywatching nerd spirit?
Other Things. I made Chex Mix. And I made a survey/poll about it on Instagram. Also nerdy, I guess. I even tried to make vegan Chex Mix, concocting a kind of worcestershire sauce, without fish. I think it came out pretty good, but then Alex let me know that cereal with added Vitamin D is not vegan. Ugh! Foiled. He nibbled on the nuts. I started simmering spices and orange peel on the stove, and it smells lovely. And! I decorated the mantle, again. And even though Cairo jumped up there and started chewing the tree, he only did it once, and so far everything is still up and safe. OH! And the stockings! Every year it's a mad to scramble to find them and rig some way of hanging them, and this usually happens about 9pm Christmas Eve. This year I feel triumphant. I vacuumed the attic, brought out the stockings, created a sturdy and functional hanging system, and we are rocking the stockings! 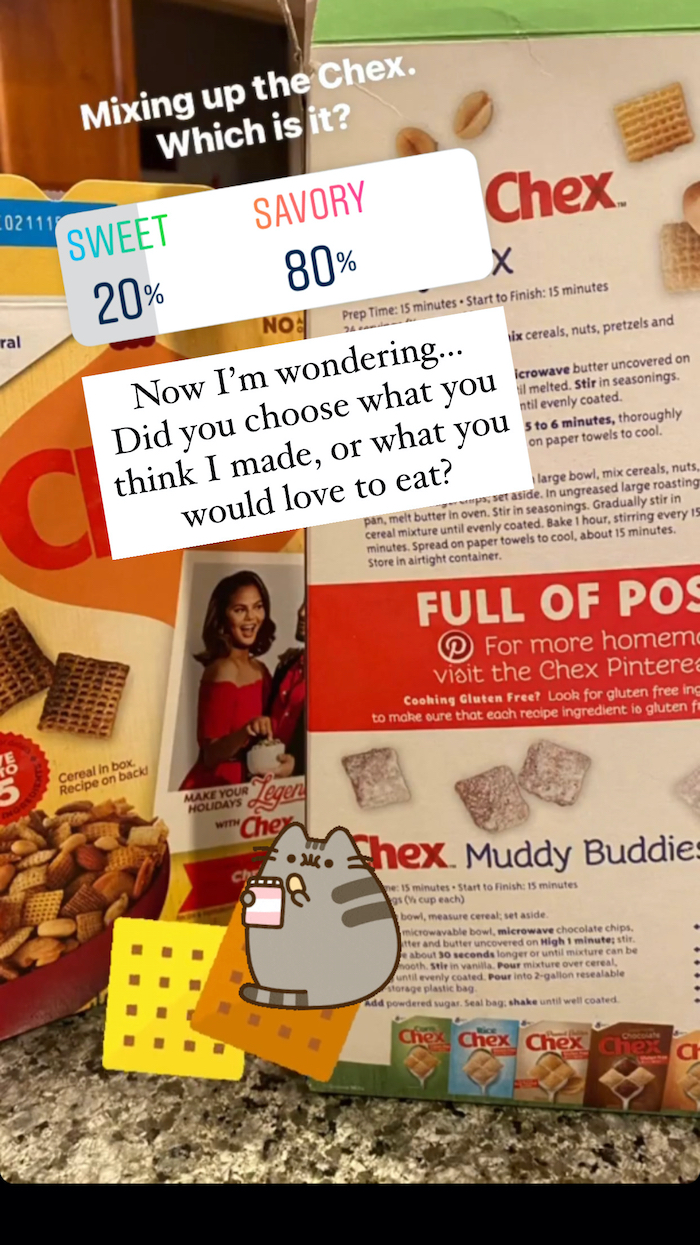 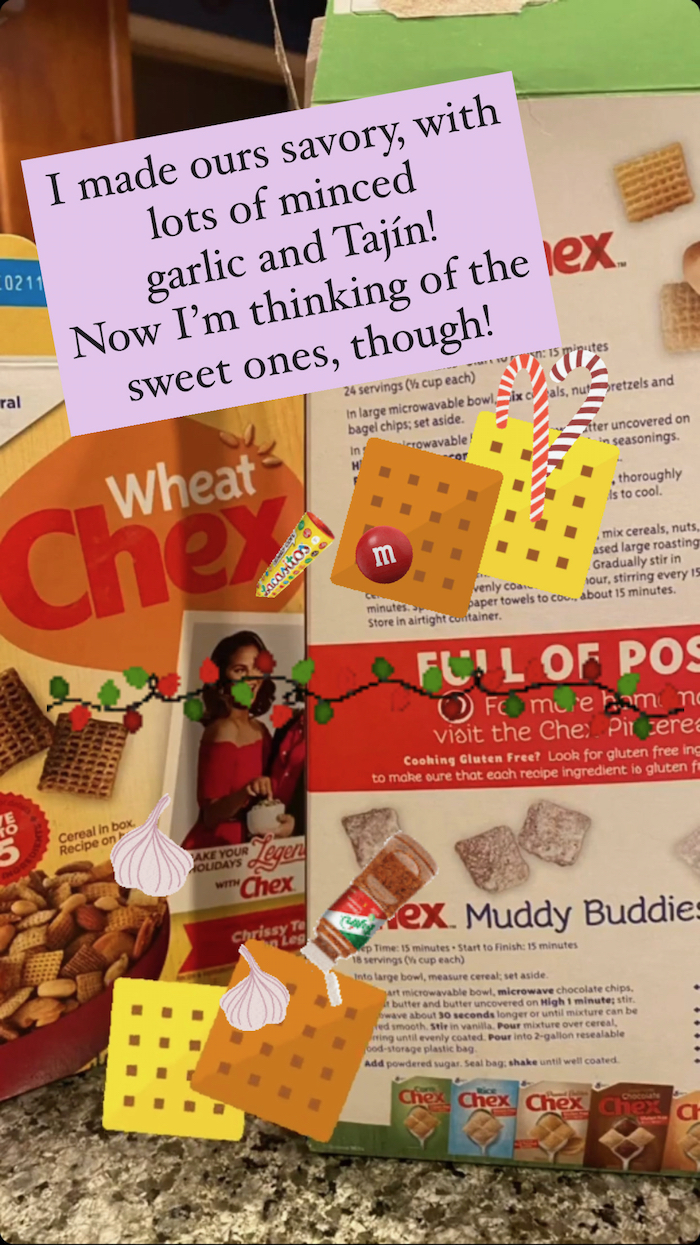 Maria and I are thinking of making sweet ones, now. And we sat together trying to recall everything we remember from that one time we ate sweet Chex Mix. There's a recipe on the box, but the one we had was different. Instead of peanut butter, it went more towards peppermint. We have a lot of testing to do. Wish us luck! 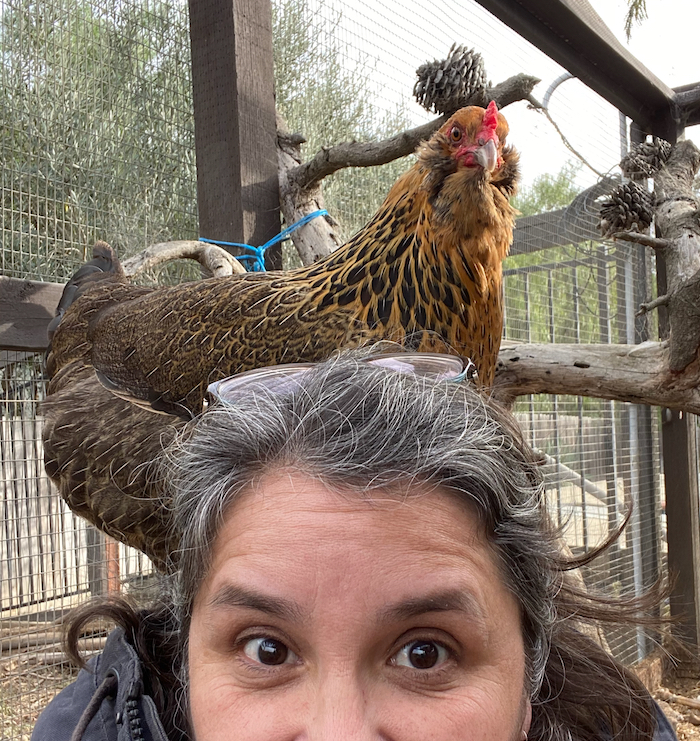 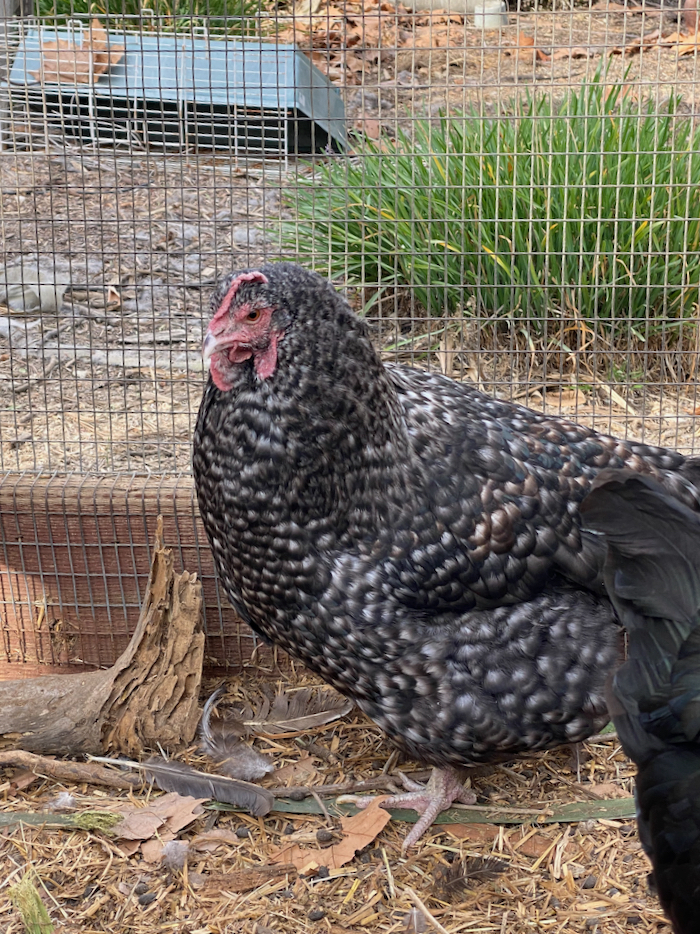 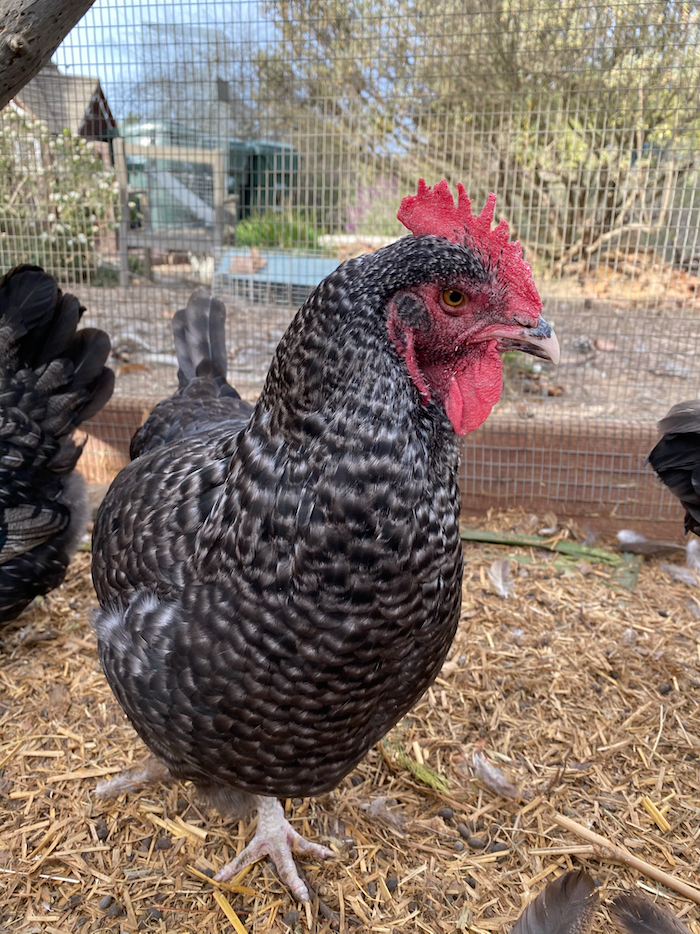 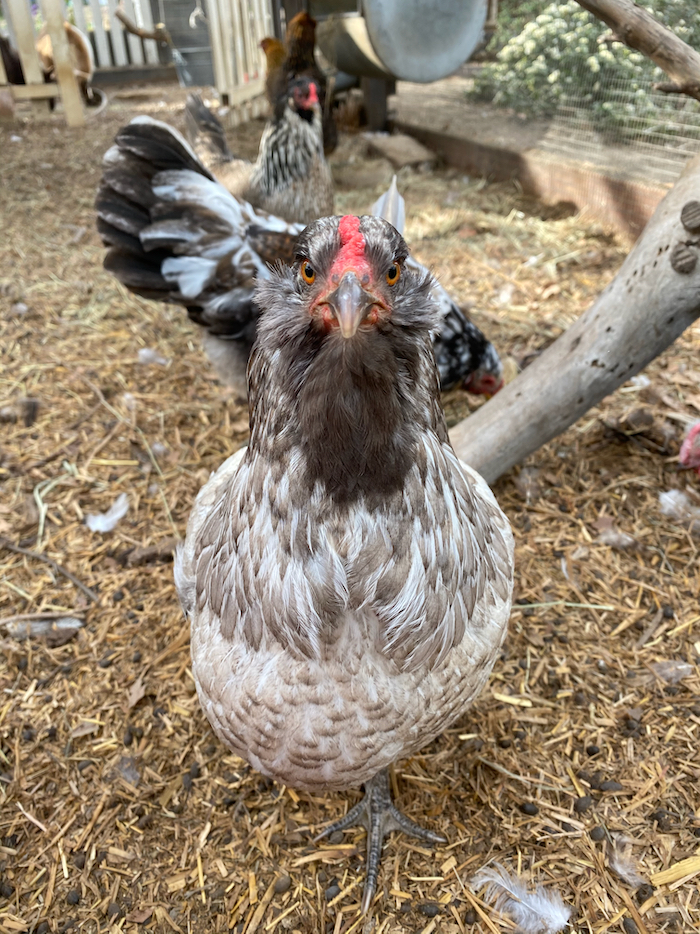 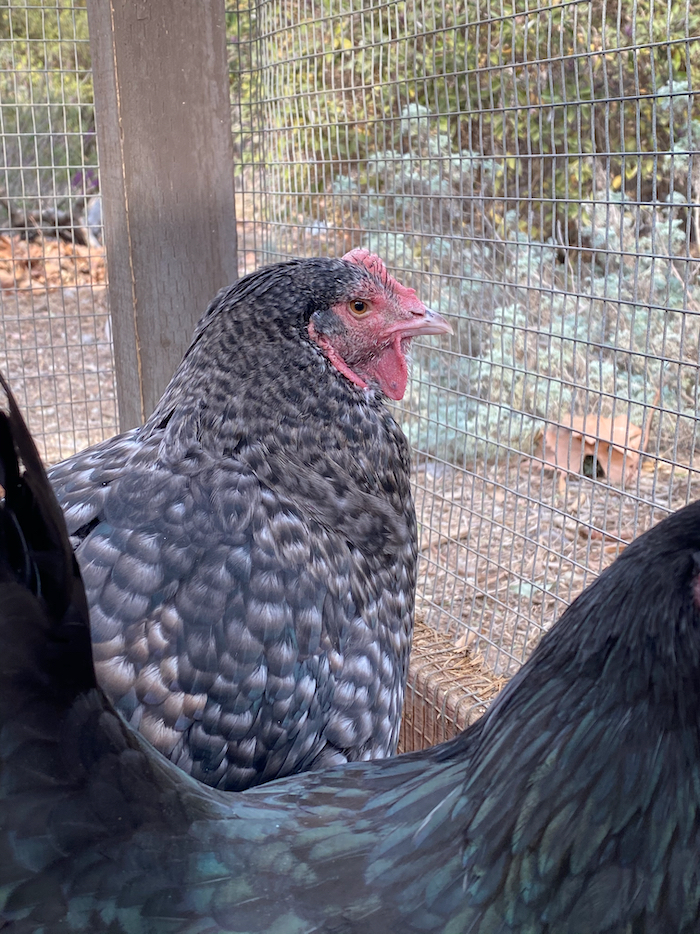 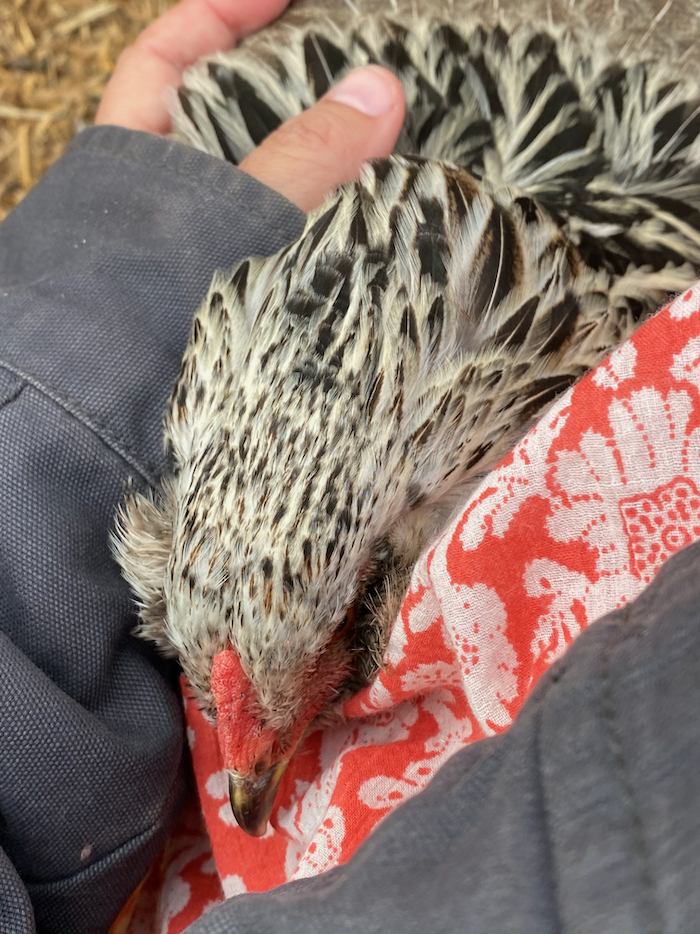 The chickens and goats are doing well. It seems like the three flocks mix and mingle more readily than they did in August, and that's nice. I am keeping an eye on Liberty. She's getting on in years, and there are signs this may be her last winter. I can't think about that. She has had a very happy life, and that's about as much as we can hope for. I will think of those good days, and there have been many. She's still roosting, and getting around. I hope she stays comfortable. 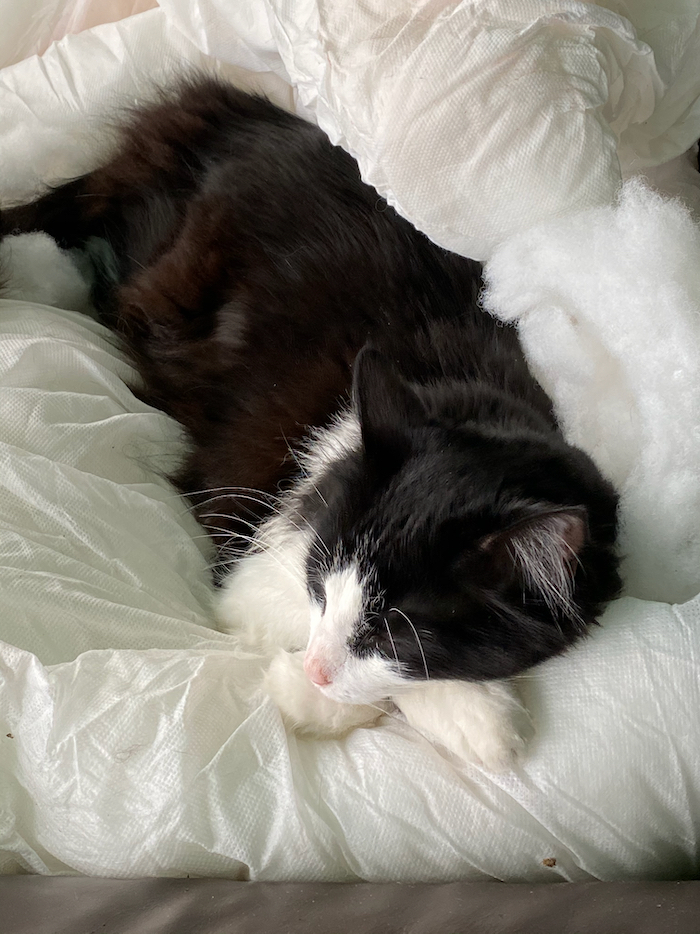 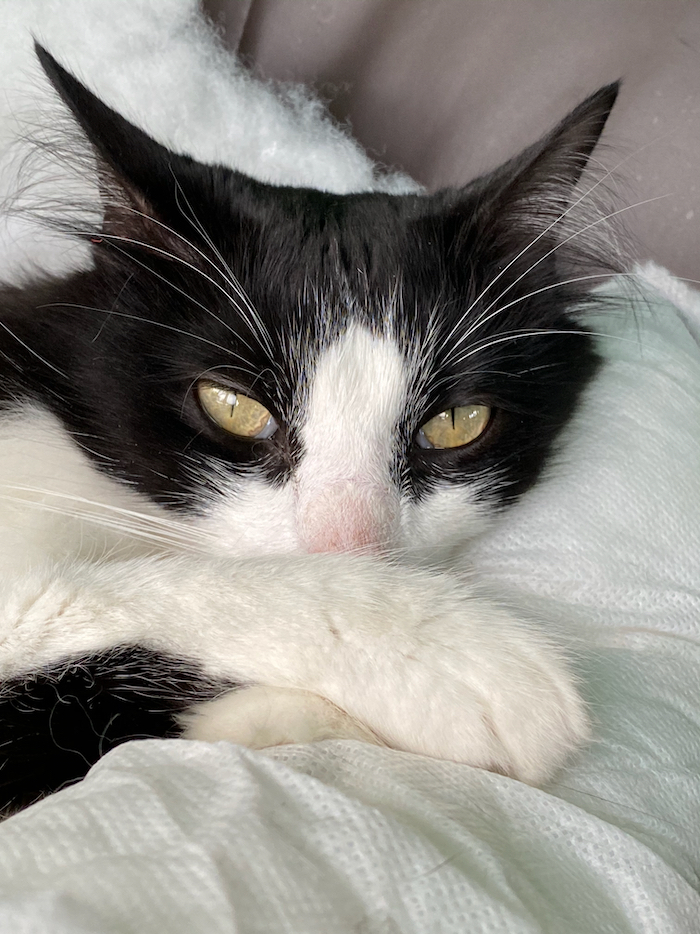 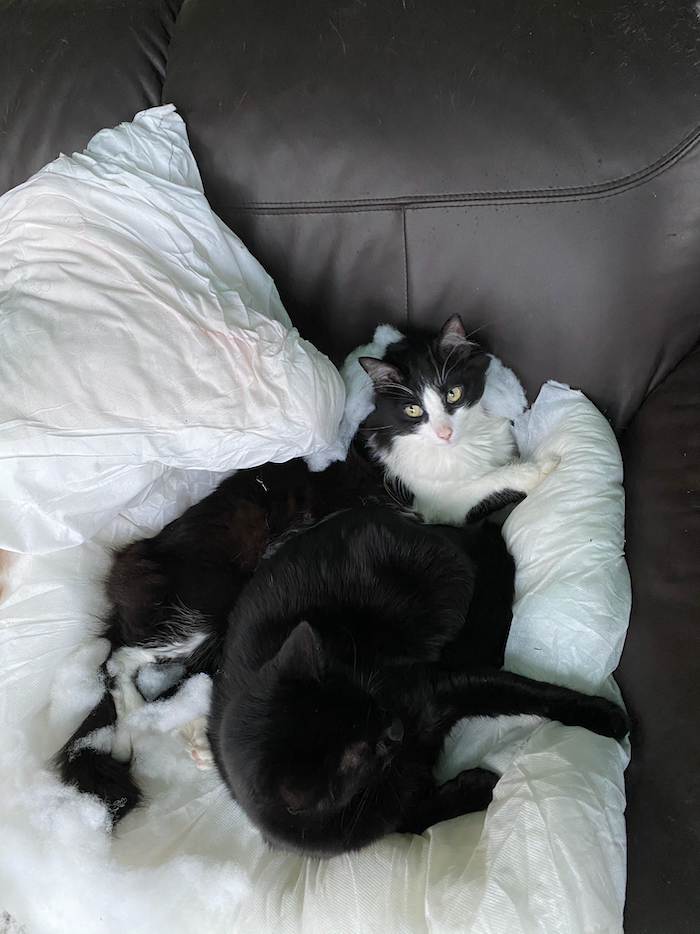 Does anyone else live in a home ruled by their pets? Asking for a friend. 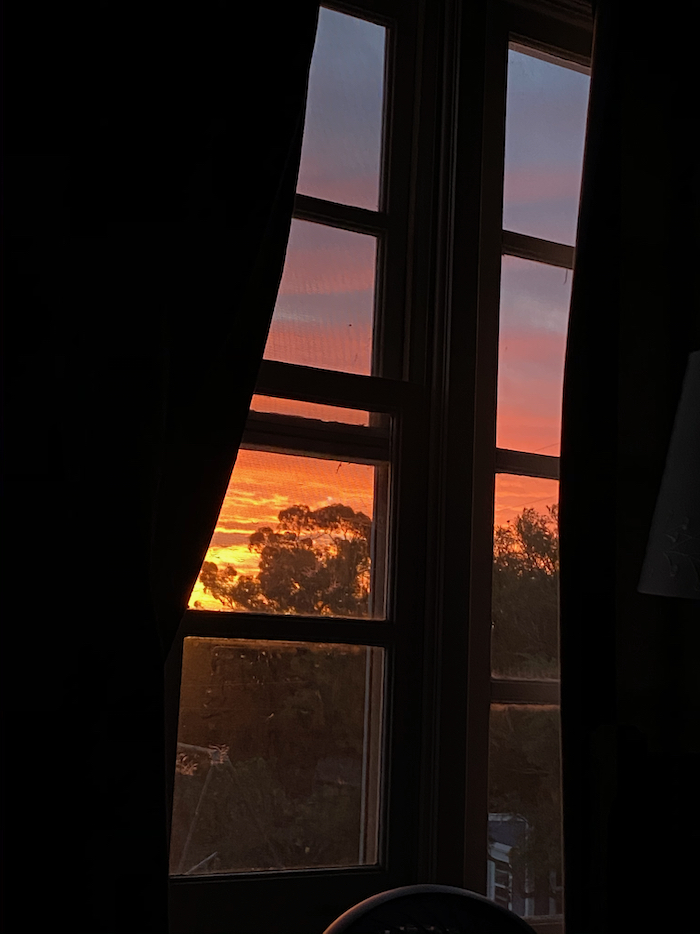 This was the view I woke up to. It made me spring to my feet to see it from the balcony. It was stunning. Before I saw this, though, Geoff and I heard the wind kick up. Oh, man. I really wish 2020 did not have to include Santa Ana winds. Seriously, it's too much, already. It's still howling. I could enjoy it, as weather, if it didn't put us on fire watch. Another thing... we have been waking up to mid-forties temperatures, but it was already 70 degrees fahrenheit at 6 am! Strange days. I won't think about that. Look at these colors and clouds. Even the hawks were up and riding the gusts, calling out. 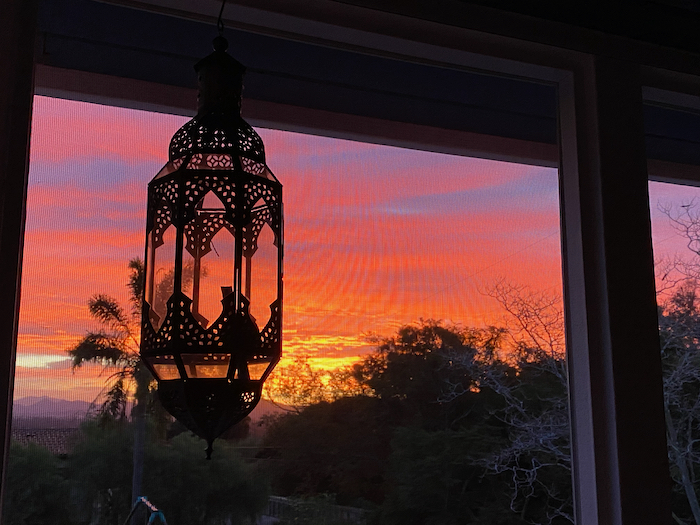 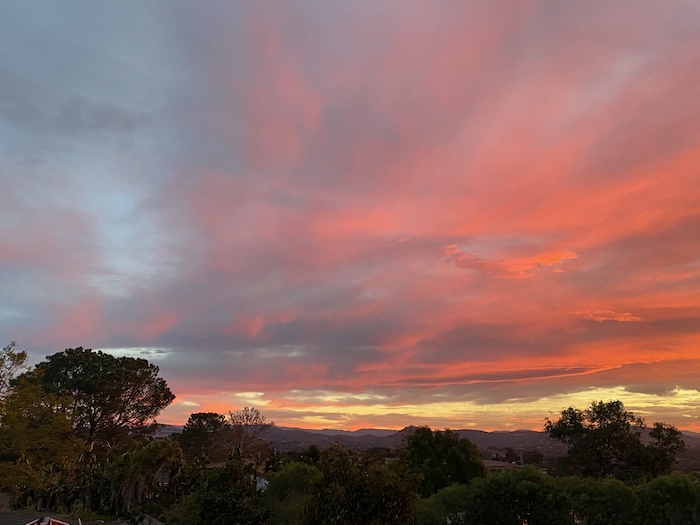 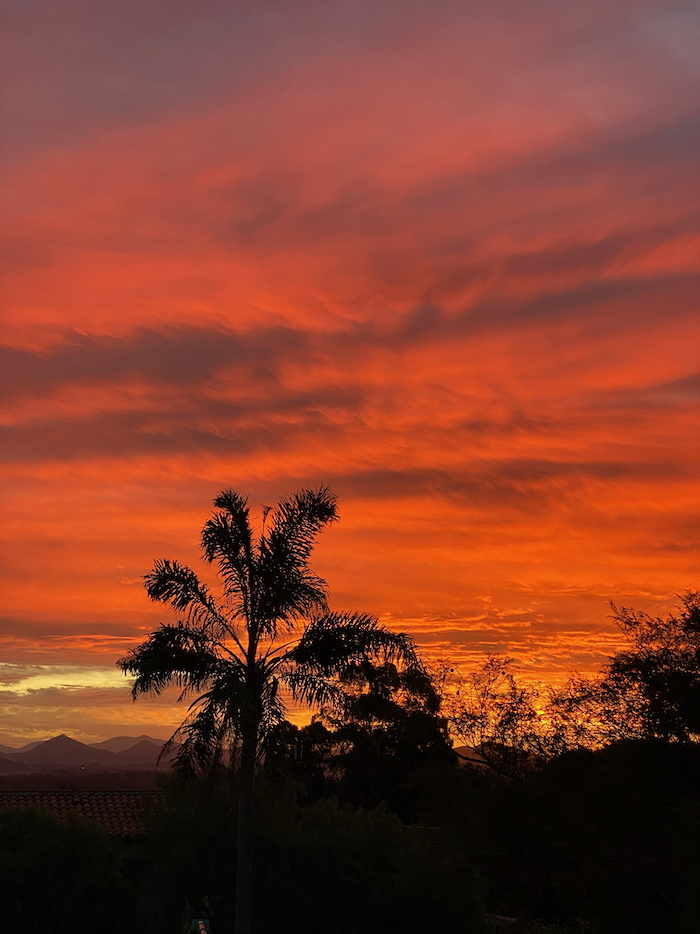 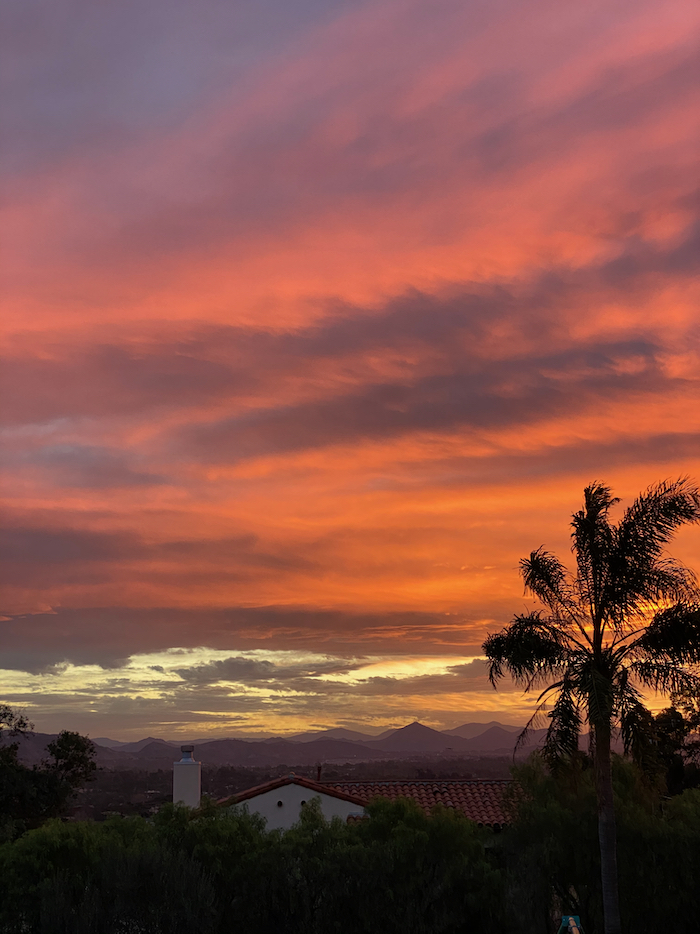 Posted by Natalie, the Chickenblogger at Tuesday, December 08, 2020

Your husband is making such a pretty lighted space outside. I also love watching the sky at night.. but not in the winter in Oregon! LOL! I enjoyed seeing your chickens. We have a flock of 8. They've stopped laying for the winter now. A bummer to have to buy store-bought eggs! ((hugs)), Teresa :-)

He really did make it awesome, Teresa! My first impression was that we were making a Santa station, where kids would line up to visit St Nick, and have their picture taken. And I am kind of disappointed we aren't doing that. Next year, or the first cold night after we get the ALL CLEAR, I am going to serve free hot chocolate from the lit up deck!
Even here, in Southern California, I have to bundle up to do my stargazing, but it's been so worthwhile. Wish me luck on my wild idea to stay out all night. I so badly want to see lots and lots of meteors.
Our hens have slowed down, so their few eggs are more precious than ever. I can never bring myself to put a lamp on. They deserve their rest, I think.
((hugs)) Teresa. Oh, and how many days left??