The Night of The Geminids 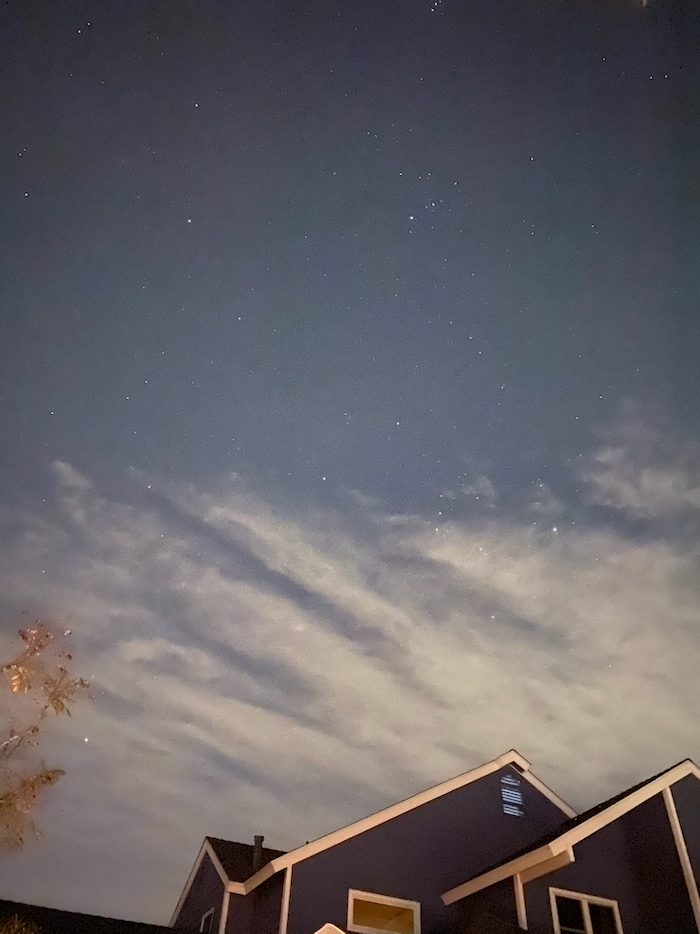 Above our house, last night, I watched the eastern sky, as Orion rose. The clouds moved, too, a thin blanket from off the ocean, that we call the marine layer. This was the sky we watched for the Geminids, the annual meteor shower from comet 3200 Phaethon. Early on we had the awesome pleasure of sighting earthgrazers... slow moving and longer lasting meteors that travel horizontally across the sky. 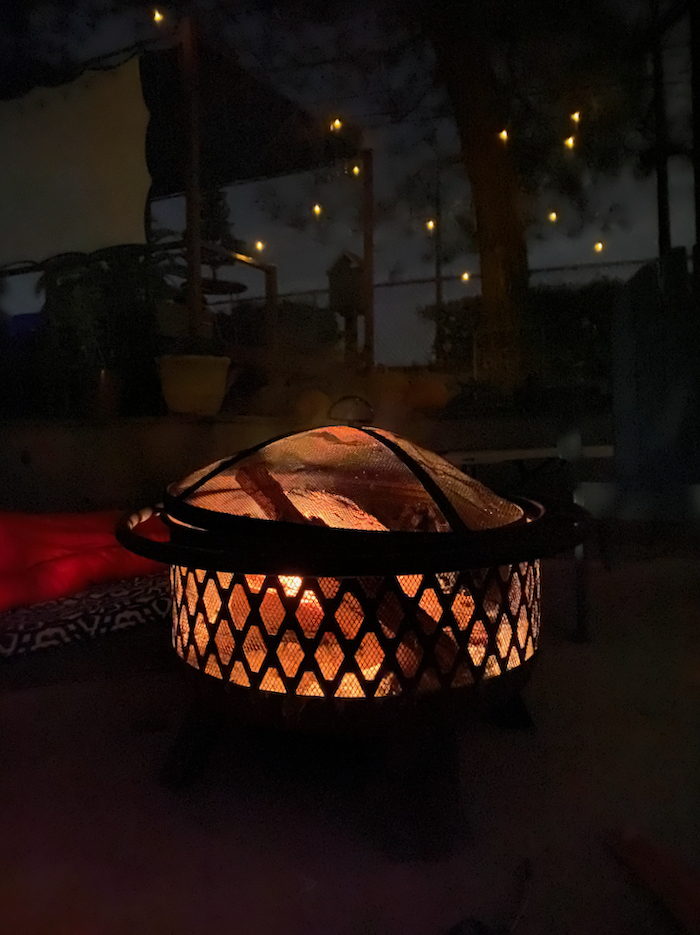 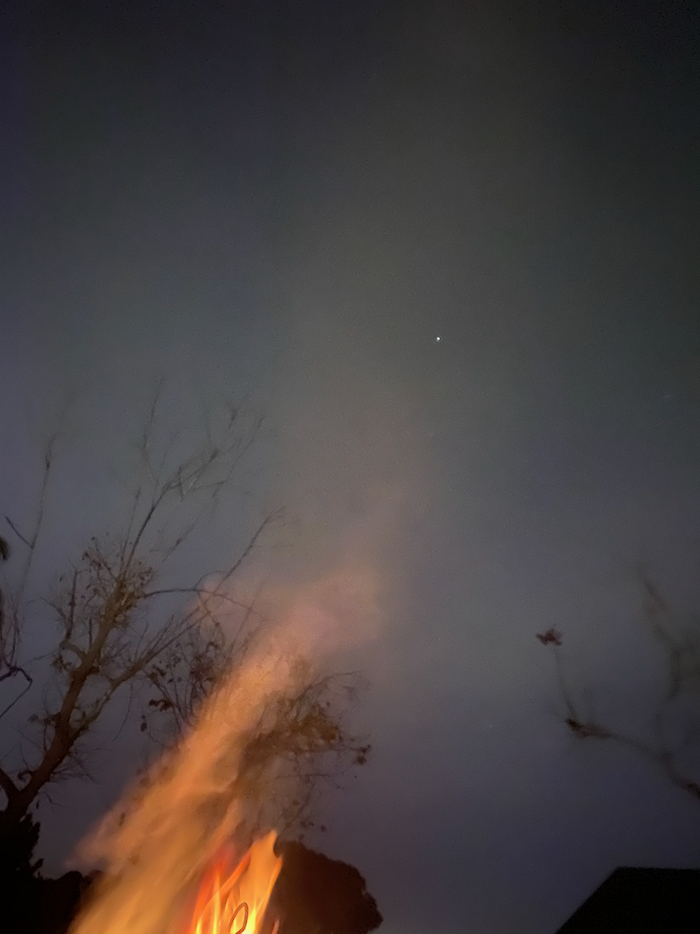 Using my phone app, I passed time identifying constellations, like Capella... which is a cluster of 4 stars. I love the app, but I still have so much to learn, so it's helpful to cross reference things I was trying to figure out last night. The Internet is amazing! Those four stars are over 40 light years away! 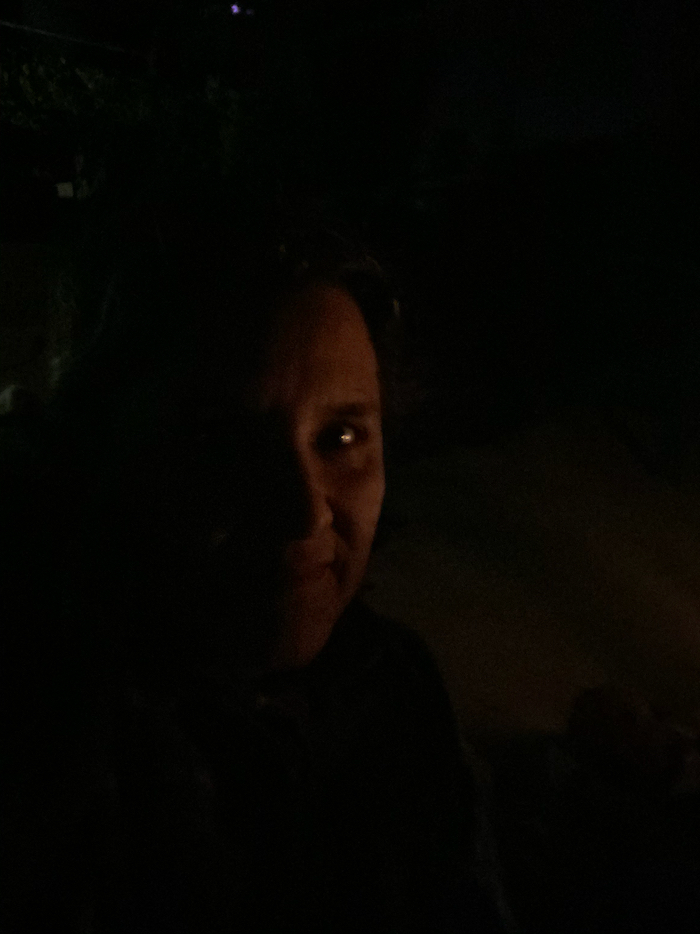 I had a good fire going. William made pasta, and sat with me. We saw many meteors. Bright. Pretty. Some very big, and blue. A friend on Instagram, she lives south and east of us, joined the watch from her home. She shared a chart describing the make-up of different colored meteors. The blue meteors, and they are very, beautifully blue, are composed of magnesium. I saw one that burned brightly, moving toward me then disappearing, and I was left with the idea of having seen a fantastical blue fairy. Is "fantastical" even a word? This Blogger version offers no help with spelling. 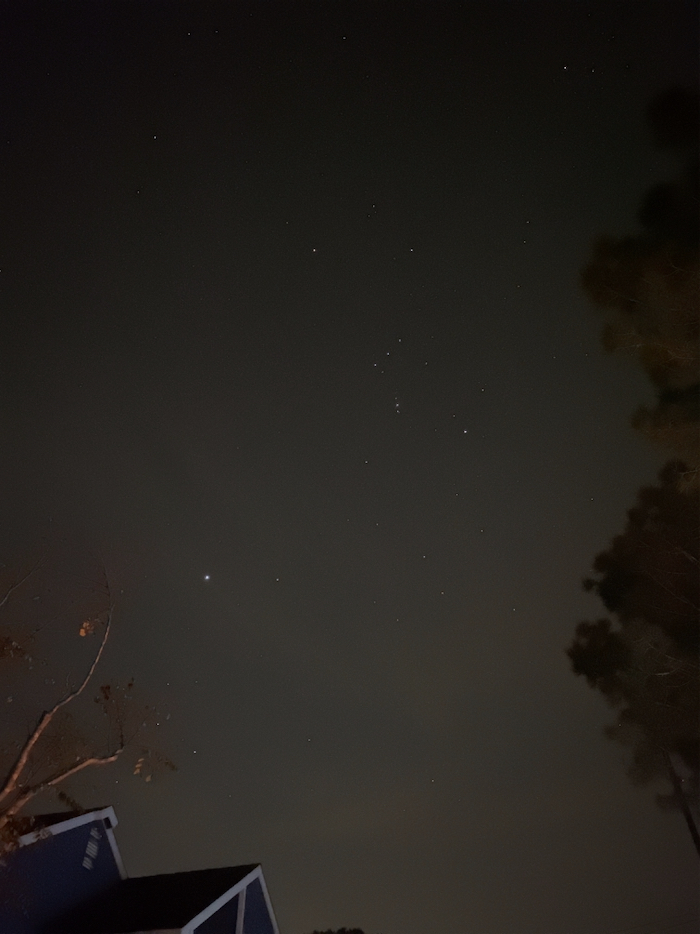 Now moved over the house, westward, Orion's belt is almost overhead. And brighter, lower in the sky is Sirius, the Dog Star. A favorite since I met the brightest star visible from any part of Earth, last summer. 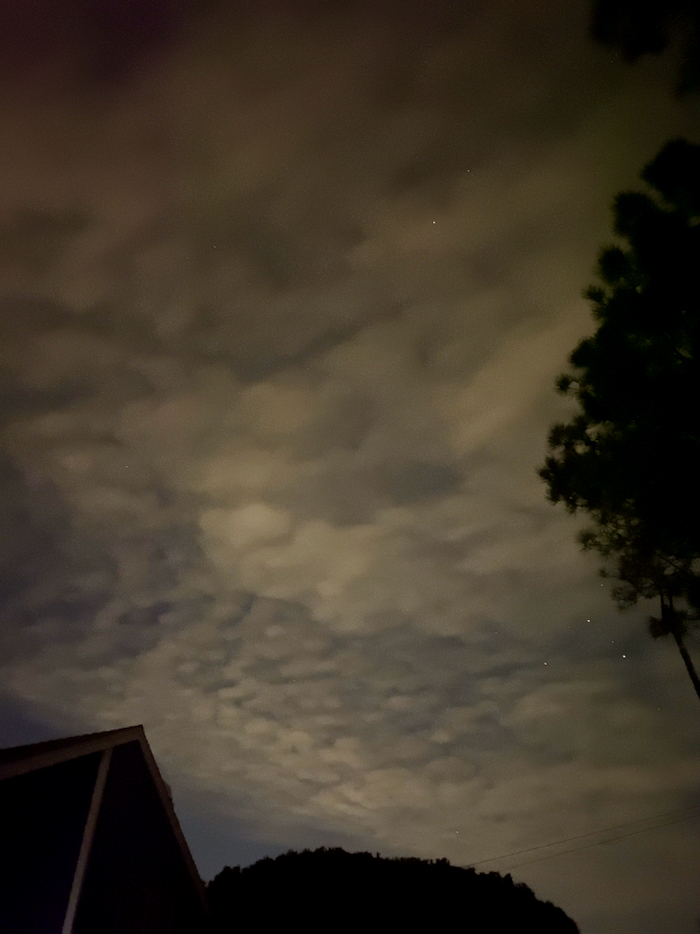 Then, more clouds. A darker, and clearer sky would have been fantastic, but it was never dull. The sky was always compelling. Or there was music, talking, and night-day dreaming. 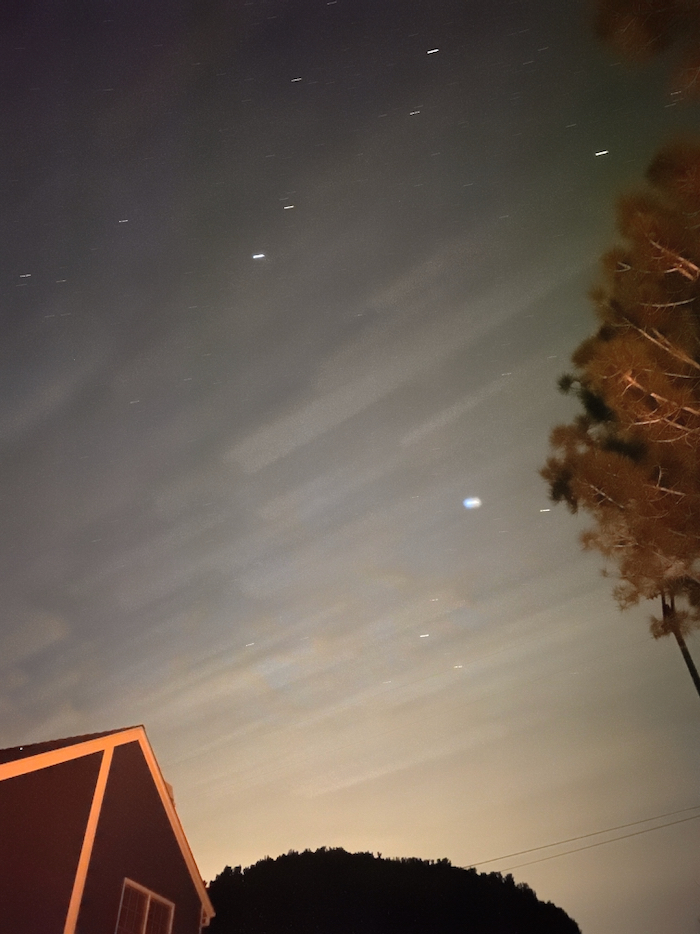 Geoff put my phone on a tripod to see about capturing a meteor. Here is an experiment with long exposure. Light streaking across the image, and the sweeping path of clouds traveling from the coast, inland. 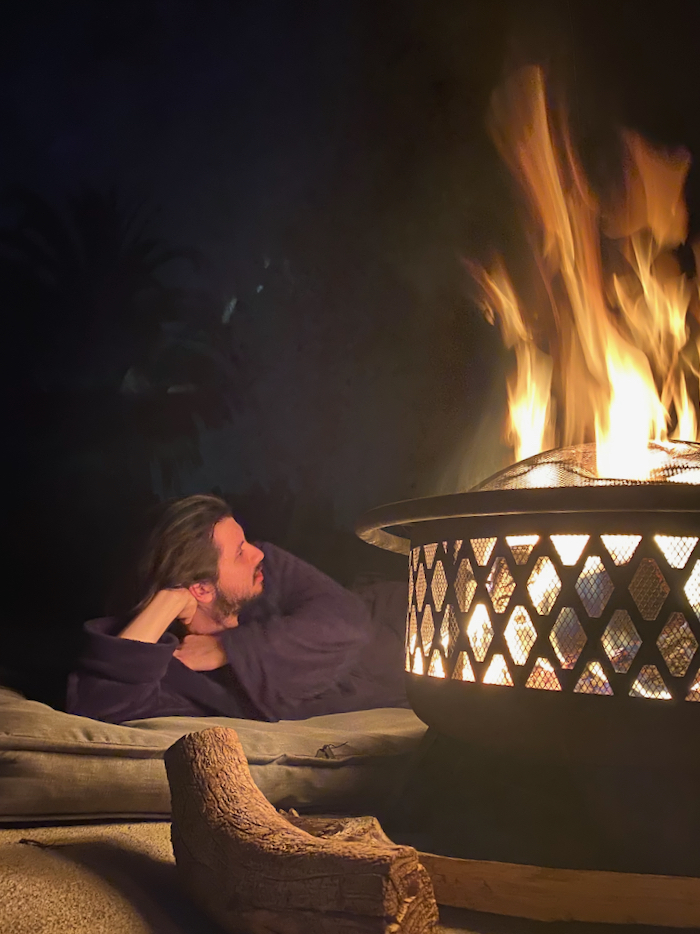 Max watched with me. We listened to Starman, then Laszarus, then Max posed a question. "What do you suppose would happen if for one second gravity had no effect on your body?" I knew he was not speaking metaphorically. He turned toward me and asked, "Would you like to help me figure that out?" To begin, he needed the diameter of the Earth, and I asked Siri. The answer is 7,918 miles. He took it from there, in his head... After one second without gravity a person would move a neglible distance. The Earth is moving, too, he reminded me, and in such a brief amount of time, the event would be almost imperceptible. After one minute without gravity you would be about 193 feet above the Earth. After an hour, your body would be 123 miles from Earth. 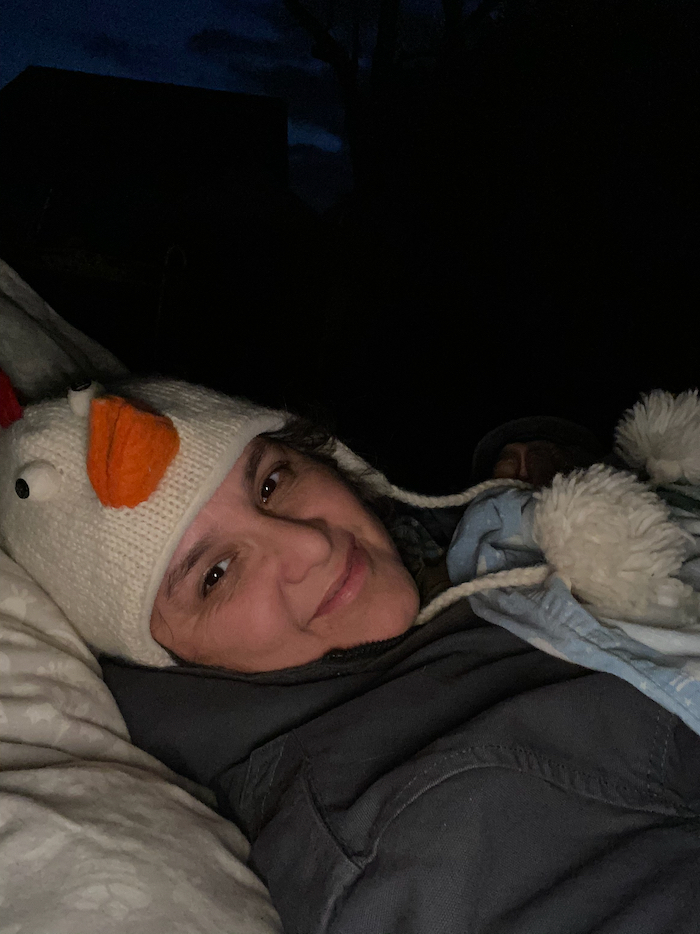 I stayed out all night. It was wonderful. 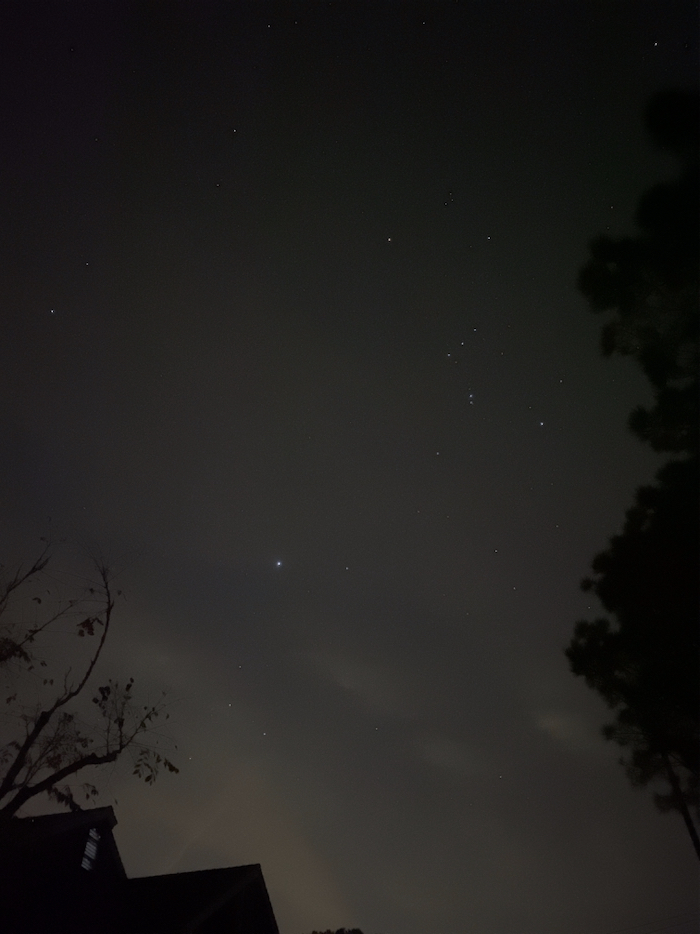 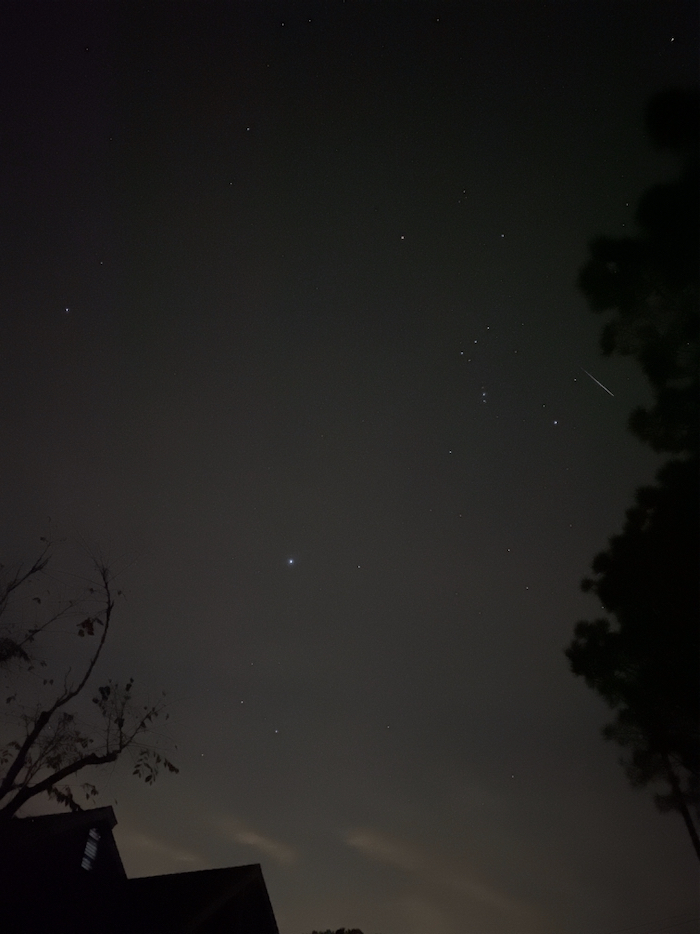 And we saw meteors. Then Geoff caught one, a streak on my phone screen. The silhouette of the tree about to grasp it. 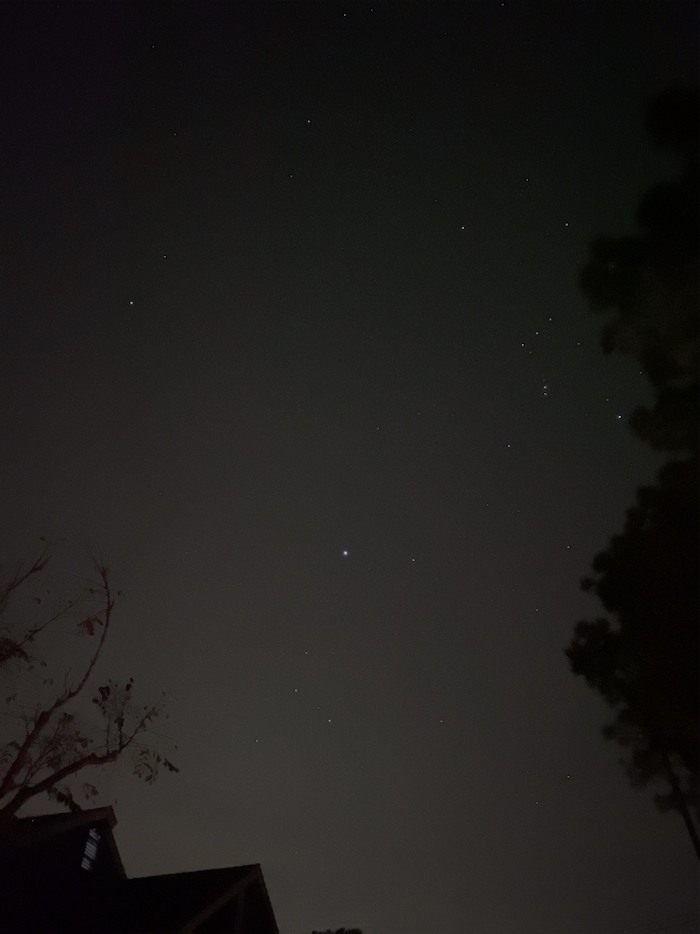 And Orion moved west. Mars dipped beneath the horizon. Venus rose before the sun.
Posted by Natalie, the Chickenblogger at Monday, December 14, 2020

Thanks for sharing your night watching the sky. It's too cold up here in the north of Oregon to do such a thing this time of year. ((hugs)), Teresa :-)

Hello from Italy! What a wonderful night with stars and meteors.
Bye
Eleonora

Love all this... but possibly my favorite: "I knew he was not speaking metaphorically." <3 LOL!

Also, great profile photo of Max at the firepit!! :)