Pin The Tie on Sponge Bob 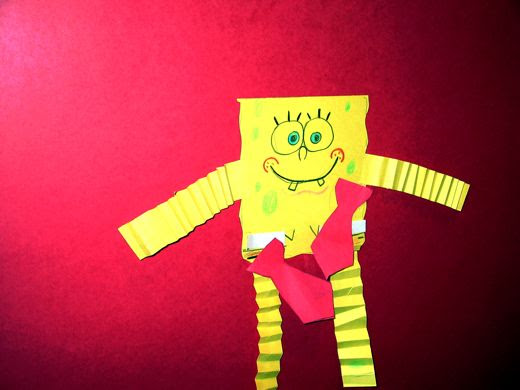 Yesterday's celebration was meant to be, in William's words, "something quiet...not really a party...just dinner, maybe pie... some friends..." Well in spite of the initial Saturday morning panic cleaning, and a last minute request to have a Sponge Bob theme, we had a fairly close approximation of the initial proposal. Well whatever it was, it was fun.

It never was "quiet." The boys (except for Nicholas who enjoyed an unfortunately timed nap) caught up on joke telling and laughed a lot. They played outside and in, blew bubbles and played the "Pin The Tie on Sponge Bob" game that William and Alex made. All their noise sounded like happiness, joy, silly amusement and fun. Good noise. Good friends.

By the time Nicholas joined us we were watching Geoff as he gathered the materials to meet the specifications of the Magic Rocks kit. My last minute attempt to honor the Sponge Bob theme included: yellow straws and plates, streamers (which sat, packaged, on the table through dinner), bubbles, construction paper (for the before mentioned game), Goldfish crackers, and Magic Rocks as a take home torment prize.


William enjoyed new books and new art supplies, and a new friend named Earth Worm Jim. He's been sung to and taken to Disneyland, and now he has even been praised in *poetry by his Grandma Ruth (Tutu, in Hawaii):

William's a kind and caring soul, a gentleman, it's true,
He loves to read and fantasize and tell a joke or two.
A hearty laugh's his calling card,
Adventure is his game,
He makes movies and rocket ships
And he's ready with the quips.
I must write, though I'm no Dickens,
I'm fond of William and of chickens.

*This is a first time, outsider contribution to Chicken Blog. While the author did not request publication, the poem merits being published and not just because she included chickens.

Thank you to all, near and far, who joined us in celebrating William's birthday.

Last night, as I lay sprawled across my bed, still wearing my apron and trying to muster the oomph to load the dishwasher, carry Max from the sofa to his bed, and possibly brush my teeth, Alex came to me with a pencil and notebook. "How many days until my birthday?" "More than a hundred." Undeterred, he suggests we begin planning now. Smart boy, my Alex.
Posted by Natalie, the Chickenblogger at Sunday, March 02, 2003

For the second time, we received a wrong order from Amazon Fresh. And, can I just say... Not Our Order is easily becoming a highlight event of Stay At Home Season. Last time we got frozen pizza, and tofu, produce, apple juice. Revealing each item brought cheers and exclamations. Apparently, we love the unexpected with the random. This time, when Geoff opened our grocery bag and pulled out Wonder Bread... I blurted, "Oh, my f***ing A! What the what??" Because, apparently I love unexpected and random, but I also judge real hard. They sent us pre-fab taco shells, with square bottoms, and tiny bags of mini-muffins, too spongey to be made of natural ingredients. Life is like an Amazon Fresh Delivery, you never know if you are going to get some weird sh!t By the way, someone in the area is getting our Special K "with red berries." "Red berries" are natural, right??
May 26, 2020
4:12 pm