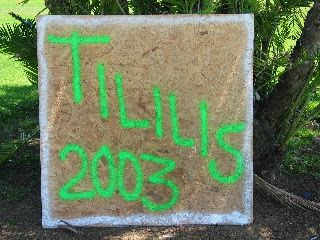 I will begin by saying: I will never be able to do justice to all the names, history, relations and chisme. The Tilili reunion is a large family gathering, that includes primos and tios, abuelos and hermanos, hijos and nietos, and the relations are extended and removed and twice removed. One thing that is distinct and endearing about Mexican family relations is the emphasis of proximity. We don't much go for "second cousin, once removed." First cousins are not merely cousins but "primos hermanos," which means cousin-brother; you then know that one of each of our parents are siblings.

Okay. Too much talk. Not enough story.

This year's gathering was much smaller than ones in the past. Especially missed were the most senior members of our clan, my abuelos. They are not as willing to make the 16 hour journey from their home in Sonora. It is a very long trip for them,and this year they stayed home. My grandparents had 8 children, including my Dad, Ismael. My Abuelo had many sisters and brothers, and primos hermanos and some of them and their children and grandchildren were also present. All of this started in Tacupeto, or Cuba, or Eden; depending on how far back you look.

The event was great. There were no disappointments or major mishaps. Just the usual slow, awkward start, and then the fade in to relaxed familiarity, the ease of inhaling platters of delicious food, the torturous bliss of adoring all the new babies. One look in to baby Gabriel Alejandro's eyes could make even a tired woman ovulate. His eyes are deeper black than any I have ever seen and still they shine light and laughter. I think it's his mommy's joy that his eyes are most often reflecting. 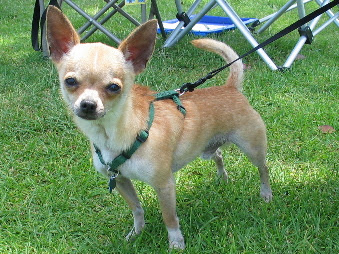 Here is a guest that is no relation at all, but I wish I could call him my own. He came with my Tia Elvira. Are you ready for your Eh-Spanish lesson? His name is Sniffy. Now let's enunciate together: Eh-Sneefy. This is the first dog that doesn't scare Max; they were the best of friends. Actually all the children wanted to be Sniffy's friend. That little dog was probably the most worn out body of the day.

My brother-in-law, Spencer, may have gotten a little worn out as well. He spent quite awhile helping Max learn to ride a bicycle. You have to assume a stooped, yet fast moving posture to steady a 5 year old on a two wheeler. Primo hermano James lent the bicycle, and the lesson went well. At least there were no serious spills. Max is probably ready for a bicycle of his own. That's a nice aspect of family gatherings; we can be together in the common interest of support, and love for each other and our children. We shared our stories and pictures, old tales and new ideas. We shared our cooking, and our lawn chairs, our bicycles and skateboards. We shared our time, and caring. Everyone is growing so fast, that without getting together and noting the changes it is too easy to lose sight of how far we have come. William and Gil, Jordan, Elias E. and Danny; its seems like they were the babies, and toddlers only a little time ago. We have come far, and in good company.
Posted by Natalie, the Chickenblogger at Wednesday, August 13, 2003