One of the Crowd

It's the original, and like no other: It's Comic-Con. It's comic books and artists, writers, characters, posers, geeks, nerds, superheroes and anti-heroes, it's garbage and flyers and swag, weirdness, classics, cutting edge and cutting room floor. Comic-Con began as a comic book themed convention, in San Diego, in 1970. It's grown and it's evolved, and I can't help but feel that it is forgetting its roots a bit... it's in danger of being over taken by the Hollywood-Corporate-Commercial Machine and all of those big spenders tend to drive out the smaller franchises, small (and skilled) talents, local talent. If I were a journalist I would have a hard time deciding my angle on this story... Comic-Con: History, Lore, Changes, Venues, Artists, Video Games, Genres, Movies, Animation, Manga, Anime, Toys, Fans, Graphic Novels, Comic Books, Comic Strips, and a fervent wish that the organizers and attendees would Go Green... swag, flyers, cards, leaflets and garbage were everywhere! What Would Wall-E Do? 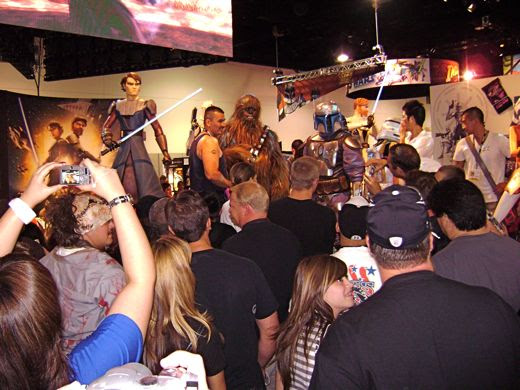 It is a spectacle. Sights and sounds from all directions and plenty of people eager to see and be seen. There is some temptation to go in costume. The creativity, the atmosphere of play is inspiring and infectious. I think the attention you could draw might be overwhelming. I like that at Comic-Con there is an opportunity to attract attention to yourself, to be amusing and interesting and have people want to take your picture, and it has nothing to do with being an empty celebrity, famous for your inheritance or ability to promote your youth and shopping habits. We enjoyed seeing Chewbacca, and in the past we've met famous authors and artists, but the surprises and draw of the convention are the real people, the geeks and fans, the enthusiastic individuals enjoying a day, or 4, of playing with fantasy and creativity. And at Comic-Con anyone can be a part of the scene. 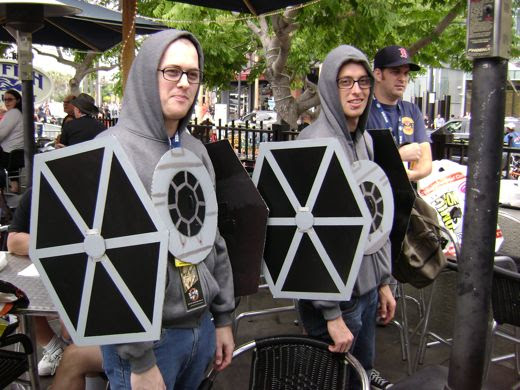 Anyone can be a part of the scene. Starfighters from "Star Wars?" Yeah, we saw the Tie Fighters getting lunch. 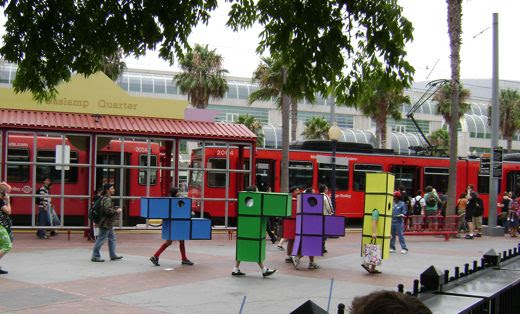 OKay, I will admit not every subject matter at the Comic-Con is family appropriate, or even particularly praise worthy from a peace loving, love and harmony perspective. Maybe some expression is a safety valve, an outlet to relieve pressures. Maybe some expression is simply scary and best avoided. It can be a microcosm, a sampling of the good, the bad, the ugly, the absurd, and the earnest endeavors of creative people. It can be really funny. When these Tetris pieces walked by, a spontaneous chorus hummed in the crowd... the distinct tune was a heartfelt tribute to these collaborative enthusiasts. 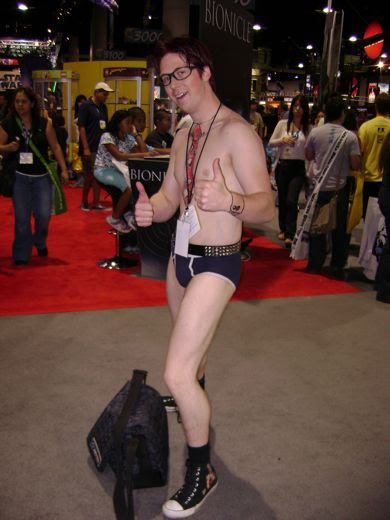 I've seen plenty of scantily dressed shegeeks... nothing any less naked than beach attire. Too my amusement this was the first year I came across hegeeks in their under-roos! Hilarious. 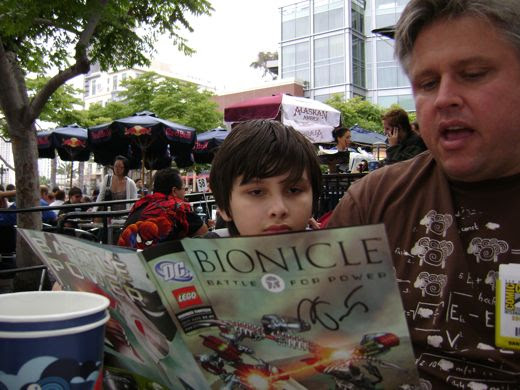 We go for the camaraderie, the talent of writers and artists, the encounters with enthusiastic people and to enjoy an atmosphere of play, where people can be themselves or be an alternate self... And we go for BIONICLE, and the comic book series that William, Alex and Max have been enjoying since 2000, or was it 1999?*** They met the writer, Greg Farshty. Alex spent a long time talking with a master-builder from LEGO.

***Update: William informs me their BIONICLE interest began in 2001. 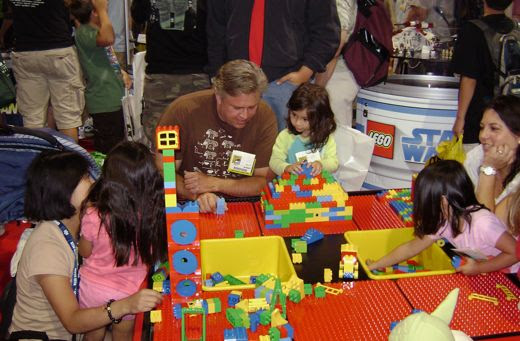 Geoff and I took turns at the LEGO table with Maria... for hours! 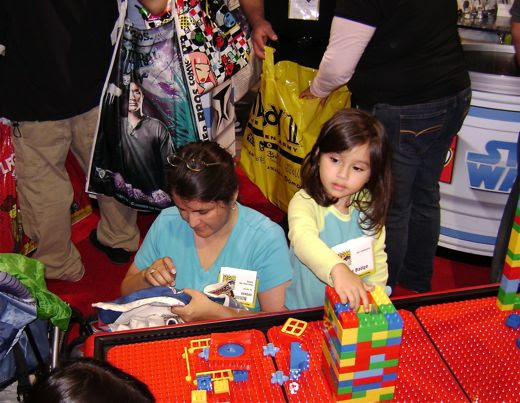 Technically I am a geek by marriage. I brought my quilt and was happily immersed in my own fantasy. I wish I had done this other years. 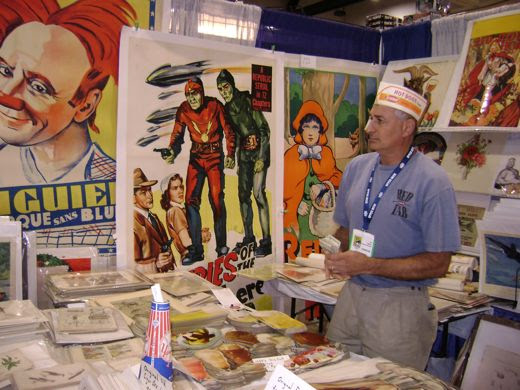 I never could find the booth that was reputed to be selling Totoro T-shirts. Bummer. But I had a good time going around the convention floor, and taking in the sights. Watching people sketch, seeing familiar faces and publications, reading other T-shirts. I loved the graphics this booth was offering. I loved how he would light up enthusiastically when people admired his collection. Success? Success is loving what you do and finding a place where you can share it. 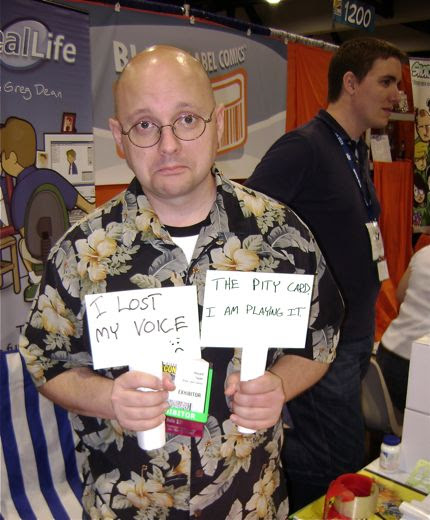 Eventually we have to leave. It takes awhile for there to be consensus about when exactly that time is. This year Alex wanted to stay much longer. I think we should seriously consider buying our 4 day passes for 2009 now. This guy lost his voice, which is one of the many hazards and risks we face at Comic-Con, but by next year we'll be ready to face it all again. Rest-up Howard, there are only 357 days until Comic-Con 2009.
Posted by Natalie, the Chickenblogger at Wednesday, July 30, 2008

Any Stargate SG1 stuff there? It's my all time favorite show! I like Atlantis too but not as much.

I love hearing about all the interests of your family. I never know what I might find here, and that's wonderful!
By the way, mamaspark, I am a Stargate SG1 fan too.

LOL at you being a geek by marriage! I'm still chuckling over that one.

And what a good idea to take your quilting along too. You gotta get your creative time where you can - I thoroughly approve!

Wouldn't it be great if Alex could BECOME a professional Lego geek?

OMG!!! My daughter's first favorite movie was "My neighbor Totoro!" I can't believe it - anyone else I have mentioned it to has said "huh?"... Yay!!!!

What day did you go?! We were there on Saturday! :) We shoulda hooked up with ya'lls!

Ken, Dean, and I were all so impressed (and a bit jealous!) that you were able to attend; like so many of the wonders out your way, we know about them but can't participate. Dean said to Ken, "Max went to Comic-Con and got the autograph of the Bionicle author guy" and Ken said "Farshty? He met Farshty?!?" Ah, yes, we too feel the love and have been Bionicling since the beginning. And a Totoro shirt would have been the bees-knees! Thanks so much so sharing photos and stories from your day (and congrats on finding the camera cable!).

That event looks very fun and I had a good laugh at the guy in his undies!
Mary:)

OMG, my boys (all 5 of them) would love to go to that. It includes all things they love!