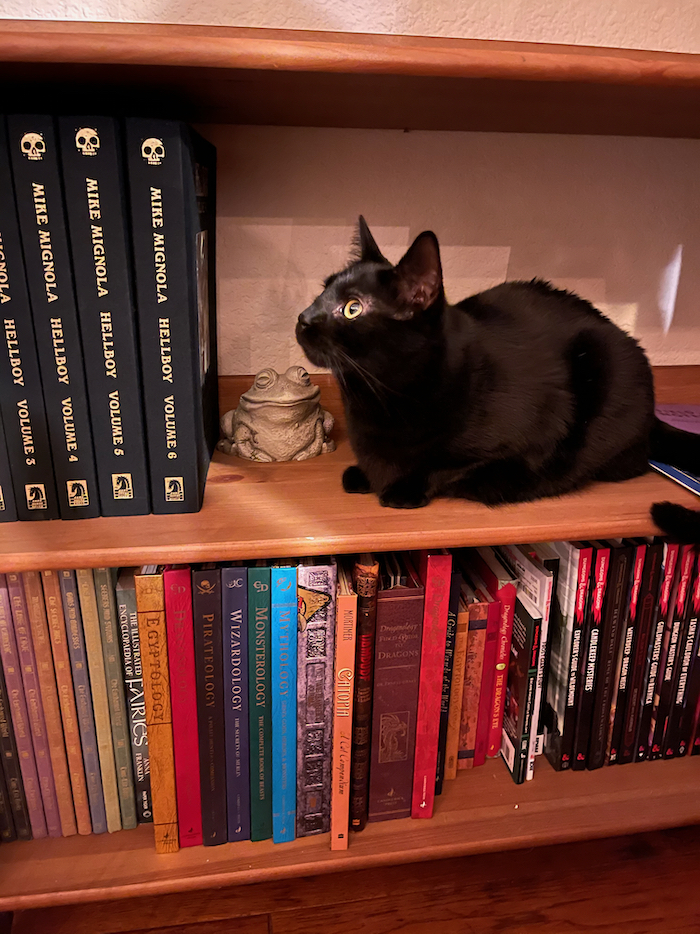 The expression I looked everywhere is a good example of hyperbole, but it is also the complete and utter truth, practically, about my effort to find my glasses. This morning I looked everywhere for a pair of glasses. Everywhere. For just one pair, of 6 possible vision correcting glasses. I had the teal and brown pair which disappeared a year ago, then there are the twin pair of teal framed glasses that darken in the sunlight. I bought one, and when I went back to add a second pair, I unwittingly chose the same frames, which proves I really like those frames. I have a pair that are metal frames, with little laser cut shapes. I can't think when I last saw those, but they couldn't have gone far. We don't go anywhere! The last two are the serioiusly desperate pairs, including 20 year old pink, wire frames that are so wonky they make me look like a disreputable Dickens' character, and those are the prefered ones, because my last pair are broken broken. They are missing a temple, and so I rigged a lanyard to the working temple and to the hinge on the other side, and then I cinch the glasses to my head. I looked in every vehicle, under every bed, beneath chair cushions, behind that thing where I know stuff gravitates, but is dark and embarrassing so I avoid it. I searched all counters, drawers, shelves, and baskets. I searched coat pockets. I questioned the cats. Incidentally, the cats lie, and they withold evidence. I found the furniture pads that we were surprised to be "out of." We weren't out of furniture pads. Someone put them in the entry desk. Probably me. I found the chocolates I bought for Easter, and a package of those small cereal boxes, that people buy when they go camping or move to a new house. Maria's never tried Apple Jacks. I found my favorite crocheted beanie. It's soft wool, and I love to wear it in winter when I go to bed, even though it eventually slips off, which explains why it worked its way down to the floor, beneath our headboard, where it lived with an errant sock, a wayward tissue box, a missing earring, a lone hair tie, and a herd of dust buffalo. I found the bite guard my orthodontist made for me after he removed my braces before I was married... so that would be June 1989. I found my courage... just kidding. Then, at last, I found a pair of glasses... they were wedged beneath and behind the sofa, and the end table, and maybe a dark sock. This pair is one I didn't even think of, neither old, nor broken, but actually intact, functional, not bad looking. Somewhere in this house, are six other pair of glasses, and possibly my courage, which may be in the company of my sanity, and a wild herd of dust buffalo. I blame the cats. Tomorrow I am making an appointment with an optometrist, and then I am going to order new glasses. Geoff is ordering me a lanyard, and he says he is going to add a thing finding device to it, and so I suggested he go ahead and order me the I've fallen and I can't Get Up alarm to add to the lanyard.
Posted by Natalie, the Chickenblogger at Sunday, April 25, 2021

"Somewhere in this house, are six other pair of glasses, and possibly my courage, which may be in the company of my sanity, and a wild herd of dust buffalo. I blame the cats." I'm laughing, at the image of the cats having a secret hideaway where they enjoy looking at their reflections in your glasses, or looking through the lenses at each other. But I HOPE you aren't accusing them of stealing your courage and sanity...

In the last year I have lost several things that made me also doubt my sanity, because I also had not gone anywhere since last seeing those things. Sometimes I found something else while looking, which is not necessarily much comfort. Eventually I did find the most important of those things, after months!

I think it's the dream of having little enough stuff that this would not happen, that makes me dream of living in a tiny house. Imagine only needing one pair of scissors, and a few writing implements...

Poor kitties... they're only general scapegoats, and I only suspect them of making my glasses hard to find! Feynman, especially, makes a regular sport of knocking things to the floor, and if they slide, he plays long games of hockey with them. Come to think of it, lifting our sofa would probably be a good idea!
Did you ever read The Borrowers? I think there may be something to this missing objects phenomenon.
I share your dream! Maybe this is what I love about road trips, when I have all of my immediate needs and interests scaled down, manageable. One pair of scissors, a good pen and journal, the tweezers, and a solid pair of shoes. I wonder what I would count as essential in a small house?

A shinny black cat looking for your glasses too. Following your blog. I think people with reading glasses have at least 3 extra pairs at home. That's me, just like you too. I have one pair in the bedroom, kitchen and study. But mine are not expensive ones from the optometrist (I have one good one for work). I have no cats to blame, will a bird do?

Hmmm... I cannot be so sure that Sakamoto was helping me, but he was very curious about all of the changes and re-organizing going on. My husband, like you, keeps reading glasses everywhere. Those are affordable, since they don't require prescriptions, or unique lenses. My glasses are for distance, like when I want to read road sides, get good detail from a movie, or appreciate the landscape. Since those are more expensive I tend to keep every pair, going back 20 years, for emergencies. And since it's been 6 years since I last got new ones, I am happy to say that I had an appointment yesterday, and new glasses are being made! If there is any mischief afoot, a cat or a bird make fine suspects!