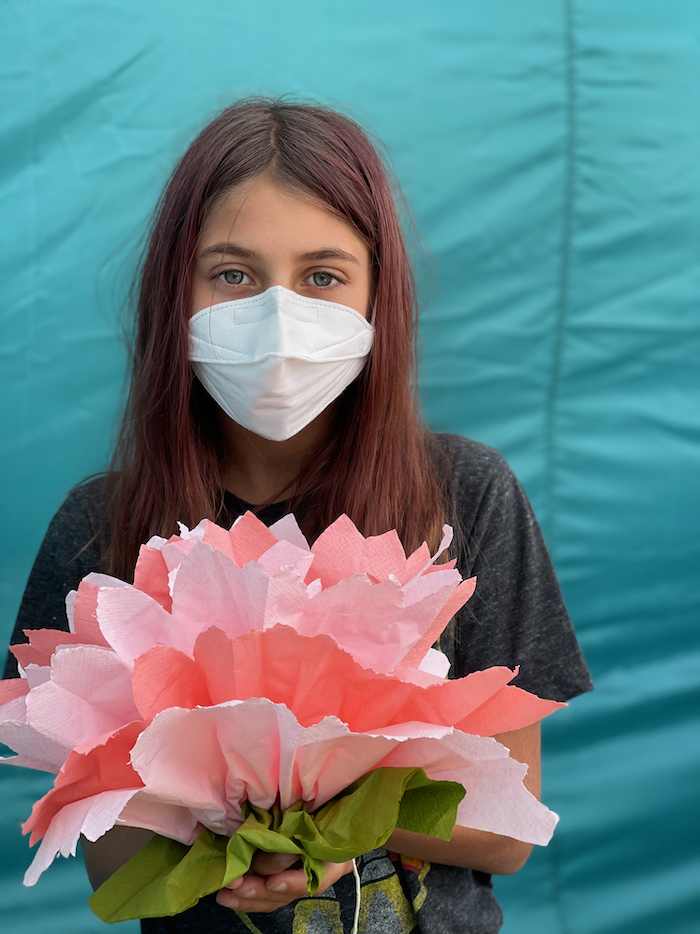 The more the merrier, and making makes us merrier, and the more we make, the... well, you get the idea. Supposedly a good title for blog posts will increase traffic and ratings, and give more polish and sophistication to your blog. Clearly, I am not on that path. 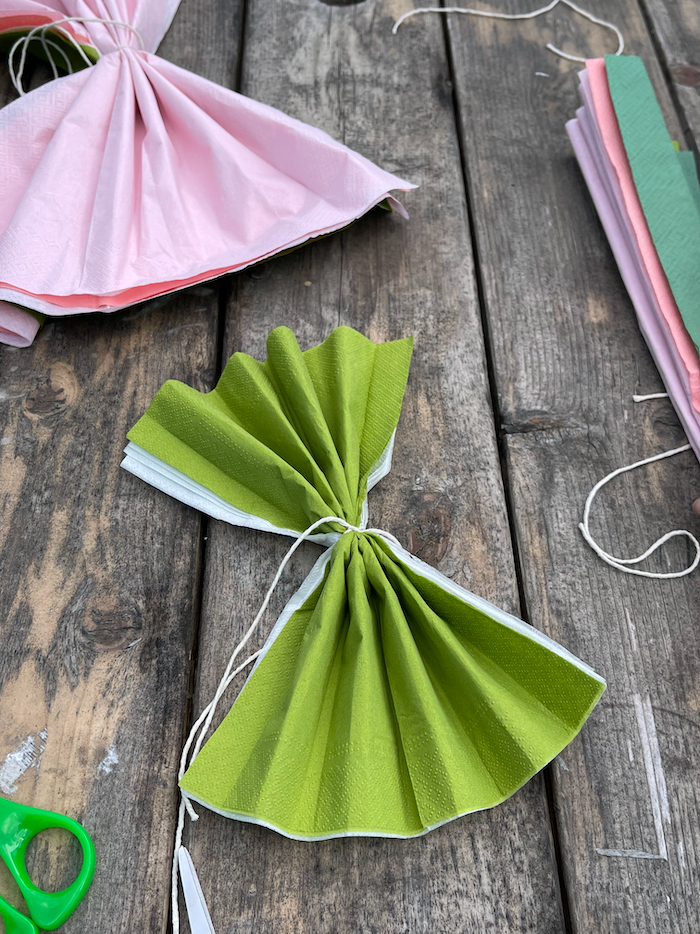 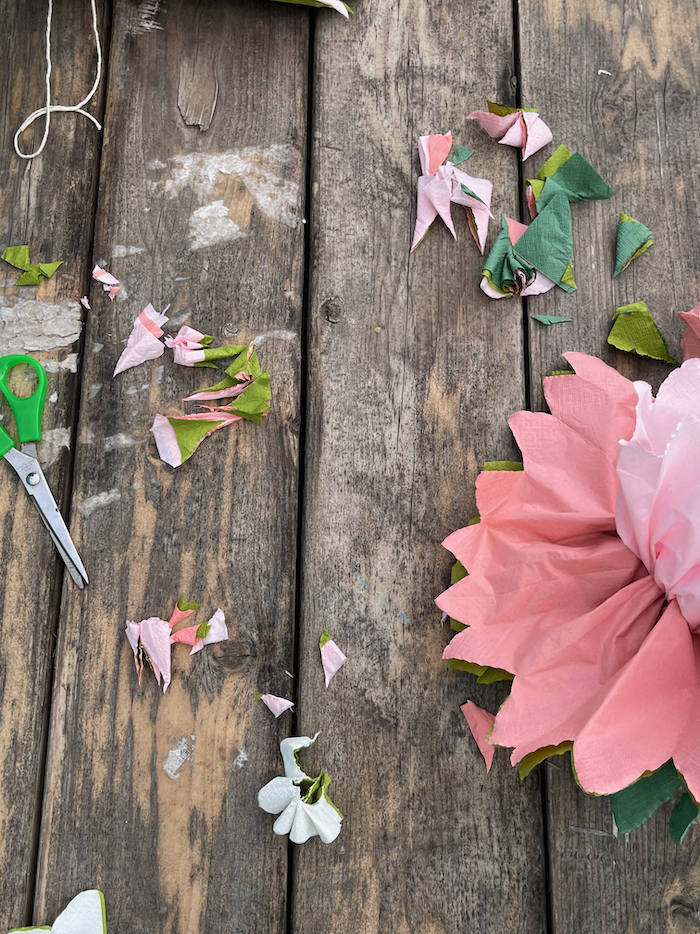 All I was trying to express, was that we were at it again, a happy work party, making flowers, and planting flowers, sprucing up, and even soldering. We want to make as many paper flowers as we can, for decorations. The soldering is for these very clever little mushrooms that Alex, Bambi, and Geoff have been devising. Now, they are assembling them and they look wonderful. Pictures, soon, I promise. It was a beautiful day, and fun, too. Hey, how amazing are our friends? Invited over to "work," which felt a lot more like play, because everyone made it fun, and so much was accomplished with a good mix of laughter, catching up, and sharing news, ideas, plans. If things continue like this, relatively safer for gatherings, I will be so thrilled to start up more of Maker events! 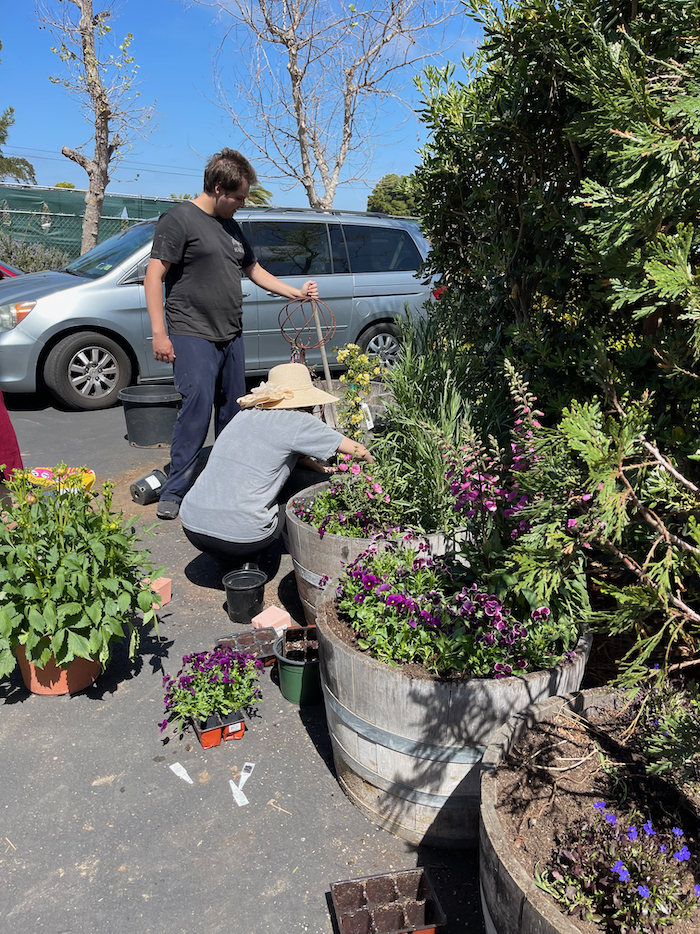 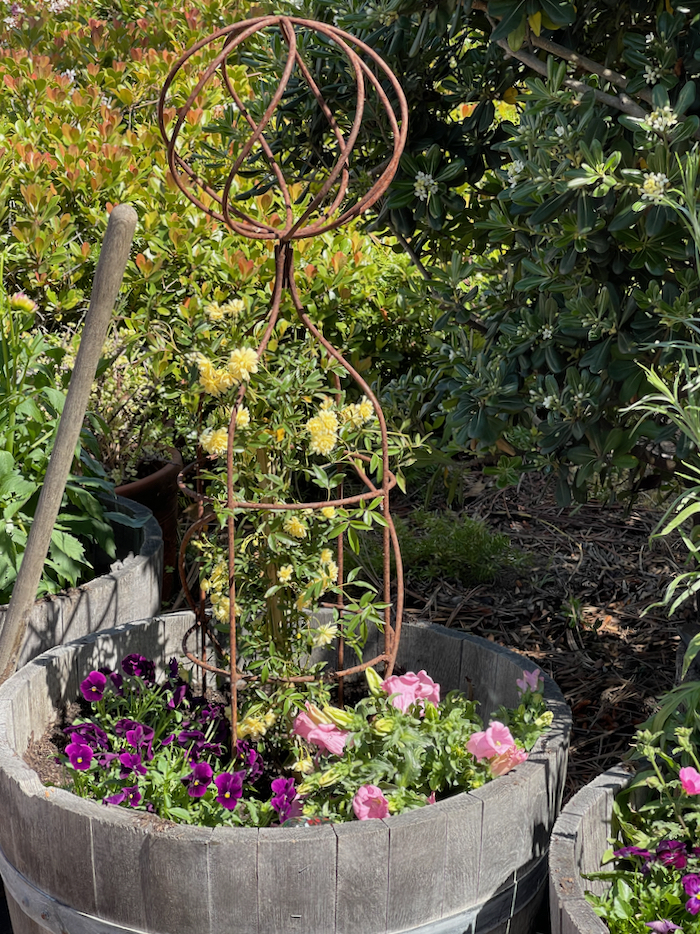 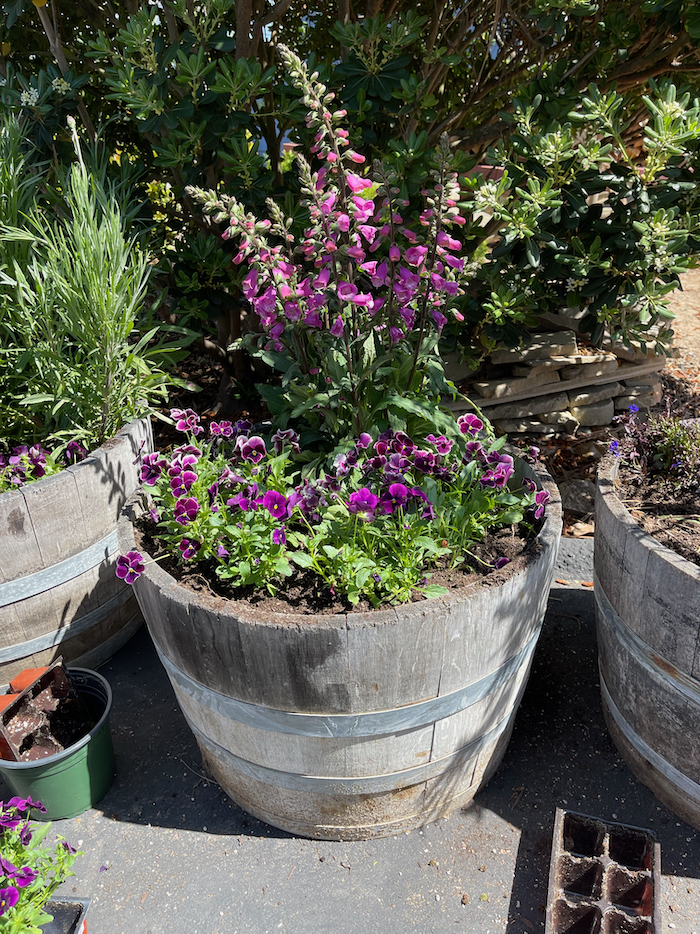 All of the old barrels I've amassed over the years were moved to the driveway, so we could fill them with new plants, and lots of flowers. I think I mentioned that my gardening energy was totally sapped after 2020. It feels so good to have more intention around the garden, to be growing flowers, even some veg, and to get these barrels full of life and cheer, again! I am changing, growing, and adapting, too... I was always in charge of my gardening. I did the hauling, lifting, planting, weeding, watering, planning, but it's not as easy as it used to be, for several reasons, which I won't dwell on... Anyway, suddenly, the work was getting done, and I wasn't in charge or doing it all on my own. I wasn't even directing. Bambi and Alex were taking the initiative, and Maria, an actual Junior Master Gardener, and member of the Native Gardens Club, was overseeing the planting, making sure root balls were gently cared for, and soil was loose, then gently patted down. Bex, and Alicia were mindful, fast learners. Bambi and Gordon were terrific. Suddenly, the barrels were filled, and pretty, and everything smelled good, felt good. I just took pictures, and delighted. Friends! And family, and all of this lovely busy-ness. What a brilliant balm, and tonic. 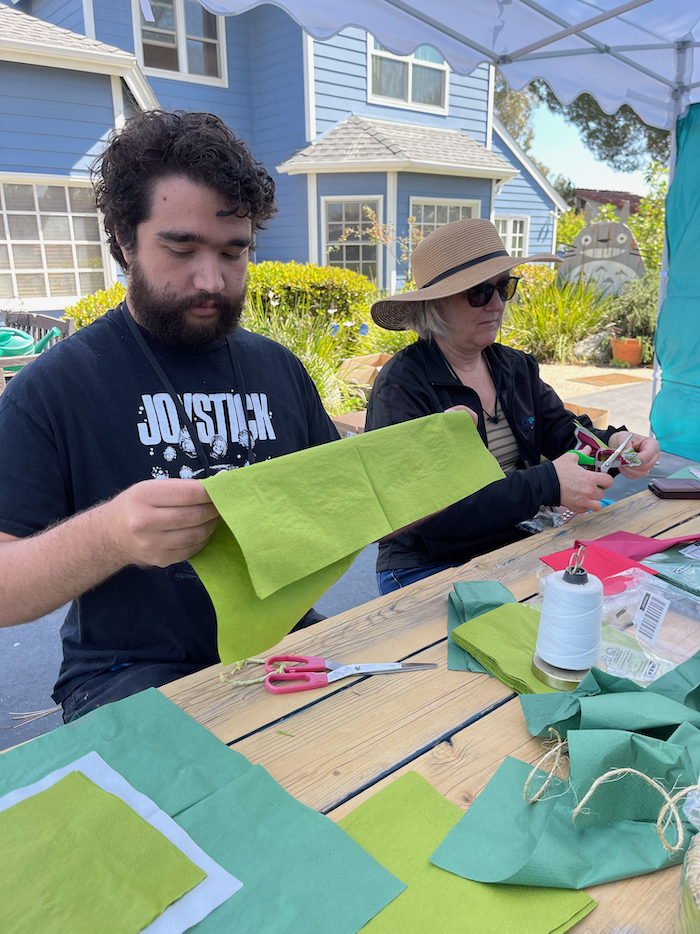 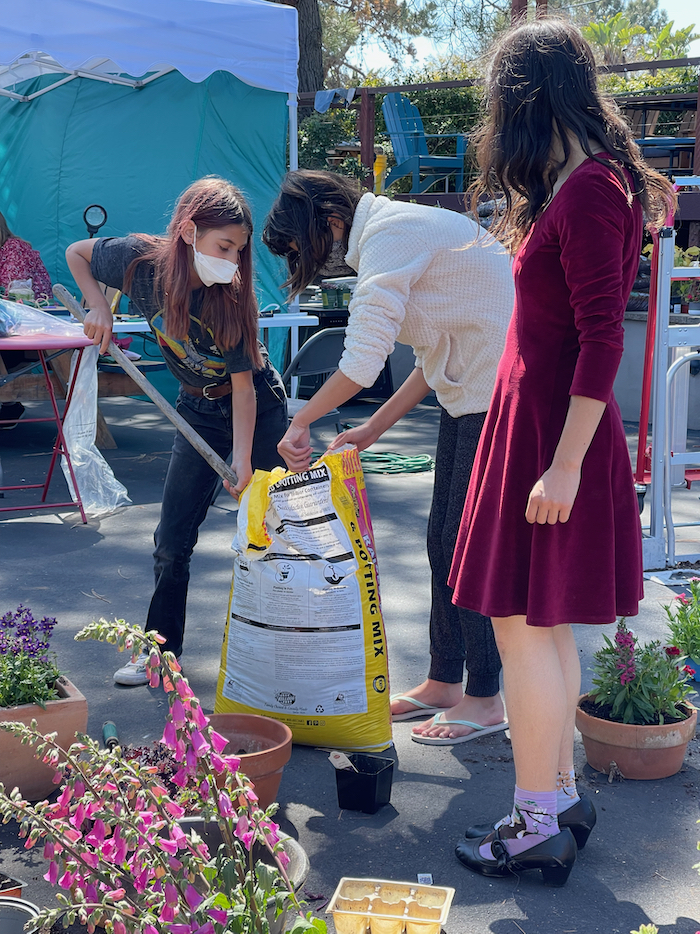 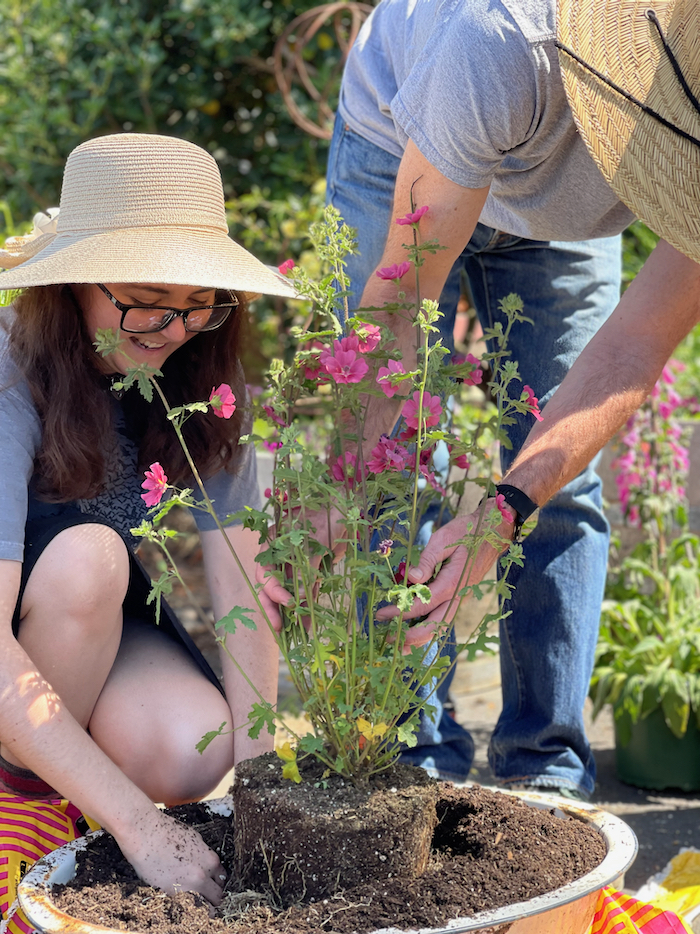 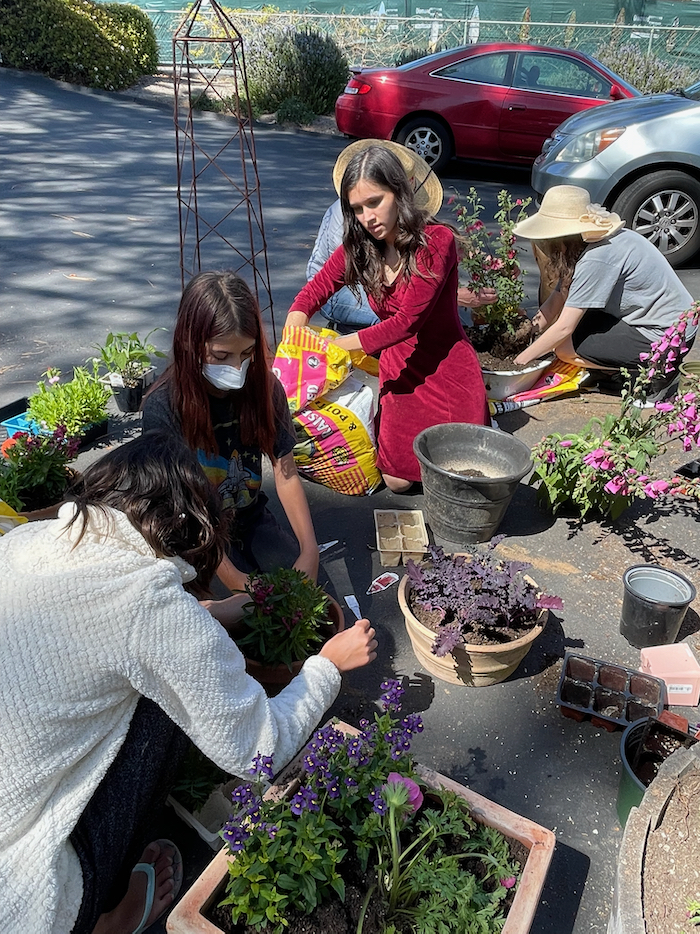 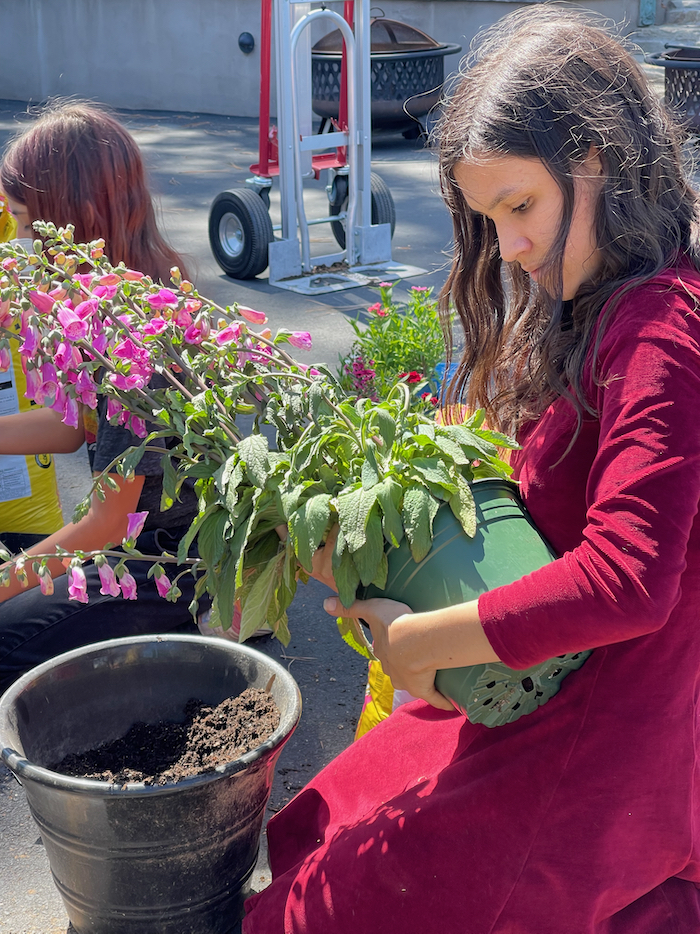 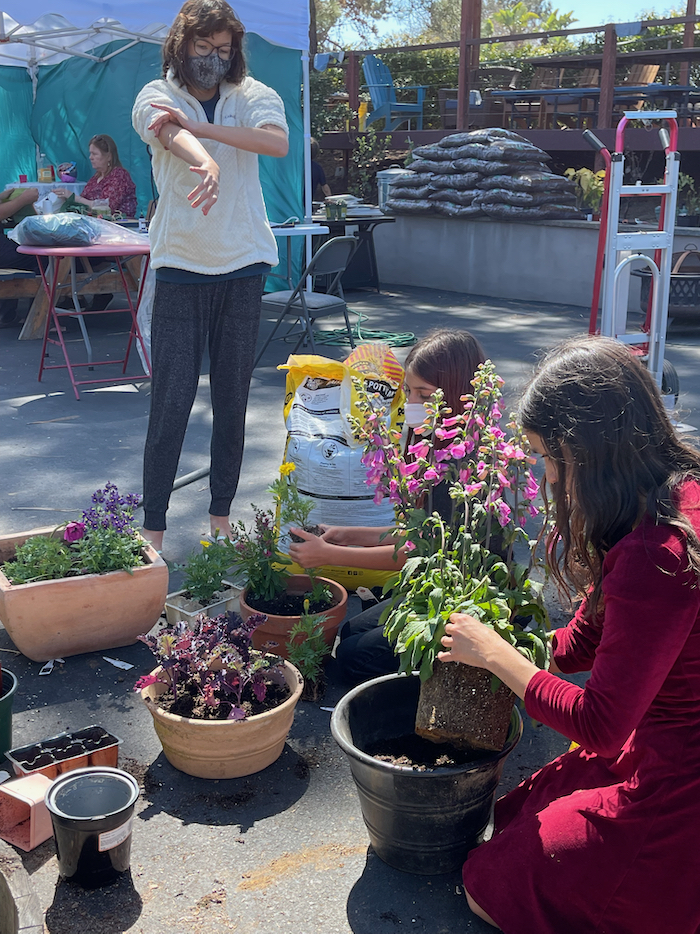 Alicia, Bex, and Maria
Geoff popped outside for a while. He is still tied to his desk, until mid April. Ruth came by, and she had paper flowers already made! Diana and Lucas were over, and we talked about all sorts of things, including good places to eat, ordering tunics, and Diana buying her first bicycle at The Yellow Jersey, Madison, Wisconsin. Leslie came, Bex came with her friend, Alicia, and Spencer brought Owen. Carol and Grace and Michael were a lot of help, and good company. Okay... I feel so happy about this, about how nice it is to be around friends, doing just about anything, I really do want to re-start the Picnic Days. 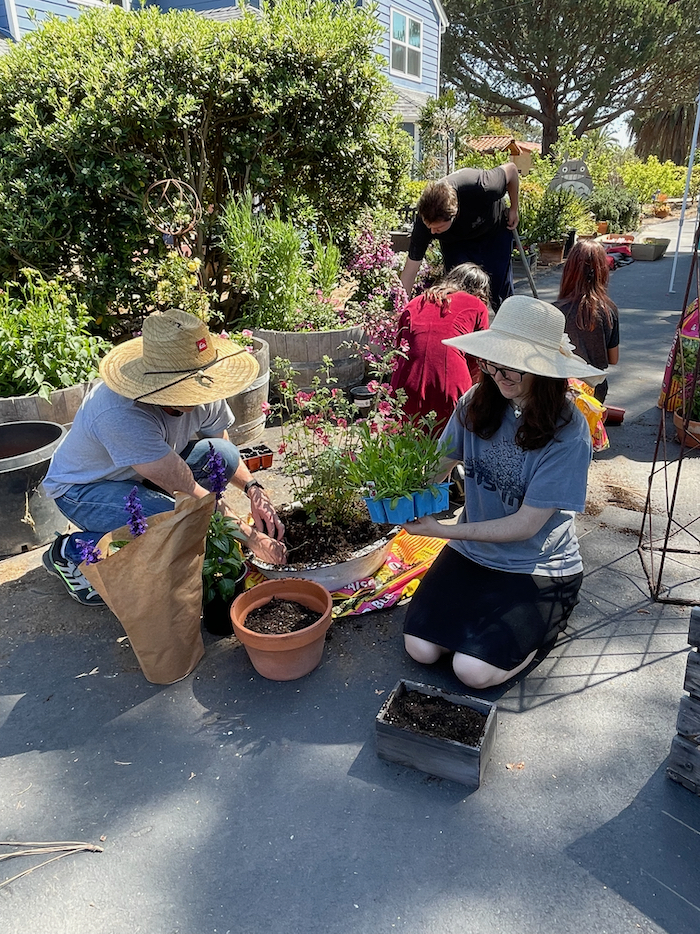 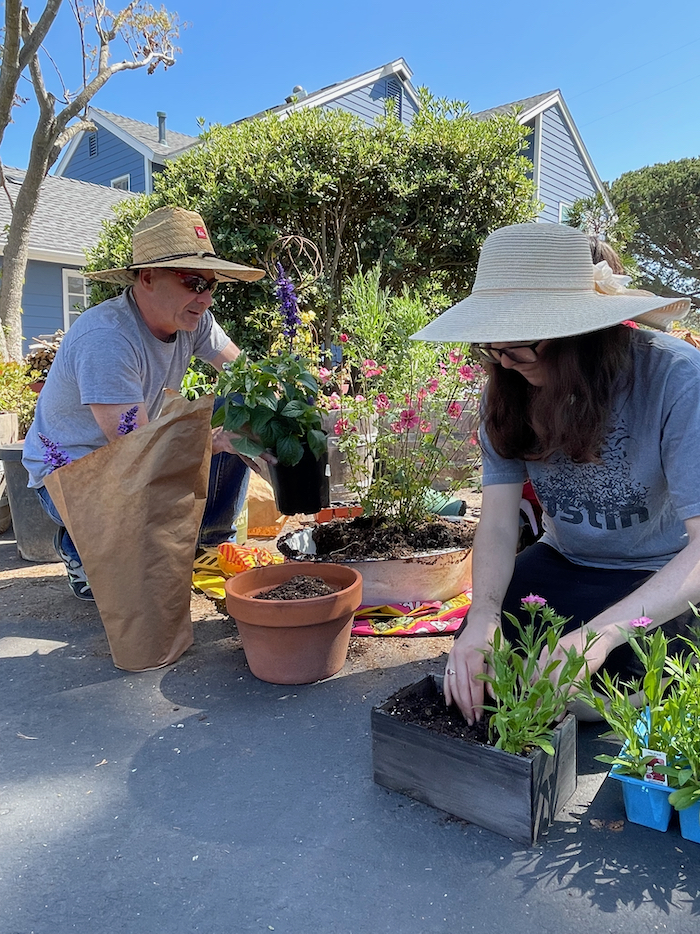 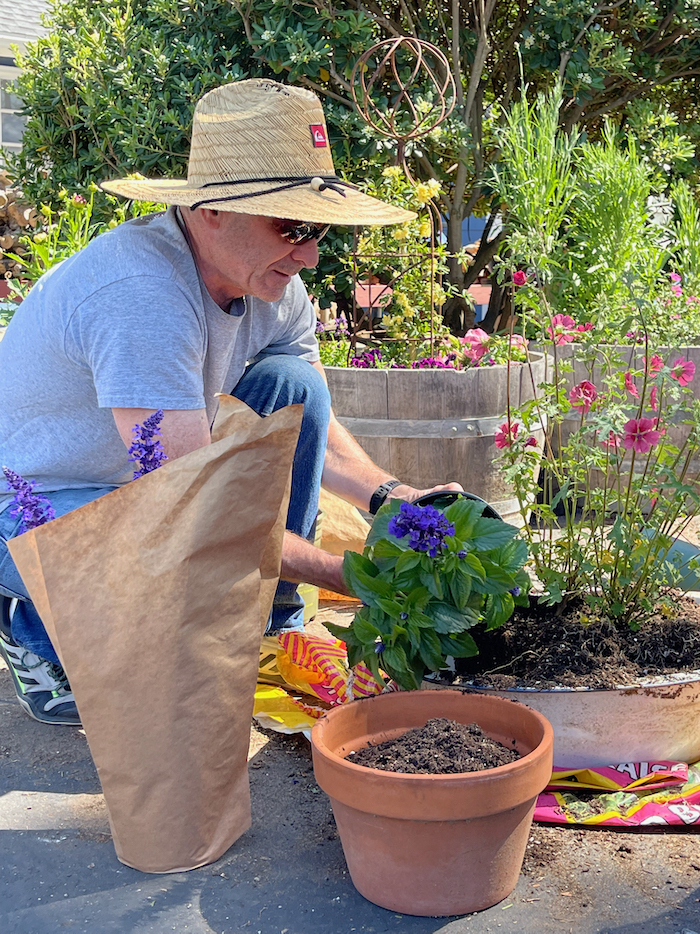 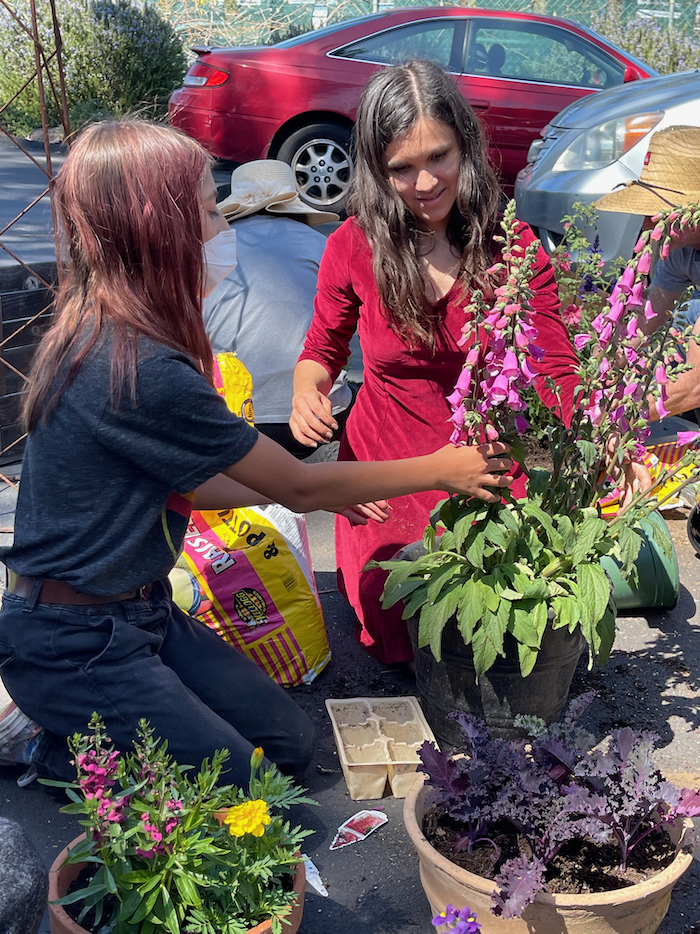 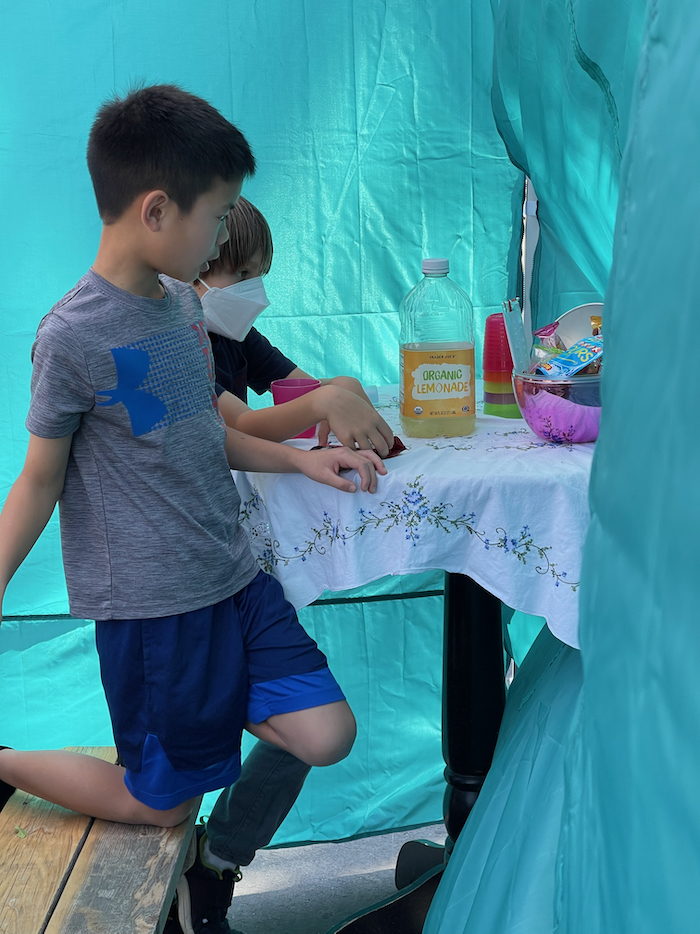 Owen and Spencer, checking out the selection of Japanese snacks and treats. 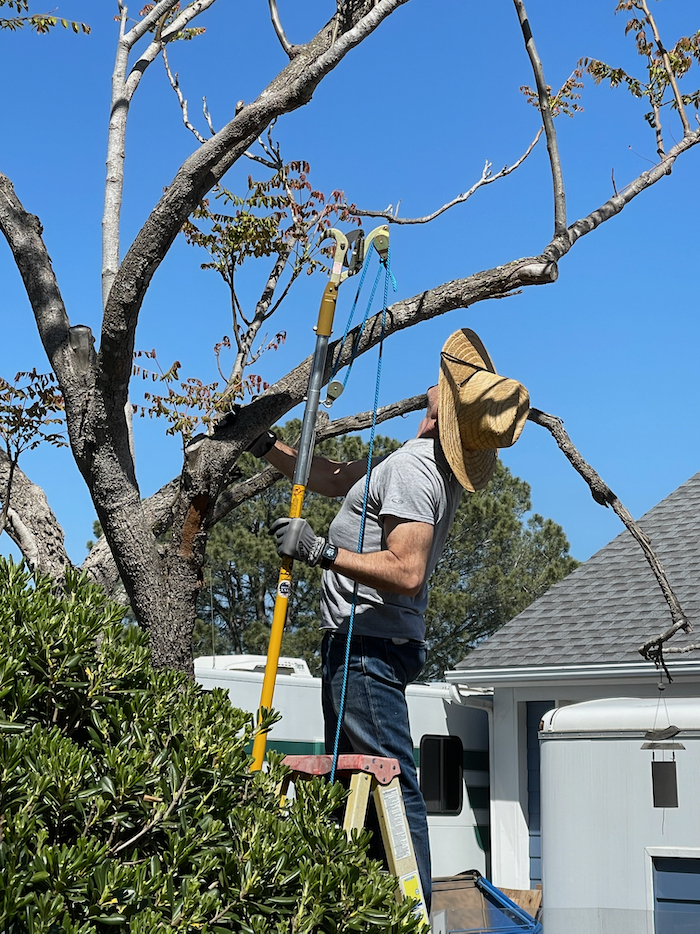 This poor tree often looks at the end of its life, but Gordon trimmed it up, and the improvement is appreciable. 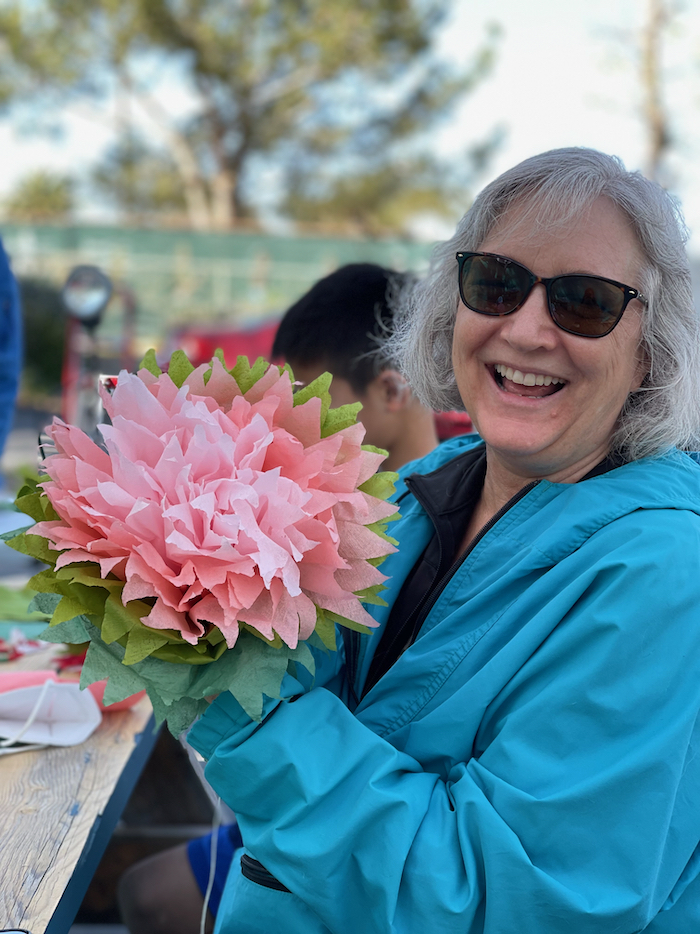 Diana was the master of seperating the flowers petals. She had the patience and gentle touch to pull apart the delicate layers of the two ply napkins, and the results were sumptuous flowers, like peonies! 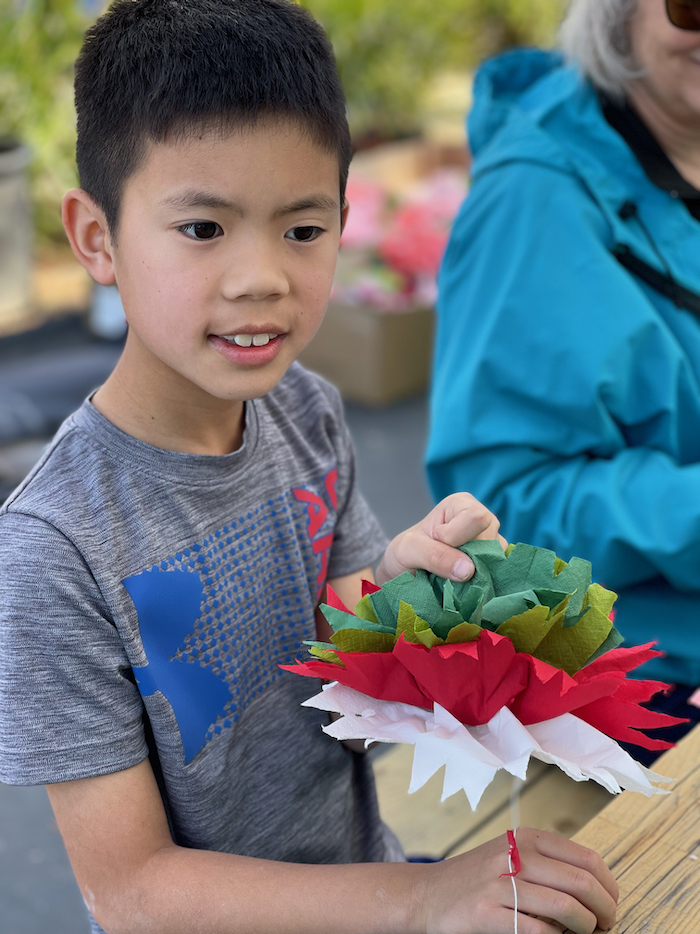 Owen tried his hand at flower making, too! He did great! Everyone does. If you would like to try, we have a tutorial. All you need are napkins (Ikea's are terrific,) string and scissors. 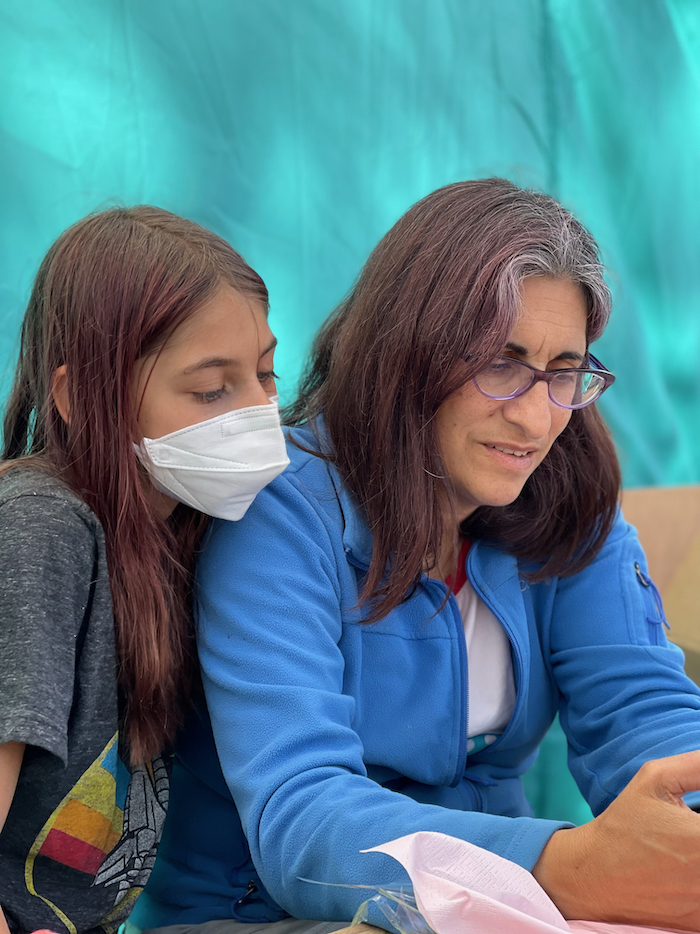 Here are Bex and Leslie... either looking up medieval dresses, or the address for the Indian restaurant that is so amazing! We were having some very good talks about amazing food places. 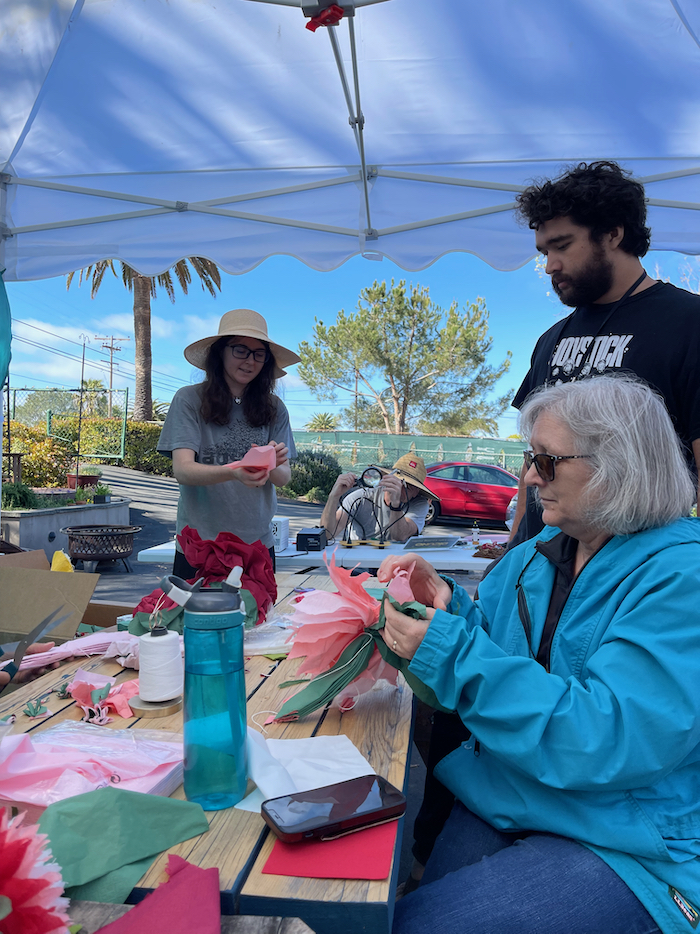 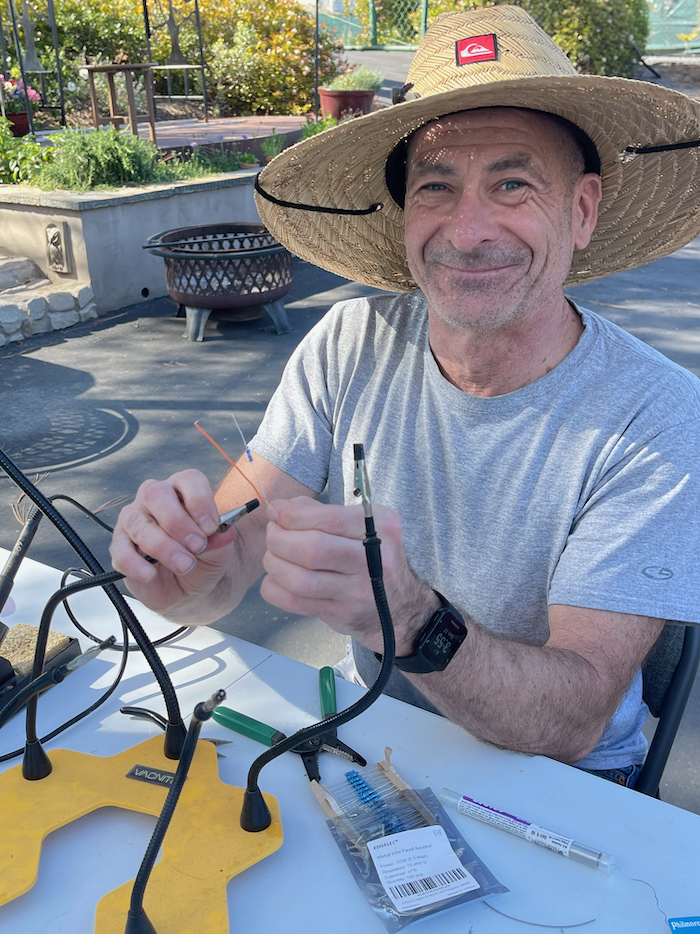 Gordon, soldering, and smiling. I am smiling back.
Bird House Notes: For the first time in 42 years, we are supposed to be able to see Northern Lights -aurora borealis, tonight, in San Diego County! Really?? It's pretty overcast in this corner of the county, and I wonder if we should drive somewhere and hope to get in the best position for seeing this event. What would that be, I wonder... the best spot and conditions? Even though this could be far far easier to accomplish than traveling to Iceland, it still feels kind of daunting... but am I going to kick myself if we miss the lights? Yes. Yes, I might be hugely bummed. April 1... hold on. This better not be an April Fool's prank. April Fools is cancelled. Seriously, what's funny about pranks and foolery after the 2016 election, a global pandemic, the melting ice caps? April 1, 2022 (Yeah. I fell for it... April Fool!)
Time for tea. No. Breakfast. Time for breakfast. I need it to be a Mexican breakfast, por favor! Machaca, like at the Hotel De Anza, Calexico. Beans, and tortillas, harina, maiz, hechos a mano, por favor. Cafe con leche. Chorizo con huevo. Una mordita de pan dulce. I am gastronomically homesick. Atole. April 2, 2022
Posted by Natalie, the Chickenblogger at Friday, April 01, 2022

The planters are looking so pretty, they made a lovely job of them. The paper flowers are great too, I love how everyone pulled together. CJ xx

Nicole, it was fun, and it helped a lot, too. I am thankful for the help!

Yes... the pulling together has been brilliant. We have generous friends, and I want to keep this in mind: that working together can make chores feel more like play. We are getting ready for a celebration, and I am so laser-focused on the day, but I am appreciating that these days are going to be as special, memorable and appreciated as the final event. And that is something to bear in mind for so many things we do in life... in other words: I should enjoy the journey, as much as the destination!