It turns out, ships really did have rams. Look it up. 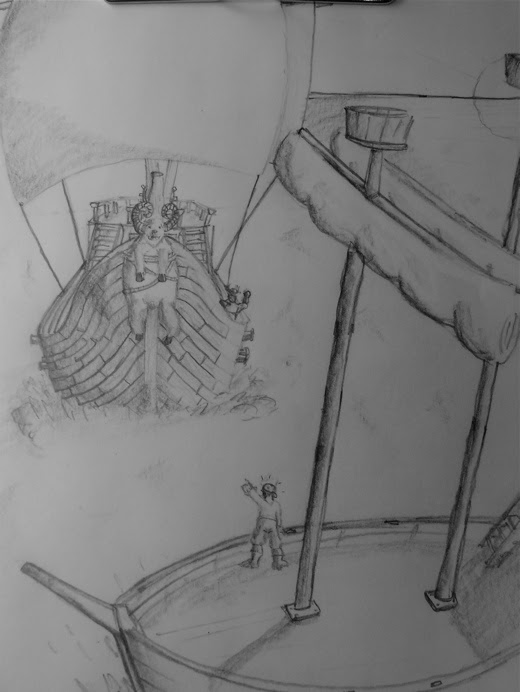 Here at Cramalot a lot of conversations are about life in medieval times, so it isn't surprising that just last week we were talking about medieval dinners, like mutton. We talked about eating without utensils, and drinking mead, and we made mutton jokes, which is what we were doing when William asked something like, "Hey, did they have rams on the prows of ships?" This was a non-sequitur, and as I was still thinking of mutton and other sheep, an image came to mind, that I immediately described to Alex and William. Naturally, I do not expect you to laugh as hard as we did (these sorts of hilarities rarely transcribe well.) So when we were nearly done busting up, I begged Alex to draw me a ship with a very large and hapless ram, not a beam of wood meant to forcefully ram another ship, but a wooly mammal in a tight bind.
Posted by Natalie, the Chickenblogger at Monday, April 16, 2007

Email ThisBlogThis!Share to TwitterShare to FacebookShare to Pinterest
Labels: Talent

You guys are such a great family. =)

We celebrated Maria's birthday. I want to remember to suggest she look over at FB, where friends left sweet birthday messages. I am not sure why, or what excuse I can make, but I feel as though I need one week per day to get things done, including a celebration. I am calling this her Birthday Week, and there may be a cake involved, at some point.
November 30, 2020
8:17 am
Yesterday Alex and Bambi dismantled the pumpkin bed... the logs are rotting and full of crawly things. We brought out all the hens and the goats, and the garden felt full, and lively. Alex, Bambi, and Max took turns at splitting what's left of the logs, and discovered aged fatwood. It smells beautifully of hard resin. William and I made small fires to test it. Fatwood lights easily. The hens made quick work of the crawly things, and the goats trimmed grass, leggy roses, and even snacked on wood chips. All the details are in my head, and I hope I can always recall what a very lovely time we shared.
November 28, 2020
9:52 am