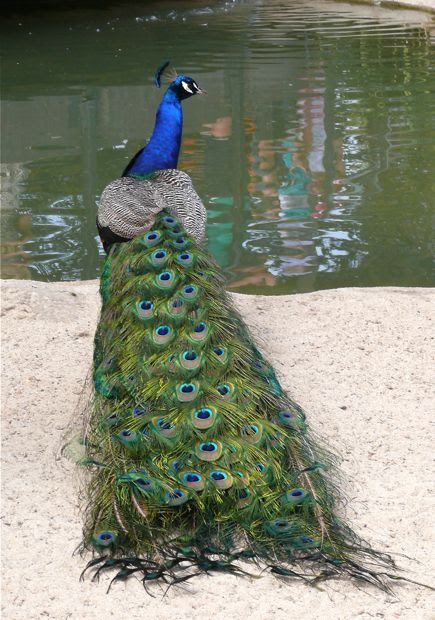 Maria is fascinated with rhymes, and sometimes she can make a rhyme, like mouse and house and sometimes not... tree and chicken. We're working on it. No, we are playing with it. She loves to recognize a rhyme, and I love that she enjoys the word play.

Another thing we are playing with is naming animals at the zoo. We were there last week. What fun. A cool morning, a blue sky and a world famous zoo just waiting to be rediscovered. 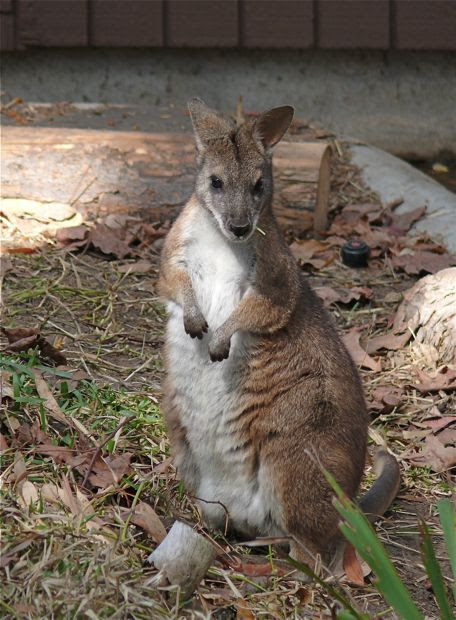 This is our blogiversary week. That is the anniversary of Chickenblog! Seven years. Seven years of rambling and reflecting. Seven years of me putting stuff out there and then getting really giddy when You write back. I still don't know what it's all about. I still feel like I am just figuring this Blog stuff out. I still have only eight cents in ad revenue and no idea how to make changes to my new and improved banner. That's okay. Chickenblog is comfortable and familiar, like a pair of sneakers you don't want to toss. Is that a good analogy? Sometimes Chickenblog feels like an outdated pair of sneakers, the kind most people wouldn't take a second look at or that I should be embarrassed wearing in public. Chickenblog is not the latest in fashion footwear, wildly popular and highly in demand. What's up with all this shoe talk? Yeesh.

Rhymes?
Zoos?
Blogiversaries?
The neighbor is using a jackhammer? 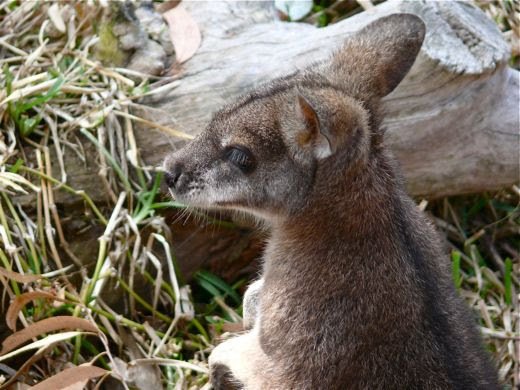 The neighbor is using a jackhammer. It's so close, I can almost imagine I hear my dentist telling me to open wider. It's so close it drowns out the cackling hens... now that's close! 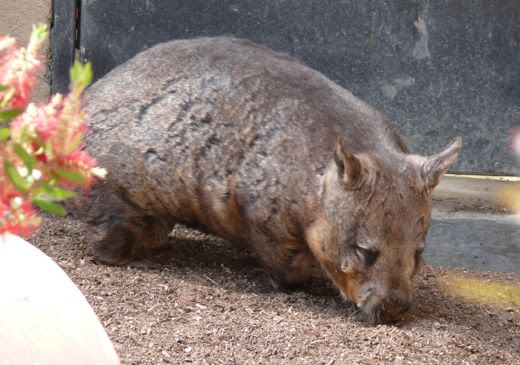 A lot of blogiversaries are celebrated with contests, prizes, giveaways. I've had some good ones. Good prizes. Good winners. Good times. I was thinking of having a name these animals contest, but eh. I guess I am just in that kind of mood... eh... sorta take it or leave it... whatever.

Do let me know if you recognize this guy though. I was totally taken with him. I want a home edition. I think he would be a great ottoman. I had no idea they are so big. Speaking of rhymes... I had a nickname that rhymed with his name... ______-Nat. That's your only clue. 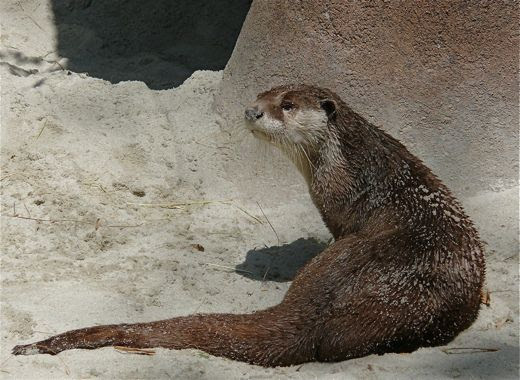 Actually I can still hear the hens. The jackhammer and the hens are going at it, and even with the windows closed the noise is decibels beyond comfortable.

I love this animal... he's an otto-something, but he would not make a good ottoman. I remember in school seeing nature films and the very best ones showed these playful guys sliding in and out of rivers. Movies at school... those were the best, and even film strips were better than paperwork and coloring in the lines. I also remember there was always one kid who knew all about the projector or the film strip player. The teacher always seemed relieved to have this geek helper around. I worked as an audio-visual technician in a middle school for a while. Yes, basically I lied and cheated for that job, and yet I managed to hold my own. 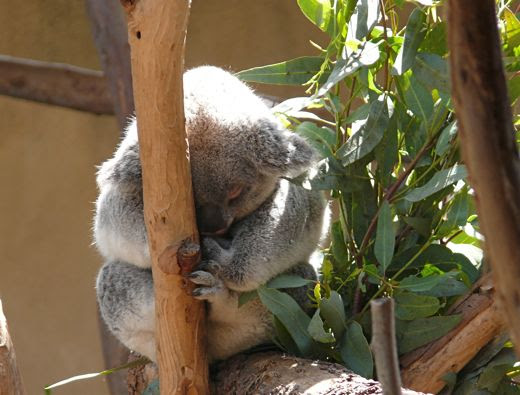 Did you sigh just now? Did you? Seriously, is it possible to look at one of these without cooing or wishing you could hold one, ignoring of course the fact that they have crazy sharp claws? 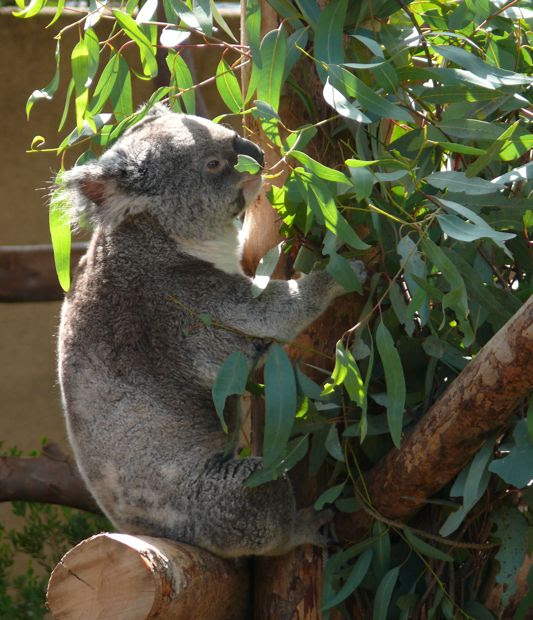 How 'bout now? They are so cute. It's ridiculous how cute they are. What if I had a blogiversary contest that went like this... the 100th commenter gets to hold this incredibly cute marsupial?! Eh. Not gonna happen. Sorry. 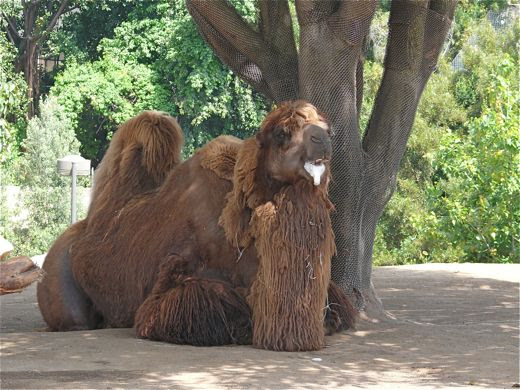 Here we go. This one suits me. Right here. Right now. I think about my troubles and I just start foaming at the mouth. Who cares? Whatever. I love this lady. Go ahead, ask her why she's foaming at the mouth. Ask her about her messy do, the wide hips, the extra stores of body fat. She totally does not care. Do you know what a Bactrian can do? And with good aim I might add 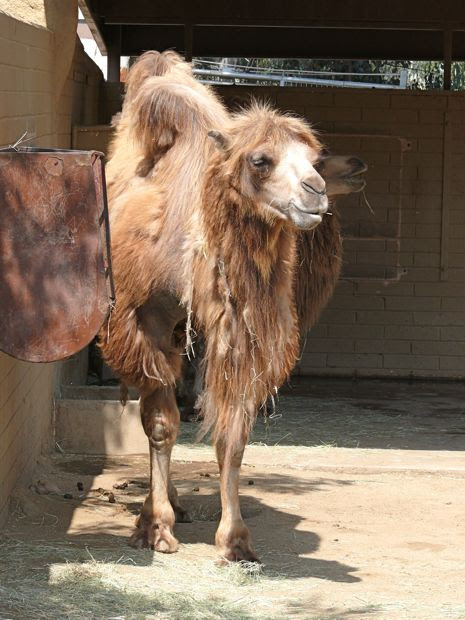 William forgot his notebook, so I gotta get that to him. And I think Max was supposed to take flowers from his garden to his teacher for teacher appreciation week. Teacher Appreciation Week. Never mind. Our Belgium hotel choice is not available, and the Swiss place is charging more than their website offer, no word from the London hotel, no idea where to stay in Germany... gotta remedy those. 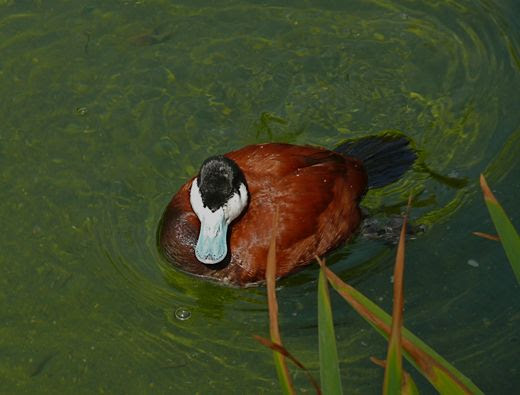 Anyone that wants to talk about the housing market or why I hate all most realtors, email me or call. Other than elaborating on the rampant corruption and ethical vacuum that is the Realtor World, I have no updates on our house search. 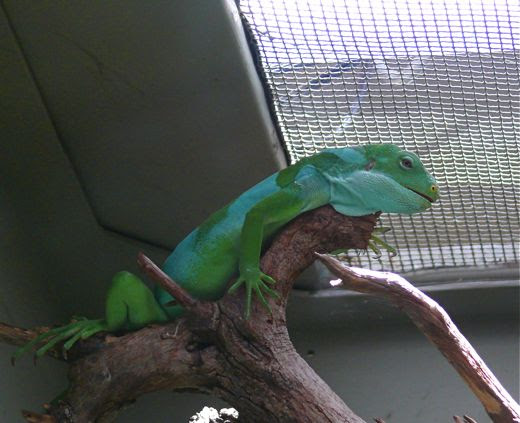 I know what that little cutie is!!! It's a Wombat!!!! And.... did the camel spit at you? I've heard they've got good aim, but have never seen one spit so far! We also have a wonderful Zoo here... I love visiting ours!

I saw one of your mystery animals at the zoo in Australia. :) They are so cute! They were one of my favorites for a while. Now the camel looks really impressive - I had no idea they were so big...

I love ALL the animals.

And I hate jackhammers... I endured one long, hot summer while they ran non-stop across from my office window. I had a choice: open the windows for a breeze and get the noise, or close the windows and muffle the noise a bit. (We were in an old building and couldn't count on the a/c.)

Hoooo, I know what you mean about unethical realtors - makes a person want to spit like a Bactrian camel!

And what kind of claws did it have? Oh yeah, crazy sharp.

I love hearing about what your family is up to.

wombat - so fat. they're quite tank-like aren't they. and not at all sociable. I'd like an otter to keep in a beautiful lagoon in my back garden - but I don't have one, so I can't. :-) hope the noise quietens.

They were very cute photos of the wallaby, the wombat, a koala, a camel and an otter before the green lizardy thingy.

The koala not only has wicked sharp claws, they are also notorious for peeing on unsuspecting folk who hold them, including politicians - they're not proud!

Hi again, it's been awhile, wanted to say hello. Come see me if you'd like. I have 2 blogs - All of Us and The Greenmama. Theresa

Seven years! Wow! Congrats! I love the trip through the zoo with you...the pics were nice too...I always enjoy your clear insights on things...thanks!

Did yesterday's second post make much sense? I started writing about incidental things from Portland that I am still mulling over, when one thing in particular became an obsession. I started blogging in real time, as I pursued what my heart wanted. In the end, like Mary from Colorado said, my antics proved one important thing: "There are good people everywhere!" I am so lucky to know many such good people. Thank you, friends, for reading, sharing, commenting, and being good and better in all you do. July 29, 2021 ********** Should I slow down? Today I buried my first post of the day, by writing a new post... the new one got so exciting, as I kept updating it in real time, and so I couldn't help hitting publish. No, I don't think I will slow down. I am enjoying getting good memories, deep thoughts and other musings written, and looking over pictures from our travels north, then home, again. It's all part of the fun to recall the good stuff, even the bits we wish we could have skipped... at least I can say I survived something, or figured out a better approach for next time. I just made a bowl of jicama with mango, lime juice and Tajín, like we had outside of Willits! It's so refreshing. I already have a post scheduled to publish tomorrow at 6 am! If I blog about every day of this trip, I will feel super accomplished! If I do some laundry I will feel super super super accomplished! July 28, 2021