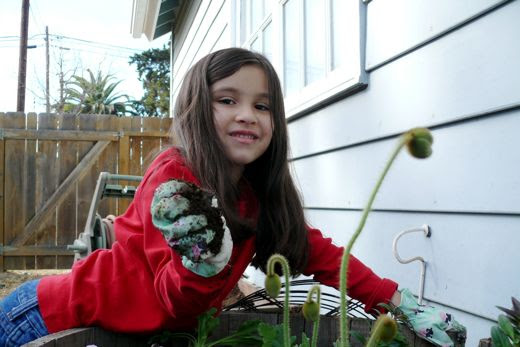 A few years ago Geoff sent me an article about the actual healing properties found in the garden... in the dirt. I love it when science and my beliefs harmonize.

Maria and I went to the garden center. We invited Max. He was very interested in planting seeds in his garden bed, but that was last week. This week he is not feeling the same way about things, which is understandable. He is hurting, and sad. He loves Ferris, his furry friend. I am not saying retail therapy is the answer to grief and longing, but I know that time in the light, time away from the usual, daily patterns, and creating an opportunity for getting dirty... those are a very good answer to sadness. 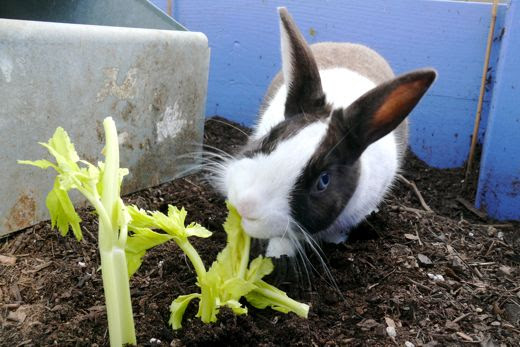 We came home with new flowers, like pansies and poppies. We bought more soil, and a special dark pencil for our garden markers. We chose seeds for our cold season... peas, cucumber, lettuce and spinach. We walked around admiring the trees and blooms, the prettyness of a winter day in Southern California.

I even managed to deliberately abandon all of the burdensome supposed to's that plague me when I am aware that I am not excelling on all fronts feeling like shiaving cream. While there may be "important" things being neglected, I gotta believe working in the garden is a huge improvement over FB gazing.

We got home and made the able-bodied men unload our wagon. After that I sort of reverted back to feeling the deep funk. I expect to see him. I look for him and call him... Ferris! Ferris, kitty-kitty! I even open doors, enter quiet rooms and think he could have been locked in here. This may be a place we forgot to look... Fortunately, something compelled me to rise from my descent, and get back outdoors.

Maria and I brought Sanka out of her house and set her in a raised bed. She was almost as melancholy and homebodied as me... she would not hop out of her box. But when I stuck some celery in the dirt, she could not resist. The rest of her afternoon was spent in happy digging, and contented nibbling. 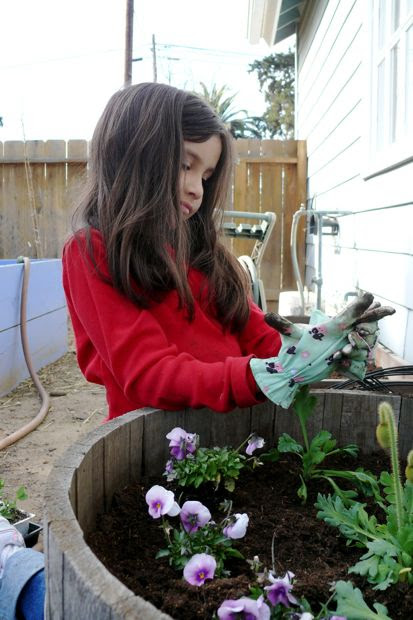 So often I feel really inadequate, very ineffective. I do. But reflecting on yesterday, I realize that a lot got done. We planted nasturtiums around the fruit trees. We put in rosemary and geraniums along the driveway. We planted a barrel with peas and violas, then weeded all around the barrels. We brought the ratty-rats out and gave their home a thorough scrubbing, then played with them in the sunlight. We scrubbed the watering and grain feeders for the chicas. We planted a second barrel with the poppies and pansies. And more... including a haircut for Maria. 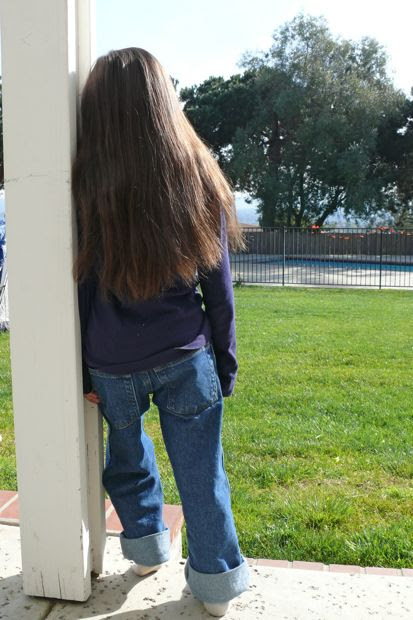 She has been asking for a haircut, at home, for some time. I finally got a new pair of shears, and we sat outside, dropping about three-four inches from the bottom. She is very happy with the results.

We were so dirty. Even with her new gloves, Maria managed to get good and grubby. And it felt great. We still have seeds to plant, and the chicas coop could stand to be raked out and freshened. The sky is blue. It is, no doubt, warmer out there than it is in the house... I think we should enjoy another round of therapy. And I plan on dragging Max out there with us, because if he doesn't believe me, I know he will trust the science: dirt heals.
Posted by Natalie, the Chickenblogger at Sunday, February 06, 2011

The garden store? You mean it is open all year where you live? We only have garden stores paet of the year. I know it really is spring when the stores start stocking stuff to plant.

That is one happy garden girl. Love the smile you've captured. Lots going on in your garden areas, even the half-barrels. They are going to be gorgeous with all that color. Happy spring!

I truly do believe that activity, and especially outdoor activity, is key -- helps to focus on other things, to feel and be productive, to get some sunshine.

I've always believed that it is good for kids to get dirty because it bolsters their immune systems.

I'm so sorry that Ferris has gone missing, and so soon after his last mishap. I do hope he's just out exploring the world and will be back soon. I'll keep my fingers crossed.

I feel so bad for Max.

Oh, my goodness... that photo of the bunny has me laughing--the expression is just so funny! Oh, Maria's cut her hair...wow... She's had it so long, for so long! She look so grown up in the last photo somehow... I can't wait for some dirt healing--come on spring! ;o) Happy Days to you all ((HUGS))

Tara... I was actually hesitant about admitting that we can garden any day, any time, that we live walking distance to a beautiful nursery, and almost as near to five others... not to mention the regular home improvement center, and even grocery stores that carry plants and flowers. I was sympathetic, because I know everyone in the real winter states are probably a bit stir crazy over the extra wild weather they are enduring.

But hey... you all should enjoy the break from weeding and snail battles, and gopher wars, from aphids, ants, slugs, rust, mildew, trimming, raking, pruning... come spring you will see time in the garden with a fresh and ready perspective! As much as I love those pansies, there isn't a day that goes by that the children and I don't enjoy a game of *what if it snowed?!*
lol

Nikkipolani... you know what I am talking about! Right? We don't get an off season, which is a blessing and... and quite a bit of year-round work! We filled our van with new seedlings, and naturally it was quite a bit, and yet what we planted does not amount to very much compared with the bare spots. Not to mention the neglected plants already in the ground. But as long as Maria is singing her farming song, and happy to be by my side, I am delighted to be preparing for more spring color.

Jennifer... it did feel good. I need to remember that work outdoors, even raking and pulling weeds, always leaves me satisfied. I can lose track of the time when I am in the garden.

Thank you Susan... I think I should get a haircut too. I knew exactly the lightness, the fresh start Maria was enjoying after her haircut, and now I want that feeling too.

Every time I hear a rustling in the shrubs, or see a pale blur moving in the periphery of my vision, I catch my breath. I still get up, go outside, and call for him. Max is sick, perhaps with grief. He misses his friend.

Judy... he needs his Ferris. He qualifies for a companion dog, because of his Apsergers, but he feels overwhelmed by most dogs, even therapy dogs he knows. His cat was *it* for him.

Tracy... I think of you when I am in the garden, and now I will think of you enjoying a laugh at Sanka bunny's funny face. Rabbits eating are definitely one of my favorite sights. This was Maria's third haircut ever. It always surprises me what a nice difference a simple trim can make, and like I told Susan, I think it would do me a world of good to lose an inch or three too!

Happy Days to all my friends, and thank you for visiting Chcikenblog... oh, you know what I mean!