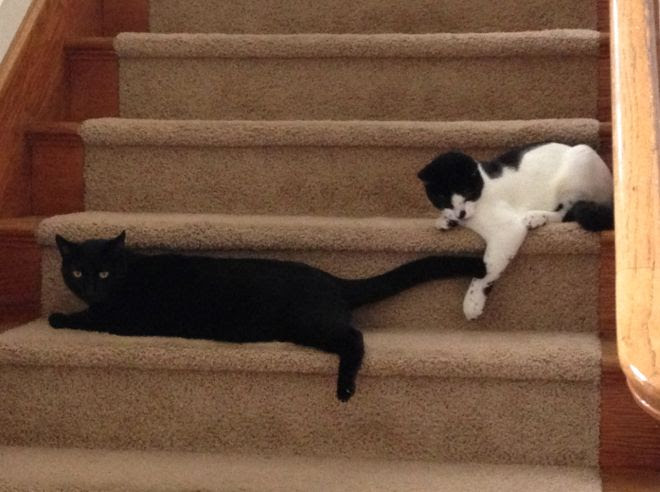 I think it is safe to say, Chango and Foo are friends.

Not BFF, or even bff. It's a little more tentative than that.

Chango allows Foo to chase him, he stops to let Foo bat his tail. Chango sleeps near Foo, and eats with Foo, and even refrains from walloping Foo. It seems as though, with Benjamin gone, Chango accepts that this little newcomer needs some patience, a little attention, acceptance into the fold, and so Chango plays with Foo, and is about as friendly as he can be. This makes me happy, for both of them.

1. We caught Inara... our escape bunny, who had us at her whim and mercy, stayed out two nights, and made herself almost impossible to return to the run, and her sweetheart, Malcolm.

2. William's vest is nearing completion, even after we decided to rip out the side seams and cut them again, trying for a better fit. Ahead: A lot of slipstitching.

3. William took a temporary job, and will be taking care of an amazing, eclectic, and even exotic collection of pets, including a tarantula, a snake, turtles, chickens, dogs, guinea pigs, fish, and a frog + more!

4. Maria got a haircut. Not a trim. A haircut... something she's wanted for quite some time. She looks happy!

5. The weather forecast calls for ten consecutive days with highs only in the sixties, and possible rain on Thursday! Fall, fall, fall. I do love fall, and rain, and clouds, and blustery, cuddly, snuggly weather!

Posted by Natalie, the Chickenblogger at Monday, November 18, 2013

1. Chickenblog.
2. Young prince went to Mexico with an incredible group and built a house in 1 day.
3. Concert with so many difficult songs is over. Hallelujah!
4. Seedlings in the garden look like turnips, beets, carrots, and quinoa.
5. FRC returns soon from Thailand with stories and photos.

Your good things, are good indeed.
#1. really made me feel thankful to you for your constant support and encouragement... from the very start!

Thanks for stopping by this morning, and I'm happy to make a visit in return. :)
Love the kitties, and that is a list of five really good things...things I would be very happy about!
Have a great day!

So much goodness! I've stopped by recently, written long, juicy comments, and then had them just disappear into the ether without posting. Sigh. Maybe you've felt the good vibrations? In any case, it's lovely to come here and read about all the goodness.

I'm cheering our forecast, too, from just east of El Cajon. I enjoy your blog.

Well, William certainly has experience with animals! I love your Mr Foo posts. Would that kittens would retain all their darling kittenish ways.

In lieu of moving to Portland, or buying the dreamy house in Lake Mills, Wisconsin, we have been making house improvements, and developing plans for an addition, here, at our very own Bird House. It's going well, if not as fast and simply as we'd like. The other day I convinced myself that a trip to Ikea was in order, since we need to add storage and organizing systems (I always begin with the second-hand shops.) It's been a long long long time since I've had the pleasure of wandering around Ikea, and I have to admit: I was 101% dazzled and beguiled! I was taking pictures, for reference, and to help me visualize the things and arrangements that make me say "Ooh. I wish I could do that, or make that, or create that, or achieve that." Left to my own devices, I feel like I have an entirely _too buckshot_ decorating/furnishing style. Now I am tempted to make a post, using pictures from my capitalist-consumer venture, and see if I can't learn a thing to two about my taste, goals, and even my missteps. Just now, though, I am thinking of going back to the realtor listing for that Lake Mills house... sigh. October 21, 2021 ************************* What if I won a lottery? I could live a year in Portland, Oregon, or Portland Maine, or Paris, France. And I'd bring friends along, and we'd be neighbors, and we would walk to markets, garden centers, to museums, theaters, parks, bistros, cafes. We would paint in the woods, bath in rivers, and be friends of all the shop keepers. We would host parties, picnics, soirees, teas, and sleepovers, and every holiday would be marked with seasonal flair and appreciation. I feel better having a plan, just in case. October 16, 2021