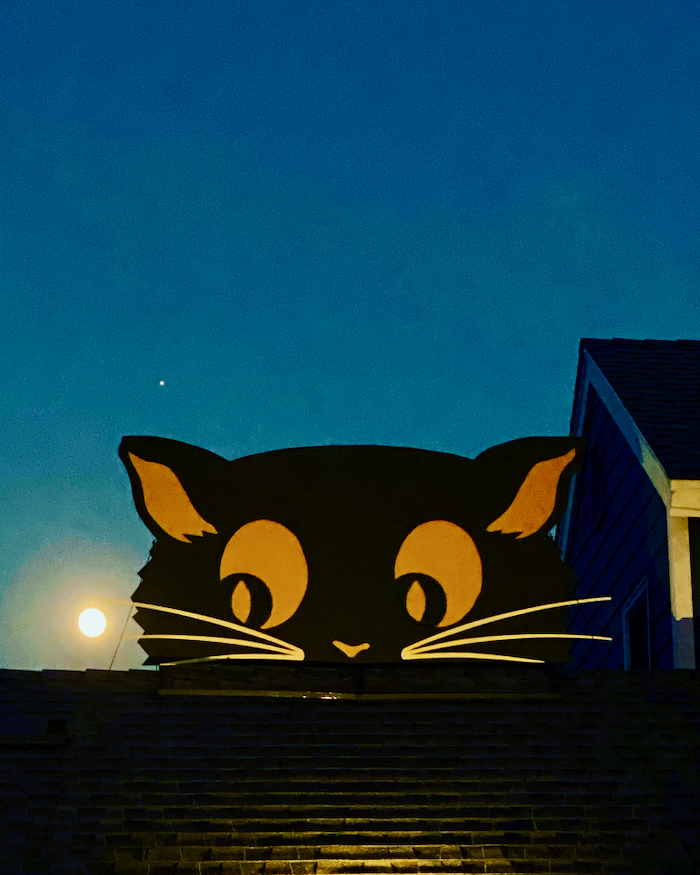 The Blue Moon is almost here, Mars has been bright and glowing, and we have a giant kitty, Minnie Robo Kitty, peering over everything, and everyone, from the roof of our home. It's almost Halloween. It won't be like others, but we have plans! We can't be sidetracked, and certainly not derailed. We have been sharing movie nights, and whimsical decorations outdoors. Tomorrow night will be a Halloween like no other, but that's basically true of every holiday. As this is a night for make-believe and mischief, we are rising to the occasion to devise new and safe ways to play, to be with friends, to celebrate creativity, and amusements. Minnie came along, in the usual fashion, in coversation. We couldn't help imagining something big on top of the house, and we talked about this all summer. Once we settled on a cat, William started sketching. Then he took all of our ideas and suggestions into the computer, where we made a silhouette to project onto wood. He and I traced the cat, then William cut it out with a jigsaw. Projecting is a helpful method... just remember to adjust the image, to get rid of distortion. It can be a bit tricky. It's the same process we used to create our giant Totoro. Here, I have more details about making, and remaking Totoro. 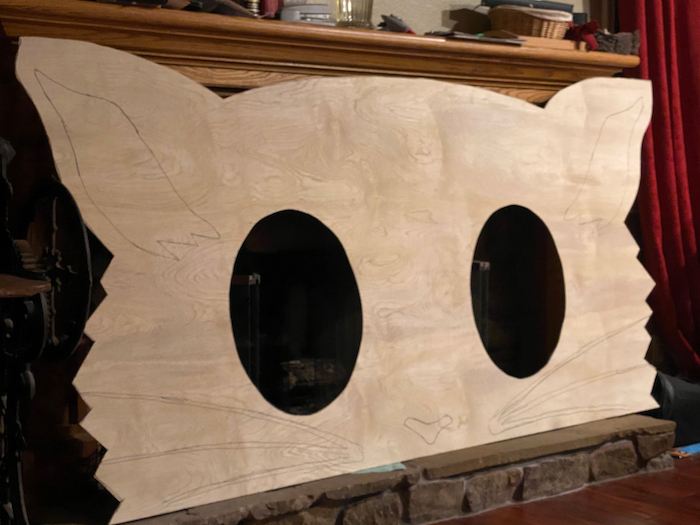 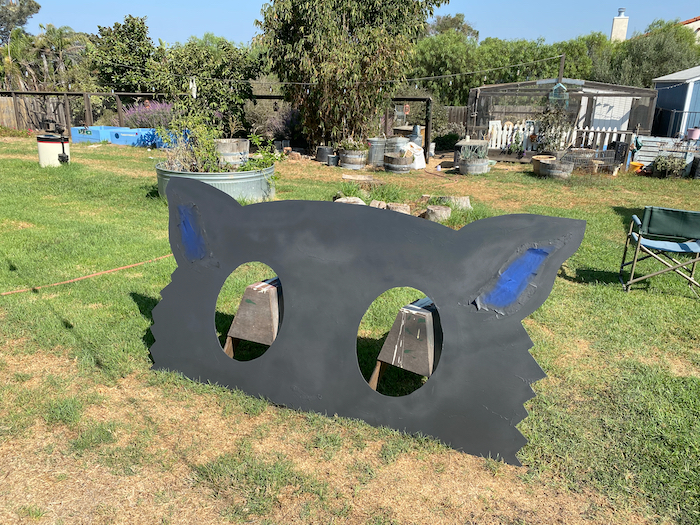 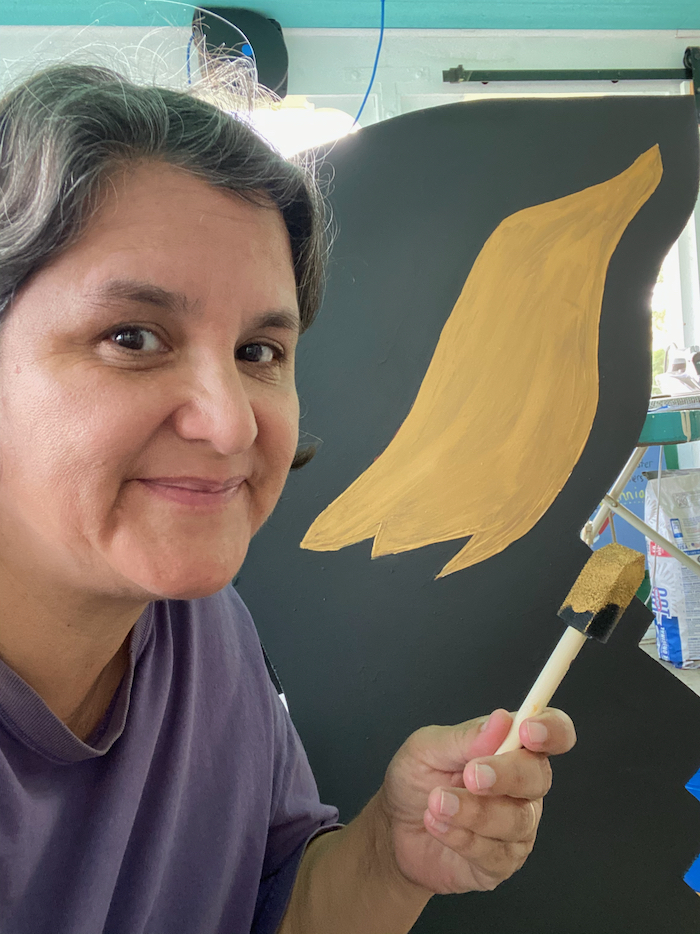 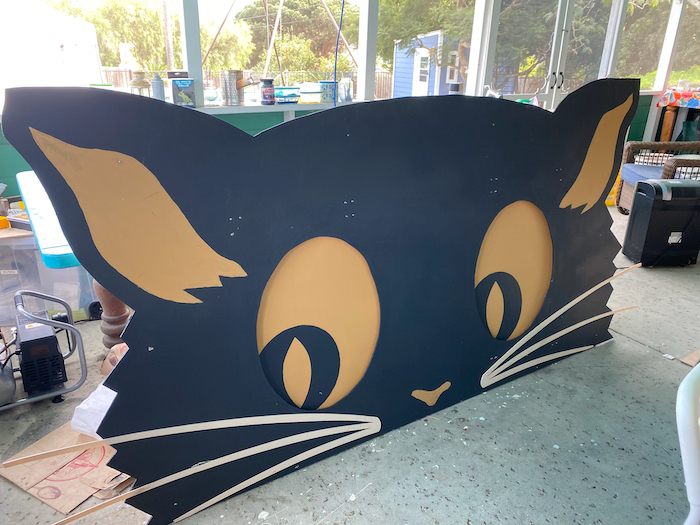 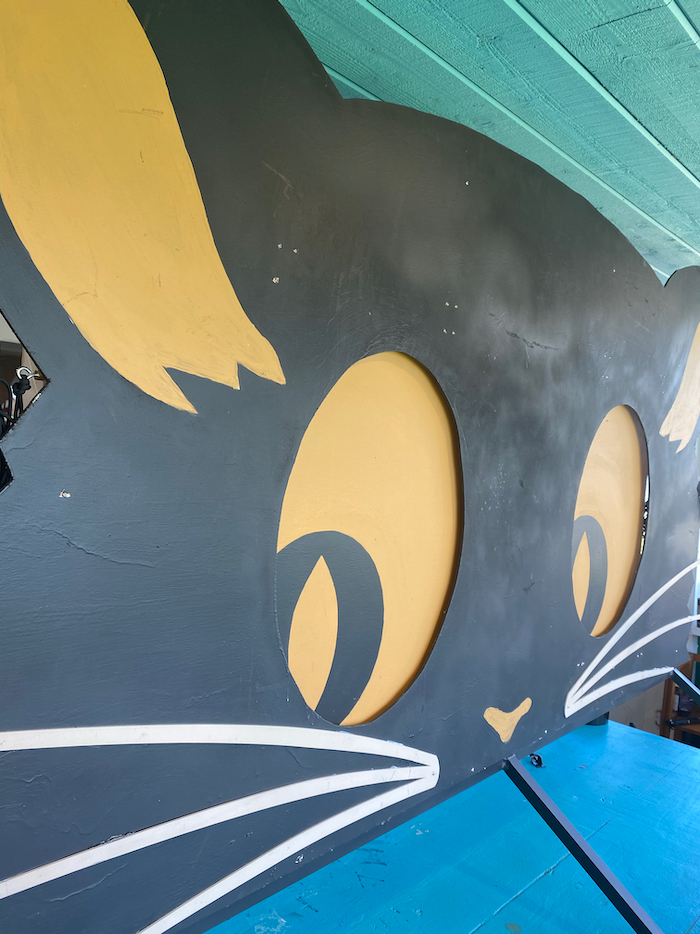 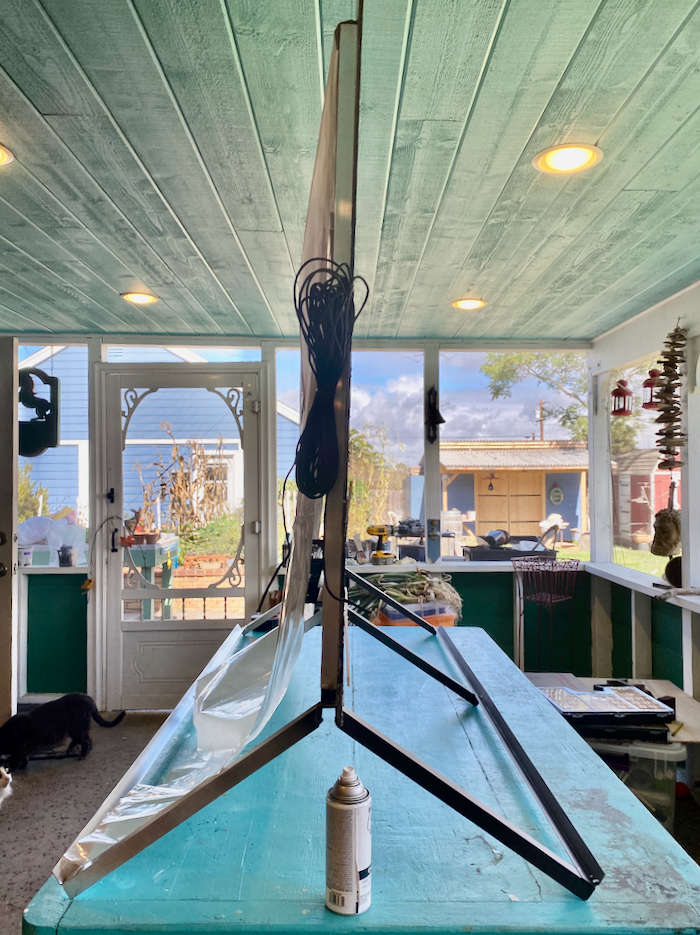 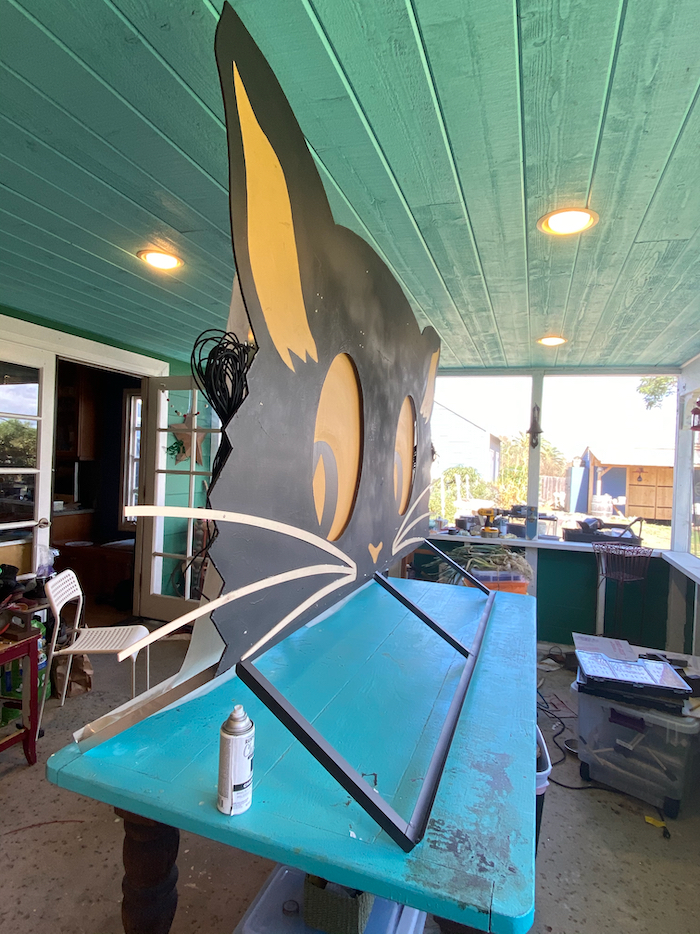 Friends know, we've made some elaborate things... competitive robots, robot parade floats, shelters, costumes, theater props. This project was tough. Our roof is steep, Kitty is heavy. We wanted the eyes to move. I could say more about the complications and challenges, but just know: We wanted to throw in the towel a few times. And all along, facing each new technical obstacle, we knew the trickiest part would be the last part... getting it, safely, on the roof. Kitty has 3D printed parts, and laser cut parts, an Arduino that Geoff wired and programmed. The metal frame had to be welded, and made to fit the exact pitch of the roof. Sooner, or later, we employed most of our collective skills sets, and eventually, all seven of us would have a hand in seeing this project to completion. 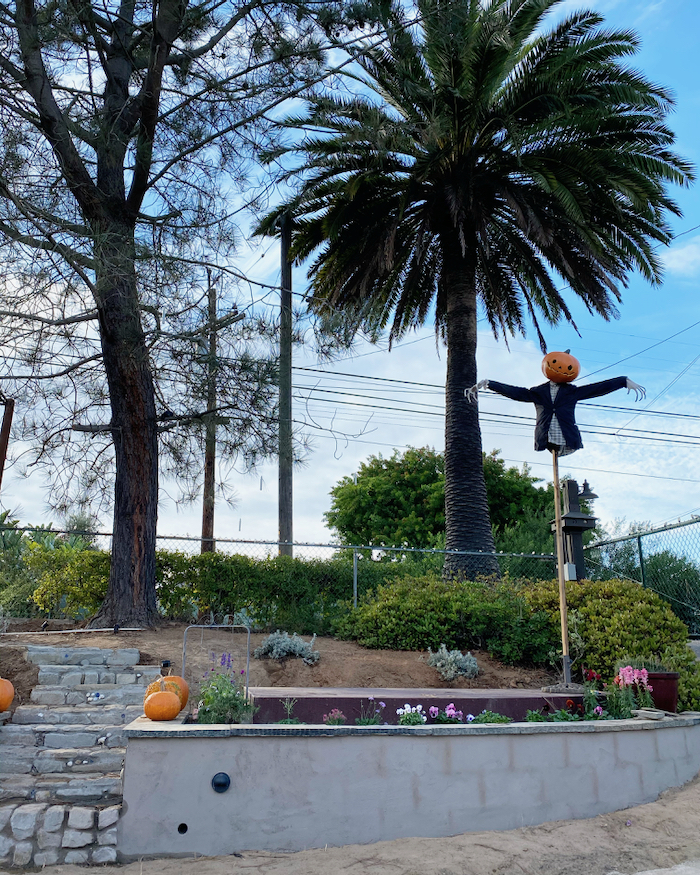 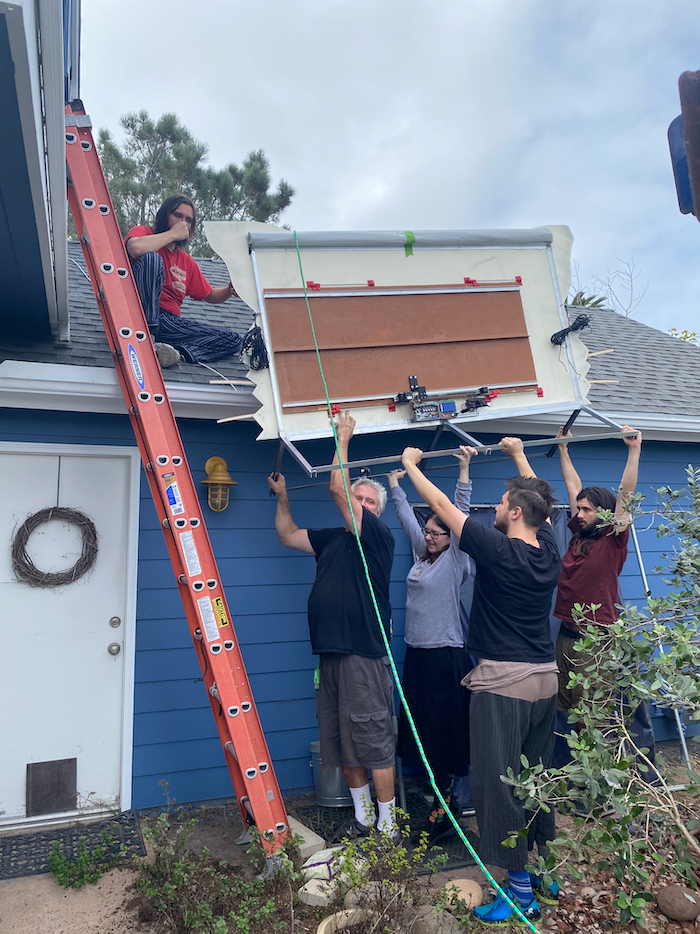 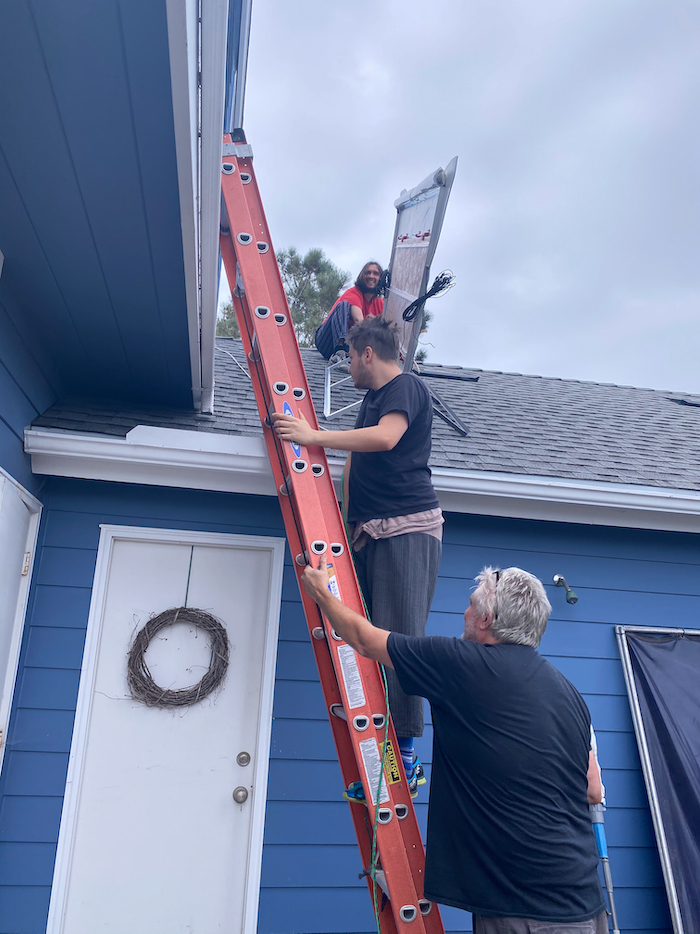 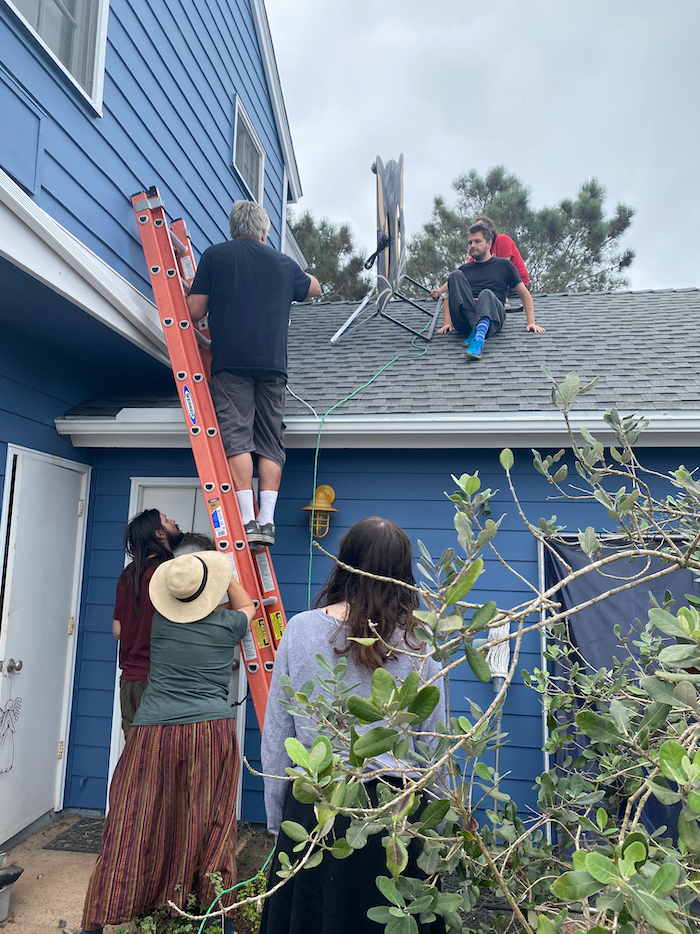 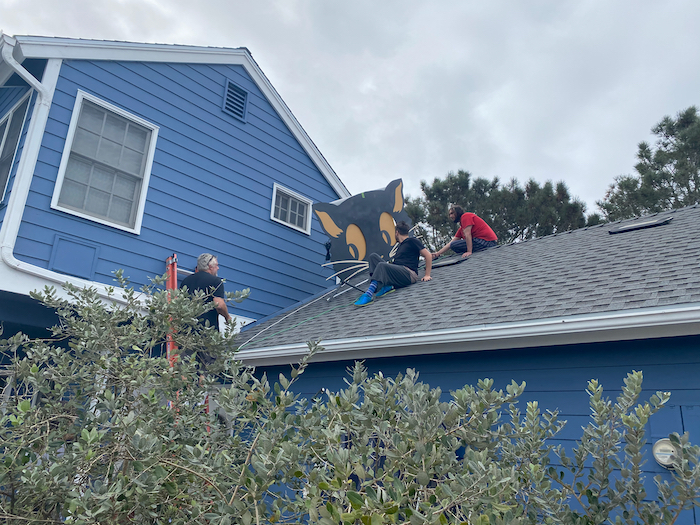 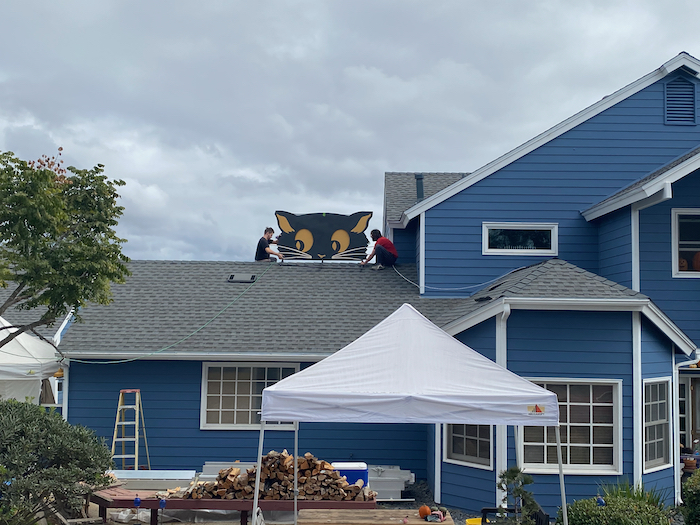 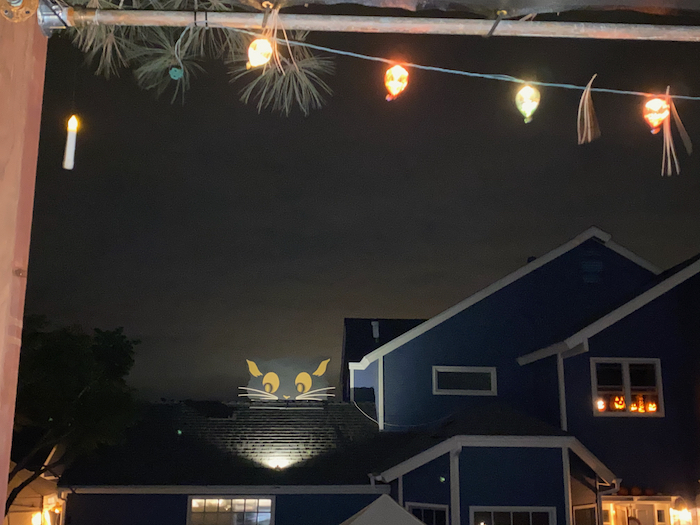 Making Minnie was challenging. Getting the cat on the roof was harrowing... or, at least, very intense for at least 20 minutes.
Dear Santa, we hope you are well. Please, would you consider giving us scaffolding? We find ourselves on roof tops, as well as building tall or heavy, or odd things, rather often, and something tall and stable, for standing on, could come in handy. Thank you, the BOoM Nerds.
All week I was on the lookout for rain in the forecast. You know, I am always on the lookout for rain in the forecast. But we did not want to put the cat up in rain, or high wind. And we were also trying to figure out how to protect the mechanics and electronics from rain, or even heavy fog. There was never rain in the foreacast. It was all clear. Only, as soon as the last guy wire was tethered, and Minnie was secure, it did start to rain! And the next day we had freak wind gusts that lifted things across the yard, and broke a few things. Thankfully, Minnie has stayed tip-top!
Posted by Natalie, the Chickenblogger at Friday, October 30, 2020

What a great group effort, and fun project. And evidently well-done, to withstand the elements. The cat is beautiful and striking and certainly unusual. I wonder if you will get a lot of Halloween traffic when the word gets out.

Glad you persevered. Love Minnie. Her presence is somehow comforting. Happy Halloween to all!

Ruth, yes. That's a good word for her. She is comforting. It was nice to see, when she was set in place, she became more than a decoration. She's got personality, and we are happy to have her around.
Happy Halloween.

Thank you, GretchenJoanna. It is a tremendous relief that she's staying put. We have had to replace bearings, and when she comes down, we will probably consider milling metal parts, if the 3D printed ones got worn. We hope she's amusing passersby. At least she's making us happy!