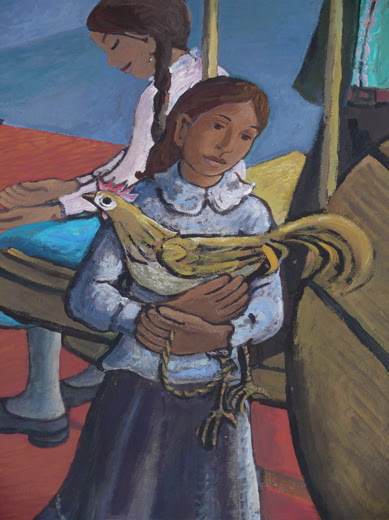 "The Blessing of the Animals" by Leo Politi, is a mural on Olvera Street, in Los Angeles. I was there when the artist was painting it. I was just old enough to appreciate that he, Leo Politi, must have been terribly special, that he was allowed to paint on walls. It was a quiet morning on the busy street and I can still feel the sense of awe at watching him use a brush and paint to bring the scene to life.

On our way north, the children and I visited Olvera Street. It was my first time back, since 1980-something. I found it remarkably unchanged. Considering the way things can deteriorate, I should maybe even acknowledge that Olvera Street has perhaps improved. It's still a bustling spot of genuine Mexican and American history. It is still full of stalls selling cheap and trendy souvenirs and kitsch. There were also more traditional wares than I remembered, and the Street had managed to gain a distinguishable measure of pride, a sort of coming of age that accepted the commercial along with the cultural. Or maybe it's just me, coming of age. 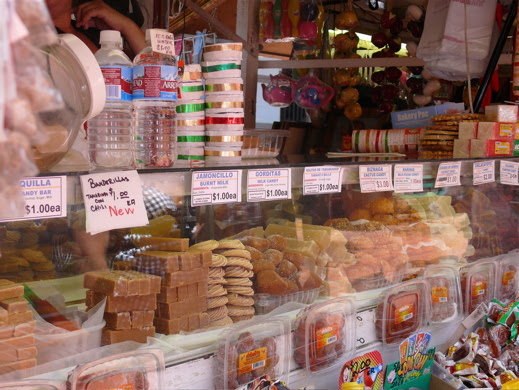 It's strangely, sweetly, reassuring to find a once familiar place to be still very familiar. The narrow street with shops on both sides and overflowing vendor's booths down the middle, still displayed the sights I've known since earliest memories, like marionettes, toy guitars, maracas, Lotería, and dulces like cajeta, and chile covered sweets. Seeing it all, is almost like gazing into a market in Tijuana, Guadalajara, Oaxaca or Puebla. Almost. 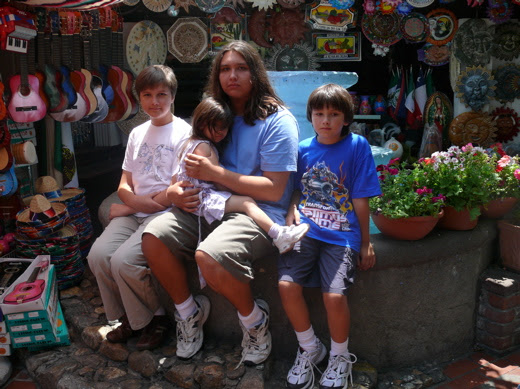 Seeing this picture, I don't want to say anything. I want to sit down and hear my mother tell me about Olvera Street, East Los Angeles, the River, the rails, the church and her memories. 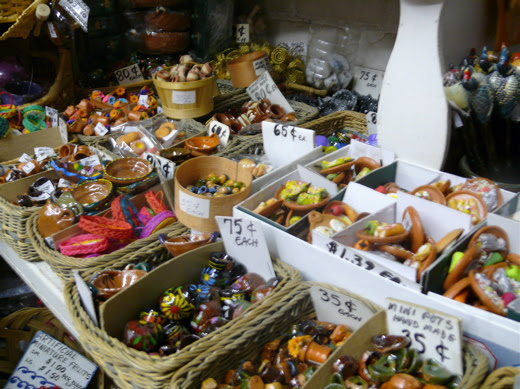 My memory is of aching to have baskets full of these little cantaritos and tazas and cosas. These were my favorite toys. Little clay jugs and mugs and tiny kitchen tools. 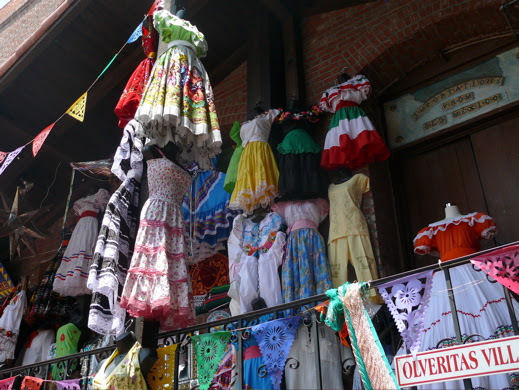 I would have loved to look like pictures of my Abuela Eunice in her falda and blusa, like a beautiful, modest and flowery señorita. I am still in love with the romance and femininity of full skirts, lace trim, and embroidered blouses. Sadly, they are not made with same care and attention to detail. Just the same I bought Maria a pretty blue dress with flowers and birds embroidered around the neck and down the front. 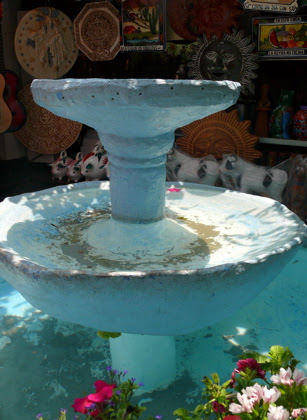 I remember sitting on this fountain's edge, with my cousins, Julie and Debbie, enjoying icy, syrupy raspados. 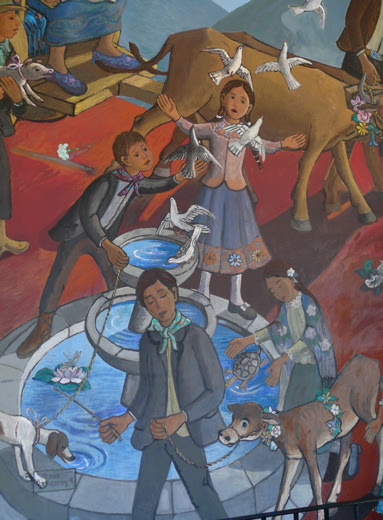 Art can evoke memories and longings, a desire to be a part of a community, a family, a culture. For a few years I felt like I belonged on Olvera Street, it was familiar to me. I feel fortunate that going back was pleasant and enjoyable. 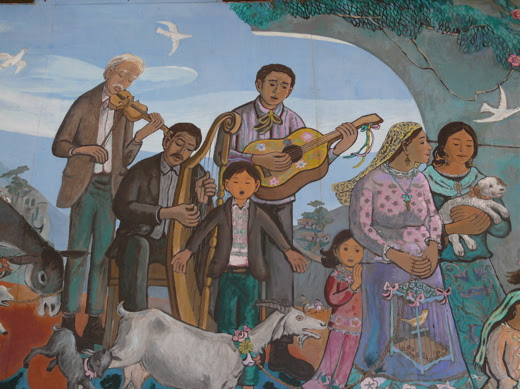 Posted by Natalie, the Chickenblogger at Friday, July 13, 2007

What beautiful pictures you are sharing with us.

Looking at them I feel I can almost soak the culture in,even though I am well over a 1,000 miles from there.

I am so glad you had the chance to take your children and revisit this place that holds so many memories for you.

You share some of the most beautiful pictures, and even though I visit often I know I am in for a treat...

Thanks for the art and history lessons. I want to go there!

Natalie,
What a treat your blog is. It makes me homesick for California. I grew up in the San Joaquin Valley. How wonderful that you were able to go back and have things feel so familiar. Can I add your site to my own blog?
Thank you for sharing.
Laney

Thank you for sharing your memories, your history, your family and places with us ((HUGS)) I feel we are there with you--drinking in all the sights, sounds, scents & tastes...

It's so nice to read your comments. Thank you for all the feedback.

Anna Banana... Olvera Street is literally across the street from Union Station, so it's a simple Amtrak adventure.
Laney, you're thoughtful to ask about linking and I would like it if you did... I couldn't get to your blog from your link, so I hope you find my message here and we figure out a way for me to find your blog.

The best part about blogging are all the new friends and connections!

What a wonderful place. I can't believe you saw the artist painting the mural - a part of your history! I'm positively aching to have myself a whole set of cantaritos & tazas and cosas. They're adorable! Your memories have also sparked a memory for me - when I was in grade school a teacher gave me the tiniest little clay pot - perhaps it was one of these. I got the idea that it must be something special so I kept it for years.