It is, it is a glorious thing to be a pirate king!
Or queen! 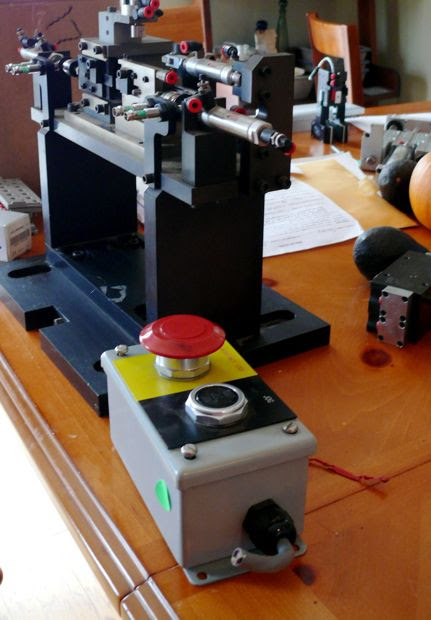 Yes, it be here. Sure as rum, it really and truly is Talk Like a Pirate Day, and I have assumed the role of Pirate Queen!

I made the scallywags clear the decks of me galley, and the SS Odyssey, so there be no more plunder laying about. But remember I, the Pirate Queen, presented a challenging contest in that post, and the idea was for you to be identifying the flotsam and jetsam mucking up me rudder. Only eight mateys were friendly enough to step forward and reply, and of those eight, two of yous were brave enough to make good guesses... so you two have loot to claim!

Judy, you clever lass, "the red thing" is an "easy button." Truth be tellin', it be a stop button on an assembly line, but I figger any button that can make somethin' stop is got to be an easy button. Your share of the treasure is a moving picture show based on a proud pirate history. 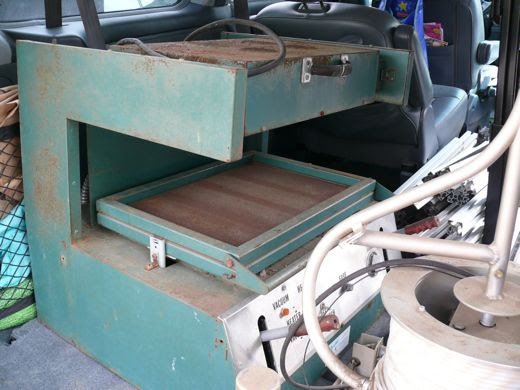 Em, you are a daring matey, and no one came closer than you to guessing what this green thing is. Almost "a press," it be a paper molder for making forms out of paper or plastic... things like pirate masks, and pirate swords, and pirate robot parts. Your share of the treasure is a moving picture show based on a proud pirate history.

Now, I hear me parrots crowing from the poop deck, so it must be time for this Pirate Queen to be ordering the scallywags to look lively... our course is set for learnin', and swabbing the decks, then maybe later we can drop anchor, and play as pirates do, with laughter, merriment, good company, and good food.
Posted by Natalie, the Chickenblogger at Sunday, September 19, 2010

Email ThisBlogThis!Share to TwitterShare to FacebookShare to Pinterest
Labels: Only A Game, Play, The Blog, Web

So cool! I am not a good pirate talker! I wish I knew how... need a pirate dictionary I guess! We will be swabbing the decks and doin' some learnin' today also (I have a TON of homework to do today!) Thanks so much! It looks like a fun movie!!!

What kind of socks do Pirates wear?
Arrrrgyle !

Bravo on this post! You make a mighty fine Pirate Queen {and thanks, you gave me my first laugh of the day when mentioning the poop deck. Ya, I guess I'm that immature that the word poop made me laugh.}

Yay! I love Kevin Kline, too! Thank you!

So sorry I missed Talk Like a Pirate Day! Now what will I do for fun this week?!!