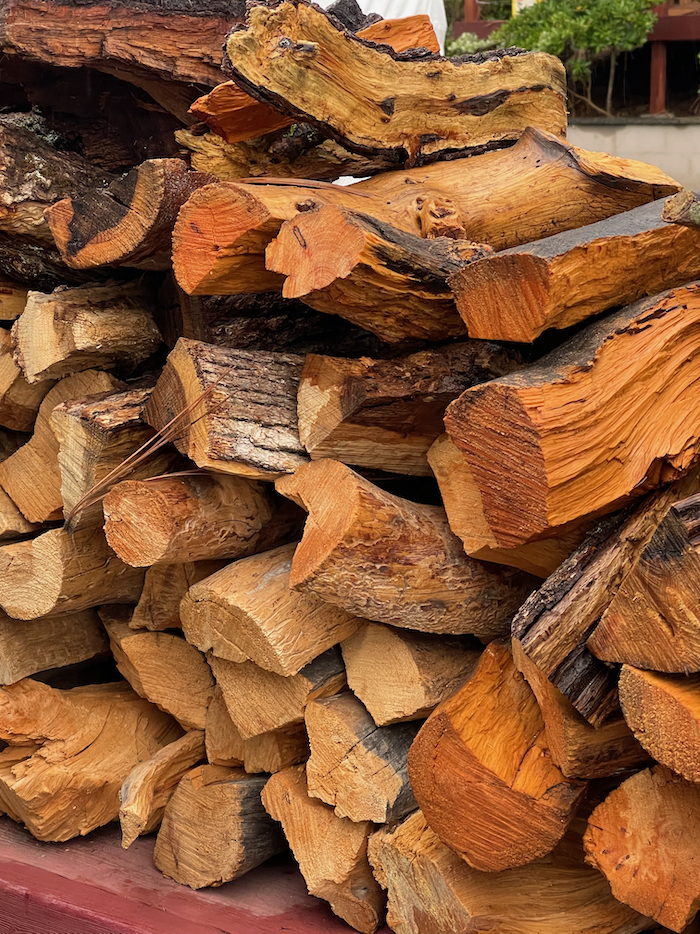 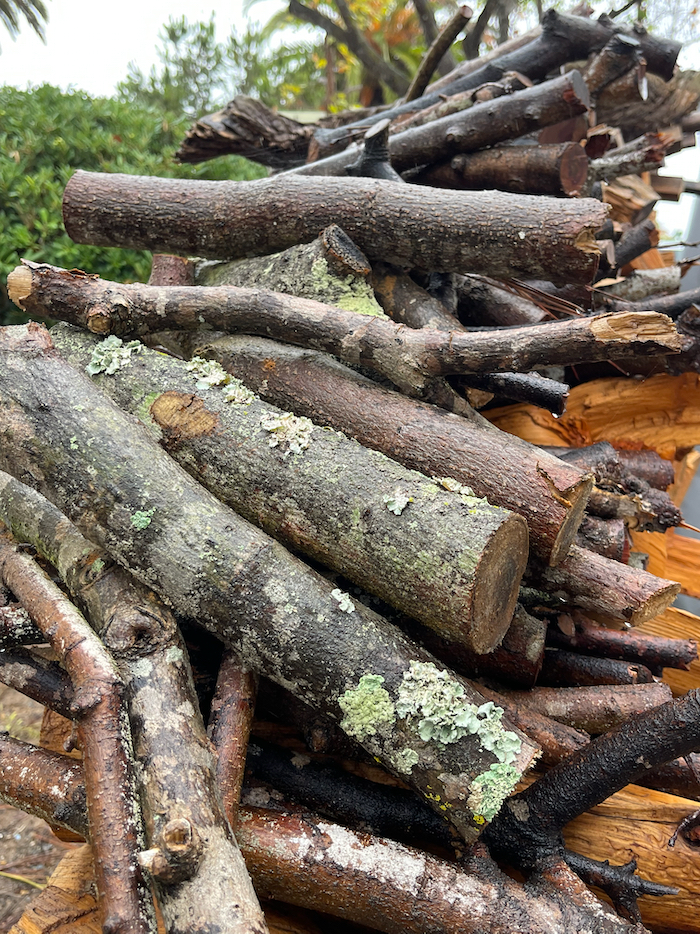 Our cat, Cairo, slipped out the front door this morning. He is always employing some tactic, or other, to make an escape. Saki and Feynman are happy, thankful, to be indoor cats, but Cairo fancies himself a woodsman, an explorer, and naturalist. We know better. Our great outdoors are no place for a floof nugget wiht soft feet, and inflated confidence. There are too many coyotes, bobcats, and fast vehicles for any small pets to be safe. I followed him around, in the light rain, as he gingerly picked his way around shrubs, and damp leaves. He chewed on blades of overgrown grass, and sat beneath the woodpile. I wasn't in the mood to chase him, so I just quielty tracked him, knowing that a big truck was due to arrive at any minute and the sound of four tires on the driveway would most likely send him running to the front door. My calculations were accurate. And I had a brief, yet worthwhile meditation on raindrops, stacks of beautiful smelling piñon, the soft light of a fall morning. Mike arrived, his work truck following the curve of the asphalt was muted, slow, but enough of a concern that Cairo dropped low and scurried to the door, and in. 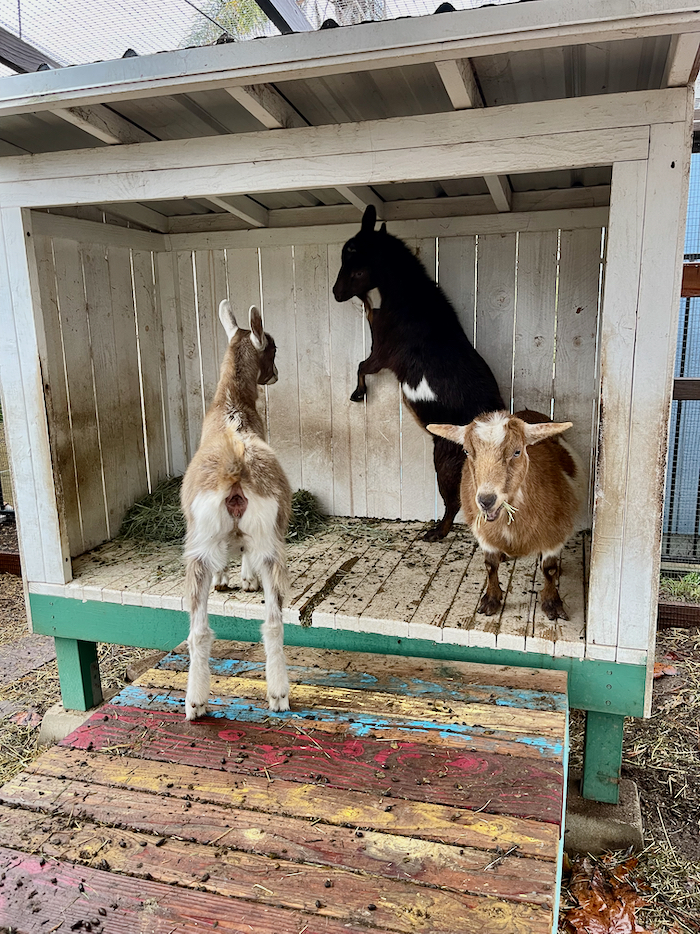 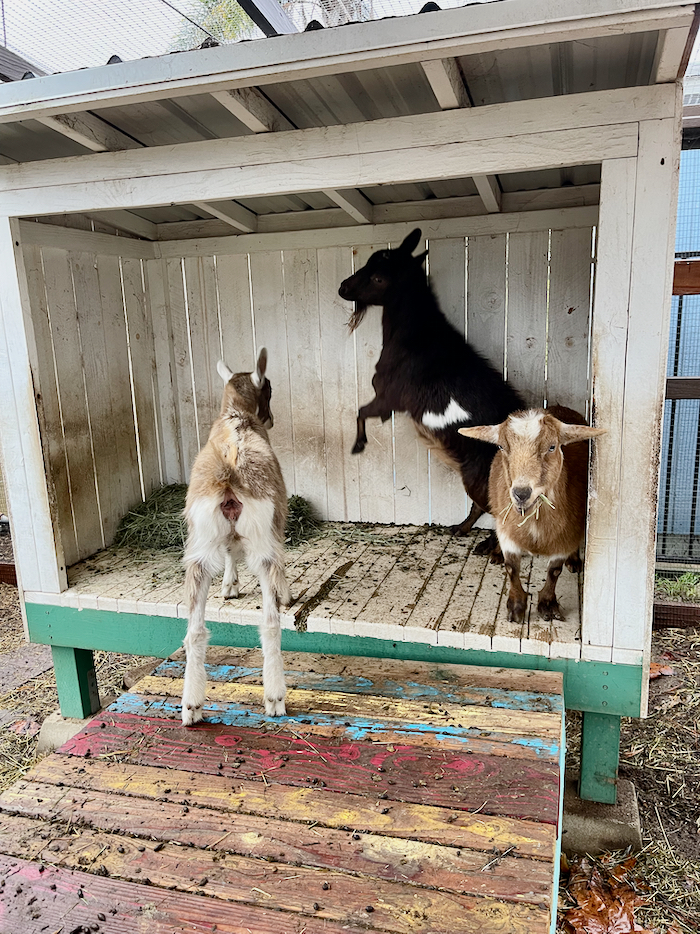 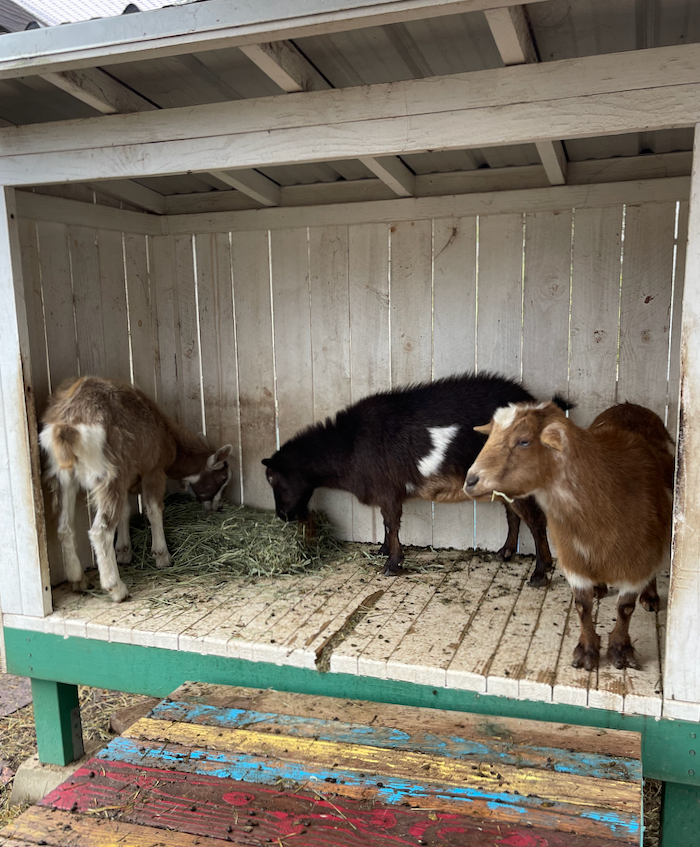 Rainy day breakfast for the goats. I didn't ask the goats to stand in the rain to eat their hay, and instead served them in their shelter. Ada, staying out of the power struggle between young Grace and Tasha, looks unfazed. Smart goat, staying out of the fray. The issue was settled, breakfast resumed. The sun will reappear tomorrow, and I think the goats will appreciate that.
Our favorite handyman has returned! New projects have commenced! Plans that have been turning in our minds for months, are taking shape. I ordered tile, you guys! And. More hints? A bathtub, two sinks, some faucets, and I went and picked up a tankless, electric water-heater. What else? We had already ordered a door, and two windows. And good thing, because they took months to arrive. And, up until yesterday, we were scrambling to move stuff. Move trash out, and rearrange essentials, and dismantle a few things, in preparation. Mike does great work, and he wastes no time jumping in... whatever our vision, he smiles, nods, and says, "Ok. Sounds good." Last year, he gave us improved outdoor space, and a fresh look for our kitchen. This year, some bathrooms are getting tlc, which they are much in need of. Since Geoff is away, I am the boss... kidding. Well, not, but there's no bossing to do, and I can rely on Mike to do everything well, and safely. He even picked up hardware for the door, and I did not have to think twice about choosing, and that was priceless. I know Geoff is going to like what he sees when he gets back here. I know we are all going to be appreciating the home improvements coming to the Bird House. Is anyone going to ask what color tile I ordered?
Posted by Natalie, the Chickenblogger at Friday, October 08, 2021

Yes! What colour tile did you order?!

I have had a look back at the other work Magic Mike has done on your beautiful home, and I am now very excited to see what comes next. He is a true craftsman.

I wish I had someone like him in my life. I have been trying all year to get a reliable person to replace the flat roof on our extension. Builders are inundated with work in the UK at the moment, and no-one is interested in doing such a modest job. "I'll get back to you", they say, as they drive away, never to be heard from again! Last week I gave up waiting, climbed out of the landing window and crawled around on my hands and knees (very scared of heights) to apply a thick coat of roof repair paint. Hopefully that will get us through the winter without any leaks and I can start looking again in spring!

What color tile did you order?

Thank you! Thank you, for asking about the tile color. And I want to, not only, blurt it out: Green! But also show a picture, except, I am at the stage of design when I have a spell of remorse. Either I am bringing together bold and sensational elements, or I have been home, isolated, and out of touch for too long! Ruth, I wish I had your skills for home decorating and design. I love how beautiful your home(s) always look... sophisticated and comfortable, personal. You have a gift. At this moment I am scared to pull out pictures of each element (floor tile, bath surround tile, and gym locker... yeah, I am not kidding) and place them together for review. I have sort of done that, but maybe not as much as I should have before placing the order. I am thinking the critical thing that needs to bring it all together will be the paint.

Mike does magic! And I understand the struggle about finding someone like him. In fact, the one thing we have learned is that because he's good, we have to be patient. We once waited four years before he could return! This time we have been in line since his last visit, and thought he would have been here in June. So. I have to put it out of my mind and know that at least when he does arrive, we are super eager and appreciative! The very first time we hired him, was to repair damages from a flat roof leak! You were very brave to tackle yours, and I hope it holds 100% until something more permanent can be done.
Another thing I hope... that green bath tile, and black and white floor tiles look amazing together, because just now I am thinking I went a little too daring!

I had been wondering if the tiles would be green, or blue, or greenish-blue, just based on the gorgeous colours elsewhere in your home. I am picturing green bath tiles and black and white floor tiles and thinking it will definitely look amazing, especially with all the individual touches you will add. Trust yourself and your choices. It will be beautiful.

I love this vote of confidence! Thank you! I made a photo layout with four of the big features... the floor, tub wall, lockers, and white tub, and I think everything is hanging on the wall paint color choice! So, I need to get very particular and mindful when it comes time to choosing the paint!! Also, I am deeply subscribing to the design idea that small rooms can be bold!

The bathroom plans sound awesome. You're definitely more of a risk-taker with paint colors, but I always love your choices. I gravitate to S-W's most popular colors. (It's sad, really.) I'm also somewhat restrained by my need for symmetry, a mostly monochromatic palette, and a further compulsion to find the best craftsperson who has no need or desire to advertise. I'm glad you were able to wrangle Mike. Be bold and carry on!

Aw, thanks for the compliment, though.

Thank you, Ruth. Sometimes I feel like I am being paint daring, but then I have also hesitated and waffled for years and years, like when we were choosing house paint for the outside!
Your taste and choices are flawless, in my consideration, and I am taking notes: "Symmetry, monochromatic palette." I notice these qualities and want to emulate them, and I think at best they help me reign in my wilder compulsions! I have yet to zero in on what my style or taste or attractions are... I get excited about everything... Bohemian, French Countryside, Cottage, Mountain Cabin, Craftsman, Bungalow, Farm house, Hacienda, Industrial-Loft, Tree house... probably anything except Minimalism or all white and metal. At least I am having fun!